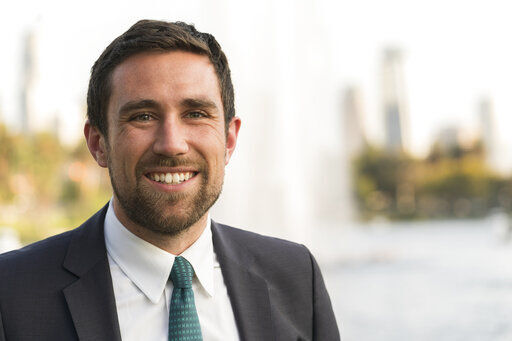 FILE — In this Friday, Aug, 20, 2021, file photo Kevin Paffrath, a candidate for the upcoming California recall election, poses for a picture at a campaign rally at Echo Park Lake in Los Angeles. (AP Photo/Damian Dovarganes, File)

Until the campaigning got serious in the recall election that unsuccessfully targeted California Gov. Gavin Newsom, this state had not for years heard very many new and creative ideas for solving its many problems.

But suddenly during the recall, the air was full of them. Sure, the campaign season saw a lot of old ideas rehashed, but there were also new thoughts.

On water shortages, the usual bromide solution has long been “build more and higher reservoirs and dams to capture more rainwater and snowfall runoff.” That idea got plenty of airing during the campaign among the 46-person corps of wanna-be replacement governors.

But there was a new idea, too, this one coming from YouTube financial advisor Kevin Paffrath of Ventura. Build a tunnel across most of America to bring Mississippi River water to parched California. That, he said, could relieve the Midwest’s frequent flooding while also slaking this state’s never-ending thirst.

Never mind that the idea was quickly and legitimately laughed off because few of the many states en route would agree to host a massive new pipeline tunnel, while most states along the big river’s path would object to losing any of their water.

Still, it was a new idea, the first fresh thought in California water circles since the late Los Angeles County Supervisor Kenneth Hahn campaigned in the 1970s for towing calved icebergs here from Antarctica and then draining their melt into the state’s water systems.

For sure, both ideas are more inventive than merely enlarging reservoirs when there isn’t enough water available to fill them at their present capacity.

Democrat Paffrath, who finished second among replacement candidates, showed more moxie than other hopefuls by crashing some of his rivals’ rallies. He also had other creative ideas. Example: make non-violent criminals do unpaid public service work right where they committed their crimes, like cleaning streets and painting over graffiti. He also advocated paying students over 18 to finish high school and attend college or trade school and proposed a two-week limit for granting new building permits to developers willing to pay for an accelerated timetable.

And he suggested tunneling under existing roads and freeways to create more capacity and ease traffic.

These might not all be practical ideas, but they were refreshingly original.

Most Republican replacement hopefuls were far less inventive but still expanded on older ideas, like former San Diego Mayor Kevin Faulconer pushing to clear much more deadwood from forests to give wildfires less fuel. Never mind that this interferes with natural forest life cycles. Faulconer also wanted to let parents decide whether their children should repeat a school grade level because of learning lost in remote teaching during the pandemic shutdowns and he advocated holding utilities more responsible for damage from wildfires they cause.

Celebrity candidate Caitlyn Jenner advocated reviewing all state regulations and eliminating any that have outlived their usefulness. This sounds good, and ex-Gov. Arnold Schwarzenegger tried it, but it did not fly, almost most regulations remaining in force.

And Green Party candidate Dan Kapelovitz advocated ranked-choice voting, now used to avoid runoff elections in local elections in Oakland and San Francisco. This saves money and time, but produces weak, unpopular mayors in both cities. He also advocated full personage status for animals, arguing that if court decisions like Citizens United can give corporations such standing, why not animals? Voters were left to wonder how animals might exercise their freedom of speech.

Some Republicans like Board of Equalization member Ted Gaines wanted to overturn the 2014 Proposition 47, which lowered many former felonies to misdemeanor status with little or no punishment. But like any voter initiative, that law can be overturned by another public vote, if that’s what the voters want.

Plenty of candidates advocated more affordable housing, but none even mentioned the obvious solution of converting the billions of square feet now idled in office buildings whose former workers now operate from home.

It added up to one of the most free-thinking campaigns California has seen, with far more interesting ideas raised than in “normal” elections.

Maybe some versions of these ideas would actually work. That possibility can be tested in the regular elections coming up next June and November.

Thomas D. Elias: The last recall of its type?

Thomas D. Elias: Newsom survives, but may be weakened

Placing an economic cost on refusal to be vaccinated has helped California take the lead in combating the pandemic, columnist Tom Elias says.

FILE — In this Friday, Aug, 20, 2021, file photo Kevin Paffrath, a candidate for the upcoming California recall election, poses for a picture at a campaign rally at Echo Park Lake in Los Angeles. (AP Photo/Damian Dovarganes, File)