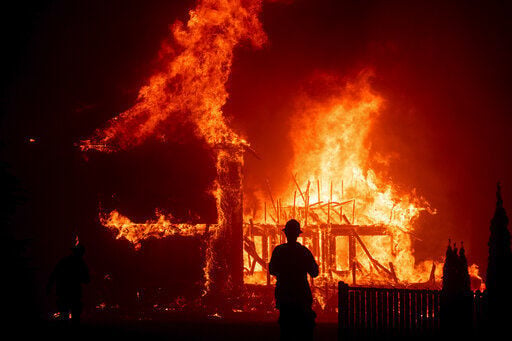 A home burns in 2018 as the Camp Fire rages through Paradise.

The utility bailout plan known as AB 1054 has looked worse and worse for consumers since California legislators passed it in July 2019 under pressure from Gov. Gavin Newsom and lobbyists for Pacific Gas & Electric Co., Southern California Edison and San Diego Gas & Electric.

The typical residential electric customer has paid for more than a year toward an eventual total of $13.5 billion to be used for reimbursement of costs when utility company equipment sparks fires, something common over the last five years.

Consumer lawyer Mike Aguirre, the former elected city attorney of San Diego, from the start, fought this shift of responsibility for illegal conduct by the utilities. But legislators never held hearings on the bill, concocted by an ad hoc committee that included Marybel Batyer, then a Newsom aide and now president of the state Public Utilities Commission.

How surprising was it that the PUC with Batyer presiding followed by quickly rubber-stamping this years-long dunning of the vast majority of California electric customers?

Aguirre protested SB 1054 at every step. He insisted it amounts to “unconstitutional taking” of consumers’ money. A federal district judge refused to hold a trial on Aguirre’s constitutional arguments, claiming an alleged lack of jurisdiction over state laws.

But the customers’ day in court arrives at last on April 12, when the appeal from that judge’s ruling is due for a hearing before the federal Ninth Circuit Court of Appeals. The wheels of justice have ground slowly: it’s taken almost two years since the law’s passage for the case against it to get its first courtroom airing.

That case seems strong. For one thing, there is no doubt the utility companies desperately wanted this bailout to pass. For it to take effect, they had to pony up $10 billion to help bankroll the new state new Wildfire Fund created by the law. They do not casually put up that kind of cash, but this time found it necessary: Without the Wildfire Fund, the criminally convicted PG&E could not have emerged from a long bankruptcy it underwent after causing deadly fires in 2017, 2018 and 2019.

Questions arose at that time over whether PG&E deserved to survive, especially after it pled guilty to manslaughter in the 2018 Camp Fire that destroyed the town of Paradise and killed at least 85 persons.

Says Aguirre in his appeal brief, “Instead of reforming its safety practices, PG&E sought a legislative reprieve. After receiving millions of dollars in campaign … donations, legislators and even California’s governor aligned themselves with the company.”

He goes on to detail secret meetings between PG&E and top Newsom aides, including Batyer “to determine how to ensure PG&E’s customers, not its shareholders would pay for PG&E-caused fire damages.”

Aguirre calls those Newsom’s aides “compromised.” He adds that AB 1054’s “true purpose” is not to ensure good electric service, but rather “to promote utility company finances.”

In fact, since it passed, there has been no talk of further utility company bankruptcies, a common subject every fire season for several previous years.

Aguirre argues that Newsom and his allies “pledged customer funds … even though utility companies acted unreasonably and imprudently in causing fires over decades.” He charges that the PUC under Batyer “held a sham proceeding in which the process was illusory and the decision (to ratify AB 1054) was predetermined.”

Batyer has refused to answer questions about any of this.

Aguirre notes that rather than reforming their practices, utilities have “caused more fires and killed more people – all while (PG&E was) on federal probation for the 2010 San Bruno gas explosion that killed eight persons.”

For sure, AB 1054 amounts to a show of trust for utility companies that by their own admission behaved irresponsibly for many years. The district judge’s refusal to hear the case has so far meant no one could cross-examine Newsom or other drafters of the bill about their motives.

One favorable outcome for consumers would be for the appeals court to throw the case back to the district judge for a full trial.

Another would be for the bill to simply be ruled unconstitutional. Once the appeals court hears the arguments, it will have to say something.

Historical revisionists are hard at work today, not just in California but all over America, columnist Tom Elias says.

Thomas D. Elias: This recall could become Newsom vs. Trump

The state Supreme Court appears poised to thwart the will of California voters on the cash bail system, columnist Tom Elias says.

A home burns in 2018 as the Camp Fire rages through Paradise.