If Republicans are banking on the fall recall election against Gov. Gavin Newsom as the key to eventually recovering their status as a major force in California’s public affairs, perhaps they had better guess again.

That’s the clear implication of the latest voter registration figures released the other day by the state’s top election official, the appointed Secretary of State Shirley Weber.

The numbers do show a bit of a bounce for the GOP, up 0.6 percent — that’s three-fifths of a percentage point — from 2019, the state’s last year without a scheduled general election.

But that slight gain — the first for Republicans in many years — did not come at the expense of Democrats, who gained 3 percent in the latest numbers, fully five times as many new registrants as the GOP. Rather, the Republican gain stems from a decline in voters refusing to state a party preference, now at 23.7 percent of all California voters, a drop from their previous 28 percent.

The results of registration drives by both major parties leave the Democrats at 46.2 percent of all those registered, the party coming closer to majority status than it has in generations.

Slight as they appear, these changes carry vast implications for the recall because they involve many thousands of voters. Republicans became less popular in California than ever before, even if they did pick up a few more registrants.

As a result, the GOP-inspired recall would need an almost unanimous yes vote among all non-Democratic voters to reach a majority. That’s very unlikely when no-party-preference (NPP) voters in past elections broke sharply toward the Democrats and against Republicans.

The numbers also emphasize the need for Newsom and his allies to keep all major Democratic figures in line and off the list of potential replacement governors that will be part of the two-question recall vote: one question will ask whether voters want Newsom dumped, the other who should replace him in case voters approve an ouster.

Also clear from the registration numbers is that the 2020 election, for the most part, a referendum on then-President Donald Trump, saw more voters take sides between the big parties, rather than gravitating toward the middle as many did over the 10 years since California adopted open primary elections allowing all voters to back any candidate they like for a given office, regardless of party.

With a smattering of American Independent, Peace and Freedom, and Green party adherents among the non-Democrats now registered, Republicans would likely need a strong turnout of their own voters going unanimously pro-recall, while also getting virtually all NPP nods in order for the recall to fly. Plus at least some Democrats.

Yet, there are Republican strongholds in California that strongly favor the recall. Lassen County in Northern California is one. The GOP gained 6 percent in registration there over the last two years, now holding a 3-1 margin. But that county has just under 31,000 residents, many of whom signed Newsom recall petitions.

This gives Lassen less than half the electoral clout of the small Los Angeles County city of Bellflower, for just one example, and demonstrates why Republican dominance of rural areas never gives them much of a policy voice.

All of which means Newsom is probably safe in this fall’s vote, and likely will emerge even stronger for his probable 2022 reelection run.

Even though almost all Republicans detest Newsom, few fear him in the way Democrats and some others were terrified in 2020 of a second Trump term when he would know he would never again need to face the voters.

That fear was one significant reason why a fair number of formerly NPP voters declared a choice between the parties.

There is no such factor at work in the recall, and the presence of Republicans only on the replacement governor list would likely make it certain that almost no one but registered Republicans votes to fire Newsom.

Which is why the latest voter registration figures bode poorly for the GOP not only this year, but for many more to come. 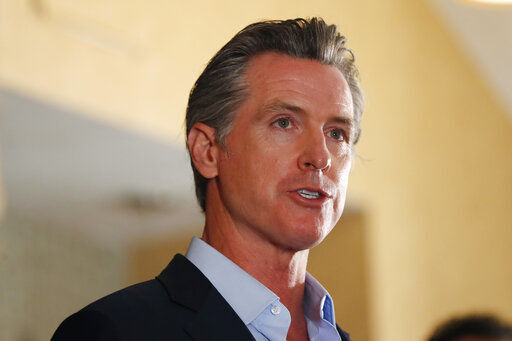 FILE - In this Tuesday, May 11, 2021, file photo, California Gov. Gavin Newsom speaks at a news conference at the Kearney Vista Apartments in San Diego, about a $12 billion package bolstering the state's response to the homelessness crisis. A fading coronavirus crisis and an astounding windfall of tax dollars have reshuffled California's emerging recall election, allowing Democratic Gov. Newsom to talk of a mask-free future and propose billions in new spending for schools and businesses as he looks to fend off Republicans who depict him as a foppish failure. (K.C. Alfred/The San Diego Union-Tribune via AP, File)