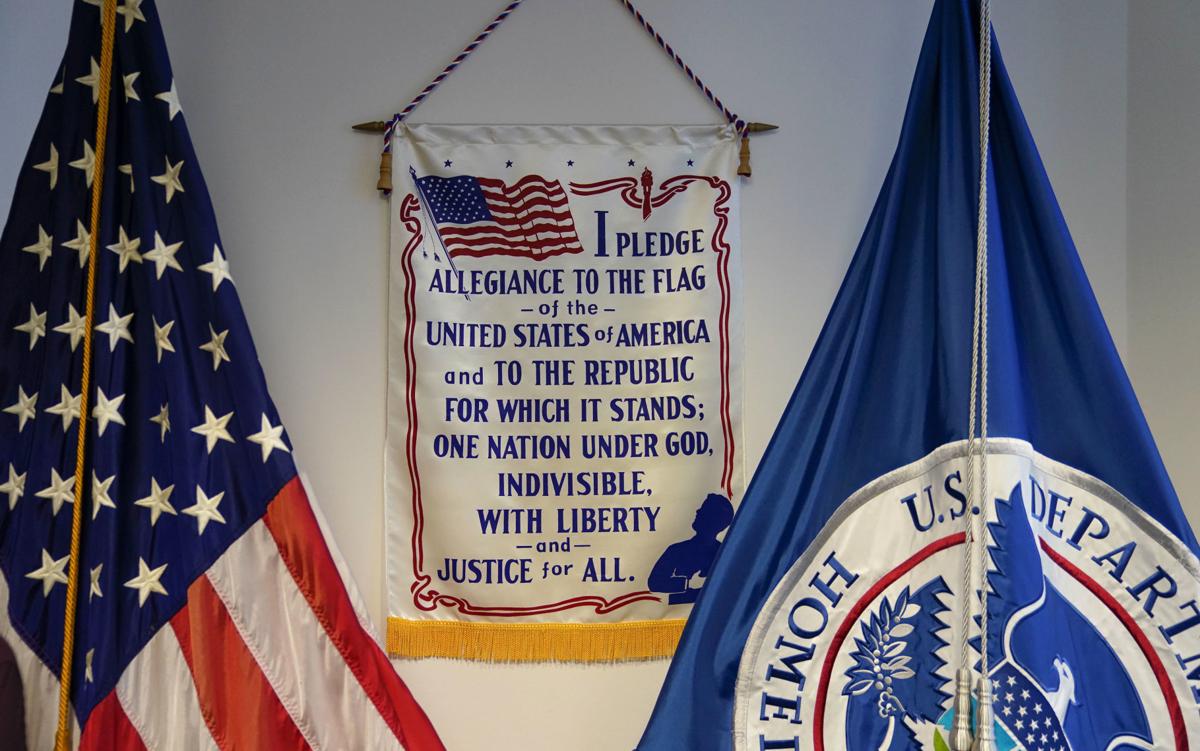 The Pledge of Allegiance is located at the front of the room where 106-year old Maria Valles Bonilla will recite the Oath of Allegiance for a naturalization ceremony at U.S. Citizenship and Immigration Services office Tuesday, Nov. 6, 2018, in Fairfax, Va. Bonilla is from El Salvador and it was her late husband's dream to become a U.S. citizen, so today she became a citizen for both of them. (AP Photo/Pablo Martinez Monsivais)

The same sort of panic that hit California’s Latinos after the 1994 passage of the anti-illegal immigrant Proposition 187 is now hitting many of this state’s almost 6 million ethnic-Asian residents.

Latino fears in the wake of Prop. 187, which sought to keep the undocumented immigrant out of public schools, hospital emergency rooms and seemingly any place its authors could imagine, led to citizenship applications and then voter registration by more than 2.5 million Hispanics over the next three years.

They caused a political revolution in California, which morphed from a swing state equally likely to elect Republicans or Democrats into one of the most staunchly Democratic states in the Union. Only one Republican has been elected to statewide office in the last 20 years, the almost non-partisan former Gov. Arnold Schwarzenegger, who won out in the 2003 recall of ex-Gov. Gray Davis.

Now Asian immigrants are feeling fearful because of President Trump’s ban on entry to this country by residents of several Muslim-majority countries and his attempts to restrict the number of political and humanitarian refugees allowed in, plus a drive to deport Vietnamese refugees with any kind of crime on their record, no matter how old or minor.

Asians also remember the Japanese internment during World War II, in which 120,000 Japanese-Americans were held in remote camps for several years.

“You hope things like that can’t happen again, but they really can,” said one green card holder from Thailand. “So I will become a citizen.”

Like her, thousands of Asians in California, from countries as diverse as China, the Philippines and India, see citizenship as the best protection from a potential future expulsion.

If they become citizens in anything like the proportions of Latinos who felt similarly in California after passage of Prop. 187, they could spur vast political changes well beyond this state’s borders. In fact, if both they and citizenship-eligible Latino immigrants ever register in large numbers, they could turn several once-solid Republican states into battlegrounds or cause them to lean Democratic.

And Asians here are applying, although there are impediments Latinos did not face in the late 1990s. Example: Of the 220,000 immigrants in Orange County now eligible for naturalization, nearly 30 percent are Asian. Of them, about 4,500 applied for naturalization through the first three quarters of 2017. If that trend continues statewide for the remainder of Trump’s current term, more than 150,000 Asians will be added to California’s voting rolls.

Because they’re registering largely for the same reasons as Latinos once did, they probably won’t change this state’s political composition. But what about other states? Taking Texas as an example, more than 680,000 Asians are now eligible for citizenship but have not applied. That could make for big change in a state that in November almost gave a Democrats their first statewide victory in more than 20 years.

Yes, the $725 naturalization application fee is a roadblock for many. So is the required blizzard of paperwork. But Texas saw more than 20,000 citizenship applications from Asians last year. If Latinos, many even more apprehensive about Trump’s policies than Asians, register in Texas in similar percentages – and they have not yet – they could combine with Asians to turn Texas Democratic. For that state contains more than 3 million Hispanics who have not sought naturalization despite being eligible.

For sure, the numbers indicate fear among both Latinos and Asians has not reached the same levels it did among California Hispanics after Prop. 187.

But what happens when and if Trump begins serious work on his long-advertised border wall? And what if he attempts mass deportations of illegal immigrants, as former Attorney General Jeff Sessions advocated during his days in the Senate?

For sure, hate crimes against immigrants of all kinds increased during Trump’s presidential campaign and his first year in office. If that trend accelerates, it may spur the kind of fears that pushed Latinos to get naturalized here.

Isaac Newton’s third law of motion tells us that for every action, there is an equal and opposite reaction. Just as former President Obama’s policies produced the backlash that elected Trump, so Trump’s policies may already have begun producing an even stronger national backlash against him and his party.

Despite constant Republican rhetoric about this state’s decline, things are actually going pretty well here – at least for the vast majority of Californians.

So there’s little doubt: The 50 percent who said in a recent poll that college is unneeded for material success are just plain wrong.

GOP in danger of becoming No. 3 choice in California

California Republicans have been predictably disconsolate since their election debacle of last fall, when Democrats swept them from every contested California seat in Congress and won complete control of state government for at least the next two years.

Commentary: Third party in California? Not going to happen

The next time you hear someone frothing over the prospect of a third party magically rising from the growing numbers of California's independent voters, take it with a large dose of skepticism.

Independent voters have not yet asserted themselves much at the polls, but the makings are there for a centrist third major political party that could seriously challenge the leftist-dominated Democrats and the right-oriented Republicans

Commentary: I listen to real victims of bias all the time. Jussie Smollett is infuriating.

Lying about an attack could easily weaken the believability of the terrible experiences that people with marginalized identities disclose in surveys and interviews with us.

Both Democrats and Republicans have long harbored big dreams about Latino voters. Now, as California gets set for its first seemingly influential presidential primary in decades, the dreams of both parties may not be coming true.

For decades, it was been one of the biggest nightmares of the California Republican Party: What happens when the sleeping giant of California politics finally wakes up?

Trump's “threat” to dump illegal immigrants in sanctuary cities turns out to be the tamest of paper tigers. Like much of the President’s bluster, it was not thought through, nor was it subjected to any analysis, merely getting tweeted on a Trumpian whim.

It was only a matter of time before the idea of allowing non-citizens to vote in some local elections spread from San Francisco to other locales just as sympathetic to immigrants, legal or not.

The Pledge of Allegiance is located at the front of the room where 106-year old Maria Valles Bonilla will recite the Oath of Allegiance for a naturalization ceremony at U.S. Citizenship and Immigration Services office Tuesday, Nov. 6, 2018, in Fairfax, Va. Bonilla is from El Salvador and it was her late husband's dream to become a U.S. citizen, so today she became a citizen for both of them. (AP Photo/Pablo Martinez Monsivais)