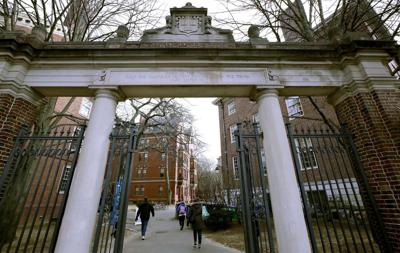 The U.S. Supreme Court recently heard arguments from Harvard and the University of North Carolina about using race and ethnicity in admissions policies. Project 21, the Black Leadership Network of which I am a member, submitted an amicus brief in the Harvard case.

Justice Samuel Alito asked some pointed and probing questions to the UNC defendants who tried to defend their practice of discrimination when admitting students. Essentially, they believe that because of alleged past discrimination against Black people, they are justified in discriminating against white and, particularly in the case of Harvard, Asian students by denying them admission -- and instead admitting Black students, despite white and Asian students scoring much higher on entrance exams.

Discrimination, in this instance, is lazy and unjustified. Instead of doing the harder work of analyzing each student individually, they treat potential students as a class and make their decisions depending on the class in which the student uncontrollably belongs.

This flies in the face of the inspired words in our Declaration of Independence, “that all men are created equal, that they are endowed by their Creator with certain unalienable rights, that among these are life, liberty, and the pursuit of happiness.” This sentence champions the rights of the individual, not the rights of a group or class. This is the foundation of our republic.

The American culture that built this great nation holds that any person can have the opportunity to pursue success because of freedom, equal treatment under the law, hard work and perseverance. It is antithetical to our sense of fairness and fundamental principles to deprive one person of the just fruits of their labor and give it to another.

Probing a bit deeper, one must ask why these universities of higher learning think they are justified in discriminating against deserving applicants.

Presumably, Black people previously experienced prejudiced behavior that prevented them from attending these universities. Can this be factually proven? For the sake of argument, let’s say, yes, it can be proven that minorities were intentionally denied entrance though they were qualified in the past. That sordid past cannot be changed. It happened, and it was a tragedy. The proper remedy for putting a salve on a previous wound is not to create another wound.

This is especially true because past and current applicants are not related. Can it be determined that John Smith was denied entry because he was a minority, and we have a distant relative of Smith now applying? Highly unlikely. Even so, Smith’s relative should still need to qualify based on their own merits, not because some admitting official wants to placate their conscience.

Yet that is not the situation before us. Instead, a qualified person is being denied admission who had absolutely no knowledge or participation in the prejudiced action against Smith. For the sake of justice, the behavior of these universities has no legitimacy.

Here is the irony in this entire situation. The Asian students being denied admission are part of a group that also faced severe discrimination in the past. Japanese Americans were forced into camps on American soil during World War II because of an unfounded fear that they would be loyal to Japan, our enemy at the time. Chinese Americans were used as forced labor to build the great railroad system across the northern states. Now, Asian Americans are scoring very well on standard entrance exams and performing admirably in high school, yet they are, as a group, being denied admission in favor of Black people, though the Asian Americans had no participation in the past prejudice that Black people experienced.

Hopefully justice will prevail and this blatant discrimination by these universities will be declared unlawful by the Supreme Court. The result should be that the admission officials will stop being lazy and look at each person individually to determine if they qualify for admission. And the minorities that do qualify can be confident that they earned their admission based on their merits and not to assuage the guilt of some lazy admission official.

Hill is a member of the National Center for Public Policy Research’s Project 21: nationalcenter.org. He previously was a lawmaker in the Florida House of Representatives. He wrote this for InsideSources.com.

The Supreme Court recently heard arguments from Harvard and the University of North Carolina about using race and ethnicity in admissions policies. At stake is the fate of affirmative action and the positive effects race-conscious policies have had on higher education and the workplace for more than 50 years.