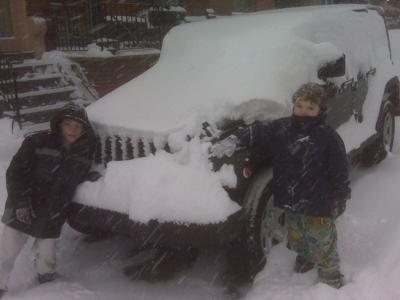 It’s been raw and cold around here lately, and that’s just fine with me.

My wife and I both grew up in Virginia, which sits smack in the middle of what’s known as the Mid-Atlantic region. It’s not just the geographic dividing line between North and South, but also an atmospheric boundary between cold northern climes and balmy southern ones.

Its weather is famously unstable and difficult to predict. It can be freezing on Halloween, 75 and sunny on Christmas, and a blinding blizzard on George Washington’s birthday. It can drop 6 inches of snow one day, which all melts the next day under unseasonably warm sun.

It doesn’t get as extreme as either end of the weather spectrum – it will never be as cold as Boston in the winter nor as hot and humid as Charleston in the summer, but we got a little taste of both.

From the editor: On letting go of honking

I learned to drive in Washington, D.C. which cannot be rivaled in its brutal driving style. It beats even New York in the pure, raw, ego-driven spite of behavior behind the wheel.

After half a lifetime of this, my wife and I moved to Los Angeles, which is roughly similar to our weather here, at least the Upvalley weather – hot in the summer, with occasional rain through the warm-ish winters. We were amused to see how the Beautiful People of LA would crack out the fashionable warm boots and scarves the moment the temperature veered anywhere near 50 degrees.

I did miss the East Coast’s brilliant autumns, but I quickly got adjusted to the absence of my least favorite weather phenomenon – snow. Never once in our three years there did I have to shovel out my car. Which was refreshing.

But my wife got an attractive transfer opportunity with her company that took us to Philadelphia. It was just a few hours north of where we grew up so we expected the weather would be similar.

Turns out a few hours was plenty to push Philly much more into the “Boston in winter” end of things than we had ever expected. Not only is it farther north than D.C., it is also built on a flat plain between two rivers, meaning winter features a constant, icy-cold blast of wind off the water.

From the Editor: Living life in a small town

Living in a big city has many attractions, ut it’s also an experience of being surrounded by strangers all day

I used to walk my kids to school in the morning, and when I got home, my face was raw and shriveled up, like one of those old-timey craft witch dolls where the face is a dried-up apple. To this day, I have never looked so old in the mirror as on those Philadelphia winter mornings.

As a special bonus, there was lots of snow too. At least three or four times per winter, often more, 8 or 10 inches of snow would fall. Several winters while we were there featured multiple 12-inch-plus snowfalls.

Snow is great on a big yard, or on a rustic rural farm field, but it is not so easy in one of the dense, old cities of the northeast. There very few driveways, so most people have to park on the street. Snow plows would come through and create huge icy ridges, trapping in cars and making pedestrian crossings more of a hazardous alpine climb than a walk down the street.

Digging out your car meant hacking through the frozen mess, and trying to figure out where to dump the result. Throw it back in the street? Block the sidewalk? Dump it next to your neighbor’s car and hope he doesn’t need to get out? There were no good answers.

There were fights and neighborhood feuds, including occasional physical violence, over cleared parking spaces. There is a camp in the city that believes that if you clear a space, you own it. There are others who point out that saving spaces on public streets is illegal.

From the Editor: Our uneasy companion

Fire is a useful tool but it is also a historic menace. Residents of ancient villages and cities lived in fear of fire, started by candles, lamps, cooking fires and natural sources.

And after a few hours, the piles of plowed snow would become studded with dog waste, which would then freeze in place, lasting for days or weeks in the sub-freezing weather.

My kids took to talking them “poopsicles.”

My wife got her job here in Napa Valley in late 2010. The kids and I stayed back a couple of months while we organized the move. We came out to visit in in early February of 2011. There was well more than a foot of filthy snow on the ground in Philadelphia when we left and daytime temperatures were reluctant to break 30, with lows in the teens at night.

It was, of course, winter here in Napa County as well. And as it happened, it snowed here too while we were visiting.

As we sat at the pool at my wife’s hotel, enjoying the warm early February sun on our skin, we could see a tiny little dusting of white along the top of the Palisades above Calistoga.

From the editor: Where everybody knows your name

The thing I like about local journalism is that readers know who you are.

This, I realized, was the way I wanted to experience snow. At a safe and warm distance.

It’s been almost nine years since I’ve had to lift a snow shovel for any purpose. I have an ice scraper around somewhere, but I think I have used it maybe once since the kids and I showed up permanently in April of 2011.

So our rainy, gloomy weather of the last week or so brings me nothing but joy, since this is just about as bad as it’s likely to get until the warm returns in the spring.

We've done a lot of good work over the past year, so picking the most memorable can be tough, but here are the ones that stand out in my mind for various reasons.

They Served With Honor

We highlighted the stories of 10 Napa County residents who served their country in the military, with stories of courage and perseverance.

For the one-year anniversary of the Pathway Home shooting in Yountville, we examined what it meant to the community and survivors.

The Costs of Living

Reporter Courtney Teague took a deep dive into our housing crunch, looking at its effects on physical and mental health of area residents.

Reporter Jennifer Huffman explored how and why a black bear managed to wander unseen into downtown Napa.

From the editor: The thrill of the game

In my home growing up, we had one Sunday observance that was not to be missed under any circumstances. And it had little to do with church.