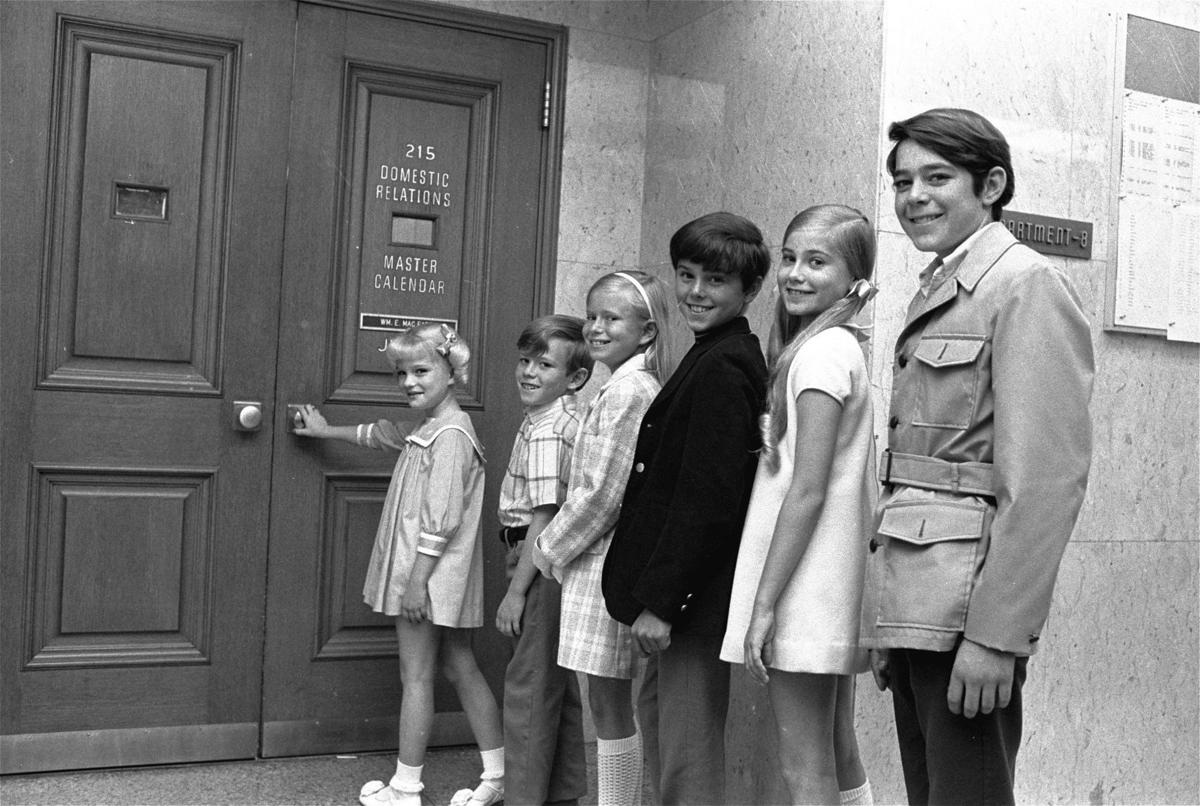 Six youngsters who only recently met line up outside a Los Angeles, Ca. courtroom June 18, 1969 to await approval of contracts calling for them to play brothers and sisters on a new television series. The series, called "The Brady Bunch," is about a widower with three boys who marries a widow with three girls and will premiere on ABC-TV in September. Left to right: Susan Olsen, 8; Michael Lookinland, 8 1/2; Eve Plumb, 11; Christopher Knight, 11; Maureen McCormick, 12; Barry Williams, 14. (AP Photo) 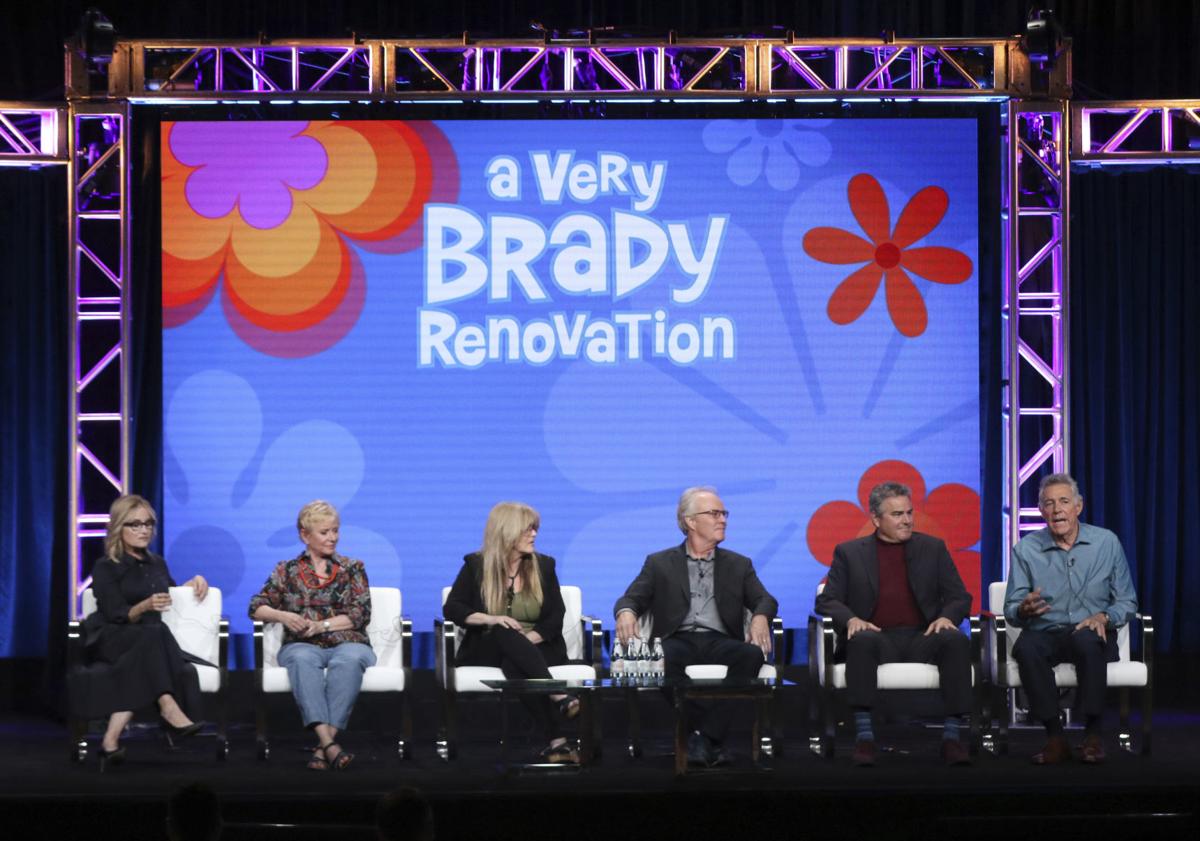 In 1966, Sherwood Schwartz was the successful creator of the CBS sitcom “Gilligan’s Island.” He read in the Los Angeles Times a four-line filler that about two-thirds marriages have children from a previous union in the home.

This was how “The Brady Bunch” came into the mind of Schwartz.

He took the premise of the TV sitcom to the three networks — ABC, CBS, and NBC. None of the three television networks were interested in the new family sitcom until the Henry Fonda and Lucille Ball 1968 film “Yours, Mine, and Ours” hit the theater box office. Then, somebody at the ABC network remembered Schwartz’s pilot script.

From the 1962-65 legal drama “The Defenders,” Robert Reed was cast as architect Mike Brady.

He felt the TV sitcom dad role was beneath his acting skills as a trained Shakespearian actor, but took the role due to financial difficulties. Schwartz wanted Gene Hackman for the role, but the ABC network executives insisted on Reed instead.

When Florence Henderson was cast as Carol Brady, she was away filming “Song of Norway,” a box office flop, in Denmark. For the first six episodes, the TV sitcom, the mom role was worked around until she returned to the United States and the part could be filled in.

During the first season, Florence Henderson wore a wig because she had her hair cut for the stage revival of “South Pacific.’ Shirley Jones turned down the role of Carol Brady.

However, Lookinland was a natural strawberry-blond. His hair was dyed dark to match the other two older boys for the Brady role.

When a woman remarries, she takes on her husband’s new name. However, her daughters don’t take on their stepfather’s name; unless he legally adopts them. Oops, Sherwood Schwartz! Got ya!

As the lovable housekeeper Alice Nelson, two-time Emmy Award-winning television actress Ann B. Davis (“The Bob Cummings Show” and “The John Forsythe Show”) was cast for the role. She was known for her comedic timing. Allan Melvin played her boyfriend Sam throughout the run of the show.

On Friday, Sept. 26, 1969, “The Brady Bunch” aired at 8 p.m. This new family TV sitcom wasn’t a huge success in the ratings. Viewers took to it slowly. In the pilot episode, the Martin girls owned a cat named Fluffy, who was never seen again any further episodes. What became of the cat? Maybe the same could be said about the Brady’s family dog Tiger.

Viewers saw that pet only in the first season. In Brady trivia, I learned that the dog accidentally got killed by a car. Another dog replaced him the episode “Tiger, Tiger,” but wasn’t as good as the original. Shortly afterward, Tiger was written out from future episodes in the third season. He just faded away without any explanation whatsoever.

There was constant turmoil on the set throughout the TV series’ five-season run. Robert Reed often complained about the campy scripts written for the program. He wanted more realism in story line plots.

However, Sherwood Schwartz ignored Reed’s constant complaints. By the fifth season, a new character, Cousin Oliver, was written in. Robbie Rist joined the cast as Cousin Oliver in Episode 112, “Welcome Aboard,” and remained for the final season.

When the last Episode 116 script, “The Hair-Brained Scheme,” was given to Robert Reed, he refused to be in it. He objected to the silliness of Greg’s hair turning orange just before his high school graduation.

Nevertheless, Reed was on the set when the final episode was shot. At one point, Sherwood Schwartz was asked by the production staff if he wanted Reed removed from the set. His reply was to them. “You can’t remove him. He’s the kids’ father for crying out loud!”

After “The Brady Bunch” went on hiatus for the summer, Schwartz was planning to write Robert Reed’s character Mike Brady out of the program. Then, he received the call from ABC informing him that the family sitcom wouldn’t return for the fall season.

Back in 1978, Glen A. Larson had a deal with Universal Studio to make a pilot episode of “Buck Roger in the 25th Century” for the NBC network.

Fifty years of “The Courtship of Eddie's Father”

This 1969-1972 family sitcom was based on the 1963 MGM film directed by Vincente Minnelli. Both the film and ABC television series were adapted from the best-selling novel “The Courtship of Eddie's Father” by Mark Toby.

Remembering “The Many Loves of Dobie Gillis”

Your Turn: Napa TV buff Carl White remembers the groundbreaking show that put teenagers at the center of a major TV production.

Your Turn: Famous movie was based on a gruesome real case.

The Diary of Anne Frank

Your Turn: Film and TV buff Carl White remembers the movie "The Diary of Anne Frank."

Inside a Brady girl's world

Six youngsters who only recently met line up outside a Los Angeles, Ca. courtroom June 18, 1969 to await approval of contracts calling for them to play brothers and sisters on a new television series. The series, called "The Brady Bunch," is about a widower with three boys who marries a widow with three girls and will premiere on ABC-TV in September. Left to right: Susan Olsen, 8; Michael Lookinland, 8 1/2; Eve Plumb, 11; Christopher Knight, 11; Maureen McCormick, 12; Barry Williams, 14. (AP Photo)