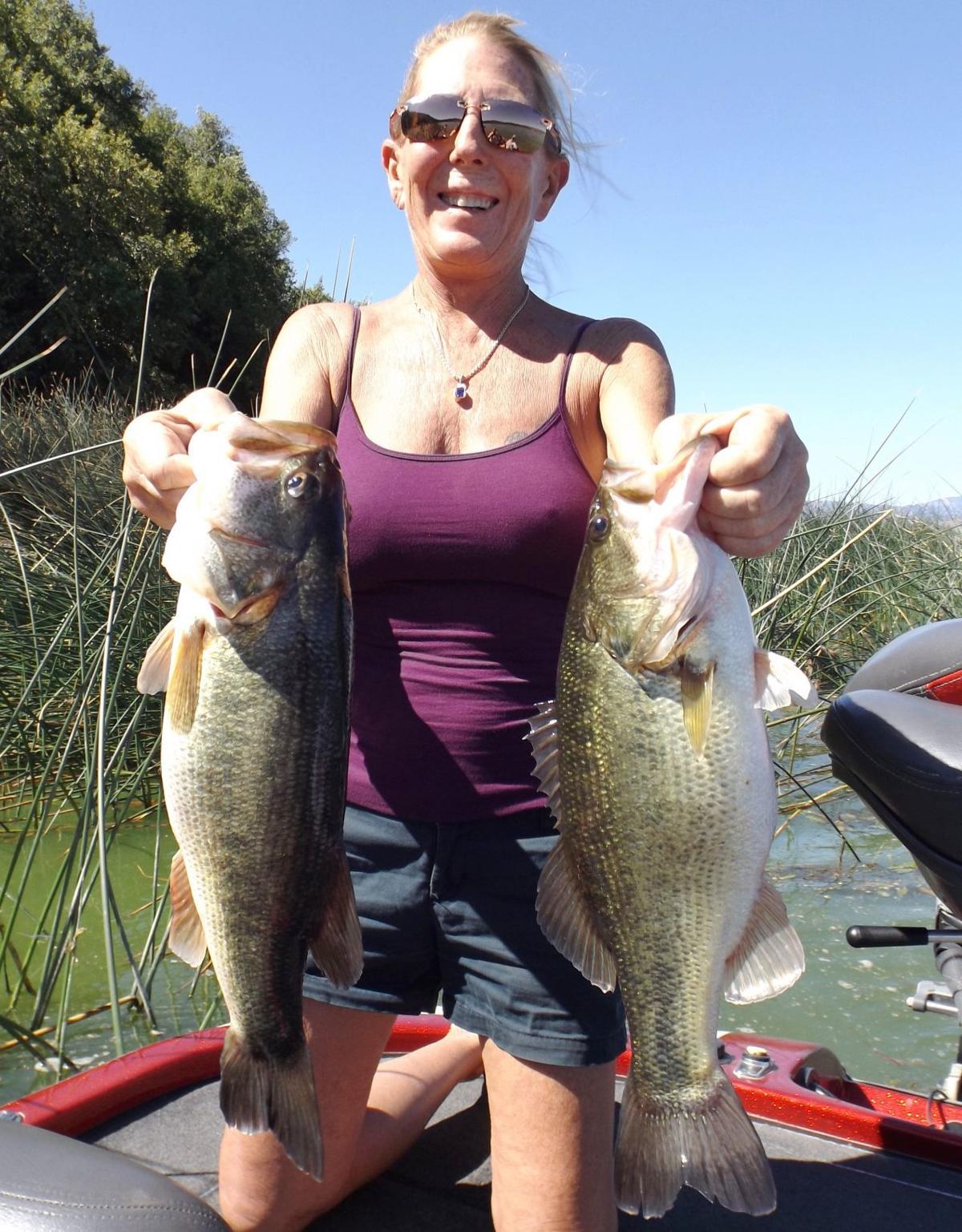 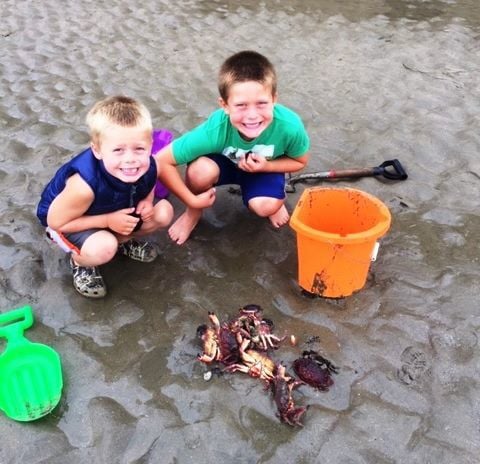 Brothers Krue and Kellen dug up some crabs for supper. 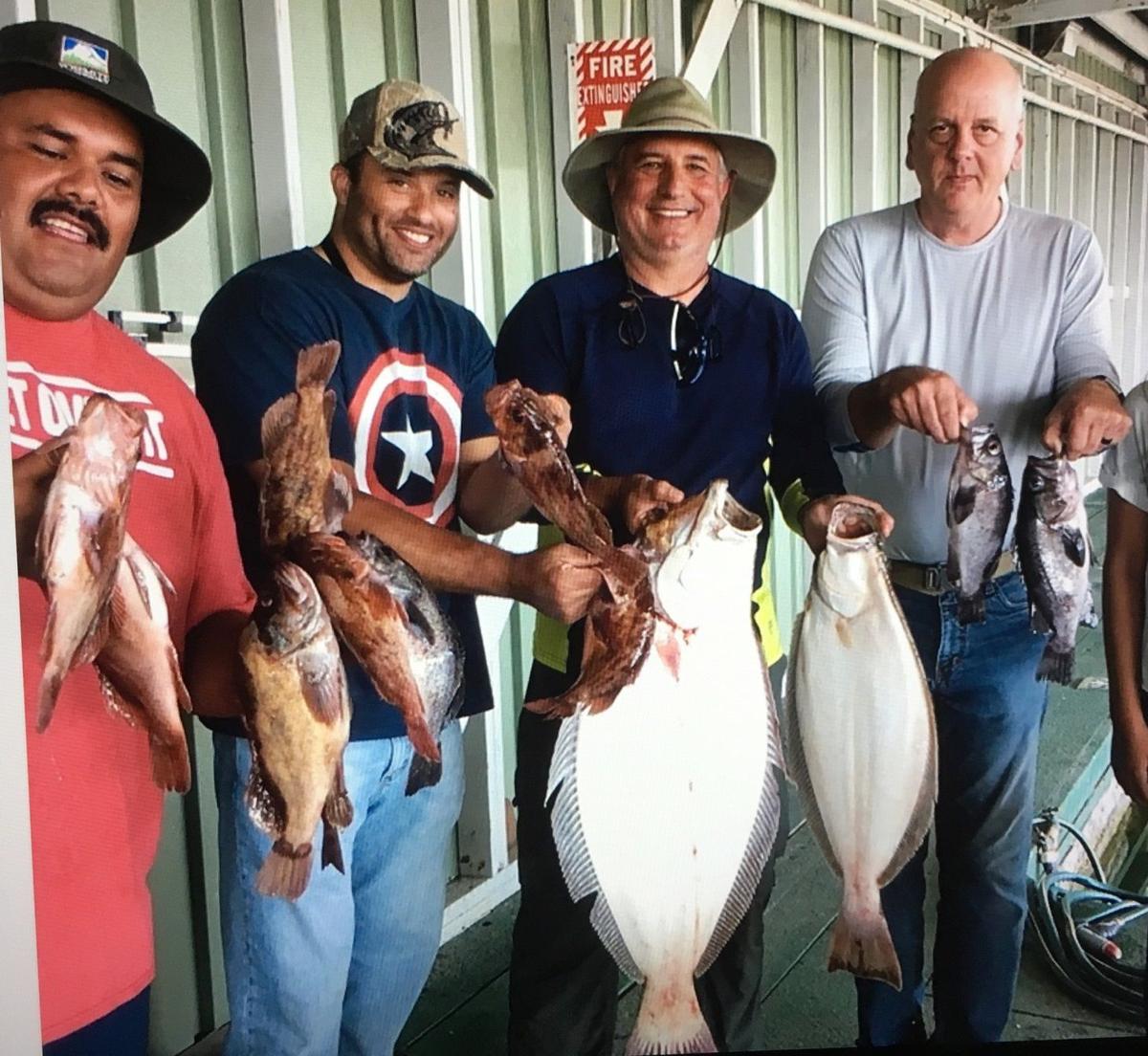 Back from their salmon, halibut and rock cod combo trip on the Osprey are, from left, Robert Serrano, David Delahoussaye, Paul Damiao and Napa's Scott Gullett.

Brothers Krue and Kellen dug up some crabs for supper.

Back from their salmon, halibut and rock cod combo trip on the Osprey are, from left, Robert Serrano, David Delahoussaye, Paul Damiao and Napa's Scott Gullett.

It Was Déjà Vu All Over Again… L.T. called me about a month ago to say “Let’s go fishing.” We booked Clear Lake pro guide Bob Myskey for Sept. 25, and I started to get my hopes up.

You see, Lora Trinchero and I have fished together for over 15 years – and she has beaten me every single time. She gets the first fish, the most fish, the biggest fish – well you get the idea. But hope springs eternal, so I approached last week’s Clear Lake trip with some good optimism – it was going to be my turn!

Before I got my gum unwrapped, she had a nice keeper on the line – not three minutes after we made our first stop in a promising location on the Rattlesnake arm. Then, in mid-trip, she boated and released the biggest of the day. My hope was rewarded, slightly, when it seemed that I might have tied her in the number caught.

We caught and released 32 largemouth bass. Quite a few small ones, but plenty were keeper size. I have fished Clear Lake with various fishing partners 11 times since April, with some dandy catches. It is interesting that this biggest single-day catch of 32 fish came as the season starts to wind down, and Lora was in the boat. Wait till next year!

Meanwhile, Ed Smith And I… were on the Feather River with pro river guide Kevin Brock Tuesday and Wednesday – too late for this deadline. Check us out next Friday for that story. It was the 27th straight year that I have fished with Kevin. That includes salmon on the Sac and Feather, steelhead on the Smith, and stripers on the Delta. Kevin has fished three generations of Ryans. He put me on my biggest king salmon at 45 pounds on the Feather some years ago.

Neighbor Nephew‘s Kids… out fishing again. Here are Krue and Kellan. This time with a bunch of crabs for supper. Check out the shovel and pail. They recall fond memories when we went crabbing on Salt Pond in my hometown back in Rhode Island. There was plenty of water around. R.I. is called the “Ocean State.”

The Bounty Of The Sea… was tapped by Scott Gullett of Napa fishing with his friends, Robert Serrano from Sacramento, David Delahoussaye and Paul Damiao of Vacaville. They scored a nice variety of fresh fish on a salmon, halibut and rock cod combo trip on the fishing boat, The Osprey. You can book this perfect six-pack at 415-559-1042.

The 2019 Fishing Action… in the salt is starting to slow down. It’s been a marvelous year across all the major sport fish species, with plenty of action continuing – and Dungeness crab recreational season predicted to be on tap starting Nov. 2. Crab-only and combo trips are already being booked.

I know you insist on the traditional family and neighborhood crab feeds leading up Thanksgiving, so now is the time to book a couple of trips. Most of you have your own favorite fishing boats; don’t wait to call them. I follow a couple of boats – The New Sea Angler at Bodega Bay (875-3344) and the Argo six-pack at San Francisco’s Fisherman’s Wharf (415-361-7757).

Those measures include season delay, area closure and crab pot reductions during spring months as species of concern begin migrating into California waters. Probably caused some grumbling, but responsible operators and anglers I know will want to take part in this long-term effort to benefit our fishery.

“My Birdbath Had Whitecaps”… was the way Keith Fraser at San Rafael’s Loch Lomond Bait and Tackle (415-456-0321) described the wind in San Pablo Bay last week. He also said “I can’t believe that halibut are still an option this late in the season, and I have never seen anything like this before…” He’s got live ghost shrimp, live grass shrimp, live smelt and pile worms in the shop, and said “the smelt is an outstanding bait for halibut or ling cod.”

Monterey Is Not Usually… on our watch list of action you can tap into. But it is so completely involved in California’s maritime history. Take your kids for a visit to the fabulous Monterey Bay Aquarium; it has been there since 1984 and gets better every time we go. It’s right across the street from the location of Doc Rickett’s Pacific Biological Laboratories, where “Cannery Row” author John Steinbeck used to hang out. Stay on Cannery Row and eat at The Sardine Factory on Wave Street for a look back in time.

Bring your gear and go fishing there right now. Listen to these exotic rockfish mentioned in the Friday Hot Sheet: canaries, browns, coppers and vermilions. Add in halibut and ling cod for an extra dividend. I’m told the Kahuna berthed at Moss Landing is first class all the way. Call them at 831-633-2564.