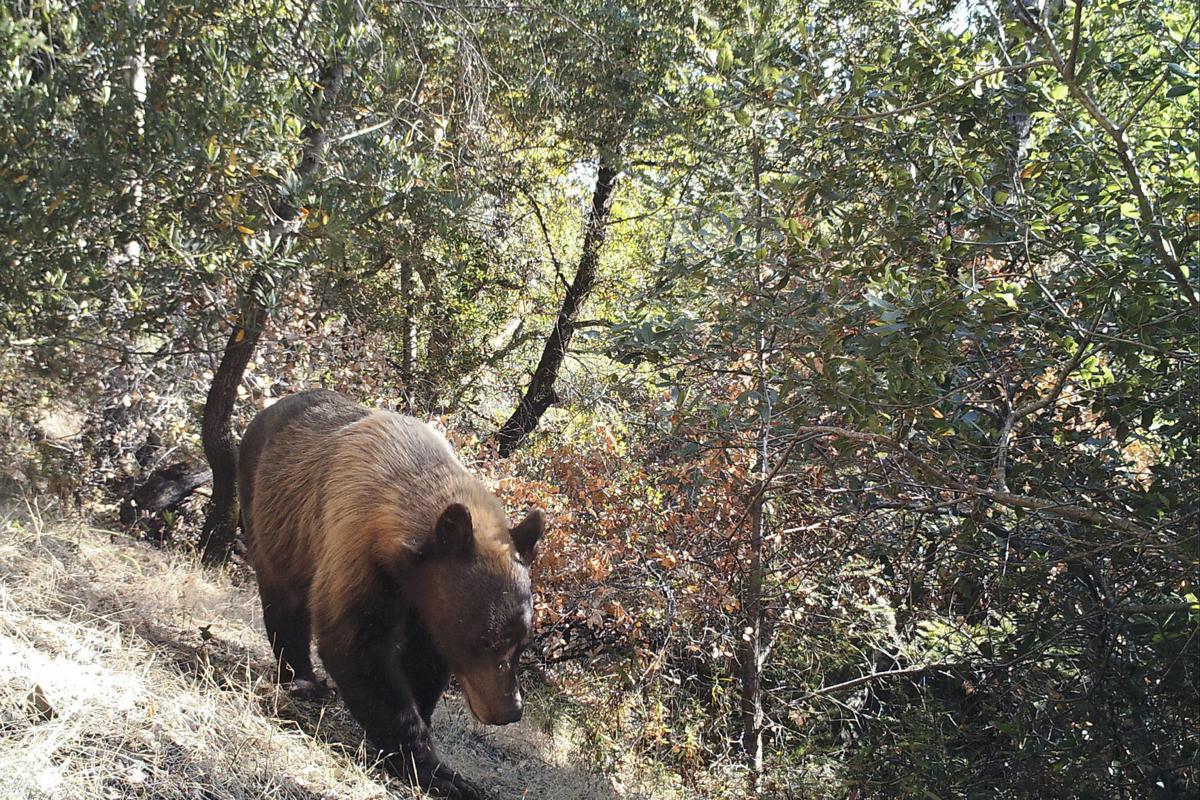 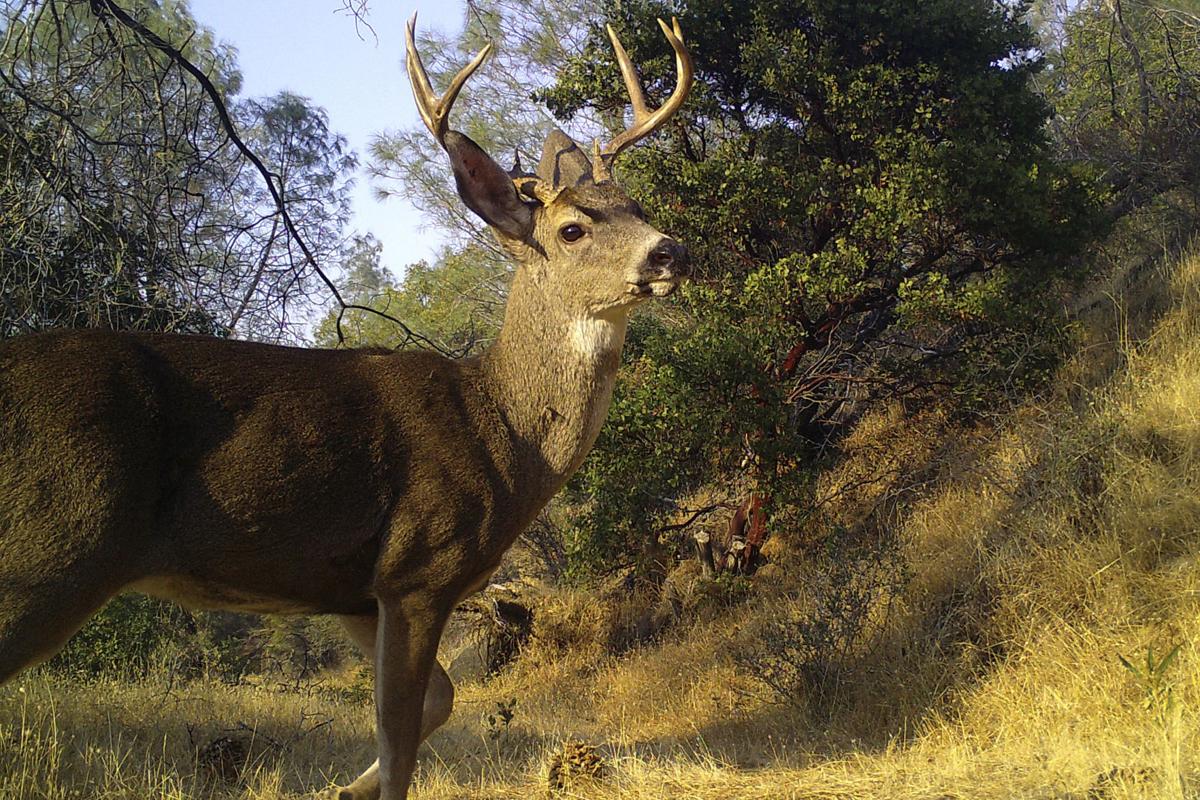 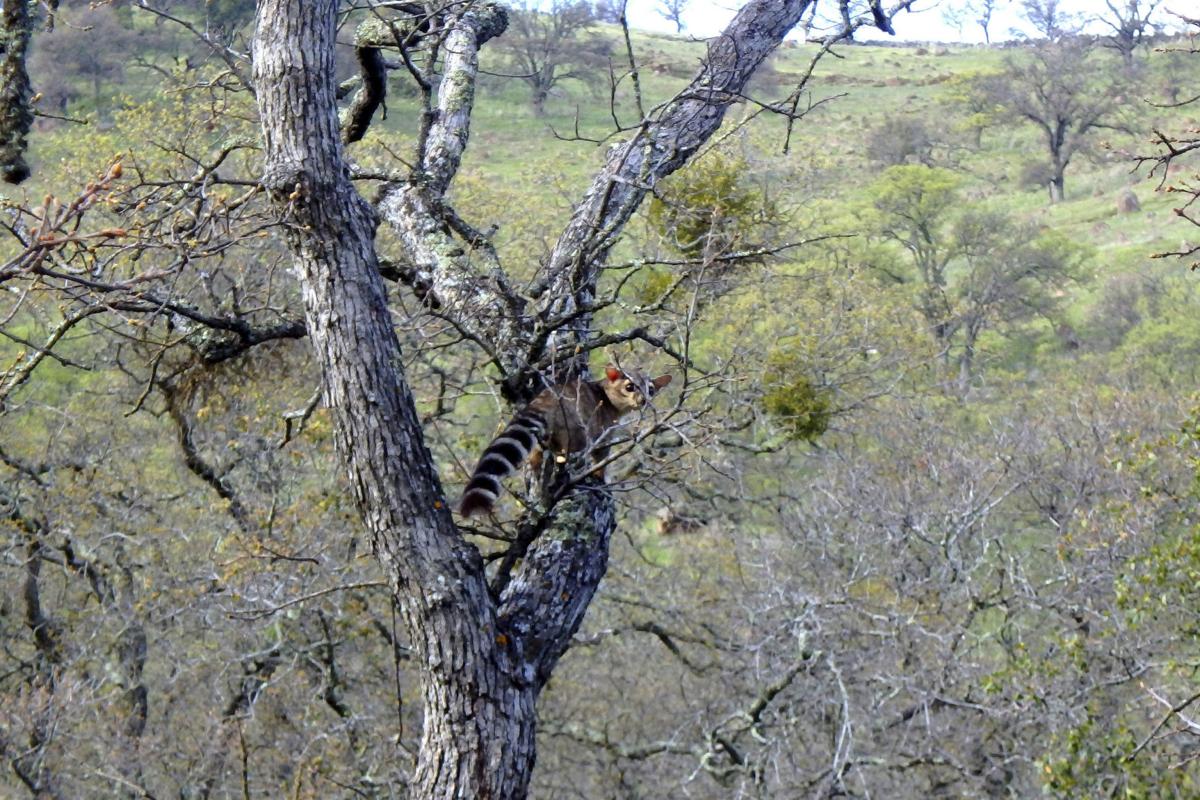 This ringtail photo taken during a ringtail biology workshop in the Sutter Buttes. 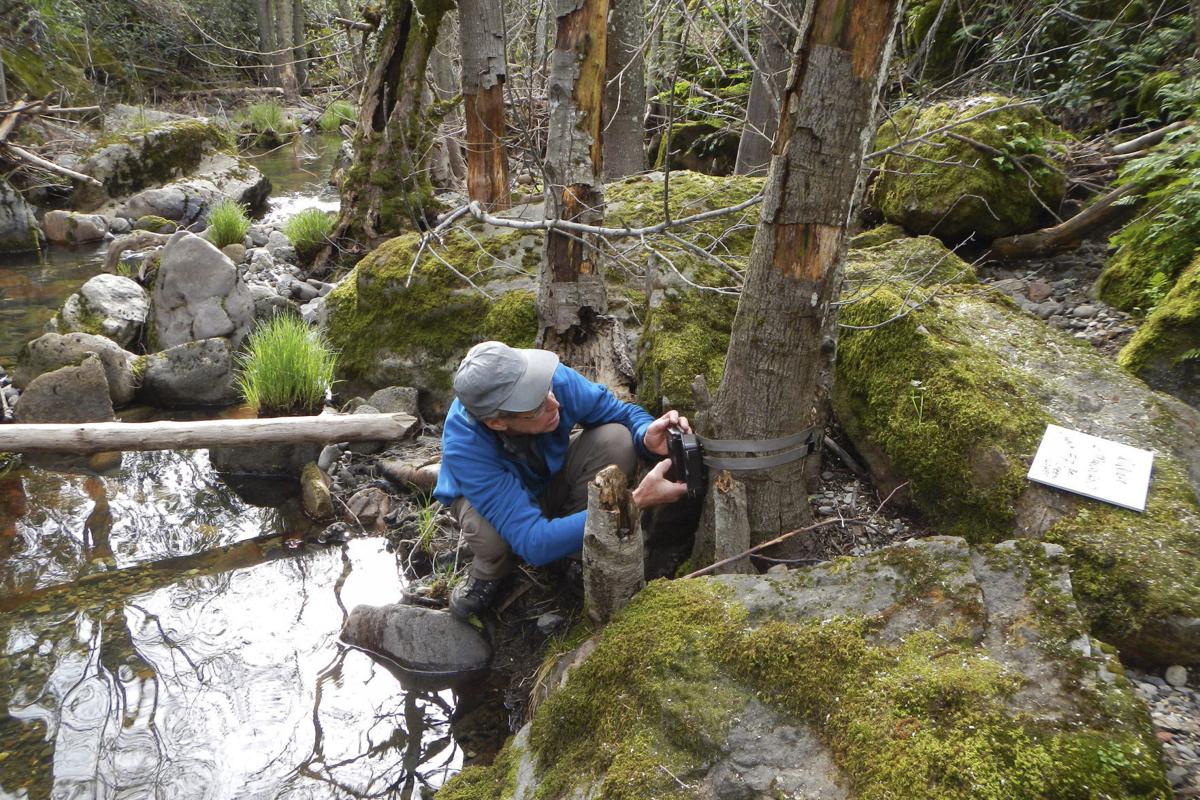 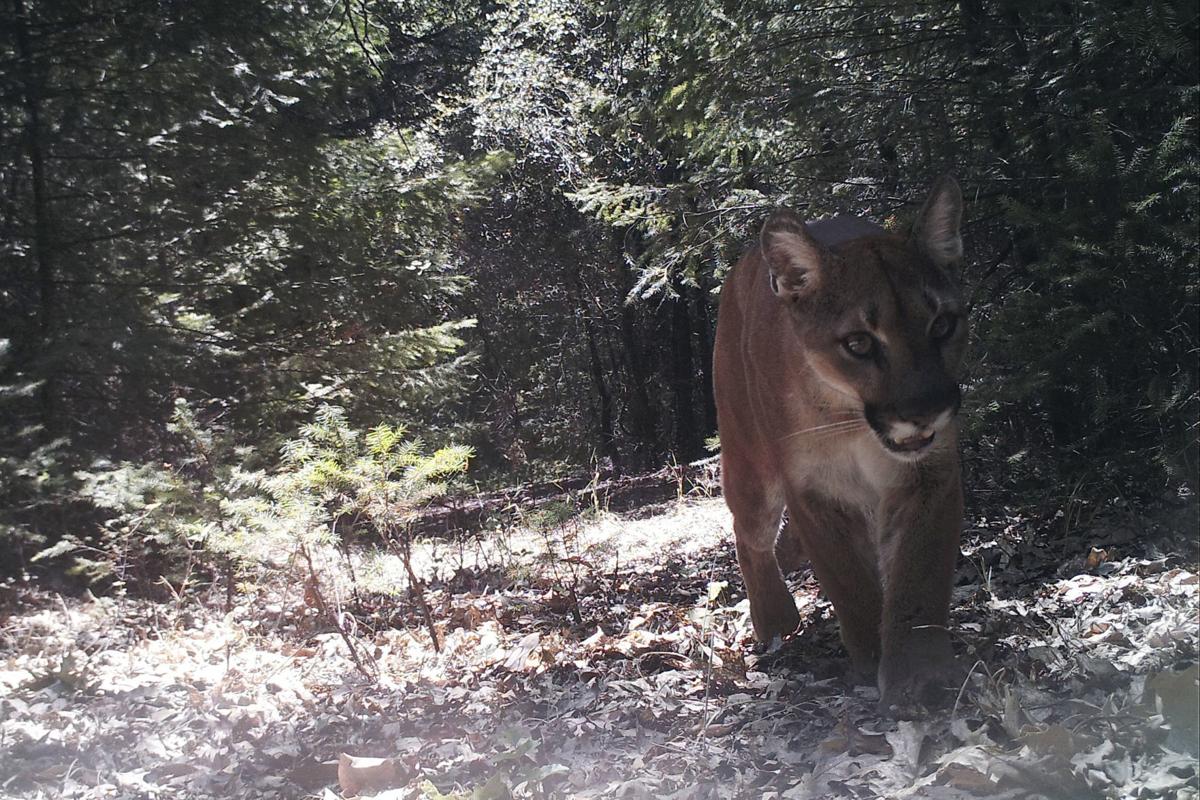 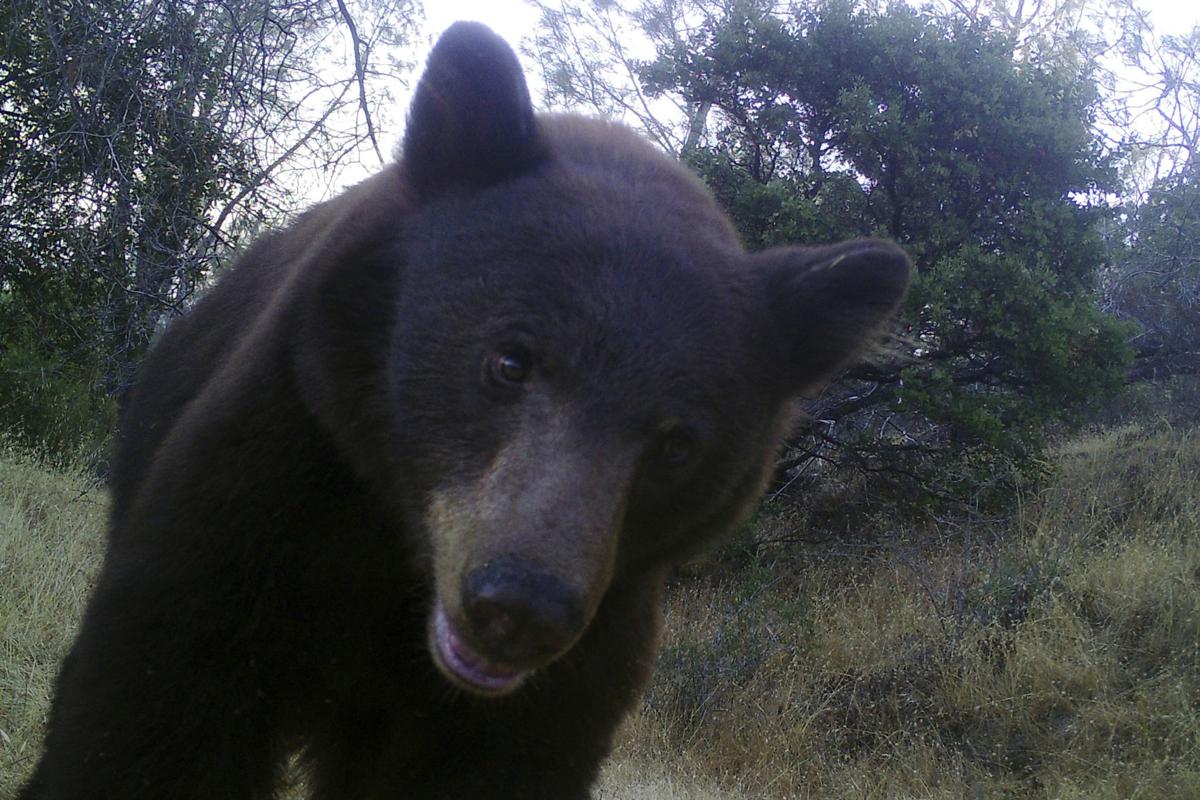 The remote camera location that Land Trust volunteers Paula Peterson and Penny Proteau visit every few months may not be getting as many photos and data points as others in the non-profit’s Wildlife Picture Index project, but the story of this camera suggests at least one conclusion; an abundance of curious bears.

“The first time we went there, we were reminded just how curious bears are. It looked like a bear pulled the camera from the stake, put a tooth through the lens and tossed it down the trail,” said Proteau.

“Fixing the camera to a stake didn’t work. Putting it in a steel box didn’t work,” said Peterson. “It wasn’t until we strapped the steel box to a tree with steel cable that the bears finally met their match.”

Over the last two years, the Land Trust has been using an array of motion-activated cameras deployed across nearly 5,000 acres to gain a better understanding of wildlife on Land Trust properties and Napa County wildlands. With two years of data catalogued and analyzed, the Wildlife Picture Index Project has yielded some exciting results.

“In addition to showing healthy levels of overall mammal diversity, our first two years of data indicates that we have a particularly high abundance of black bear,” said Land Trust Stewardship program manager Mike Palladini. “Based on comparisons with results from other wildlife monitoring projects, it appears that we have among the highest black bear abundance in the San Francisco Bay region.”

The results also included another bit of surprising news; a confirmed photo of a ringtail.

The ringtail is a member of the raccoon family and is listed as a fully protected species in California. Little is known about the animal’s distribution or abundance in the San Francisco Bay region due to its reclusive, nocturnal behavior.

The Land Trust’s remote cameras only captured one photo of the animal; a picture taken at night that made identification difficult. However, a number of wildlife biologists, including ringtail researcher David Wyatt, have confirmed the animal’s identity, making it the first wildlife camera documentation of ringtail in the nine county Bay Area.

“One photo doesn’t give us a population estimate, but it does give us rare confirmation of the ringtail’s presence,” said Palladini.

A dedicated group of Land Trust volunteers help maintain the cameras, including those that bears have pawed, bitten and even knocked over, and catalog the images. The Land Trust then analyzes the data from those images using a standardized scientific protocol referred to as the Wildlife Picture Index (WPI).

Now in its third year, the Land Trust’s WPI project has begun to paint a detailed picture of mammal richness and abundance. The project is also yielding data that can be used in conjunction with other WPI projects in the North Bay to monitor wildlife species at a regional scale.

“The health of an ecosystem and its connectivity builds resilience,” said Sue Townsend, a consulting wildlife ecologist on the project. “Using the Wildlife Picture Index over time can give us an idea of the health of that ecosystem by showing who is out there and where.”

“We hope to build on the current project to gain a better understanding of how species like the black bear – which has a large home range – are utilizing habitat linkages to move between existing protected natural areas,” said Palladini. “We know we have high bear abundance, but we’d really like to know how bears move across the landscape, particularly how they are using remaining wildland corridors.”

“We now have a much better picture of where these critical linkages are thanks to innovative efforts like the collaborative Mayacamas to Berryessa Landscape Connectivity Project, which is mapping priority corridors,” said Palladini. “Moving forward, we also hope to work with our partners on public outreach, education and citizen science to increase awareness and appreciation of bears in our area, and to help prevent human-bear conflict.”

Large mammals like the black bear need large natural areas with connections between them, something that still exists in parts of Napa County. For this reason, one of the Land Trust’s goals is to ensure that these connected wildlife corridors are protected forever.

“There are already some key areas where we are ensuring the ongoing protection of wildlife corridors,” said Doug Parker, CEO of the Land Trust. “For example, our biggest easement ever, completed in 2017, protected over 7,000 acres that connected with 15,000 other protected acres. We see a great potential, in just the next few years, to create a continuous corridor of protected land running the entire length of the ridges on either side of the valley.”

The Land Trust will continue to gather data from these remote cameras, comparing future results with existing information, all while further informing land protection and stewardship strategies. Overall, the project will help the Land Trust improve its ability to prioritize land conservation and management activities in Napa County, making sure those efforts protect native wildlife.

Not to mention the added benefit of continually producing striking images that open a window on the often hidden lives of curious bears and other wild animals.

To see a full gallery of wildlife photos from the project, along with updates as it progresses, visit the Land Trust website at https://www.napalandtrust.org/land-stewardship/wildlife-picture-index-project/.

Jorgen Gulliksen is the communications associate at Land Trust of Napa County, a nonprofit dedicated to preserving the character of Napa by permanently protecting land. In its 43-year history, the Land Trust has protected more than 74,000 acres of land, an area equivalent in size to the Point Reyes National Seashore.

Land Trust of Napa County has bought 1,031-acres of undeveloped land above Chiles Valley that will become the non-profit’s newest preserve.

Land Trust of Napa County has bought 1,031-acres of undeveloped land above Chiles Valley that will become the non-profit’s newest preserve.

Fire, an old road and a rare plant produce an epic journey of renewal

A rare dependent species, Hollyleaf Ceanothus seeds need fire to germinate, and the Atlas Fire on Mt. George in Napa in 2017 did just that.

This ringtail photo taken during a ringtail biology workshop in the Sutter Buttes.