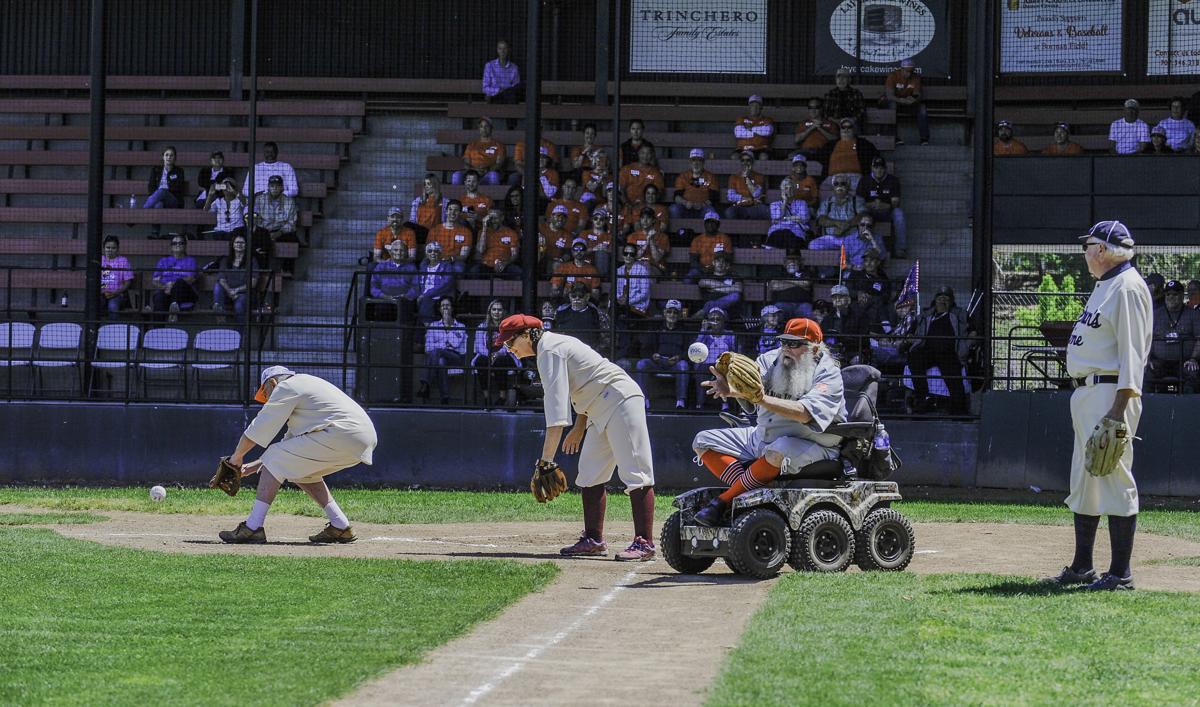 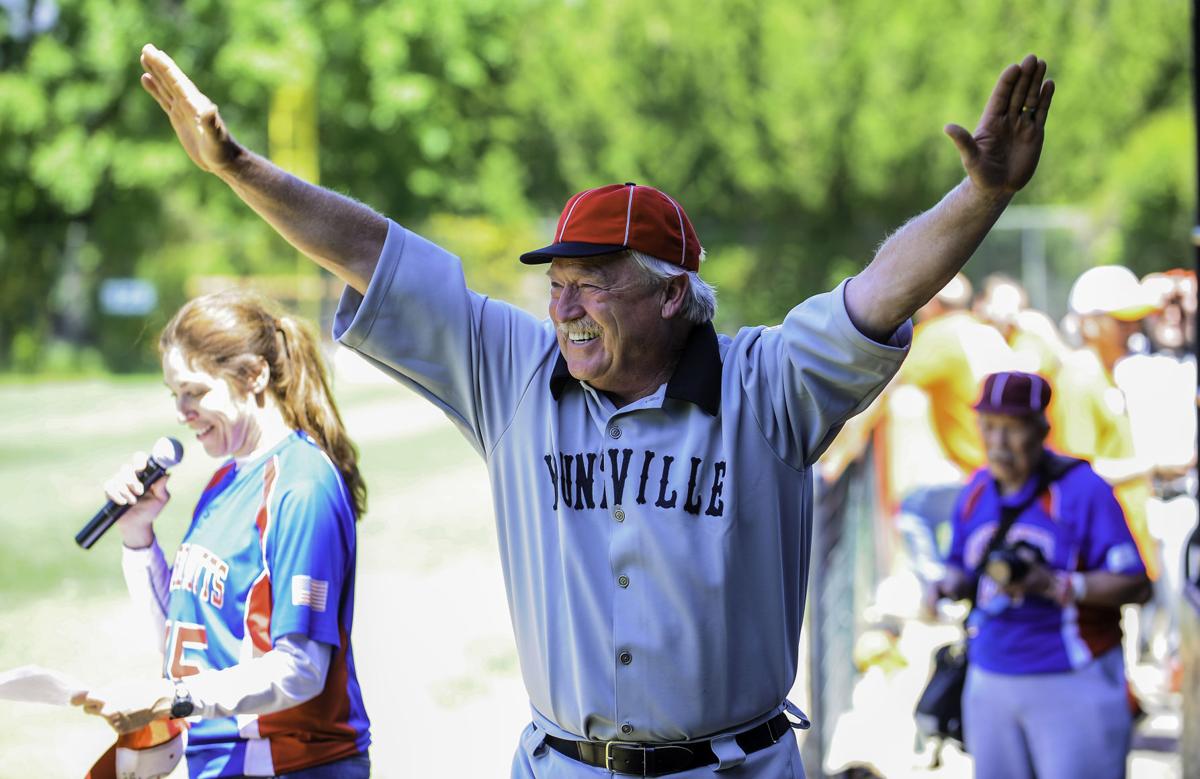 Jennifer Brusstar, the CEO and President of the Tug McGraw Foundation, introduces the manager of the Yountville softball team, Wayne Brasher, on Thursday at Cleve Borman Field in Yountville. 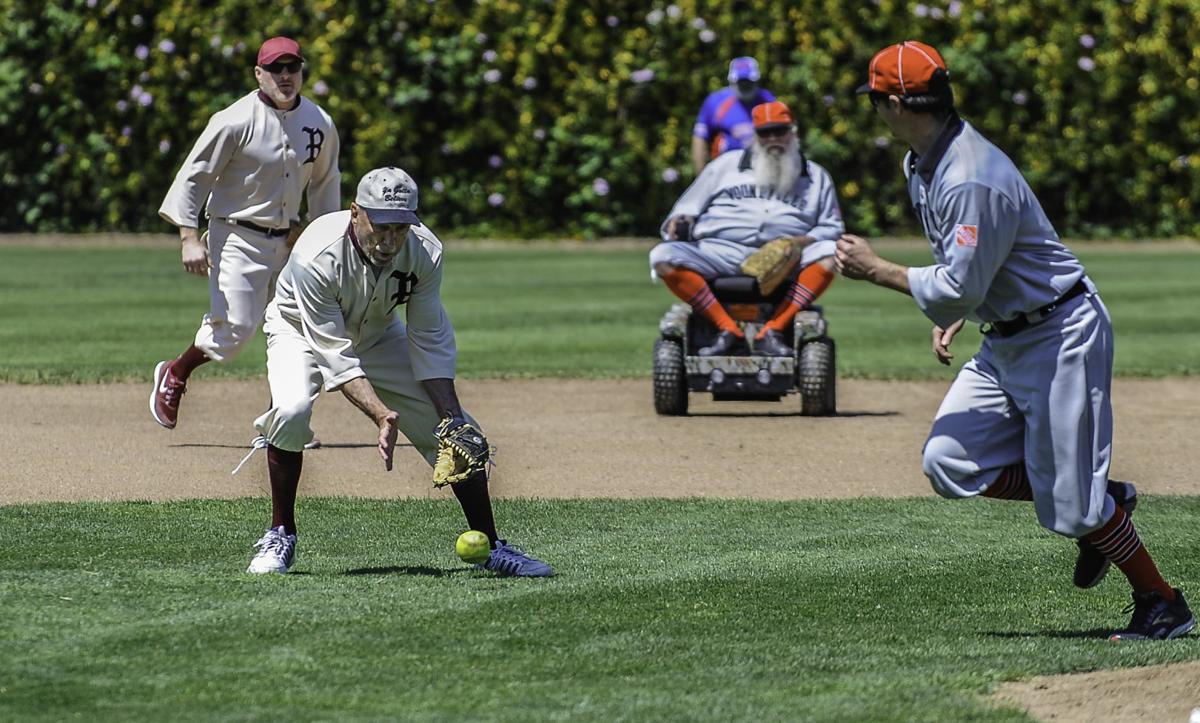 The Mixed Nutts are shown during Thursday's softball game at Cleve Borman Field in Yountville. 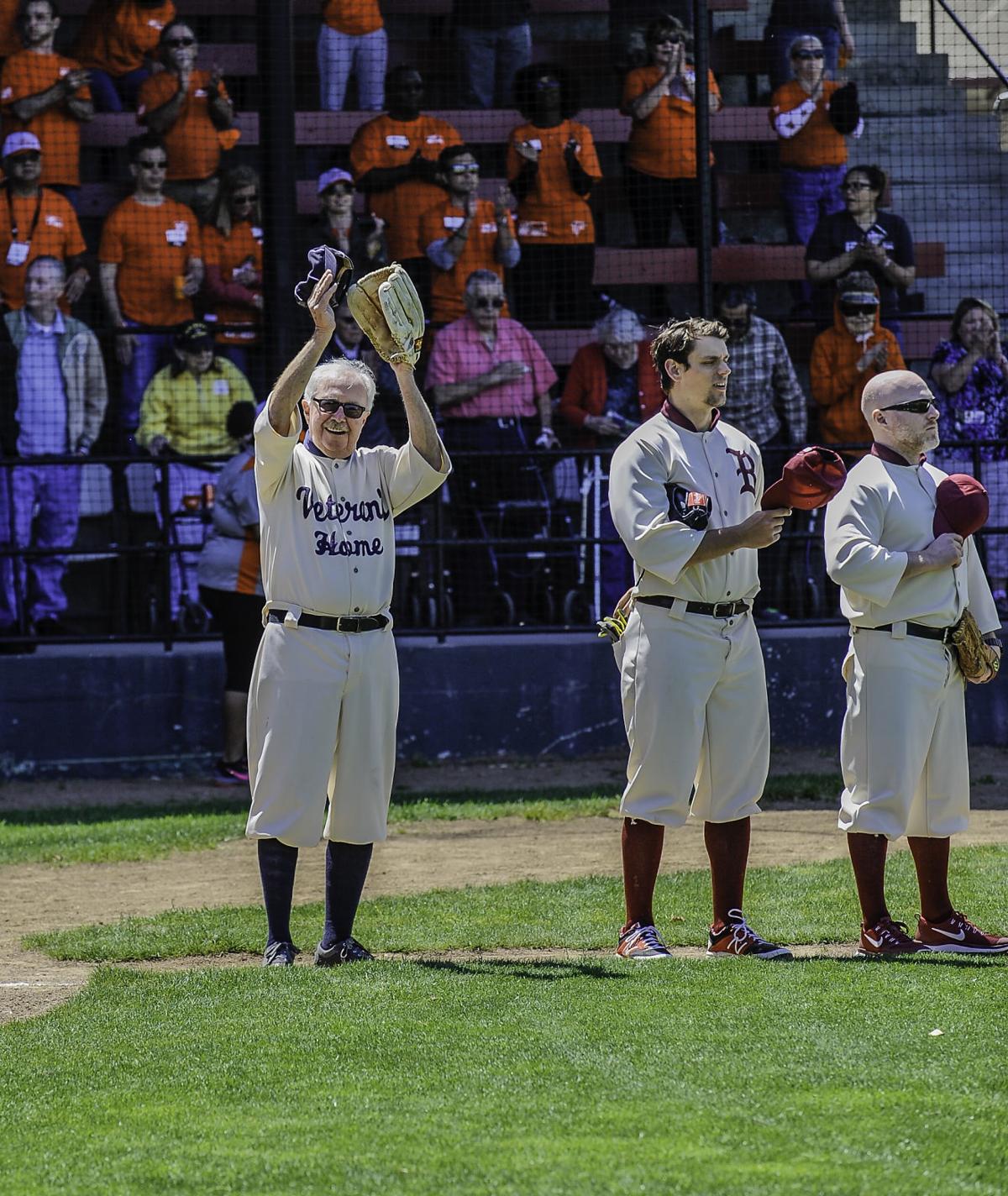 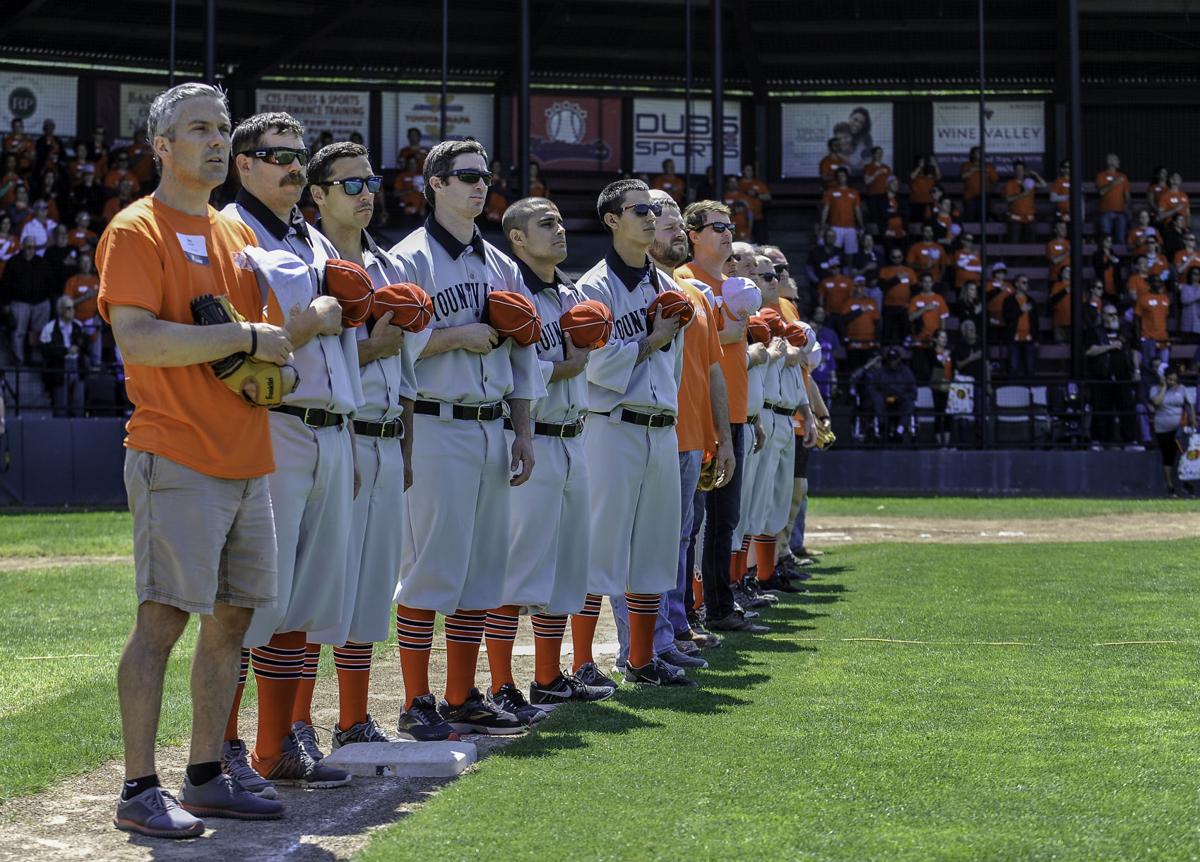 The Home Depot team is shown during the national anthem on Thursday at the Veterans Home of California's Cleve Borman Field in Yountville.

YOUNTVILLE — The Tug McGraw Foundation and the Veterans Home of California were the recipients of last week’s Team Depot volunteer event, which included the installation of 10 new kitchens in residences, a batting cage for baseball teams at Cleve Borman Field, the expansion of a chicken coop, and work with planter boxes.

It was a day-long event with work on multiple projects. It culminated with a softball game at Borman Field featuring the Veterans Home team Mixed Nutts, firefighters from the Napa County Fire Department in Yountville, and Team Depot volunteers from around the country.

The Tug McGraw Foundation organized the event in partnership with the Veterans Home, Home Depot, Habitat for Humanity, Cal Vet, and the Center for Volunteer & Nonprofit Leadership.

“Each one of these projects completed encourages quality of life by focusing on wellness of the mind, body and spirit,” said Jennifer Brusstar, the CEO and President of the Tug McGraw Foundation.

“Last year was the first year that there was a partnership between the Veterans Home and Team Depot and the Tug McGraw Foundation. All of this happens in one day. It was an amazing day. It’s to give back to the veterans.”

The Tug McGraw Foundation, headquartered at the Veterans Home, was established by Tug McGraw in 2003 to enhance the quality of life for kids and adults diagnosed with brain tumors – including vital support for their families, according to its website, tugmcgraw.org. Through fundraising, education and collaboration, TMF facilitates research focusing on the physical, cognitive, social and spiritual components of the disease, according to tugmcgraw.org.

“Diet and exercise play critical roles in the overall wellness of our vets,” said Tim McGraw, artist, actor and honorary chair of the Tug McGraw Foundation. “The tremendous generosity put forth by the Home Depot Foundation and 250 volunteers directly impacts our mission to improve the quality of life for our veteran residents here in Yountville.”

The projects included 10 kitchens that were installed in Section C, E, H and J, building planter boxes, and expanding the Tug McGraw Foundation Brain Food Garden. The kitchens are for residents in the independent sections.

“Today was the culmination of months of planning and preparation and hard work between the Home Depot Foundation, the Tug McGraw Foundation, and Habitat for Humanity,” said Josh Kiser, the Veterans Home public information officer, on April 26. “They come together with hundreds of volunteers, provide all the funding, the tools and everything to make these projects around the campus happen.

“What a wonderful day it is for all of these organizations, to come here,” said Russ Atterberry, the Undersecretary for CalVet with the State of California. “The new kitchens that they built, it’s just so nice to see the wonderful smiles on the veterans’ faces. It’s so special to them. It’s a long time coming for some of these upgrades and they are so, so excited.

“We couldn’t be more proud of all those folks that made it happen.”

The framing and walls for a six-bedroom, three-bathroom home were built on the Veterans Home grounds. It will be transported to Dixon and used by veterans’ families.

There was a closing ceremony and softball game at Borman Field, the home of the Napa Valley Baseball Club.

“We’re partnering with the Tug McGraw Foundation. They have a huge presence here. They do a fantastic job for these veterans. It’s really a big team effort.”

“We’ve been planning this for about 4-6 months. It call came down to just this morning.”

There are plans to turn the old baseball locker rooms at the Veterans Home into a baseball museum that will be dedicated to the game’s history at Borman Field. It will be known as the Borman Baseball Museum.

Tug McGraw was a relief pitcher who passed away in 2004 in Brentwood, Tennessee, at the age of 59. He was inducted into the Philadelphia Baseball Wall of Fame in 1999.

On March 12, 2003, Tug McGraw was working as an instructor for the Phillies during spring training when he was hospitalized with a brain tumor. When surgery was performed to remove it, it revealed the tumor was malignant and inoperable. Given three weeks to live by doctors, he managed to survive nine months. Tug McGraw lost his battle with cancer on Jan. 5, 2004.

He was a United States Marine Corps veteran and played baseball at the Veterans Home.

Brusstar, a former Napa Little League board member, was Tug McGraw’s caregiver during his illness.

Jennifer Brusstar, the CEO and President of the Tug McGraw Foundation, introduces the manager of the Yountville softball team, Wayne Brasher, on Thursday at Cleve Borman Field in Yountville.

The Mixed Nutts are shown during Thursday's softball game at Cleve Borman Field in Yountville.

The Home Depot team is shown during the national anthem on Thursday at the Veterans Home of California's Cleve Borman Field in Yountville.