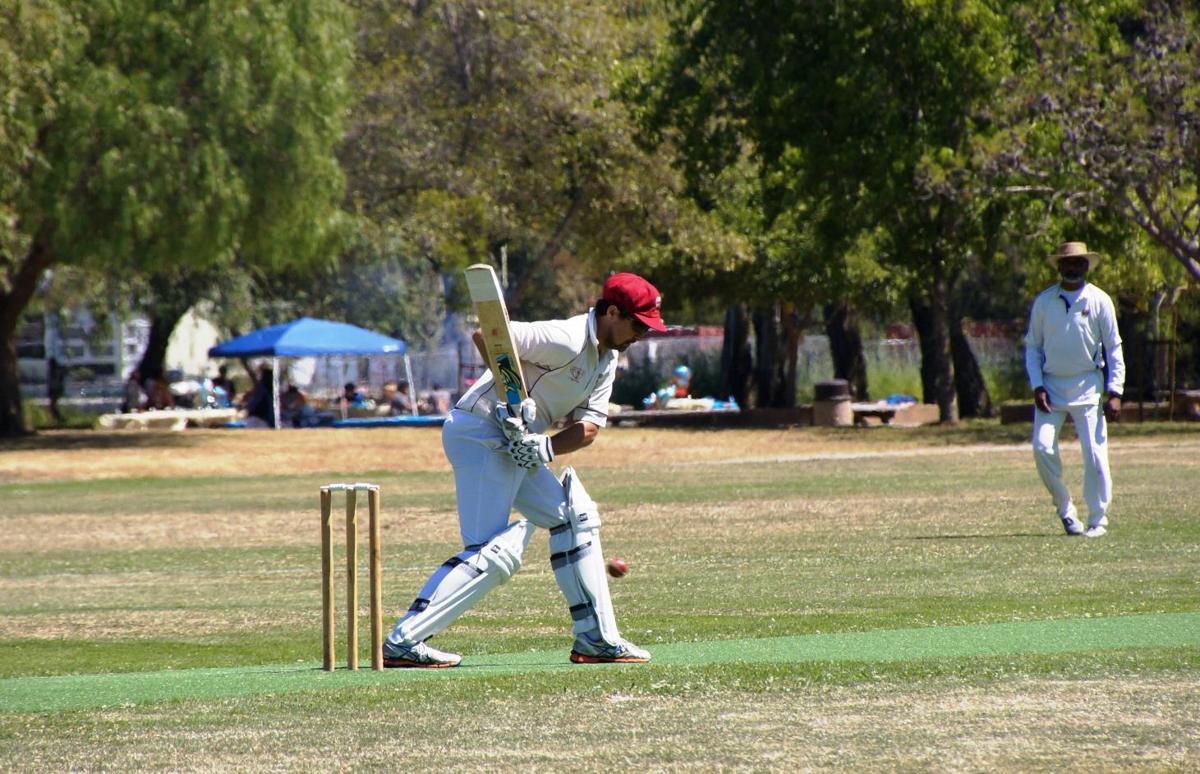 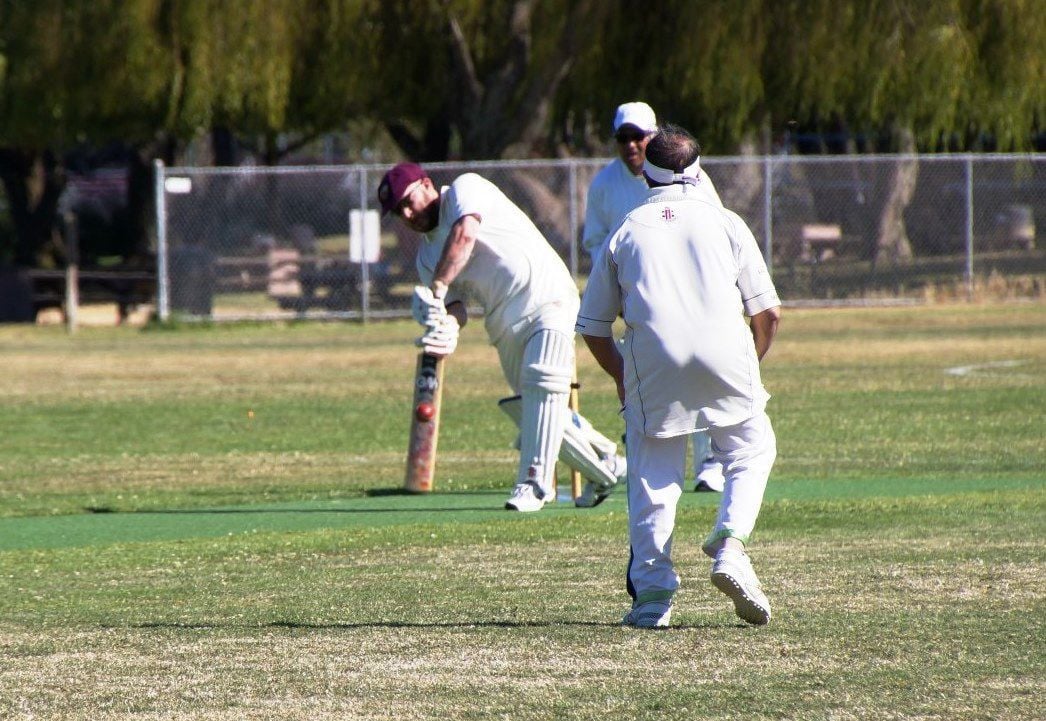 Napa Valley Cricket Club’s Jared Thatcher, left, bats on his way to a score of 42 runs without being retired at a recent against the Marin Cricket Club Socials. 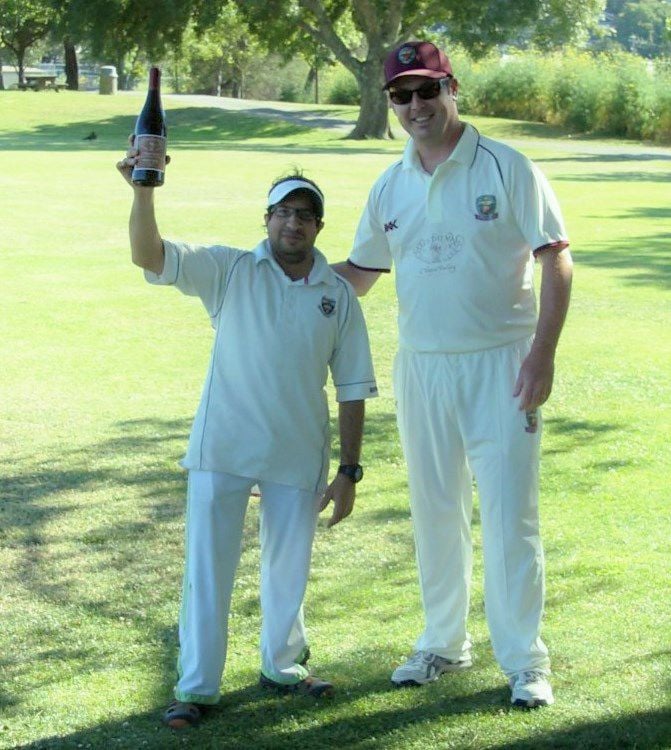 Continuing a trend for the 2016 season of standout performances from American members, Napa Valley Cricket Club stalwart Jared Thatcher had the game of his life in a recent victory over Marin Cricket Club Socials.

Thatcher excelled with the ball and the bat, returning two wickets for 20 runs off four overs while, with the bat, he notched 42 runs off 48 balls and was never retired as NVCC surpassed the Marin total in the 33rd over.

Bedeviled by old hockey injuries over the last two seasons to both his shoulder and ankle, Thatcher has worked hard on his game in the nets over the last few months and his return to full-game fitness was marked by an impressive all-around display.

The game at picturesque Piper Park in Larkspur was played in perfect conditions between two evenly matched teams. NVCC club captain Rob Bolch won the toss and opted to bowl first with the intention of restricting Marin’s scoring.

Bolch opened the bowling with the Maqsood brothers — Moe and Adersh — and each had tossed a strong four overs, keeping the top of Marin’s batting order contained. While only one wicket fell during this spell, the pair restricted Marin to only 26 runs.

The strong bowling from NVCC continued after the first change, with Bolch mixing up his bowling with Chandanpreet Singh and Thatcher alternating.

Singh, new to the NVCC this season, was unknown to the Marin batsmen and his first over of the day was impressive, showing pinpoint accuracy as no runs were scored.

Thatcher looked to find his line and length in his first couple of overs and, as the Marin batsmen thought they had the measure of him, he struck with two wickets in his third over off consecutive legitimate balls. Both of Thatcher’s wickets were well-caught in the field by Tim Kay, whose strong defensive performance was indicative of the way the NVCC’s fielders backed up their bowlers.

Thatcher’s wickets started a panic of sorts in the Marin ranks as Singh had their opening batsman, Kumar, caught in the next over. American NVCC member Jamie Johnson was able to retire him at first slip, and Singh himself was responsible for the run-out of Marin’s Vijay. In a three-over spell, Marin had gone from 50 for 1 to 67 for 5.

Marin limped to the 20-over drinks break after the loss of another wicket — bowled by Martin Mackenzie and caught by NVCC president Phil Bourke — and NVCC were in a strong position as Bolch kept Marin’s score obtainable.

The Marin wickets kept tumbling as Pete Sander took a spectacular catch at off the bowling of Kay, and Mackenzie picked up his second wicket off Marin’s Nikhil.

From here, Marin ate up balls for very few runs, struggling to deal with the bowling of Bourke, who rarely bowls in competitive matches. He bowled with Bolch and didn’t secure any wickets, but gave up only 13 runs from his five overs to keep the Marin run-rate low.

Bolch wrapped up the Marin innings by bringing the Maqsood brothers back on, and from each of them saw Marin finish with a total of 140 runs in 39 of their 40 overs — a low score by Piper Park standards.

Bolch opened the NVCC batting with the Maqsood brothers, which didn’t go as planned with Moe back on the sideline after just five balls for one run. Adersh joined him in the fourth over with only 12 runs on the board.

All of a sudden, it was beginning to look like it may not be NVCC’s day despite their strong effort with the ball and in the field.

But, two club stalwarts in Bourke and Thatcher stepped up to produce a game-defining partnership.

The pair played smart cricket by rotating the strike often with plenty of hard-run singles, and interspersed these with 10 fours — four by Bourke and six by Thatcher.

Their partnership of 72 runs, which saw them occupy the crease for more than an hour, staunched the flow of wickets and turned the game squarely in NVCC’s favor.

Bourke fell in the 28th over and Thatcher was joined by Johnson in the middle. With 28 needed to win the game, the pair of American batsmen brought the game home for NVCC, finishing the game with “not out” scores — Thatcher with 42 runs and Johnson with seven.

“We played well to restrict Marin to 140 in their innings as usually, here, at Piper Park, scores are 200-plus,” said Bolch. “The boys in the field did a fantastic job of backing up the bowlers, who worked hard to create wicket opportunities. Everyone contributed which was very heartening with some great catching from Timmy Kay, Pete Sander and Jamie. Slips-catching has never been one of our strengths, so to have Jamie take one at first slip was a great way to welcome him to the club. And Chan (Singh) and that run-out really helped to unhinge the Marin batsmen right after Jared’s two wickets.

“We were really struggling early on with the bat as a few of the lads who don’t normally get the opportunity to bat up the order were having their turn.” he continued. “We steadied a bit with Pete Sander staying in and occupying the crease for eight or so overs early on and helped stop the bleeding of wickets in our innings.

“And then Jared topped off his incredible bowling performance with his best batting performance ever for the club. The time he spent in the middle with Phil was key to us winning this game and he can be very, very proud of his knock of 42 runs, and a ‘not out’ to boot.”

The NVCC has worked hard to grow the numbers of American members in their ranks and, for the third game in succession, they boasted three American-born players in their team.

Thatcher was joined on the field by Johnson recently when he returned from the East Coast, and Cameron, who has already impressed this season with a great knock with the bat in the previous game against Marin and excellent fielding whenever he plays.

“It’s important for the future of the club that we have Americans playing cricket with us” said Bourke, “and this is true not just in the Napa Valley, but in America as a whole. Cricket is growing in America with a lot of effort and resources being poured into the sport from the ICC (International Cricket Council, the world governing body of cricket), and we’re proud of our efforts at the local level to be increasing participation by American’s that are new to the game.

“What’s even more heartening is that in every game this season, substantial contributions with bat, ball and in the field have come from this growing segment of our membership, and we hope this continues.”

After the match, Bolch presented the Clos du Val Man of the Match award to Marin’s Bilal for his contribution to the game.

Napa Valley Cricket Club’s Jared Thatcher, left, bats on his way to a score of 42 runs without being retired at a recent against the Marin Cricket Club Socials.