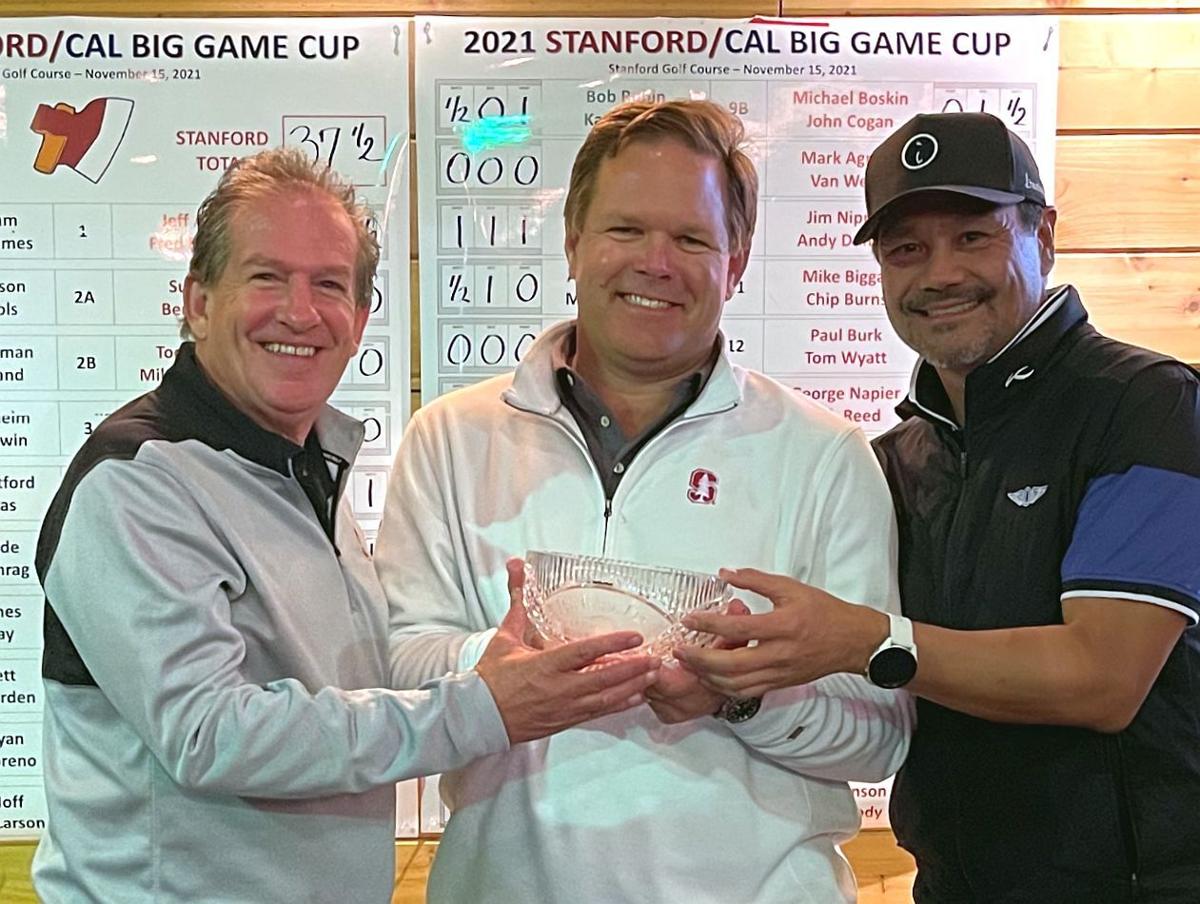 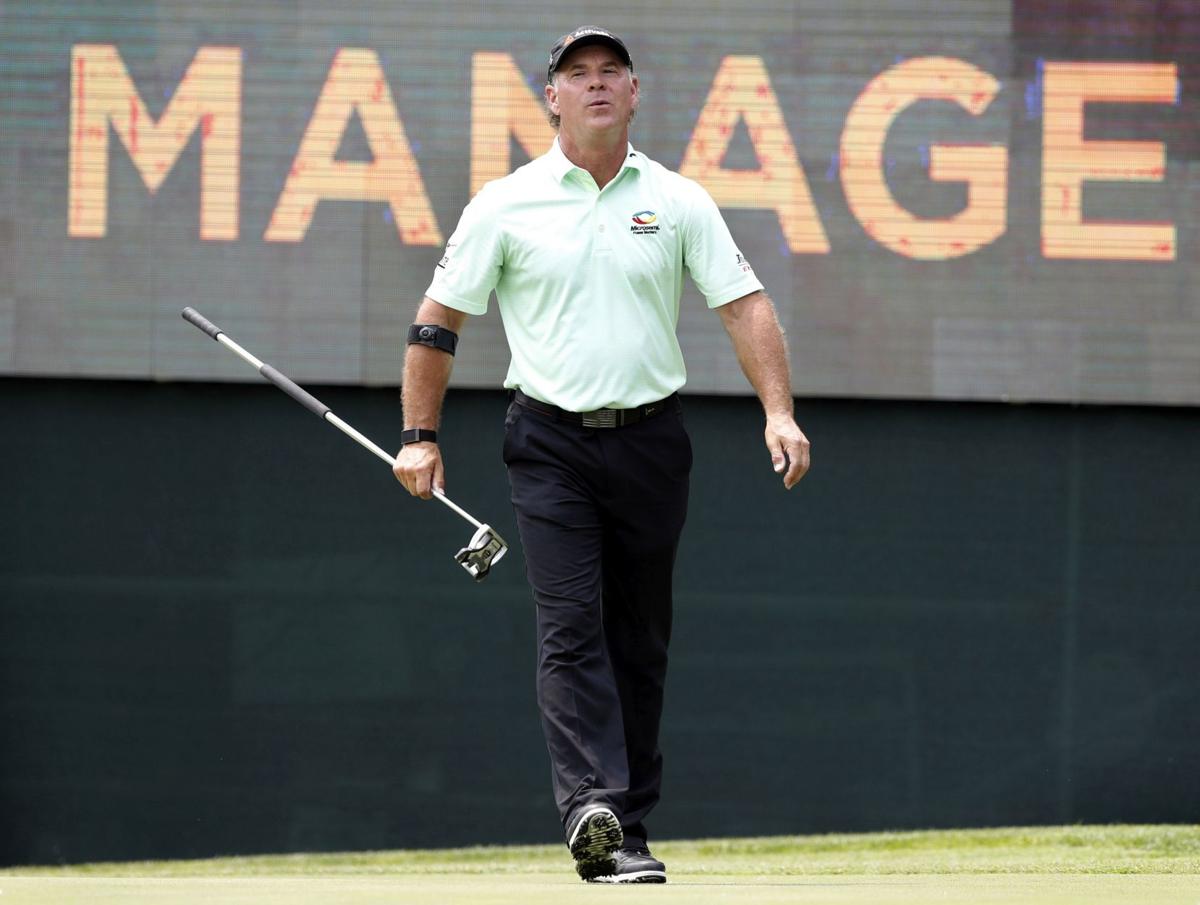 Vintage High alumnus Scott McCarron reacts after missing a putt on the 17th green during the first round of the PGA Tour Champions Principal Charity Classic on May 31, 2019 in Des Moines. 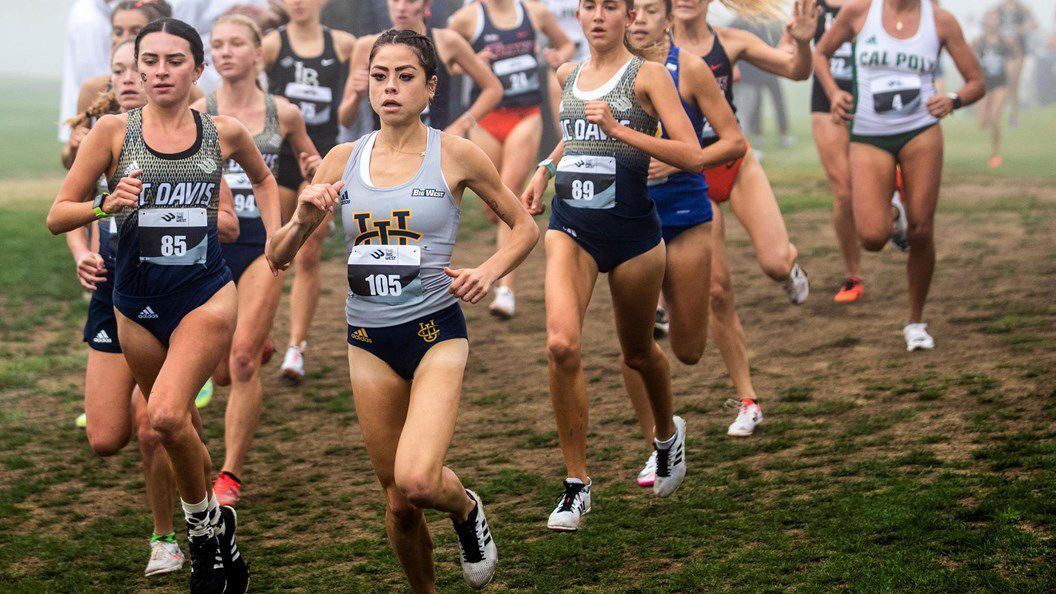 Yarris is a 1980 Stanford graduate who played golf on the Cardinal men’s teams.

He shot 78 and his Stanford partner, Alex Mack also shot 78 to win their match against Cal.

“Both head coaches, Conrad Ray from Stanford and Walter Chun from Cal, captained their teams and spoke about their programs,” said Yarris.

Yarris is a 1975 Vintage High graduate and is in the Crushers’ Athletic Hall of Fame.

He played two years of golf at Napa Valley College (1975-77) and is in the Storm’s Athletic Hall of Fame.

Scott McCarron, a Vintage High School graduate who is in the Crushers’ Athletic Hall of Fame, said he has “every intention” of starting the 2022 PGA Tour Champions’ season at the Mitsubishi Electric Championship at Hualalai, Jan. 20-22, at Hualalai Golf Course at Ka’upulehu-Kona, Hawaii. It’s the first event of the season.

The limited-field event features winners of PGA Tour Champions events over the past two years, as well as winners of senior major championships over the last five years, and several prominent sponsor exemptions, according to a press release.

McCarron, the 2019 Charles Schwab Cup champion and an 11-time winner on the PGA Tour Champions, has not played in an event since July 4. He had surgery on his ankle and foot last year.

“I have every intention of playing at Hualalai,” McCarron said in a report at pgatour.com on Dec. 1. “I’m sure I’ll be able to play. I don’t know if I’ll be able to walk 18 by then, but I can take a cart in those first few events.”

Said Bernhard Langer: “Scott is not just a great champion but also an amazing friend and a very positive person. We missed him the last few months and very much look forward to having him back on Tour soon.”

McCarron, a resident of Mooresville, North Carolina, had surgery due to an injury.

“I didn’t know it was that bad,” McCarron said of the injury in the report. “I didn’t get an MRI. I thought it was gout, thought it was a couple of other things. I got cortisone shots, just tried to tough it out. But I just couldn’t play with it. I couldn’t walk on it, let alone swing with it. I tried to ice it every day and take medications just to get out there and play. Then I finally bit the bullet and had the surgery.”

McCarron, 56, turned pro in 1992 and won three times on the PGA Tour. He joined the PGA Tour Champions in 2015 and looks forward to returning.

“I think I will be as good as I’ve ever been and even better at some point (in 2022),” he said in the pgatour.com story. “I just kind of need to keep those goals down a little bit starting out because I haven’t played competitively in a long time. But if I can go ahead and swing and get after it without pain, there’s no reason I can’t come back and play some of the best golf of my life.”

“From 2017-2019, it felt like McCarron was the best player on the Champions Tour. With the influx of rookies, people may have forgot that McCarron is an 11-time winner on PGA Tour Champions. If he returns healthy, it’ll be interesting to see if he can regain his form as one of the best players on the Tour,” the report said.

Thomas Hatton and Nathan Schwarze of Napa High and Joseph Ellis of Vintage are in SportStars Magazine’s NorCal Wrestler Rankings, announced in a report at sportstarsmag.com on Jan. 5.

Max Homa announced on Twitter, @maxhoma23 on Dec. 31, that he is “the first-ever Fortinet PGA athlete Ambassador.”

“I look forward to working with this global leader in cybersecurity & their entire team!!!” Homa announced on Twitter.

It was Homa’s third career win on the PGA Tour.

The Fortinet Championship is an official FedExCup event and is the first of 48 events on the PGA Tour schedule.

Fortinet, a global leader in broad, integrated and automated cybersecurity solutions, is the title sponsor of the Napa Valley tournament.

Hannah Chau, a junior, was named All-Big West for the second time in her career after finishing seventh at the Big West Championships for the UC Irvine women’s cross country team in late October at Wildhorse Golf Club in Davis.

Chau, UC Irvine’s No. 1 runner, finished 32nd at the NCAA West Regional Championships at the Haggin Oaks Golf Complex in Sacramento in mid-November. She had a time of 20:38.8 for the 6,000-meter course.

Thea Michovsky began her junior season on Sunday by placing 17th in the uneven parallel bars for the host UC Davis women's gymnastics team in a three-way meet with Michigan State and Sacramento State at the University Credit Union Center in Davis.

The two-day event was Dec. 29 and 30 at Del Monte Golf Course in Monterey and Poppy Hills Golf Course at Pebble Beach.

The two-day event was played in Birmingham.

In Memoriam: Shoopman remembered as kind, and one of a kind

Vintage High alumnus Scott McCarron reacts after missing a putt on the 17th green during the first round of the PGA Tour Champions Principal Charity Classic on May 31, 2019 in Des Moines.