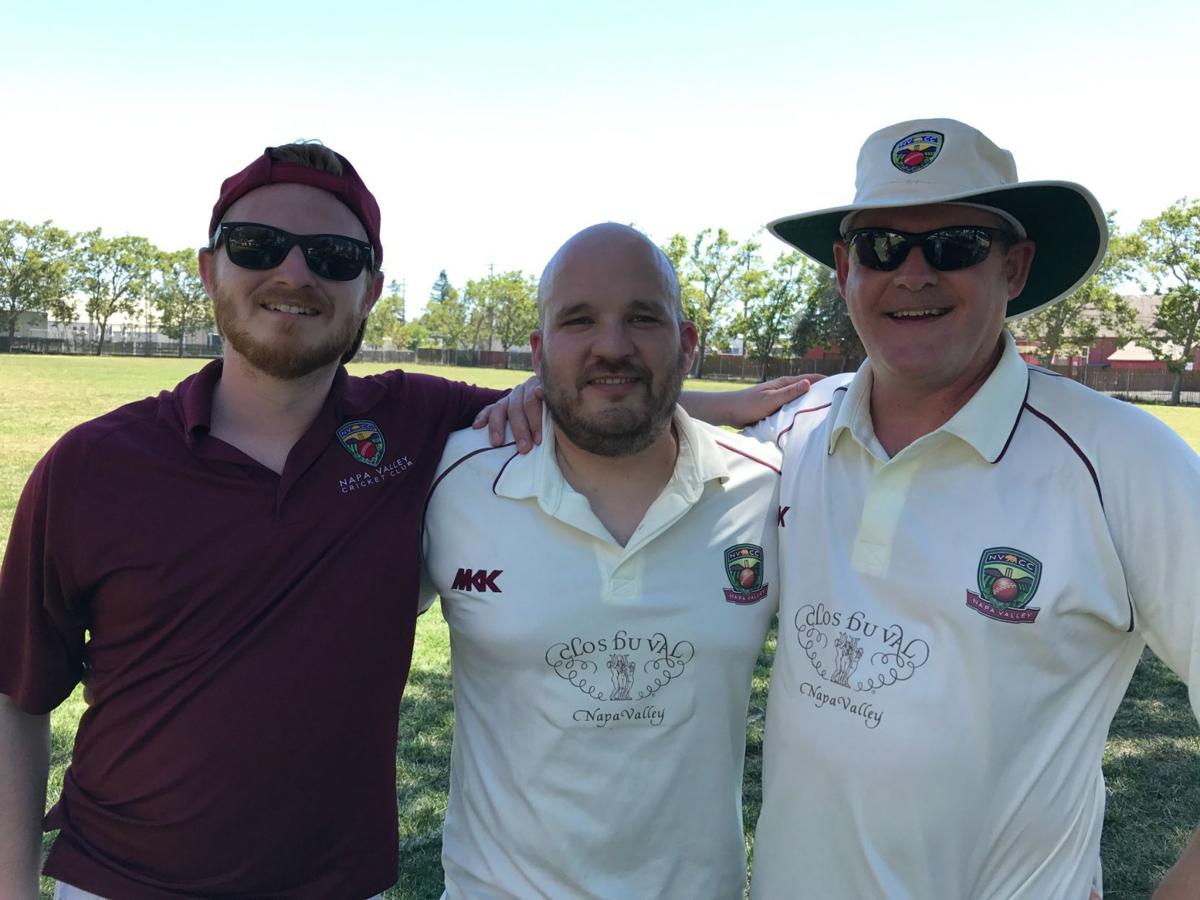 Napa Valley Cricket Club’s 2017 American playing members pose for a photo. They are, from the left, Peter Cameron, Jared Thatcher, and Jamie Johnson. 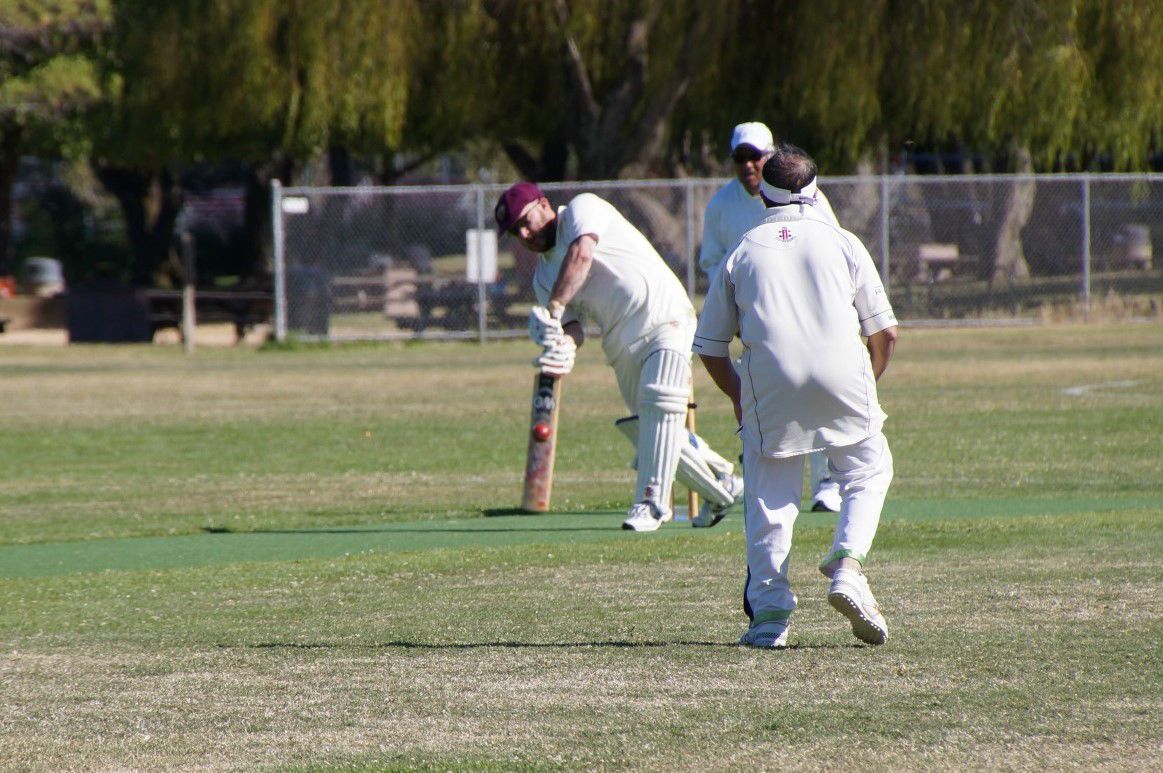 As the U.S. celebrated its independence from the “British Empire” last week, the most quintessential British sport, cricket, has gained a foothold here in the Napa Valley and is popular with a small but growing number of Americans.

Founded in 2012 by a group of cricket loving expatriates from all over the world, the Napa Valley Cricket Club (NVCC) has, in a short period, established itself as one of the best organized clubs of its kind in the country.

The Napa Valley name, allied with the warm hospitality that the club extends to visiting teams, means that there is no shortage of teams wanting to come and play.

After five years based out of the Napa County Fairgrounds in Calistoga, the NVCC will play their 2017 matches at both the Napa Valley Expo and McGrath Field at Napa State Hospital. In 2018, the club hopes to host all of their home matches at the Napa Valley Expo in downtown Napa. The move to Napa has seen an infusion of new members, with over 30 playing members and total membership just under 100.

Among those members are a number of Americans who have discovered cricket through various means, and make up an important element of the club’s diverse membership.

A member since the founding of the club back in the winter of 2011-12 is club treasurer, Jared Thatcher, who was born in Pontiac, Michigan. Thatcher first experienced cricket while attending Graceland University in Lamoni, Iowa.

“There was a strong South Asian community on campus while I was at Graceland” said Thatcher, “and playing cricket was their thing. It was the first time I had seen the game live and I found it intriguing. I think that, for Americans who’ve played baseball, the comparisons between both bat and ball sports make explaining the game of cricket easier. But the intricacies of cricket take a little bit of practice.”

Thatcher is typical of Americans who make excellent fielders in cricket with his “baseball arm.” Thatcher glows when he reminisces on his favorite playing memory while playing for the NVCC – a 42-run batting stand against the Marin Cricket Club Socials in 2016 at Piper Park in Larkspur.

With a Scottish father who coached cricket at the historic Philadelphia Cricket Club, it’s no surprise that Pete Cameron found his way to the NVCC in 2015.

Born in Syracuse, New York, Cameron embodies that “baseball arm” philosophy as one the deadliest ground fielders in the club. Cameron has also shown significant improvement with the bat in his short time with the NVCC most notably notching 24 runs just this May against local rivals Marin.

“I love being part of such a diverse group who share a common love of cricket” said Cameron, “with that diversity encompassing age, nationality, religion, careers, and even cricketing skill set. The social aspect of the club is unlike most clubs here in America as I’ve formed friendships with many members of the club off the field, too.”

In what could be interpreted as a metaphor for life, Cameron says “cricket is a game that rewards patience, focus, a good game plan, and a bit of bravery.”

Twenty-four years living in England were what got Jamie Johnson into cricket. Born in Dearborn, Michigan, Johnson lived and worked in England for many years until he returned to the East Coast.

His love of the game continued there as a member of Merion Cricket Club where he was lucky enough to be involved in a number of annual cricket tours, one of which took him to the Napa Valley in late 2015.

“The reception from the guys at the NVCC was quite simply astounding” said Johnson. “They were so incredibly hospitable to our touring party, arranging visits to wineries, making dinner suggestions and reservations, and serving us the most incredible mid-innings lunch that I think I’ve ever had on tour. I’d been on tour to the Western Cape in South Africa and played on some of the most incredible grounds there, but the crew at the NVCC literally bowled me over with their setup and hospitality.”

Recently retired, Johnson relocated to the West Coast in early 2016, and knew there was only one club that he’d play for after that move was complete. He is now a regular behind the stumps keeping wicket for the NVCC and, like both Thatcher and Cameron, is proving handy with the bat with a recent knock of 24 runs without an out in the inaugural “NVCC City v. County Challenge Match” at the Napa Valley Expo.

Besides playing members, the NVCC boasts a sizable number of American “social” members who have joined the club mainly for the strong social program of events that club puts on.

Local realtor Bill Wagner has been a member and sponsor for a number of years, and has even hosted the clubs famous season-opening Curry Night at his home.

“It’s great to see something different, sporting-wise, here in the Napa Valley” said Wagner, “and it’s been great being part of the club and seeing it grow over its short life. Now that the club has relocated to Napa, I’m looking forward to watching more matches and bringing along family and friends to introduce them to, and explain as best I can, the game of cricket.”

For those interested in learning more about the game of cricket, the NVCC will host their annual Napa Valley World Series of Cricket, pitting members from America & Australia against members from the Rest of the World. This match takes place at the Napa Valley Expo at 10:30 a.m. on July 23. Admission is free.

Kids activities will be provided. Food, beer, and wine will be on sale and club members will be happy to answer any questions on the intricacies and quirks of the game.

NVCC are currently working on a practice schedule for those who would like to get more involved. Stay tuned to their calendar page for more details.

Sure, many pro baseball fans might not be thrilled to see either team make the series. Read on to find out why. But Atlanta toppled the 106-win Los Angeles Dodgers to win the National League pennant. See the highlights.

A roundup of recent high school volleyball results in the Napa Valley.

Napa Valley Cricket Club’s 2017 American playing members pose for a photo. They are, from the left, Peter Cameron, Jared Thatcher, and Jamie Johnson.