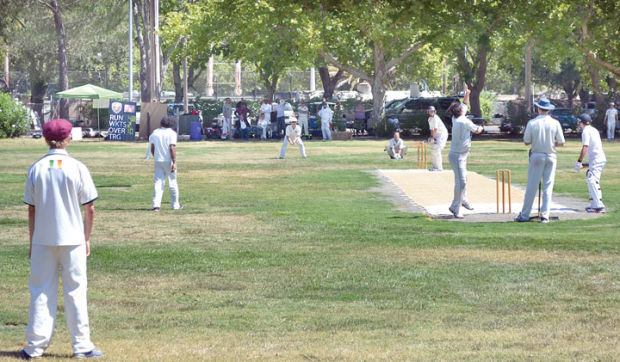 Irishman Andrew Healy had the game of his life with both bat and ball as the Napa Valley Cricket Club swept Marin at the Napa County Fairgrounds last Sunday, sweeping the three-game season series after two earlier wins in Larkspur.

Napa Valley’s captain for the day, Australian Rob Bolch, set out his stand early by announcing both the batting and bowling order ahead of the game. Bolch surprisingly had listed eight NVCC players to bowl in pairs of only four overs per pair.

It was a strategy that was to pay off for Bolch and his team as Marin was never able to settle while facing such a varied NVCC attack. Just as the Marin players were getting settled, Bolch changed the bowlers. This helped keep the Marin score low and very chasable, and shared the workload through the whole team.

The bowling highlight for NVCC was the 3 over spell from club vice president Andrew Healy, whose slow and loopy deliveries deceived three well-set Marin batsmen. Having taken two wickets in his two overs, Bolch bowled Healy one more before drinks and while it was an expensive over runs-wise. It brought the prized wicket of Marin captain Raj Thiagaraj, thanks to a solid catch at deep mid-wicket by New Zealander Martin Mackenzie. The rest of the Marin wickets were shared throughout the bowling attack, with a total of six bowlers picking up wickets. Healy’s son Caen, a sophomore at Napa High School, bowled a short spell of 2 economical overs of swing bowling for the loss of only two runs.

After lunch, Napa Valley started the chase with opening Australian pair Pete Carson and Scott Curwood both losing their wickets cheaply and quickly. Curwood lost his to the lightning-fast fielding of Marin’s American-born fielder, Joe Slater.

It was then that Andrew Healy and Inderjeet Singh, prolific all season with the bat, came together for NVCC to stanch the flow of wickets. The pair put on 31 runs for the seventh wicket, with Healy playing a watchful inning that included 28 dot balls of the 33 that he faced. The five balls that he did play went for 4, 1, 6, 1 and 6, respectively, while Singh notched up 24 off 20 balls at the other end.

The loss of both of these wickets brought Bijoy Ojha and Mackenzie to the middle. While Marin thought it had the game in the bag, Ojha and Mackenzie had different ideas. Their ninth wicket partnership of 103 (both not out) included 15 boundaries (13 fours and two sixes) and, as in the previous game against Sonoma, Ojha hit the winning runs — again a 4, with just 2 overs to spare.

“I know how much it means for our team to win games, so I laid out our plan early and everyone was on board with it,” Bolch said. “We had a couple of wobbles with both bat and ball, but the team did a great job of sticking to their tasks and I think we thoroughly deserved our win both in this game and the season.

“It was great to have Bijoy to come in late in the batting order as he has developed a real talent for closing out games this season with his nerves of steel. And as for our top bowler of the day today, Andrew Healy, well, maybe the other captains need to consider him a secret weapon in our bowling attack for future games.”

Said Marin’s Thiagaraj, “It was yet another great game of cricket against the Napa Valley boys and truthfully we thought we had it wrapped up when they were at 36 for 6. But credit to them for such a strong comeback. I think we may have sneaked home had we taken our late opportunities in the field with catches. As always, that old cliché that “catches win matches” will haunt us for a time to come after this game.”

The traditional Clos du Val “Man of the Match” award was given to Main CC’s Frank Gilmore for his all-around performance with the bat (37 off 40), ball (18 off 7, including 1 maiden) and his greatly appreciated honesty in the field.

Visit napacricket.com for more information about the NVCC.