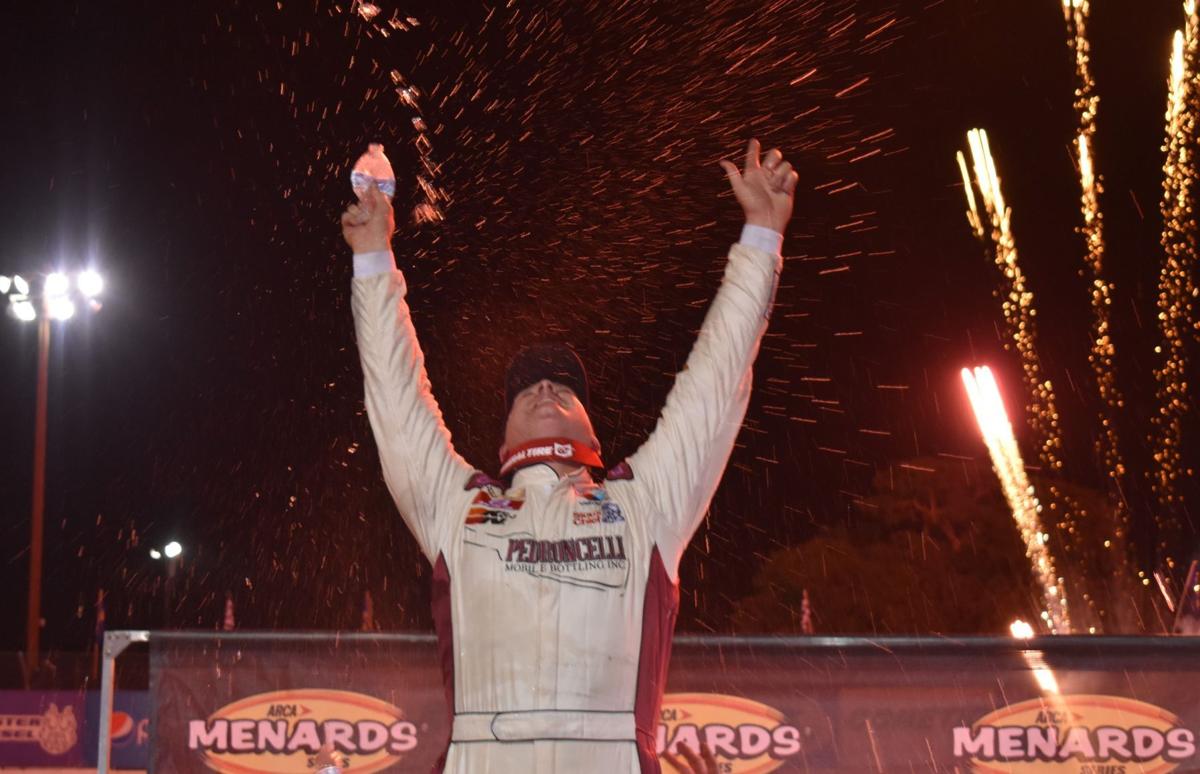 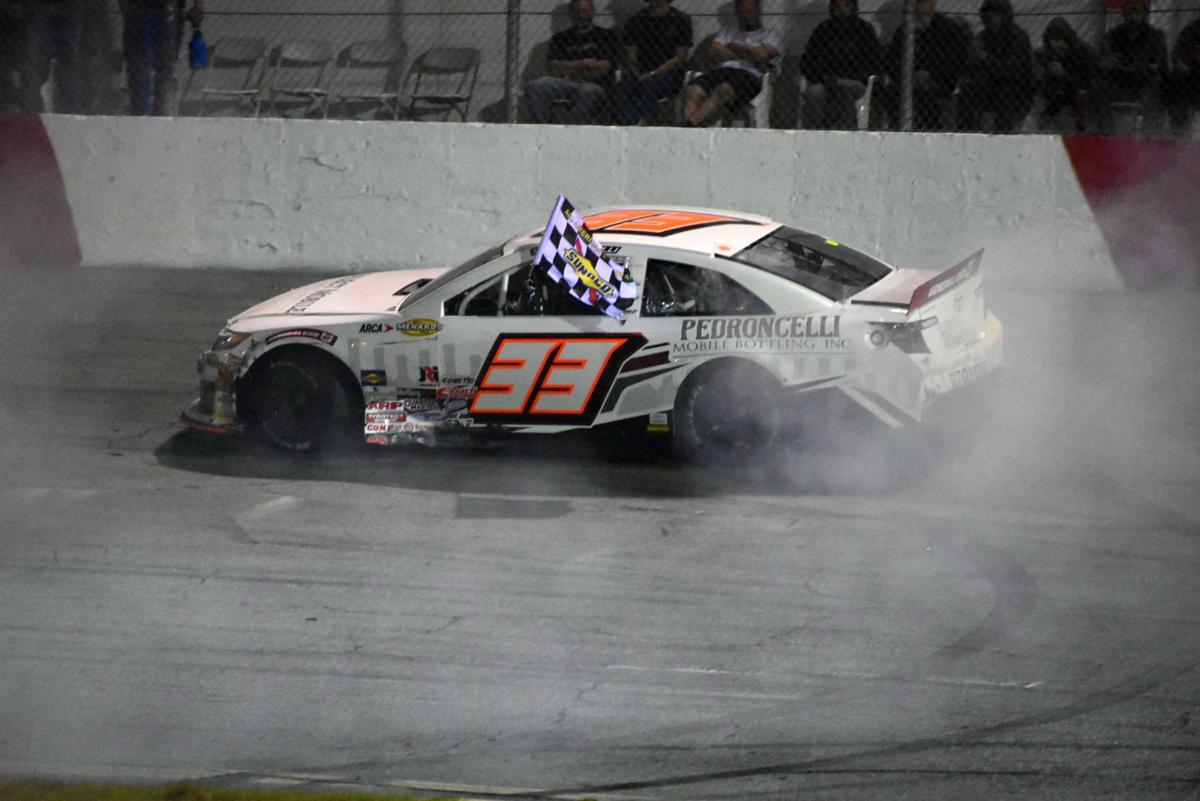 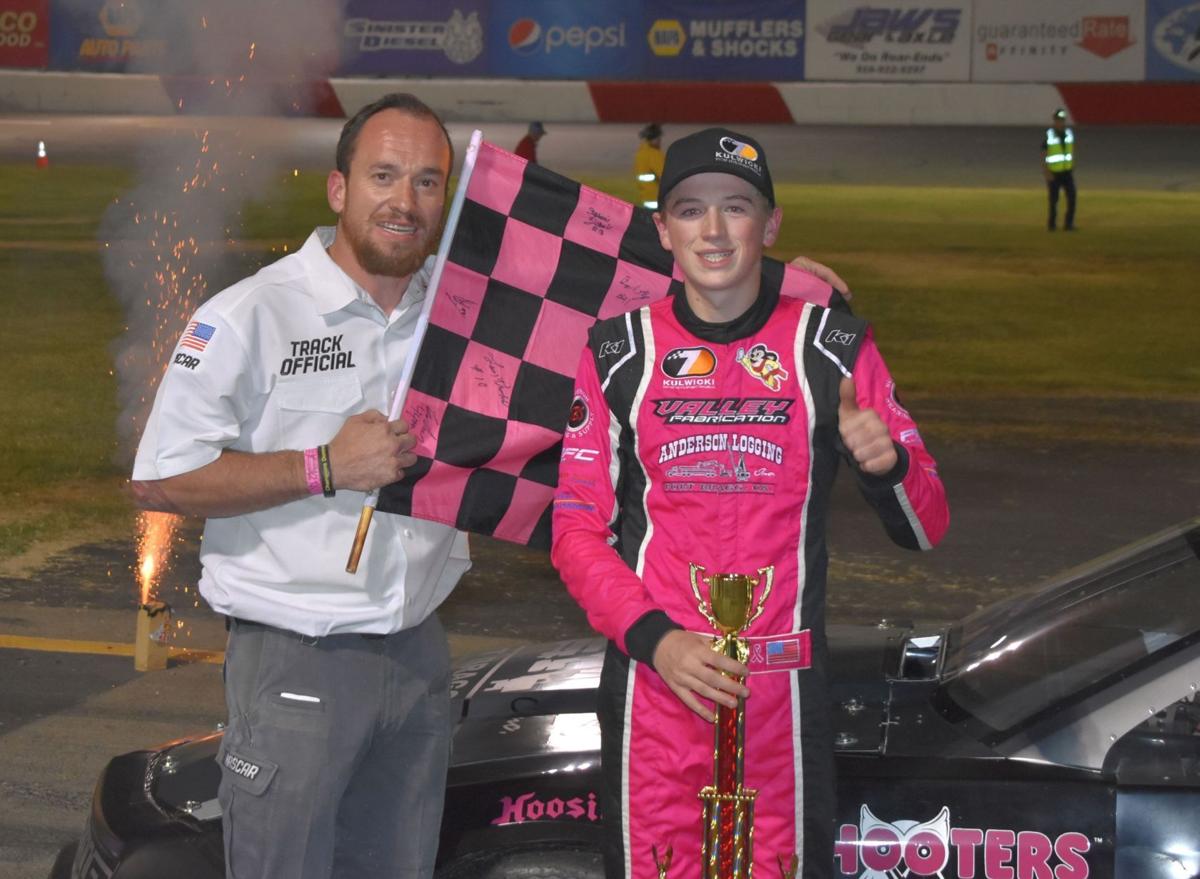 North Carolina’s Taylor Gray was bounced from contention with a spin in turn two on lap 47 before being tagged by Boise’s Josh Fanopoulos. Heavy fluid on the backstretch necessitated a red flag with 100 laps remaining in the contest. The ensuing restart played to leading as he used the inside to lead lap 53. Both Brian Kamisky of Anderson and Japanese driver Takuma Koga spun for the next caution. Drew held the lead from the inside on the restart.

Pedroncelli and Idaho’s Travis Millburn came together fighting within the top-five and rookie Jake Drew of Fullerton maintained the lead on that restart as well. Love battled with Joey Iest for third while Moore tracked down Drew in lapped traffic. Moore used the outside to drive past Drew on the backstretch lead lap 90.

The wildest action occurred when the green flag came back out. Moore restarted outside Drew, then attempted to cut in between Drew and Iest into Turn 1. Iest and Moore had contact, shooting Moore up the hill into Drew. Love was tangled up in the incident as well. Moore, Drew, and Love would continue in the race but lost numerous positions. Love then spun on the frontstretch battling with Drew on the restart.

That caution set up a one-lap shootout with Iest in the lead and Pedroncelli restarting inside of him. Pedroncelli put together a strong run on the final lap, passing Iest into Turn 3 to become the next first-time West Series winner at Roseville.

In NASCAR Berco Redwood Late Models, Zampa was in second place when a spinout involving two other drivers required a caution flag on lap 23. Michael Mitchell of Loomis held the lead over Zampa on the restart while Cole Moore drove up to third. Zampa hounded Mitchell for the top spot, taking over the lead with an inside pass on the backstretch on lap 43.

Zampa took his sixth win ahead of Kylie Daniels, Cole Moore and Mitchell with Calvin Hegje winning a battle for fifth over Granite Bay’s John Moore, who wrapped up his first career track championship.

The action closed the 2021 circle track season at the one-third mile oval.

BERKELEY — USC will play its final game of the season Saturday in Berkeley, but the Trojans won’t have Lincoln Riley calling plays from the si…