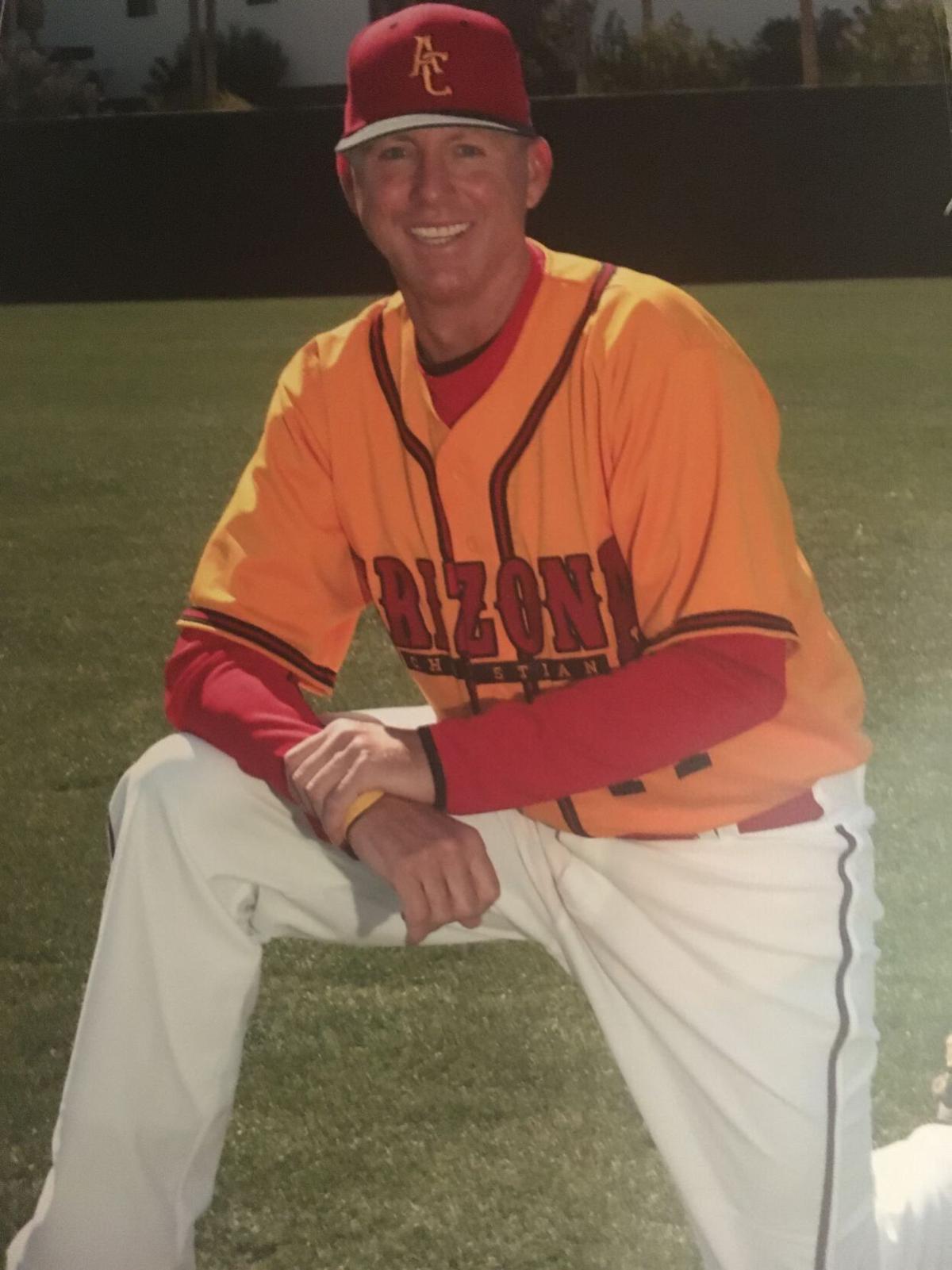 Tim Haubursin, shown during his coaching days at Arizona Christian University, was one of the best pitchers in Calistoga High baseball history. He passed away on March 31 at the age of 58. 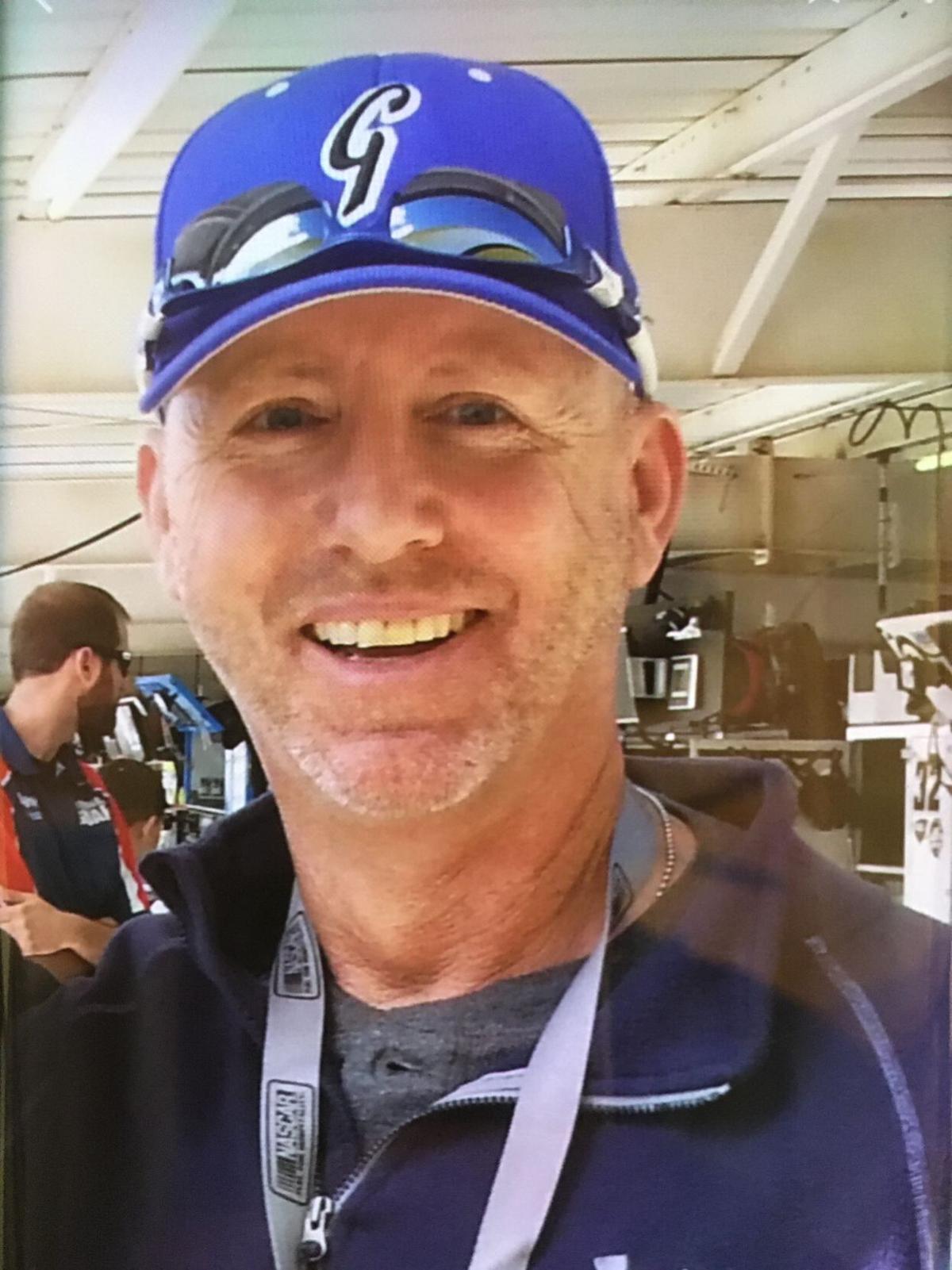 Tim Haubursin graduated from Calistoga High in 1980 after transferring from Tamalpais High in Mill Valley. He went on to play baseball at Sonoma State Universtiy and Cal Poly-San Luis Obispo before getting into coaching. 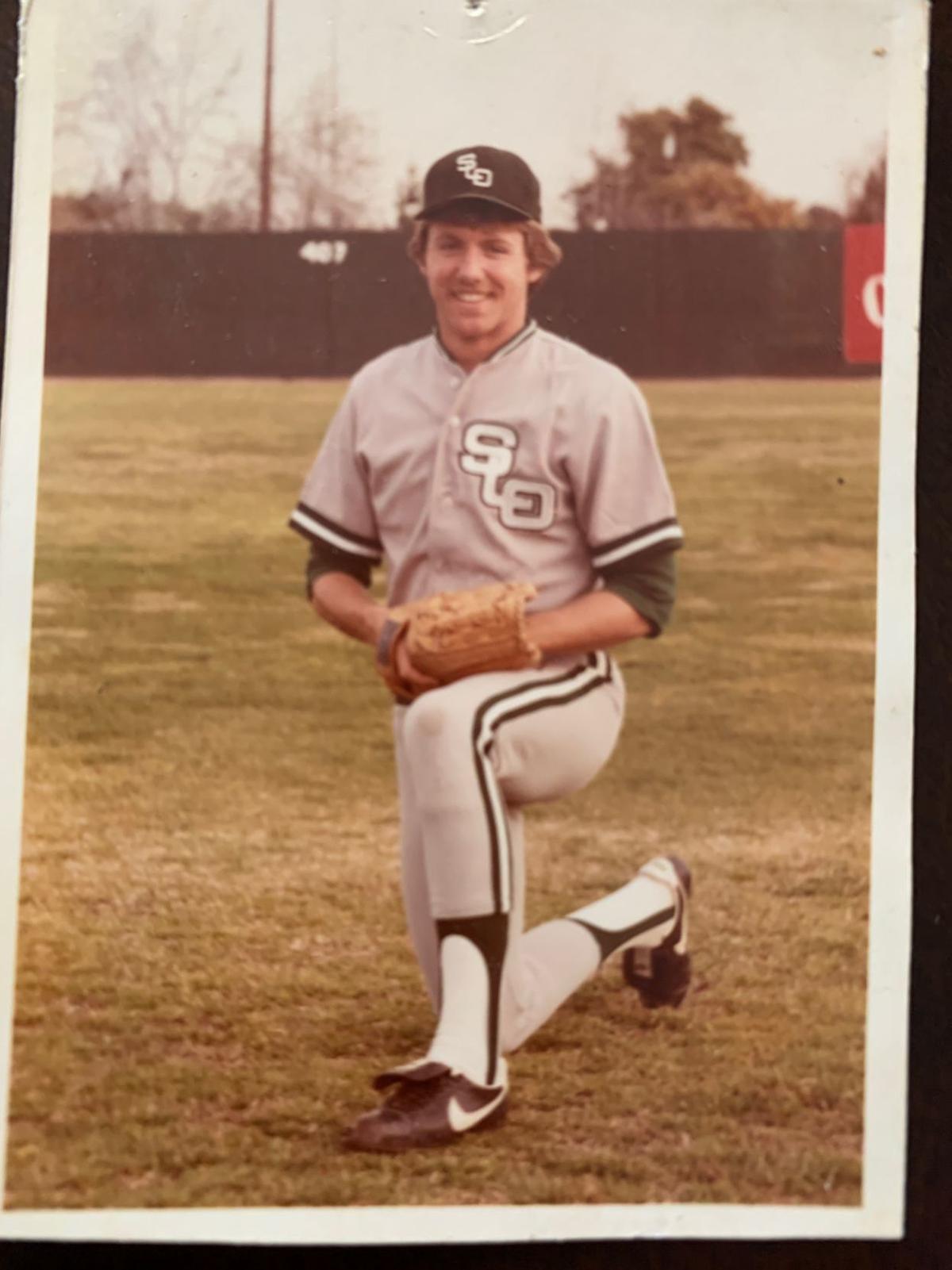 After graduating from Calistoga High in 1980, Haubursin played one season at Sonoma State before transferring to Cal Poly-SLO, where he played until 1985. 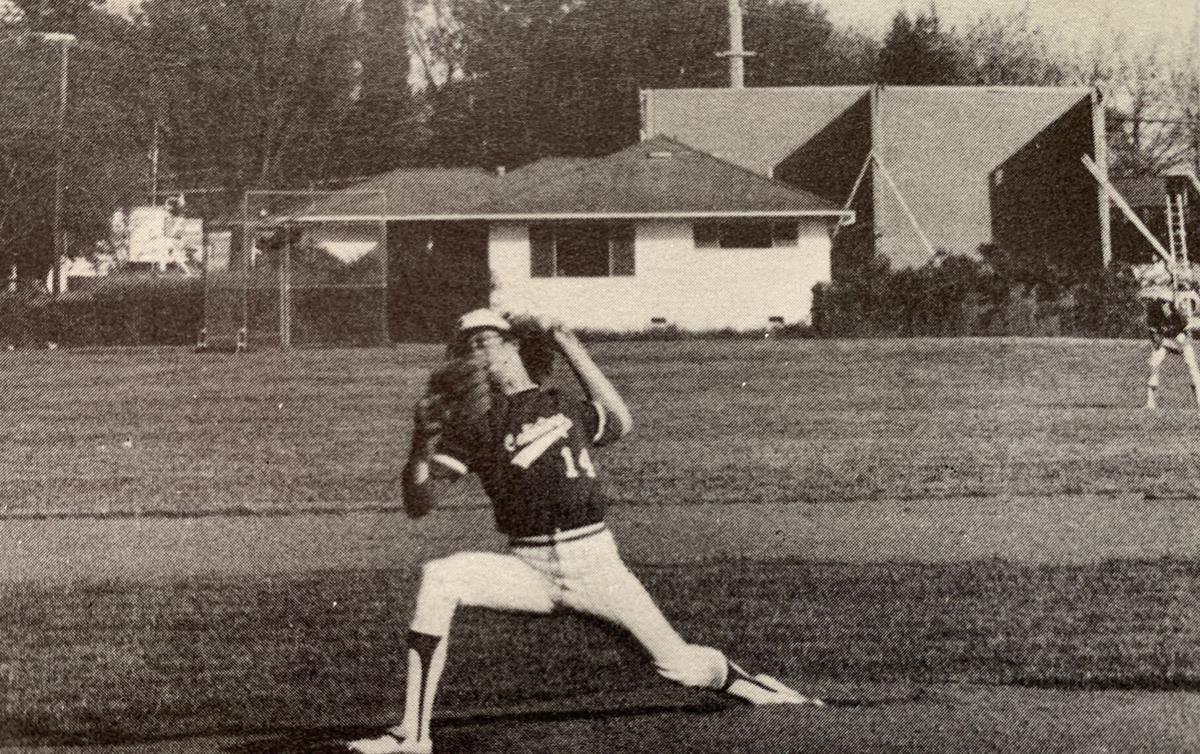 There were usually a few pro scouts in the stands when Tim Haubursin pitched for Calistoga High School in 1980, then a senior for the Wildcats.

They were there to get a good look at the hard-throwing left-hander, to see the speed and movement on his pitches and the way that he went after hitters, challenging them with a combined mental and physical toughness throughout the course of a game.

Those close to Haubursin – his brother, Scott Haubursin; his sister, Susie Wycoff; his coach, John Duby – remember him always being locked in, confident and competitive, ready to go, with an absolute love for the game.

“When he was being scouted, there was a (Philadelphia) Phillies scout I was talking to that had watched him throw a couple of games,” Duby recalled. “I said, ‘Any idea how hard he is throwing?’ He said, ‘Yea, my estimate would be he’s at 88, 89 (mph).’ ”

It was 40 years ago, and it was a sight to see with Haubursin, one of the best in school history, on the mound.

“Baseball was his thing,” said Scott Haubursin. “He was always really comfortable being on the mound. He just loved to pitch. He loved baseball. He loved the challenge of it.

“I’ve always told people this: my brother was not only the best baseball player I’ve ever seen. He was just the best athlete I’ve been around. From the time we were little kids, when we played Little League, he was a pitcher and was a great hitter. He just had a great affinity for the game. He had a great understanding of the game very early on.”

Tim Haubursin, an all-league and all-county player during his high school days, passed away on March 31 in Paradise Valley, Arizona, due to melanoma, his family said. He was 58.

Tim Haubursin was in his second season as the pitching coach at Santa Barbara City College. He was involved in baseball for a number of years, serving as the pitching coach for Arizona Christian University (2010-13) and Gateway Community College in Phoenix (2013-15). He worked as the recruiting coordinator and pitching/throwing coach for the Arizona Baseball Ranch for the last 5 1/2 years. He was the pitching/throwing coordinator at Southwest Performance of Thousand Oaks, Calif., for the last four years.

Tim Haubursin was also the pitching coach in 2018 for the Santa Barbara Foresters, who won a national championship in the National Baseball Congress, a semi-pro league with teams operating in the U.S. and Canada.

“He was dedicated to baseball,” said Duby, Calistoga’s head coach from 1973-1984. “He loved the game and he worked hard to get better. He had sound mechanics. We worked on the mental approach – when to throw pitches, when to throw your changeup, pitch selections, the mental part of the game.

“He just had great command, good form and good mechanics – pretty electric stuff with that fastball, because it moved, and then you mix that in with the curveball and the changeup. It just worked for him. He was a really good pitcher.”

In announcing the 1979 All-County team, the Napa Valley Register reported: “Haubursin, a junior left-hander, was at times incredible as batters could not solve his good velocity fastball and sharp curve, all from a smooth windup that deceives a hitter.”

He beat Woodside Priory-Portola Valley in the opener of the CIF North Coast Section Class A championships, 5-0, as he threw a two-hitter and struck out 18 at Doyle Park in Santa Rosa.

Haubursin, a 1980 graduate, pulled a muscle in his back during warmups prior to the title game and could only pitch two innings in a 3-2 loss to Lower Lake. He allowed two runs and one hit.

Haubursin pitched a no-hitter as a senior, shutting out John Swett-Crockett, 3-0, in a nonleague game. He faced the minimum of 21 batters, striking out 17 and walked three. It was his first appearance as a starter during the season.

“One of the things that I have told people, is that it was very apparent to me, even playing with him, that he knew and understood pitching at a very early age,” said Scott Haubursin, a 1981 Calistoga High graduate, who played on teams with his brother. “I was very lucky to not only play with him, but just watch him pitch. He just loved to compete. He respected the game.”

There was no ego, no arrogance, no attitude to Tim Haubursin, according to Wycoff. He was a “true team guy,” she said.

“I always just saw him excited and wanting to get in and wanting to start the game and wanting to be in there pitching and winning the game for the team,” said Wycoff, a 1979 Calistoga High graduate. “I feel like he was at home when he was pitching a game and he just felt comfortable doing that. He took it on his shoulders to make sure that he did well for the team. He didn’t want to let any of his guys down.

“It just was something that was in his heart his whole life.”

It was a family affair for the Haubursins, as Scott and Tim were teammates at Calistoga High for two seasons.

Wycoff’s husband, Jim Wycoff, a 1977 graduate, was an assistant coach at the time.

Picking up the game at a young age

Scott Haubursin gives credit to Lenny Lyons, a Babe Ruth League coach in the Mill Valley area of Marin County, for teaching Tim the game at an early age.

Lyons taught Tim Haubursin how to pitch, how to hit, how to prepare.

Duby, who led Calistoga to the NCS title in 1977, remembered how talented Tim Haubursin already was when he transferred from Tamalpais High-Mill Valley to Calistoga.

“He came to me mechanically really sound, even as a sophomore,” said Duby, a resident of Shingle Springs (El Dorado County). “What I worked with him on was the mental part of the game.”

“He loved to play the game,” said Scott Haubursin. “He could hit. He just knew how to pitch. He had such an understanding of how to play the game. It was fascinating to watch.”

Tim Haubursin was a three-sport athlete during his days for Calistoga, as he also ran cross country and played basketball.

Going off to college

He transferred to Cal Poly-San Luis Obispo and after redshirting in 1982, was a pitcher for the Mustangs for two seasons, 1983-84.

He did not play as a senior.

Duby is proud of Tim Haubursin’s work as a coach, the way he worked and helped so many players over the years.

“He spent a lot of years working with young guys and impacting them,” said Duby. “It’s real obvious to me, in a real positive way, he took whatever knowledge he had from a myriad of coaches and he took that and imparted that to guys. They bought into his approach. It sounds like he was really appreciated and revered by his players – I’m proud of that.

“I’m proud of the fact that he took things that he learned in Calistoga and other places and he imparted that knowledge on.”

Tim Haubursin worked with players of all ages, from Little League to high school, college and pro.

“The kids just loved him because he would talk to them and really get their mind around what they were trying to do and to understand pitching. He just loved to pass on the knowledge, of how to pitch and how to play the game and how to respect the game.

“He was so giving of his time to help anybody who wanted to be better at the game – that was truly one of his gifts for sure.”

In a story on the California Community College Athletic Association website, www.cccaasports.org, Santa Barbara City College head coach Jeff Walker said: “It’s a huge loss for Santa Barbara baseball and the entire baseball community. He’ll be sorely missed. He was well-loved and taught everybody from Little Leaguers to major leaguers. He was well-respected in the baseball community and everyone on our team loved him.”

Santa Barbara CC Athletic Director Rocco Constantino said: “I was really shocked to hear about Tim’s passing and want to express my sincere condolences to his family, friends, colleagues and the players he coached. Tim was so passionate about pitching instruction and I was impressed with how well he worked with our students. He had such attention to detail when it came to pitching instruction and he did everything he could to help each one of our pitchers become better.”

Thomas took advantage of a surprising soft and gentle Thursday morning with a 5-under 65, the lowest score in six U.S. Opens on this tough Tillinghast design.

PGA Tour: Cink in contention with son on his bag

Stewart Cink, with his son caddying, was tied with five others for fifth at 14 under, one stroke off the lead, when the Safeway Open leaders finished their third rounds at Silverado Resort and Spa in Napa on Saturday.

After a tumultuous 1-7 season, Calistoga High football started winning when alumnus Mike Ervin took over as head coach in 2006.

Morris: Harry Higgs is your next favorite golfer

Register sports writer Gus Morris discusses one of the rising stars of the PGA Tour, Harry Higgs, who finished second in the Safeway Open on Sunday.

Game 7 awaits the Nuggets and Los Angeles Clippers on Tuesday night, with the winner headed to the West title series against the Los Angeles Lakers.

Morris: Harry Higgs is your next favorite golfer

Register sports writer Gus Morris discusses one of the rising stars of the PGA Tour, Harry Higgs, who finished second in the Safeway Open on Sunday.

Tim Haubursin, shown during his coaching days at Arizona Christian University, was one of the best pitchers in Calistoga High baseball history. He passed away on March 31 at the age of 58.

Tim Haubursin graduated from Calistoga High in 1980 after transferring from Tamalpais High in Mill Valley. He went on to play baseball at Sonoma State Universtiy and Cal Poly-San Luis Obispo before getting into coaching.

After graduating from Calistoga High in 1980, Haubursin played one season at Sonoma State before transferring to Cal Poly-SLO, where he played until 1985.