Gamon Howard, at the table wearing a UNLV cap, poses with family members during Wednesday's signing ceremony in the American Canyon High theater. 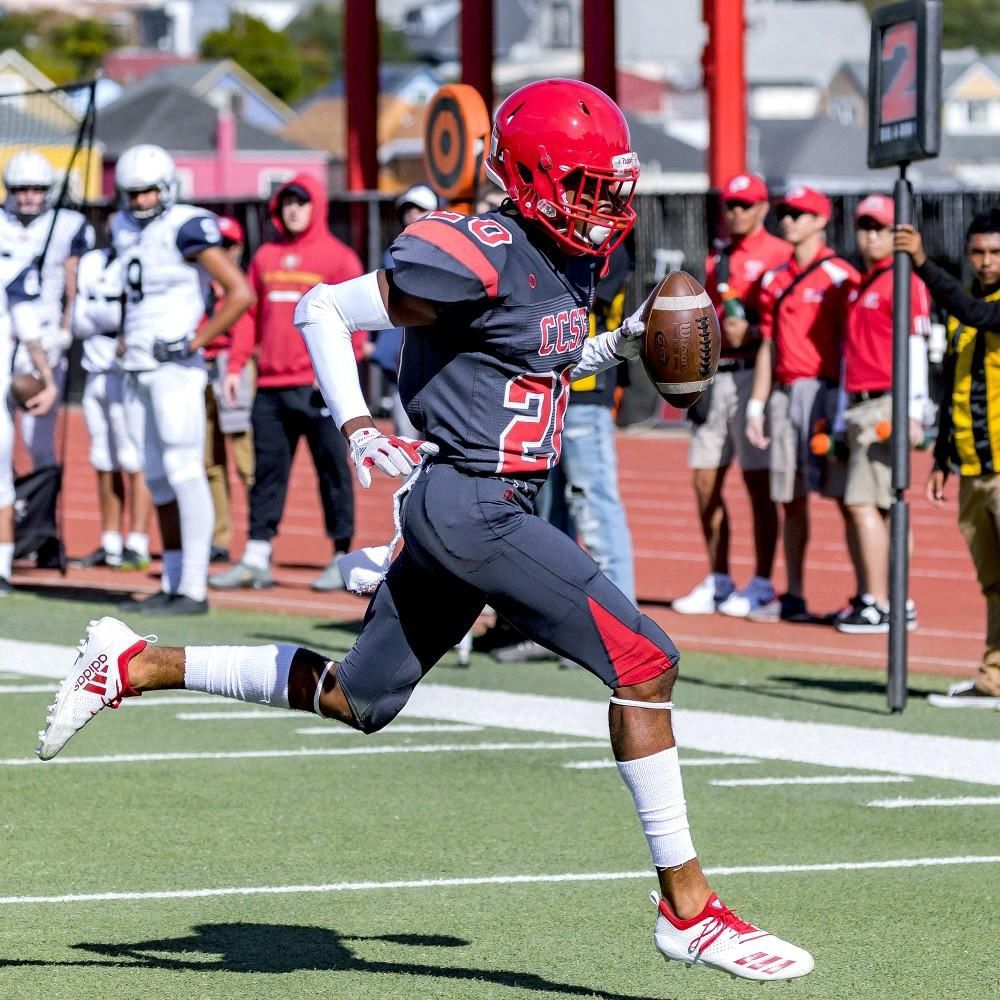 Gamon Howard returns one of the five interceptions he had for City College of San Francisco this past fall for a 25-yard touchdown. 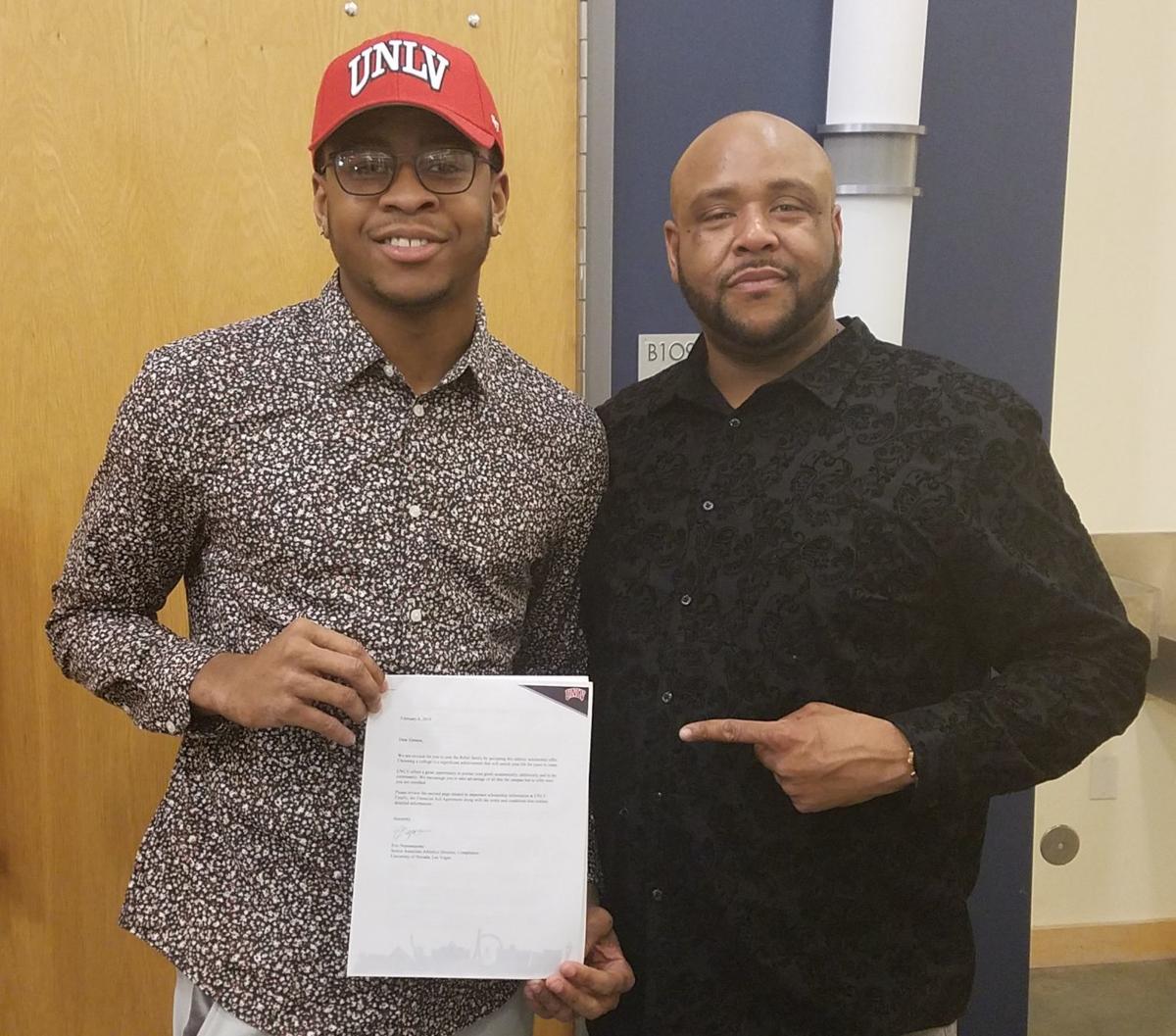 Gamon Howard Jr., left, poses with his father, Gamon Howard Sr., and his national letter of intent to play football for UNLV.

Before Gamon Howard could play Division I football, he had to play the game of life.

But with his classroom stats, GPA below 2.5 and 960 SAT score, he wasn’t going to play anywhere but community college for a while.

“I was a knucklehead in high school,” said Howard, who was a much bigger star at ACHS in basketball, and in track and field also qualified for the 2017 Masters Meet in the high jump. “I wasn’t really focused on school, just a guy playing sports. So I had to man up and get my priorities straight and get my grades right so I could continue to play football.”

He still needed to get away, from the bad influences that kept him from studying. So he disappeared to Southern California, and attended and played football for Golden West College in Huntington Beach.

“I was secluded from my friends, stuff like that, pretty much on my own, so that helped a lot,” he said.

He finished sixth for the Rustlers with 26 tackles (17 solos, nine assists) and had two interceptions as they finished second to Saddleback in the National Southern Conference with a 3-2 record and went 5-5 overall.

Howard’s GPA began to improve. But it still wasn’t the right situation for him.

“It was too expensive down there, living on my own,” he said of why he transferred to City College of San Francisco before this school year. “It was a better situation to come back (to the Bay Area).

“What helped me (at CCSF) was the coaching and competition level, practicing with the best guys around, and getting in the right classes. City is a good school. I applaud City.”

At CCSF, which finished third in the Bay 6 Conference at 3-2 and was 7-4 overall, he was again sixth in tackles, with 43 tackles (30 solos and 13 assists), but led the Rams with five interceptions and had three tackles for losses. He returned two interceptions for touchdowns, including a clutch 91-yarder in the conference title game against San Mateo that capped the scoring in a 32-29 loss.

He was asked if he tried to dunk the football over the goalpost crossbar to celebrate.

“No, I had to take a knee,” he said. “It was such a surreal moment, all I could do was take a knee and thank God. It was crazy.”

With his GPA now about 3.5, he received 10 offers, including Boise State, Montana, UTEP and Liberty. Only one was from in state, San Diego State. Even closer, though, was the University of Nevada-Las Vegas. He visited the campus last weekend with his dad, Gamon Howard Sr., and lifelong friend Jamorie Brooks, a cornerback who graduated from JSerra Catholic High in San Juan Capistrano last year and redshirted at Oakland’s Laney College this fall.

With a good opportunity to start for the Rebels, the 6-foot-3, 200-pound Howard decided on UNLV.

“I loved everything about it,” Howard said of UNLV. “They’re turning the whole program around. In 2020 we’ll be sharing the new stadium with the Raiders and play the first game there against Cal.”

American Canyon High hosted an emotional signing ceremony for Howard on Wednesday night in the school theater, where his father, Gamon Sr., and grandmother, Bernadette Howard, stole the show with stories about their “baby” and his path back to stardom.

The Rebels have yet to post a winning record in four seasons under head coach Tony Sanchez, going a combined 16-32. But Sanchez, who previously coached at nearby high school power Bishop Gorman, told the Las Vegas Sun that he was pleased Howard verbally committed during his visit.

“It’s good getting a guy like that,” the coach told the newspaper. “If he had been an early-enrollee guy, he would have been hard to pick up. He would have had a lot of schools circling their wagons around him.”

At the signing ceremony, Athletic Director Nate Wilkens said the campus was proud to see yet another football standout sign with a NCAA Division I program, after Chris Seisay went to Oregon and Jomon Dotson to Washington.

“Being a first-year AD, it certainly wouldn’t be appropriate (for me) to speak to Mr. Howard’s accomplishments here, but … he left such an impression here,” Wilkens said. “I was contacted by so many administrators and staff here that remember Gamon and the impact he had on the campus. He really did leave a mark, not just on the football field – he was a very well-respected individual here and we’re certainly proud of his accomplishments and that he’s going to UNLV.”

Howard, who in basketball at ACHS was the 2016-17 Napa County Player of the Year and a three-time All-Solano County Athletic Conference First Team selection, said some friends still think he’s been playing college basketball. That he’s going to UNLV, which was the 1990 national champion in men’s basketball and is still the country’s third winningest Division I program in that sport, hasn’t convinced those people any more that he’s now a football star.

In his own speech at the ceremony, the soft-spoken Howard said he was surprised by how many were in attendance.

“Being from Vallejo, California, it’s hard, even just to make it out, and I want to thank my dad for even putting me in the position I am in today, moving me to American Canyon High School,” he said. “It’s been a long journey. I’m speechless. I’ve worked so hard for this.”

Howard Sr., who owns a barber shop in Vallejo, said he had been crying tears of joy all day and was still trying to compose himself as he addressed the family members, friends, coaches and faculty in attendance.

“I work hard, but he worked twice as hard as I did. This is one of the greatest things in my life, my life’s work, right here,” he said, looking at his son. “Without my mother’s prayers, and yours, I don’t even think we’d be here right now.”

“Some days I was mad at ya’ll, and I didn’t hold my tongue, but I wanted to make him a better person. So I thank you guys for staying on his butt, making sure he was motivated, working him hard when he wasn’t right, not letting him play when I thought he was supposed to play.”

He also said the grandmother of Bethel graduate CJ Anderson, who played for the Los Angeles Rams in the Super Bowl last Sunday, also called to wish his son well.

“It blew my mind that she remembered him,” he said.

Howard’s paternal grandmother, Bernadine Howard, talked about she helped raise her grandson, nobody knows him like she does, and that she insisted he finish college.

“Told him, ‘You can do the four years and after that you can do what you want to do. But you owe me four years.’ I remind him every time I see him,” she said. “I’m so proud of him.”

Brooks, who grew up with Howard, just like Howard’s father grew up with his dad, isn’t surprised Howard chose football over basketball in college.

“He’s an athlete and I feel he can do anything he puts his mind to,” Brooks said.

Howard said after the ceremony that while his dad helps him get on track academically, he wanted it for himself, too.

“I wanted to be successful, so I had to make those changes and make sacrifices,” he said. “Time management was the big thing. I had to stop hanging out with friends so much and do my homework.

“It feels great because this is what I’ve worked so hard for, just to have this signing day. What made me want to work hard was to have the mindset to be successful. If I’m going to do it, I’ve got to do it 100 percent, so that’s what I decided to do.”

“People ask me that all the time,” he said, “but I didn’t get any offers in basketball, and I did in football. So I thought, ‘I must be better at football if I’m getting offers for it,’ and it worked out. But when I tell people I’m going to UNLV, people still think it’s for basketball. I like to hoop a little bit just to work out, keep my endurance and stamina up. And a lot of basketball skills help me with football, like my footwork.”

He plans to major in business and management, and follow in his father’s footsteps.

But that’s where the similarities end.

Gamon Howard, at the table wearing a UNLV cap, poses with family members during Wednesday's signing ceremony in the American Canyon High theater.

Gamon Howard returns one of the five interceptions he had for City College of San Francisco this past fall for a 25-yard touchdown.

Gamon Howard Jr., left, poses with his father, Gamon Howard Sr., and his national letter of intent to play football for UNLV.