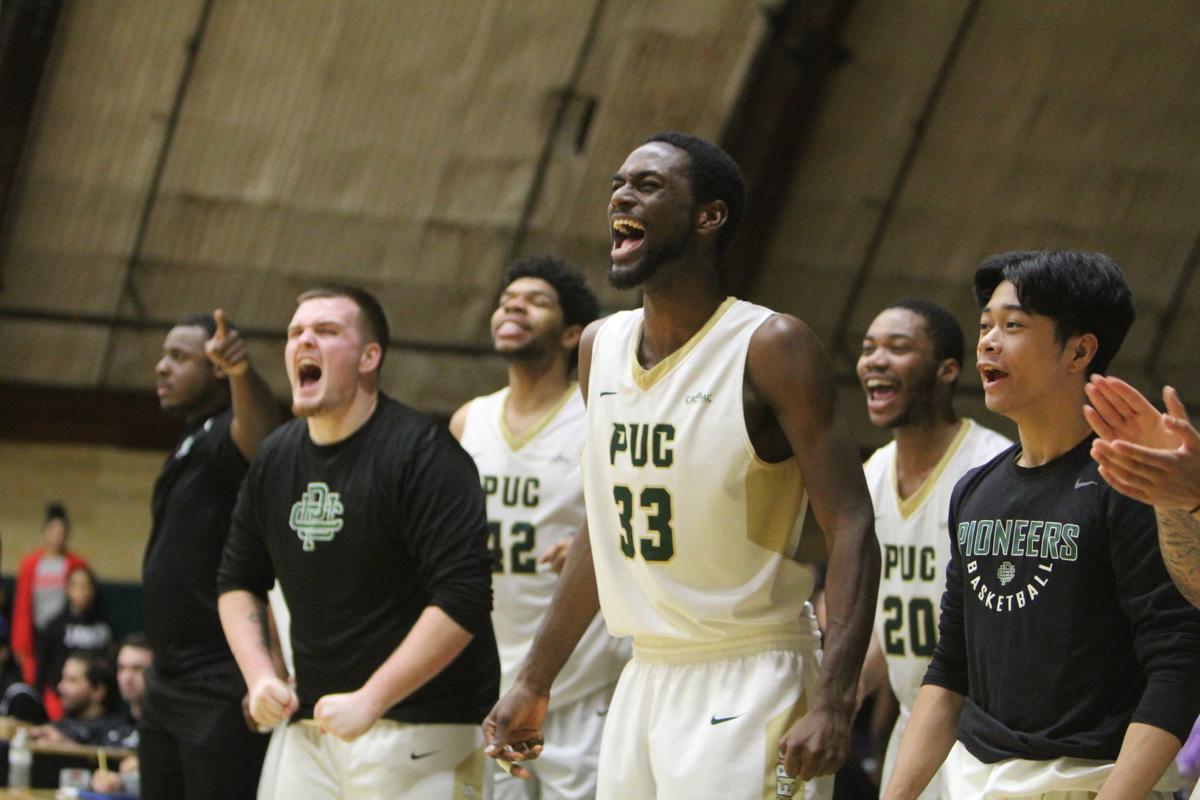 Pacific Union College's Tim Ford (33) cheers on his teammates during a game against the University of Antelope Valley last season. Ford rebounded from a disappointing junior campaign with an all-league season as a senior. 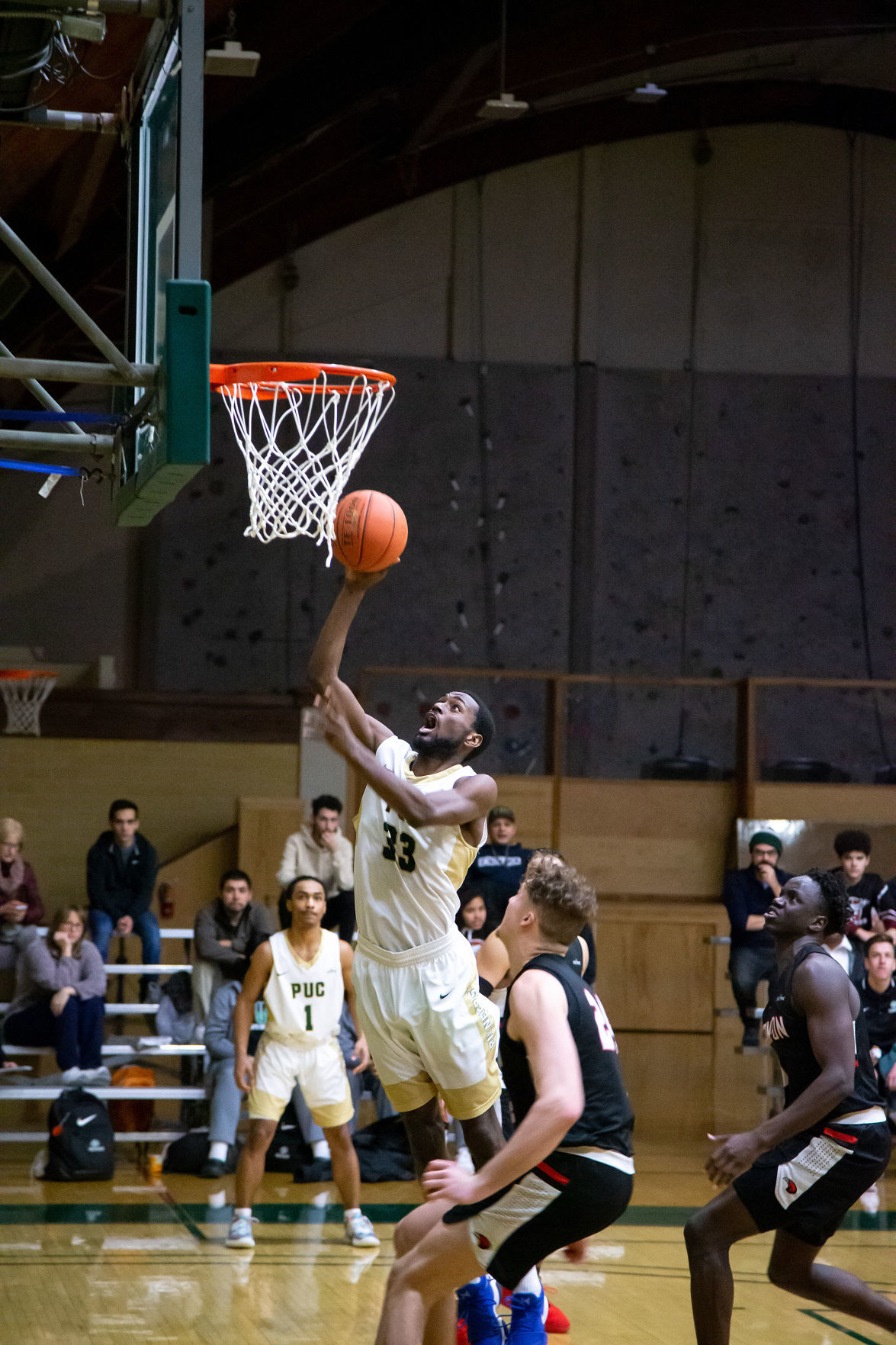 Tim Ford averaged 11.2 points and a team-best 8.3 rebounds per game this season and also compiled 10 double-doubles, tied for the single-season school record. 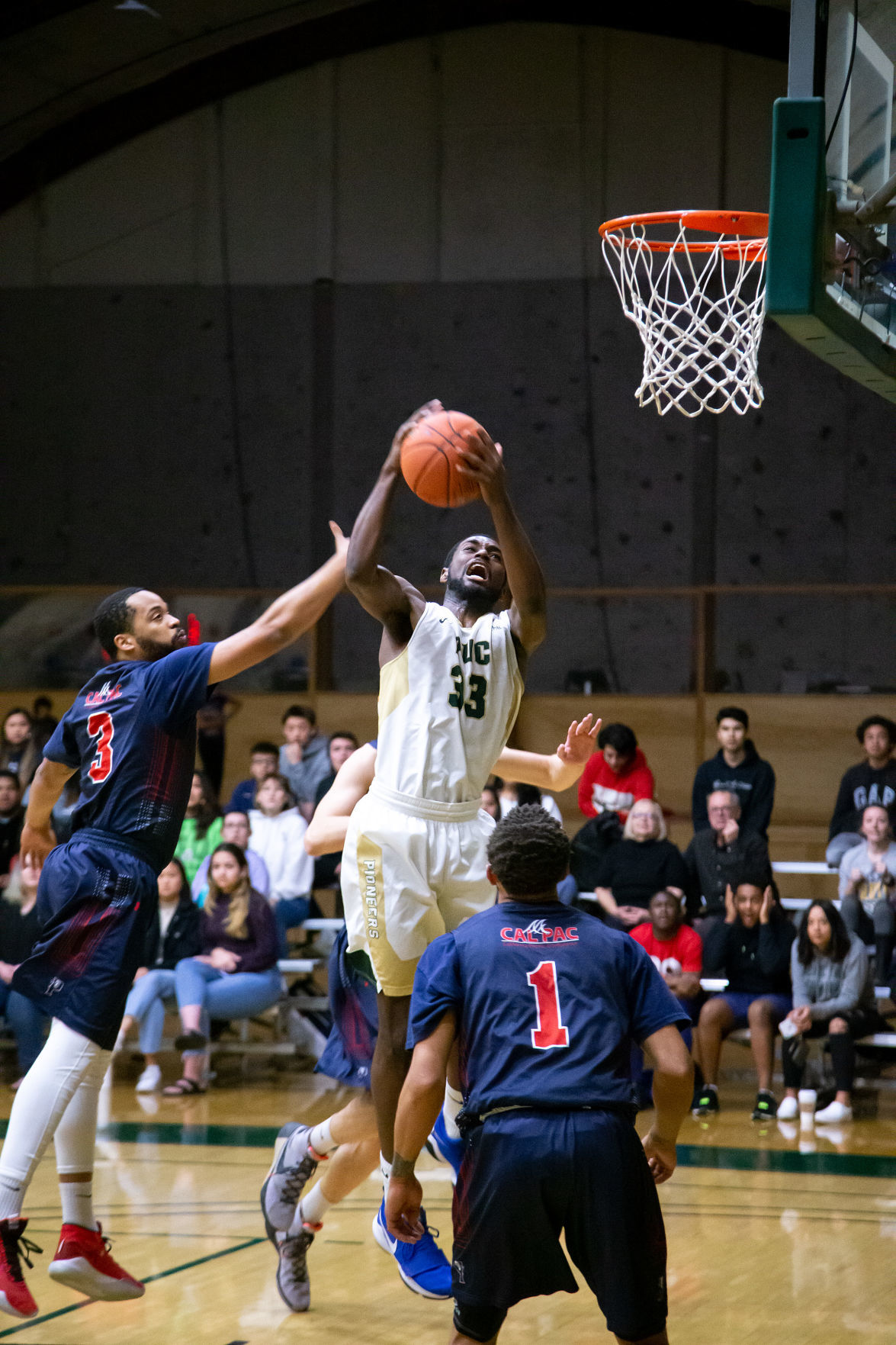 Ford fights for a rebound during a late-season CalPac game at Pacific Union College.

Entering his senior year at Pacific Union College, Tim Ford knew one thing for certain: he had to get his mind right.

His junior season as a member of the Pioneers’ men’s basketball team – his third team in five years – had been a disappointment. His confidence, at one point one of his greatest strengths, was being overtaken by self-doubt.

Ford had started to let the little voices in his head win. Every athlete hears them at some point, those whispers telling them they aren’t strong enough, tall enough, skilled enough.

“I let other people’s opinion get to me and it affected my game and I saw that,” he said recently. “It felt like there was no return and I kind of let myself sink.”

But as he stared down his final year of college basketball last summer, Ford put his efforts into changing his outlook – his “mentals,” as he calls it.

“They wouldn’t be doubting me if I wasn’t good at something,” he said. “So, I just took that and rolled with it, used it as a chip on my shoulder, let it fuel me to get better.”

From the depths, Ford rose to great heights to put together a senior campaign that etched his named into the PUC record books. The 6-foot-7 forward-center compiled 10 double-doubles, tying him for the single-season school record, as part of a career year that saw him average 11.2 points and a team-high 8.3 rebounds per game. For his efforts, he was also a second-team all-conference selection.

“He will forever be missed and will definitely go down in history – well, officially with the double-double record, but also in my book as one of the better players on and off the court that we’ve had in our program,” said sixth-year head coach Greg Rahn.

Rahn remembered the first time he watched Ford play, on film when Ford was in the middle of difficult season at Chaffey College in Southern California. What stood out most about the tall and lanky forward was his attitude and hustle, the exact traits Rahn looks for in players he recruits.

“He definitely is a guy who wants to win, and his motor, the way he carries himself on the court, he sacrifices a lot and gives every possession everything he has,” Rahn said.

But what Rahn didn’t see on film was the self-doubt and lack of confidence that plagued Ford even then. He had transferred to Chaffey after a successful first year at Allen Hancock College in Santa Maria because his family wanted him closer to home.

At Hancock, Ford felt he had begun to scratch the surface of his potential. In his first year with the Bulldogs, he averaged 6 points and a team-high 9 rebounds in just 14 minutes per game. He played his role well, focusing on crashing the glass and playing tough defense, and his confidence began to grow.

That all changed when he transferred to Chaffey. New school, new teammates, new system, new coach – adjusting and finding a role wasn’t easy, especially since he felt he was leaving a positive situation in Santa Maria. All that affected his frame of mind, and his confidence fell. Whether fueled by doubt or some combination of related factors, Ford’s quality of play also began to drop and he quickly found he had a short leash with his new coaches. That just led him to press more and more in the minutes he was lucky enough to get, which in turn led to more mistakes and less playing time.

“It was almost a negative experience,” Ford said.

In his only year playing at Chaffey, Ford’s minutes, points and rebounds per game all fell. With only two years of eligibility left, he knew if he wanted a chance at playing the game he had fallen in love with as a high school kid at the next level, he needed to make a change. Even though the situation at Chaffey wasn’t great, he said, he never contemplated hanging up his sneakers.

He began looking for new schools to transfer to. Pacific Union College was one of them, but it wasn’t necessarily at the top of Ford’s list. It was far from his family – the hills of the Napa Valley being a different world compared to the sprawling expanse of Los Angeles – and that was a deal-breaker for his parents.

But Ford wanted to make his own choices, take control of his own life, carve out his own path. He and his parents clashed over this. They wanted him to stay close to home, and he wanted to see where basketball could take him.

As these discussions dragged on, the schools that had expressed interest in Ford began to fill their roster spots, leaving him with a shrinking variety of options. Pacific Union was still on the table but he knew that if he was going to have a future in the sport, he had to make a call about what he wanted.

So, he told his parents he loved them but he was packing up and shipping north to Angwin.

“To tell your parents that ‘no matter what you say, I’m doing this’ for the first time as an adult, it was kind of hard,” he said. “It was like, I’m gonna take a chance on myself. It was the first time I did, and I don’t regret nothing.”

It didn’t take long for Ford to fit in at PUC. It’s no secret that NAIA schools are often a landing spot for fringe athletes, players who know that college is likely the last time they’ll suit up in any official capacity.

But there’s a certain passion that you find in NAIA athletes since many know that their playing careers will likely end when college does.

Being in an environment like PUC, Ford was finally around other athletes like himself, players who had been doubted but had risen above those challenges in pursuit of playing the sport they loved. He felt a connection from the moment he stepped on campus.

“They saw something in me that I didn’t as much in the beginning,” he said. “I came here with a clear head, ready to go, but they just saw more of me than I did. I figured I can’t have them caring more than I do. My confidence has just rose being here and I can do nothing but thank my team, thank the conference, thank my coach … I’m just blessed to be at where I’m at, honestly.”

Since making the choice to pursue his passion in Angwin, Ford said his family has come to accept his decision. His parents have even made the long haul up to watch him play.

While his first season wasn’t up to his standards – he averaged 5.8 points and 4.6 rebounds in 14.4 minutes per game – Ford took his first offseason away from home to work on himself, both physically and mentally.

He came back to campus in the fall an improved player, with a better mindset, and the results soon followed. Ford was so locked in during the year that he didn’t even realize he was on pace to break the double-double record, which was actually held by assistant coach Jordan Greenwell, until late in the season.

Ford actually ended up getting his 10th double-double in the Pioneers’ final game of the season.

He couldn’t really believe he was on pace for the record when he first found out, since he had never been a potent scorer. On every team he had been on, he had played his role and not much else. But as a member of the Pioneers, Rahn said, Ford became one of their most important players. Rahn would even burn timeouts instead of subbing Ford out when he was tired because he “couldn’t afford” to not have him on the court.

Rahn pointed to a game against Simpson late this past season when Ford played only seven minutes due to foul trouble. The Pioneers ended up losing that game 80-72, one of several late-season losses that kept PUC out of the conference playoffs for another year.

“That game right there kind of shows his impact,” Rahn said, “because without him, we really struggled.”

Ford’s growth and development as a player over his two seasons with the Pioneers gives Rahn confidence he can continue to improve as he looks to continue his career professionally. Ford said he’s looking at playing overseas or potentially trying to earn himself a spot on a team in the Drew League, a highly-competitive organized league that features amateur and professional players alike.

“He’s just looking for an opportunity,” Rahn said. “He wants to continue to play. He’s really not ready to give it up yet, which a lot of college seniors aren’t. They want to continue to see what their options are, but I think he can really do it.”

With a surge of newfound confidence, Ford believes he can, too.

“I’ve had fun. I moved around a lot. It was a lot between personal life and academics, but I learned a lot and I’ve gained and lost so much from the entire experience and I wouldn’t trade it for the entire world,” he said. “I love who I’ve become as person and I love all the people that I’ve met, how I’ve developed, all of it. It’s been a time and I wouldn’t trade it.”

The Pacific Association of Professional Baseball Clubs, which includes the Napa Silverados, said Thursday it has postponed the season.

Pacific Union College's Tim Ford (33) cheers on his teammates during a game against the University of Antelope Valley last season. Ford rebounded from a disappointing junior campaign with an all-league season as a senior.

Tim Ford averaged 11.2 points and a team-best 8.3 rebounds per game this season and also compiled 10 double-doubles, tied for the single-season school record.

Ford fights for a rebound during a late-season CalPac game at Pacific Union College.