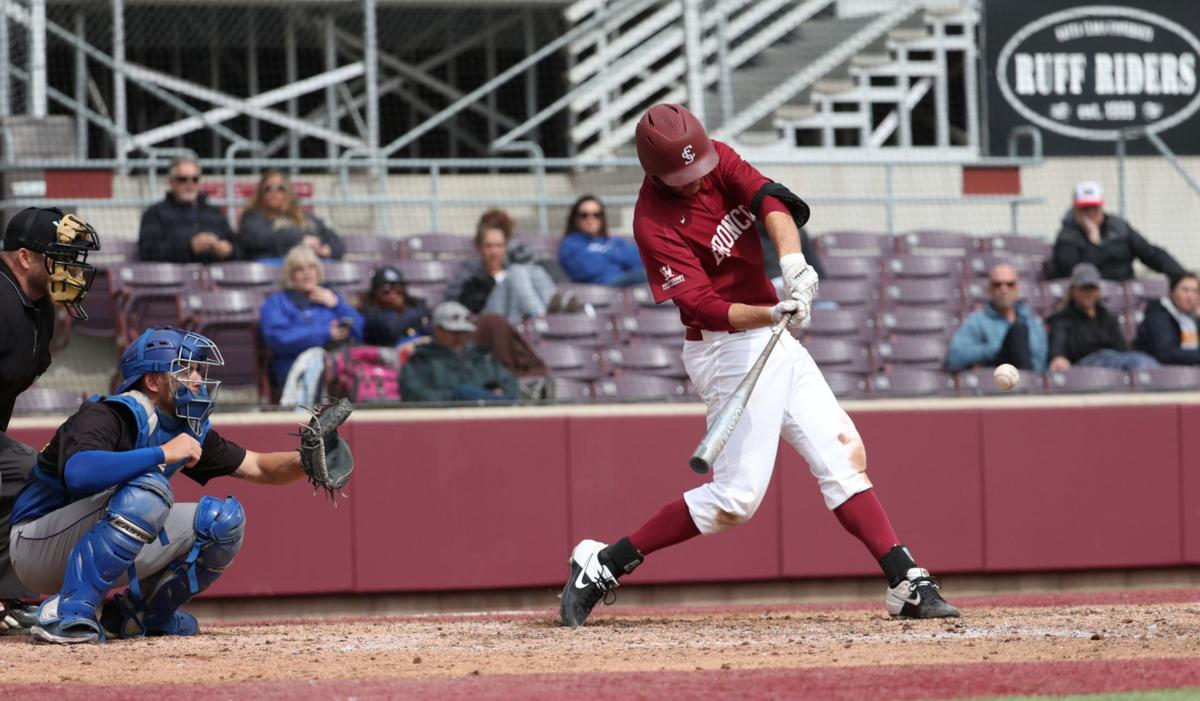 Vintage High alumnus Jake MacNichols swings at a pitch while batting for Santa Clara University during his senior season this spring. 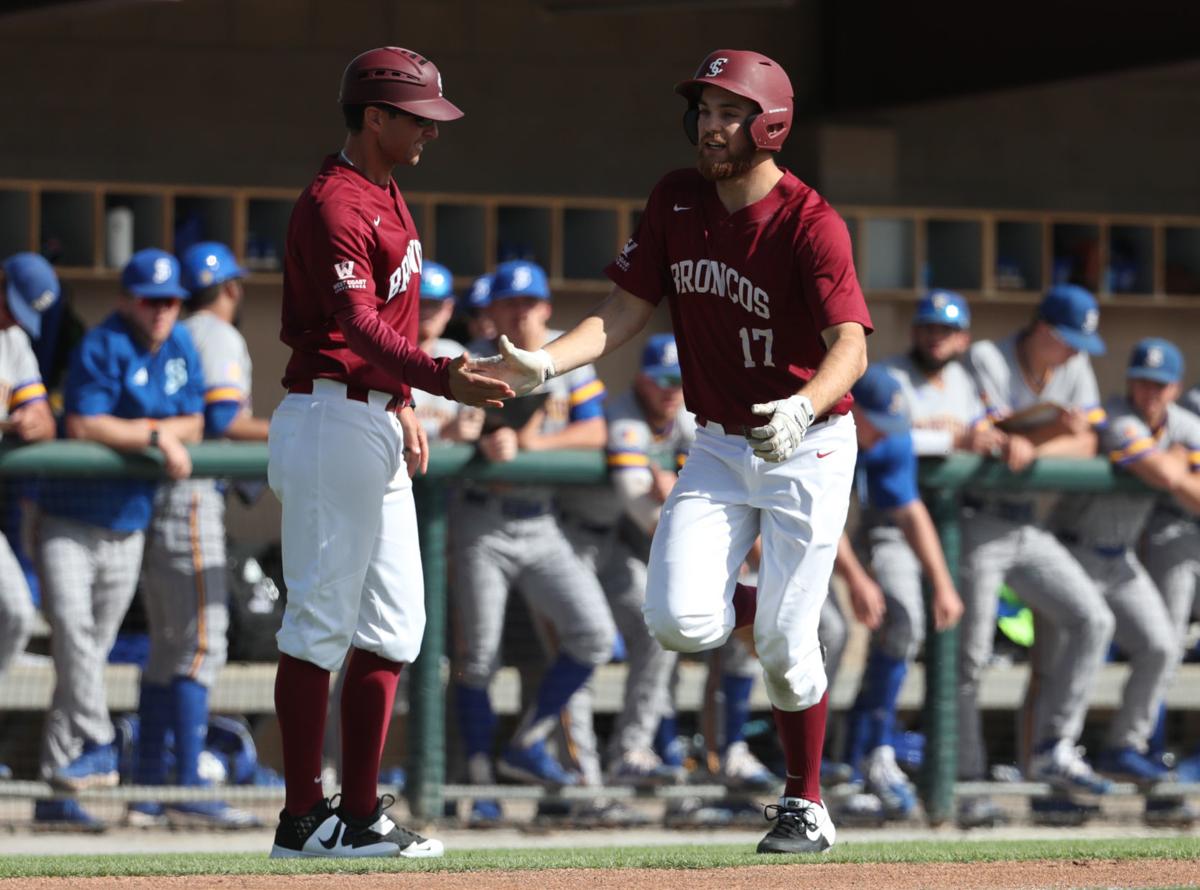 Jake MacNichols is congratulated by assistant coach Jon Karcich after hitting a home run for Santa Clara University during his senior season this spring. 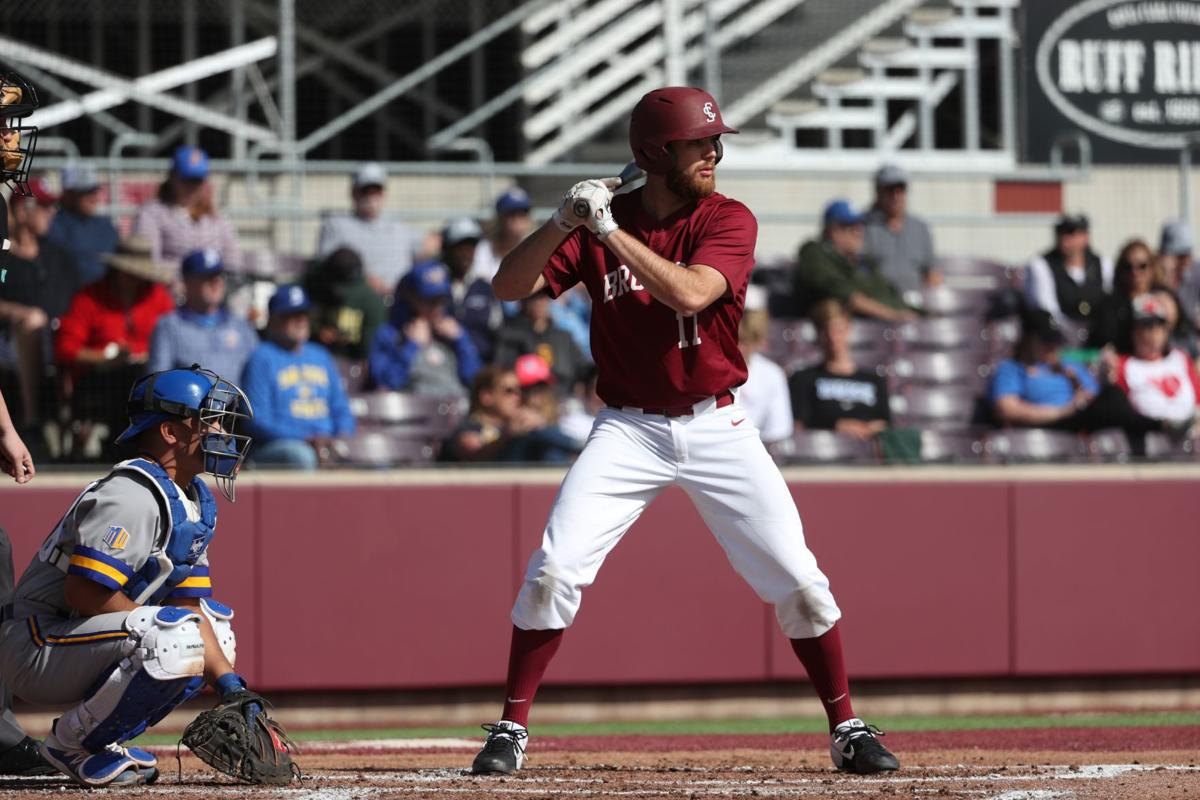 Jake MacNichols joined the Santa Clara University baseball program in the fall of 2016 as a catcher with outstanding skills — not only behind the plate as a top-flight receiver, but also as a power hitter.

His game over the last four years has evolved greatly, to the point where he can play first base and left field and also be used as the designated hitter.

On top of that, he’s become a team leader for the Broncos, an experienced player who is counted on for his all-around talent, versatility and knowledge of the game.

“He’s come a long way,” Santa Clara head coach Rusty Filter said in a telephone interview. “When I first came to Santa Clara (in 2017), Jake had been in the program and was a catcher by trade. I think everybody knew that he had lots of power. We’ve just really tried to upgrade his athleticism. He’s now become a corner-type player, that can catch and play first, and one of the corner outfield positions. We’ve worked really hard on that, to make him a multi-dimensional player, and not stuck in one position.

“We’ve been really pleased with his progression, with that piece of it. He’s a tremendous value to have, with that versatility. It just gives us valuable opportunities to make some switches. He’s in the middle of it at all times.”

MacNichols, a 2016 Vintage High School graduate who is from Napa, was off to a solid start as a senior this past spring.

He played in each of the team’s 17 games, starting eight of those in left field, five as the designated hitter and four at catcher. Prior to the West Coast Conference canceling the remainder of the season on March 12 because of the COVID-19 pandemic, MacNichols was leading the Broncos in home runs (7), RBIs (19) and total bases (40). Batting third or fourth in the lineup, he was second for slugging percentage (.635) and runs scored (16). He also reached base safely in 11 straight games.

He was named as the Rawlings West Coast Conference Player of the Week after hitting four home runs and driving in 11 runs in a four-game sweep of San Jose State to start the 2020 season in February. He established career-highs for hits (3) and RBIs (5) in a nonconference game against San Jose State on Feb. 16.

“He came out of the gate really strong. Usually that’s not the case. Kids usually take some time to heat up, especially with the power,” said Filter. “You don’t see those things early in the season happening very often.

“The thing that we focused on was his contact and to cut down the strikeouts. Jake made a conscious effort to improve those areas of his game. I think he was definitely on pace to have a great season.

“He’s always prepared well. He always comes to the park ready to go, gets in his extra work, and does what he needs to do. We’ve got to find that again next year.”

MacNichols will be returning to Santa Clara as a graduate student in 2021, as he will have one final season of eligibility. The Division I Council on March 30 voted to allow schools to provide spring-sport student-athletes impacted by COVID-19 an additional season of competition and an extension of their period of eligibility, the NCAA reported at www.ncaa.org. The Council also increased the roster limit in baseball for student-athletes impacted by the COVID-19 pandemic, the only spring sport with such a limit, the NCAA reported.

“He’s become a guy that the team can count on and will speak up when needed,” said Filter. “I’m proud of what he’s become. He and I are pretty close and talk quite often. He’s a neat young man. I really enjoy being around him.”

“It would be a cool feat to accomplish,” MacNichols, 22, said. “I want to do it more for my family, because they were all excited about it. I want to try to break it on our home field, so they can enjoy it just as much as my teammates and I can, for sure.”

MacNichols was batting .254 with 16 runs scored through 17 games this year.

MacNichols graduated from Santa Clara, earning a degree in finance. He is looking at pursuing a master’s in marketing next year.

The Broncos were off to a solid start this past spring, with a 12-5 record, when the season was canceled.

“The season, obviously, didn’t end up as we wanted it,” said MacNichols. “When we first heard the news, it really did hurt. We were meshing as a team and we were having success on the field. It was a good start to the season, for sure. I think the biggest thing was that we were just winning games. It was fun to see this new group of guys come together and put it together and figure out how to win.”

He is looking forward to playing next year for Santa Clara.

“We’re ready to finish what we started. And I think this season was the start of it,” he said. “It kind of makes us feel like we have unfinished business with everything going on, everything that happened being 12-5. To get that ripped away from us, makes most of us all that eager to come back. That just shows you kind of how badly people want to stay here and how much they enjoy it.”

As a freshman in 2017, MacNichols played in 42 games, with 30 starts, all at catcher. He batted .156 with six home runs and a .330 slugging percentage. He homered in his first career plate appearance against visiting Washington at Stephen Schott Stadium. The home run came in the bottom of the second inning.

As a sophomore in 2018, he played in 48 games with 45 starts. He finished second on the team with 32 RBIs and was fourth with a .434 slugging percentage. He also had eight home runs.

“I’m so proud of him for graduating and coming back to grad school, just the way he’s carried himself,” said Filter. “He’s done a great job in the classroom. Both on and off the field, he’s really represented us very well.

“It’s amazing, that we as college coaches get this opportunity to watch these kids grow up. I can tell you, without a doubt, he’s made significant strides in that area. When you have one of your best players be a great teammate, it really helps with the culture. I’m so proud of him for that.”

MacNichols said the experience of playing for Santa Clara has benefited him in so many ways.

“As a young player coming in, you just learn so much more about the game from being around older guys,” he said. “Now being one of these older guys, you are just able to see things differently – you’ve been through a lot more, you know how to handle adversity a little bit better. You start understanding what’s valuable for a team to win and you just try to put yourself in that spot.

“It’s learning through experience. Being one of these older guys, you understand everything a little bit more — and not only just in baseball, but in life.”

MacNichols returned to Napa when the season was canceled. He stays in shape by working out and getting in his swings in a batting cage, a routine that he follows each day.

“The main goal is to stay ready and just be prepared for whatever comes next,” he said.

He has a future in the game after completing his college career.

“Jake will get his chance at professional baseball — I have no doubt about that,” said Filter. “You just also want to make sure that the timing is right and the opportunity is right. I have no doubts that Jake will find his path to success, whether it’s in baseball or business or whatever it is that he decides to do.”

MacNichols was named as a finalist for Player of the Year on the Napa Valley Register’s All-Napa County team after a senior season in 2016 in which he batted .310 with three home runs and 16 RBIs. Vintage finished 18-8-1 overall and 13-2 in the Monticello Empire League, winning the MEL title. They lost to Jesuit-Carmichael in the first round of the CIF Sac-Joaquin Section Division I North playoffs, 4-0.

MacNichols played for the Napa Valley Baseball Club, which has an American Legion schedule and is based out of the Veterans Home of California’s Cleve Borman Field in Yountville.

He was selected for the Oakland Athletics team representing Northern California at the Area Code Games, and also played with USA Baseball in the National Team Identification Series.

Vintage High alumnus Jake MacNichols swings at a pitch while batting for Santa Clara University during his senior season this spring.

Jake MacNichols is congratulated by assistant coach Jon Karcich after hitting a home run for Santa Clara University during his senior season this spring. 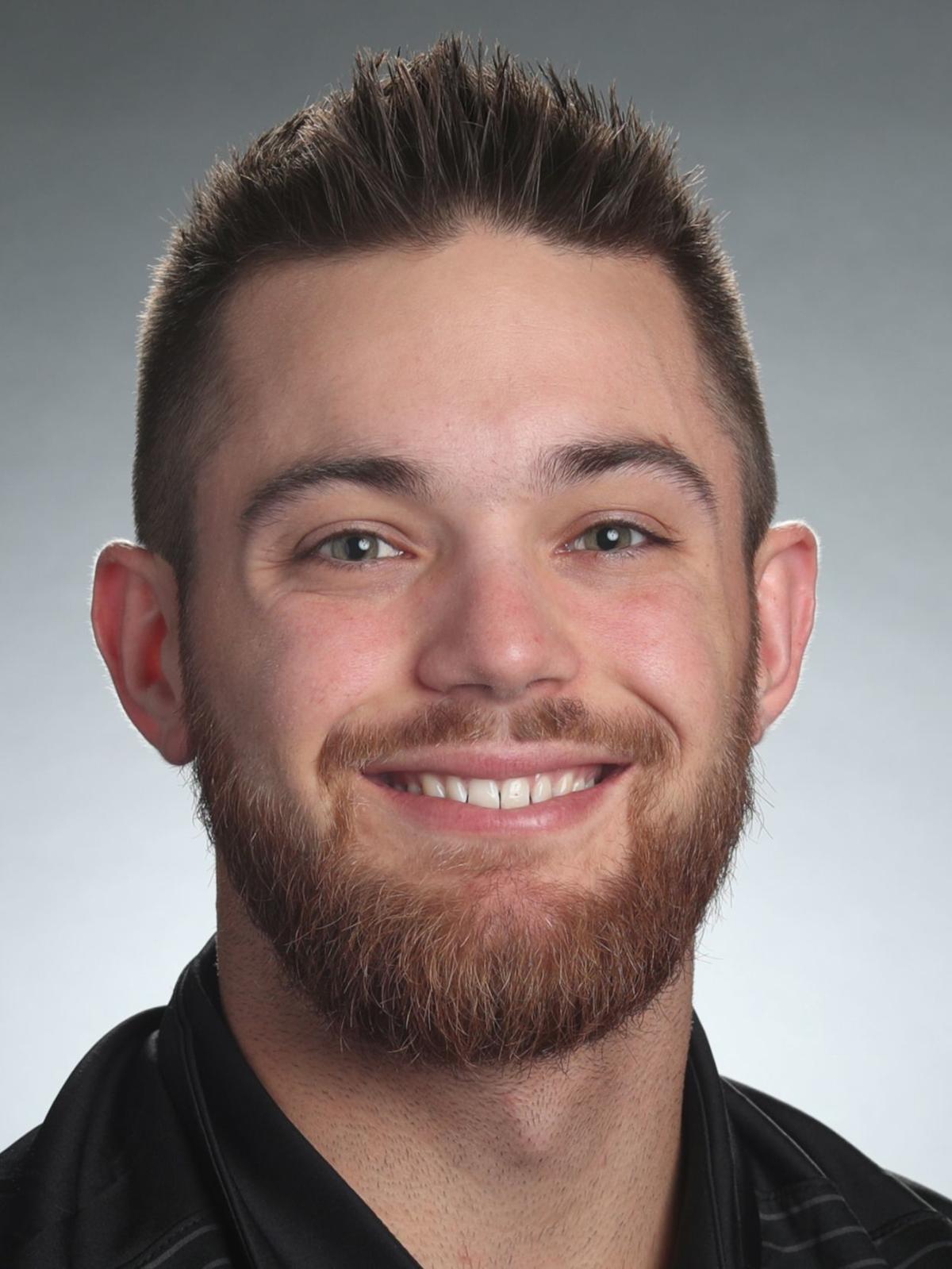