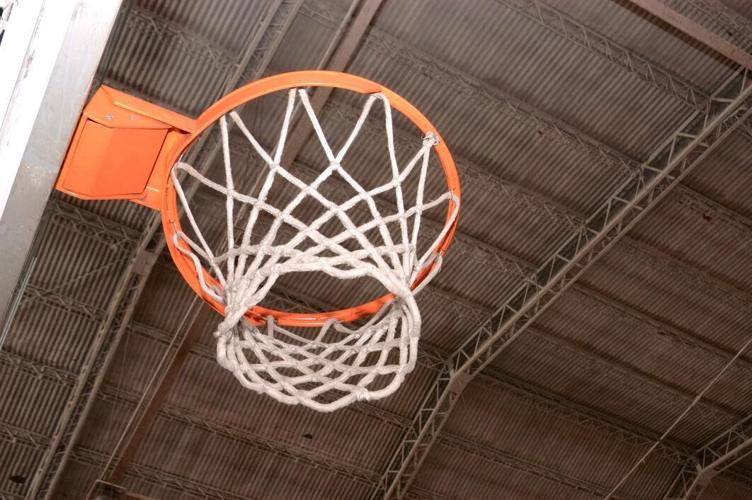 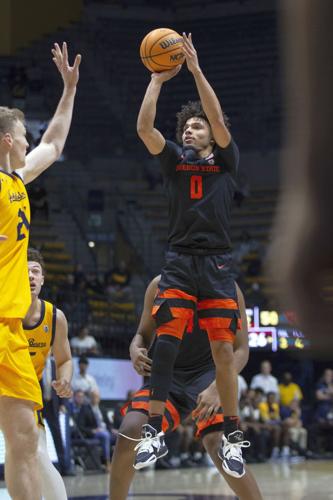 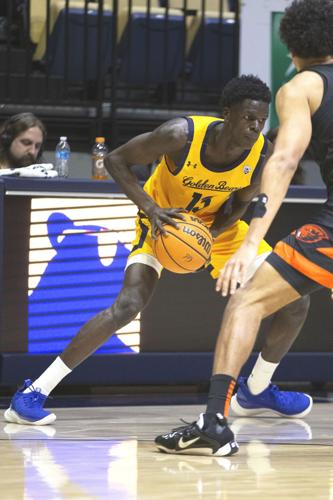 California forward Kuany Kuany, who starred in high school at Prolific Prep of Napa Christian, looks to pass around Oregon State forward Michael Rataj during the first half Sunday in Berkeley.

STANFORD — Hannah Jump scored 21 points, Haley Jones added 11 and a season-high 18 rebounds and fourth-ranked Stanford beat No. 24 Colorado 62-49 on Sunday to claim sole possession of first place in the Pac-12.

“I’m playing with confidence,” Jump said. “I think I have the confidence of all my teammates and my coaches so every time I shoot, I know that’s what they want me to do.”

Cameron Brink scored 14 points for her 13th straight game in double-figures. She also had six of the Cardinal’s season-high 14 blocks. Brink reached 72 blocks for the season, swatting at least one shot in every game.

“I think our defense was spot-on,” Stanford head coach Tara VanDerveer said. “To hold them to 49 points, and one quarter they scored seven and (another) they scored eight, that’s great defense. Now do we want to score more? Yes we do. And do we want to move the ball better? Yes we do.”

“We were really good defensively,” Colorado head coach JR Payne said. “We just couldn’t score the ball. It’s hard to score against them. We’ve got to be able to find a way to get cleaner looks consistently.”

The Cardinal gained a major advantage at the free-throw line, making 17 of 22 attempts compared to the Buffaloes’ 6-of-16 rate.

Stanford won its 19th straight home conference game and held its 22nd consecutive Pac-12 opponent under 70 points. The Cardinal have not allowed more than 77 points since the 2019-20 season.

The Buffaloes entered the game winning six of their first seven Pac-12 contests, marking their best conference start since the 2003-04 season. Their 15-3 overall record matched their best 18-game start since 2012-13. Despite the loss, Colorado has won seven of its last eight games, including two victories over top-15 opponents.

Stanford freshman G Indya Nivar moved into the starting lineup in place of the injured Talana Lepolo, who suffered a left ankle injury Friday against Utah. Nivar had two points and an assist in 17 minutes. Stanford leads the all-time series vs. Colorado 26-5, including a perfect 14-0 mark at home. The Cardinal has outrebounded every opponent this season.

BERKELEY — Alissa Pili and Gianna Kneepkens each scored 20 points to lead the No. 8 Utes to the road on the road Sunday.

“I think it was a must-win for us to stay in the hunt for (the) championship,” Utes head coach Lynne Roberts said. “Cal has been so close in so many games. I was nervous coming into this one, just how we would respond after such an emotional loss at Stanford where we played hard.”

The Utes jumped out to a 10-point lead at halftime and rode a big third quarter to the win, outscoring the Golden Bears 30-19 on 65% shooting from the field.

“We played a much more complete second half,” Roberts said. “Especially in that third quarter. I think we just kind of had the knockout punch there.”

Utah was able to capitalize on its opponent’s mistakes with 23 points off Cal turnovers. The Utes also held a 41-27 advantage on the boards, scoring 16 second-chance points off 10 offensive rebounds.

“We struggled to guard and struggled to keep them off the glass, particularly in the second half,” Cal head coach Charmin Smith said.

Jayda Curry had 15 points and eight assists for California (10-9, 1-7), extending her streak of 41 consecutive games with a 3-pointer. Leilani McIntosh added 10 points, and Kemery Martin and Evelien Lutje Schipholt had nine apiece.

The Golden Bears have lost five straight games, four of which have come against ranked opponents. Cal’s difficult schedule continues with No. 23 Oregon’s visit to Haas Pavilion on Friday, though the Ducks have lost three of their last four.

“All these teams, they’re where we want to be, what we’re striving to be,” Smith said. “Sometimes when you lose, it challenges you ... in terms of your character and your work ethic and all of that. I don’t think we have any quitters on this team. I think we’ll stay with it and continue to look for ways to be better.”

Utah, which trails only Stanford in the Pac-12 standings, has a tough week ahead with upcoming games against Southern California — receiving votes in The Associated Press Top 25 poll — and No. 8 UCLA.

“USC is so physical and defensive-minded, so it’s going to be the battle of wills, their defense against our kind of offense,” Roberts said. “But we can defend too. I think we showed that today.”

The Golden Bears are 0-7 against ranked opponents this season. Sunday’s loss clinched their first losing month of the season. The Bears have a 1-5 record in January after going 5-1 in November and 4-3 in December to open the season.

California plays its fourth straight ranked opponent Friday when it hosts No. 23 Oregon.

Stanford (7-12, 2-7 Pac-12) has won back-to-back games following a string of five straight losses that capped a stretch of nine in 11 games.

Will Richardson hit a 3-pointer to open the scoring but Brandon Angel answered with a layup 11 seconds later and Jones followed with a 3 that made it 5-3 with 17:46 left in the first half.

The Cardinal led the rest of the way.

Jermaine Couisnard hit 8-of-8 free throws and led Oregon (11-9, 5-4) with 18 points but made just 4 of 12 from the field and 2 of 9 from behind the arc. Rivaldo Soares added 13 points and Keeshawn Barthelemy scored 11. N'Faly Dante had 15 rebounds, two blocks and a steal to go along with nine points.

Couisnard made two pairs of free throws to pull the Ducks within three points late in the first half but Isa Silva scored in the lane to make it 42-37 at intermission. Michael O'Connell converted a traditional three-point play to open the scoring in the second half and Ingram followed with a 3-pointer to give Stanford an 11-point lead with 18 minutes to play.

Oregon went more than five minutes without a made field goal after Couisnard scored in the paint to make it 59-49 with 7:11 left. The Cardinal scored missed six consecutive shots during that drought but outscored the Ducks 9-2 to take a 17-point lead with 1:54 remaining.

Michael Jones scored 10 points for Stanford, which plays the third of four consecutive home games Wednesday in a non-conference matchup with Chicago State.

California was within 10 points early in the second half before Akanno hit a 3-pointer and Pope added six points on a three-point play and a 3-pointer to give the Beavers a 19-point lead with 15:58 remaining.

Cal scored the next eight points to get back within 39-28 but the Bears missed their next five shots. Meanwhile, the Beavers made five of six in a 13-0 run as Justin Rochelin hit a 3-pointer, Michael Rataj added a 3-pointer and Rochelin connected again from distance to spark the run.

Oregon State's win leaves the Beavers and Golden Bears tied with Stanford for last place in the conference.

Oregon State wrapped up a stretch of six road games in its first nine Pac-12 games this season. The Beavers will play seven of their final 11 regular season games at home. That home stretch begins on Thursday against Utah.

Cal plays next at Stanford on Thursday.

Billy Packer, an Emmy award-winning college basketball broadcaster who covered 34 Final Fours for NBC and CBS, died Thursday. He was 82.

STANFORD — Maxime Raynaud scored 15 points, Harrison Ingram had 14 and Stanford rolled to a 75-46 victory over California on Saturday night fo…

Olivier Nkamhoua scored 27 points and Zakai Zeigler had 22 points and 10 assists to lead No. 4 Tennessee over No. 10 Texas 82-71 on Saturday night in an SEC/Big 12 Challenge. Josiah-Jordan James added 14 and Santiago Vescovi had 12 for Tennessee, which led by as many as 22 midway through the second half. Sir’Jabari Rice scored 21 to lead Texas. Marcus Carr and Brock Cunningham finished with 11 each.

What a refreshing respite this day has been; a much-needed reprieve from covering the new Name, Image and Likeness world of Power 5 football, where we have been trained to believe that the value of a college scholarship means virtually nothing. Don’t you dare spew this nonsense to the recipients of the scholarships awarded by Folds of Honor; educational grants that go to the children and ...

College football recruiting has changed, and ‘it’s getting worse’ for high school prospects

MIAMI — Offensive coordinator Josh Gattis came to the University of Miami from Michigan in February 2022 as the reigning recipient of the Broyles Award that goes to the nation’s top assistant coach in college football. On Friday morning, Miami coach Mario Cristobal announced in a one-sentence news release that Gattis “has been relieved of his duties as offensive coordinator.’’ The firing comes ...

Unless you have been waking up before dawn to watch the Australian Open, or you happen to be a diehard Florida Gators tennis fan, you probably have been missing the emergence of Ben Shelton, one of the most compelling stories in American tennis in a long time. A year ago, Shelton was ranked No. 569 in the world and getting ready for his sophomore season at the University of Florida, where his ...

Olivier-Maxence Prosper is a forward for No. 16 Marquette and he is inching closer to a potential shot at his NBA dream. The 20-year-old Montreal native has also been a lifelong inspiration to his 17-year-old sister, Cassandre, who plays for Notre Dame and wants to someday play in the WNBA. The two siblings have played basketball since they were very young. Both parents played in college.

IOC to allow Russian athletes to compete In 2024 Olympics

This Day in History: First Winter Olympics take place in the French Alps

This Day in History: First Winter Olympics take place in the French Alps

California forward Kuany Kuany, who starred in high school at Prolific Prep of Napa Christian, looks to pass around Oregon State forward Michael Rataj during the first half Sunday in Berkeley.