Napa High's Brock Bowers breaks through traffic on a touchdown run against Casa Grande in Petaluma on Oct. 18. 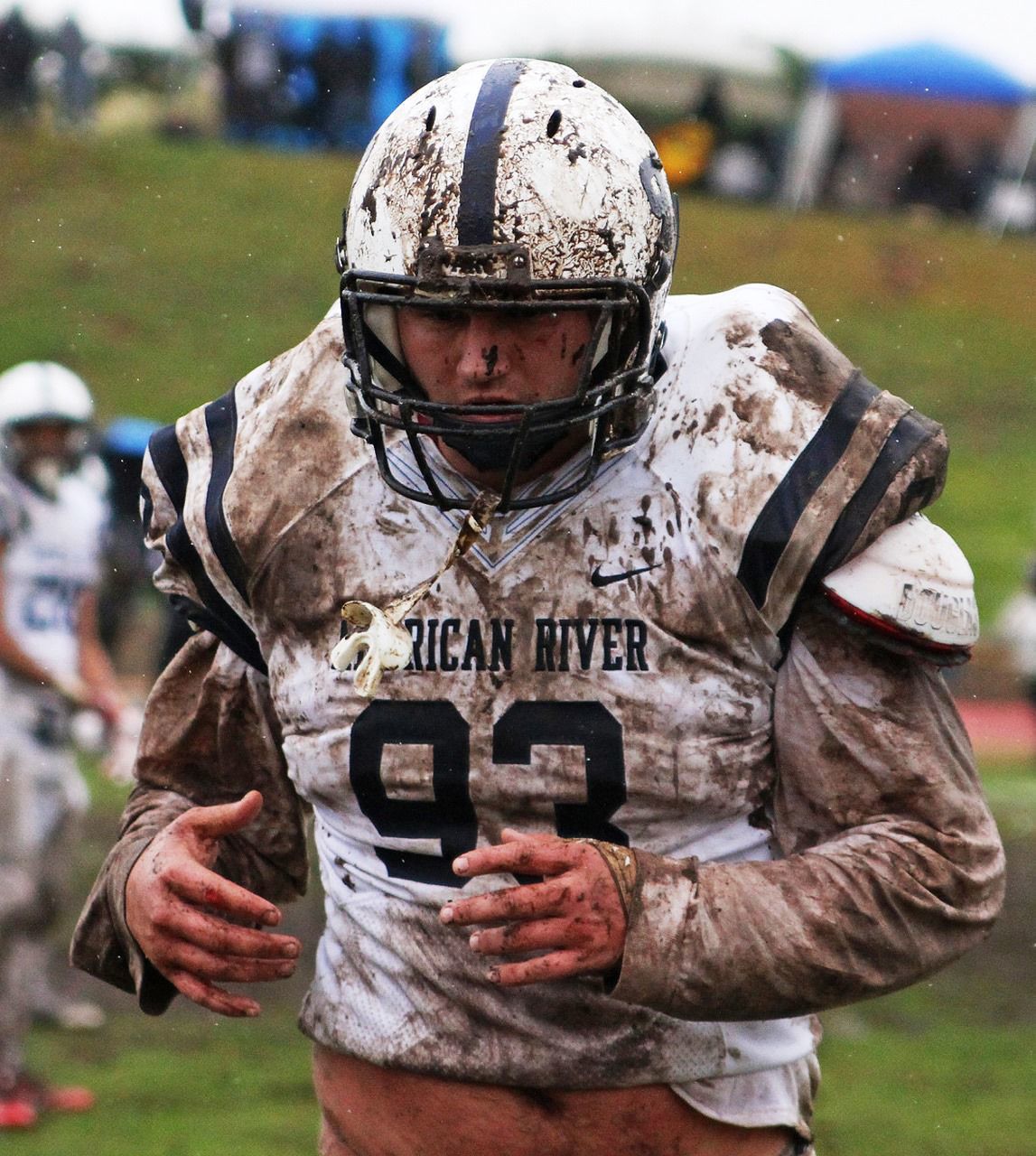 Caleb Tremblay, a 2014 Vintage High graduate, runs off the field while playing for American River College of Carmichael in 2016.

Napa High School junior Brock Bowers, the Player of the Year on the Napa Valley Register’s 2019 All-Napa County football team, is “one of the elite prospects at his position in the 2021 class,” according to a report by 247sports.com on April 5.

Bowers played in nine games for Napa (7-4) last fall, catching 39 passes for 1,098 yards with 14 touchdown receptions. He also ran for 316 yards on 22 attempts and scored three touchdowns for the Grizzlies, who finished second in the Vine Valley Athletic League at 4-2.

Napa lost to Clayton Valley Charter-Concord, 35-9, in the first round of the CIF North Coast Section Division II playoffs.

“Bowers is ranked as the No. 3 tight end nationally in the 2021 class by the industry-generated 247Sports Composite and the No. 11 player in the state of California while ranking as the No. 102 player nationally,” 247sports.com said.

In its scouting report on Bowers, 247Sports.com said: “Boasts elite level athleticism, clocking a 4.5 40 as a sophomore and a 40-inch vertical. Has the speed to burn a linebacker and separate from a defensive back. Tracks the ball well, uses good body control and his hands to make his catches and routinely finds the soft spot in a defense. Plus blocker who can seal off the edge but used best as a pass-catcher.”

Bowers was also honored for his play last fall when he was selected as the Vine Valley Athletic League’s Most Valuable Player. He was named Prep2Prep 2019 North Coast Section Junior of the Year, according to prep2prep.com, and was named to the SportStars’ All-NorCal Football Offense 2019 Roster, as announced by sportstarsmag.com.

“If Brock Bowers has proven anything, he has demonstrated to be a reliable playmaker on the field,” recruitingnewsguru.com reported on April 3.

Tony Trosin is headed to the Sacramento State Football Hall of Fame as a member of the 1988 team, which went 10-3 and reached the NCAA Division II semifinals, statehornet.com reported on April 10.

The Vintage High graduate was the quarterback for the Hornets, head coached by Bob Mattos, whose season ended with a 42-20 loss to North Dakota State.

There are 10 other inductees in the 2020 Hall of Fame class as well. The induction ceremony is Oct. 10 at Harper Alumni Center.

Trosin was the quarterback for the 1983 Vintage team, which finished as the CIF Sac-Joaquin Section Division I runner-up after a 15-12 loss in overtime to Christian Brothers-Sacramento in the title game.

He went on to play for Solano Community College.

Taking over as the starter during Week 5 of the 1988 season, Trosin threw for 1,623 yards with 15 touchdowns and four interceptions for Sac State.

He was in the Canadian Football League for a short time and played two years of pro football in Italy.

He has been an assistant coach in the Folsom High program over the years.

Caleb Tremblay of Napa is going into his senior season as a defensive lineman for USC.

Tremblay, a Vintage High graduate and a transfer from American River College-Sacramento, has appeared in 14 games, with two starts, and has 18 total tackles, including three stops for losses of 21 yards. He also has two sacks for losses of 18 yards.

“Tremblay again should be a key member of the defensive line as a senior in 2020,” USC reported in its spring football prospectus media guide, at usctrojans.com.

Playing in 11 games, “Tremblay was a key contributor on the defensive line, both at tackle and end, as a junior in 2019,” USC reported.

Tremblay was selected first-team All-Monticello Empire League on defense as both a junior and senior at Vintage.

At No. 1, Folsom leads a list of the “Top 20 most dominant high school football programs of the last 10 years from the Sac-Joaquin Section,” according to a report by MaxPreps.com on March 27.

“Section titles were not the only criteria used when determining the decade’s top teams. We also took into account where each team finished in the MaxPreps Sac-Joaquin Section Top 25 rankings. This rewarded teams for playing tough schedules along the way,” MaxPreps said.

Oakdale is No. 3, Oak Ridge-El Dorado Hills and St. Mary’s-Stockton are tied for fourth, Central Catholic-Modesto is No. 6, Granite Bay is No. 7, Elk Grove is No. 8, Manteca is No. 9, and Grant-Sacramento is No. 10.

Napa, Vintage and American Canyon left the Sac-Joaquin Section after the 2017-18 school year and moved into the North Coast Section.

The move took effect for the 2018-19 school year and returned Napa and Vintage to the North Coast Section, where they were members through the 1975-76 school year.

There were issues regarding transportation of NVUSD schools in the SJS, to areas such as Sacramento, Stockton, Modesto and other places, and traffic concerns. Another factor has been declining enrollment in the NVUSD.

* Casey Taylor has left Capital Christian-Sacramento after three seasons and is the new head coach at Inderkum-Sacramento, taking over for Terry Stark, who resigned, The Sacramento Bee reported.

“I really think Inderkum is a gold-mine football program,” Taylor told The Bee.

* Mike Maben is the new head coach at Del Oro, taking over for Jeff Walters, NorCalPreps.com reported. Walters takes over as the athletic director.

Napa High's Brock Bowers breaks through traffic on a touchdown run against Casa Grande in Petaluma on Oct. 18.

Caleb Tremblay, a 2014 Vintage High graduate, runs off the field while playing for American River College of Carmichael in 2016.