David Shelton poses with son Dominique Shelton after a Santa Barbara City College game in 2016, when they played and coached for the program. 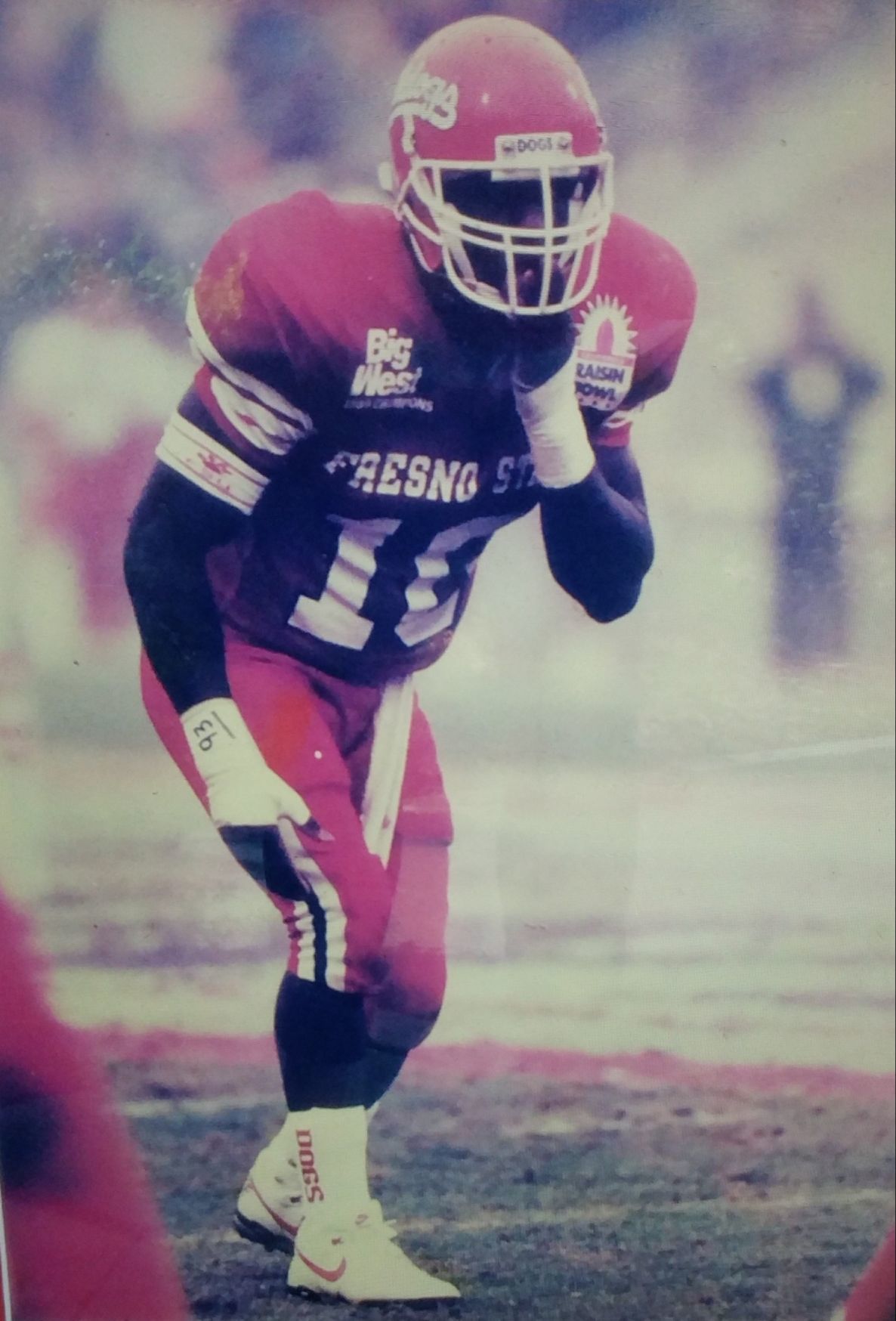 David Shelton is shown when he played for Fresno State. 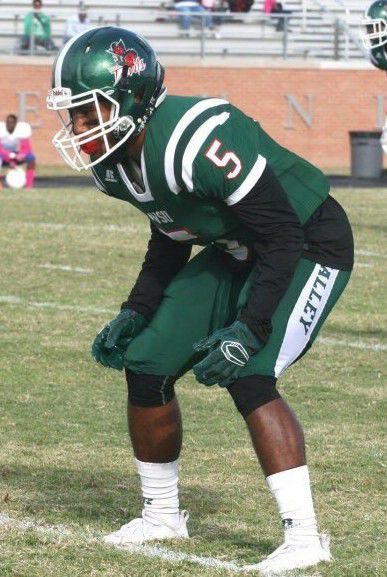 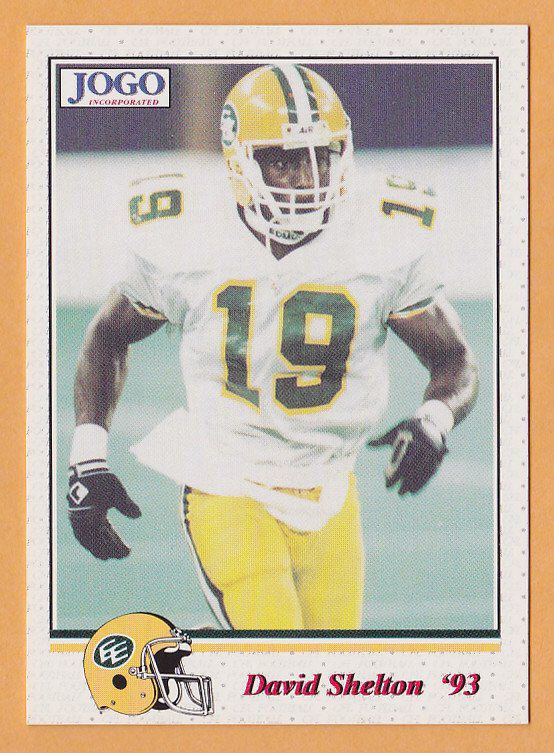 David Shelton is seen on his Edmonton Eskimos trading card.

Shelton was Justin-Siena’s defensive backs coach during the 2014 and 2015 seasons when his son, Dominique Shelton, played for the Braves. Dominique is a junior defensive back at Northwest Missouri State University and played his freshman season of college football at Santa Barbara City, when his father was an assistant coach there.

David Shelton began coaching at Justin-Siena after Dominique transferred there following his freshman year at Rodriguez High in Cordelia.

“He had all the credentials,” said Rich Cotruvo, who led Justin-Siena to six North Coast Section titles as Justin-Siena’s head coach from 1997 to 2015. “He really knew what he was talking about. He knew the techniques. He knew how to work with each kid individually. He was just such a positive force for the whole team and very supportive of the kids and the staff. He just fit right in.

“I wasn’t as good of a coach without Dave on my staff, I felt. Everything that I would forget about or I wasn’t aware of, he would see it and take care of it, whether it would be on the sideline or on the practice field. He’s always a positive, upbeat guy. He’s a great example and role model for kids and for everyone. A great person.

“His expectations of you were just as important if you were a third-string guy as opposed to a starter. You were an important part of the team.”

David Shelton and his family made their home in the Green Valley area of Solano County. He left Santa Barbara City after four seasons with the Vaqueros and joined the staff at Arizona Christian, a private NAIA Division I school, located in Glendale, in February.

David Shelton enjoyed his years at Justin-Siena. The Braves beat Saint Mary’s of Albany in the 2014 NCS Division IV title game, 18-10. It was their second championship in three years.

“It was a phenomenal program, phenomenal school, with great people,” he said in a telephone interview. “A lot of success, a lot of good kids.”

Cotruvo was honored by Justin-Siena in 2015 after attaining his 200th career win as a varsity head coach. He was named as the California Small School Coach of the Year by Cal-Hi Sports in 2004, CIF Model Coach of the Year and the North Coast Section Honor Coach in 2009, and the National Federation of State High School Association’s Western Regional Coach of the Year in 2010.

Arizona Christian won its season finale in 2019, beating Texas College, 24-20, to finish 6-4 overall and 6-2 in the Sooner Athletic Conference.

“Even though I tried to get (Shelton) to stay, he always had aspirations about coaching in college,” said Cotruvo. “That’s where he felt like he always wanted to be.

“Dave is a very special guy. I just can’t say enough great things about him. He had the right temperament and he had the right attitude, the character. He was involved in shaping lives and making sure kids achieved their dreams, and held them accountable. He didn’t mind telling me what he thought, which I always appreciated. He understood the big picture. I just really appreciated that about him.”

Cotruvo turned Justin-Siena into one of the top programs in the Bay Area and Northern California. He led the Braves to three league championships and two NCS runner-up finishes.

Cotruvo went to Terra Linda High in San Rafael after parting ways with Justin-Siena in 2016. In three years at Terra Linda, he led the Trojans to a 19-15 record with three consecutive NCS playoff appearances. He retired from his position as the Trojans’ head football coach in 2019. He is an instructor on the staff, teaching health and P.E. classes.

“In a nutshell, if I was a head coach and I was putting together a staff, one of the first people I would go get would be David Shelton,” said Vargus, who is currently the defensive coordinator at St. Helena High. “One of the best coaches I’ve ever worked with. Always positive. Always knowledgeable. Just loved to talk defense with him. Just a quality guy, inside and out. He’d be one of the first guys I’d pick on my coaching staff. Anybody who has him on his staff is going to be better for it.

“He helps everyone just get better. I was blessed to work with him on the defensive side. It was too short of a time. I wish I would have had more time with him. He’s one of the best coaches I’ve ever worked with. Loves teaching the game. I miss working with him.”

David Shelton started out in the game by playing in the Oak Grove Youth Football organization in San Jose.

He played both free safety and strong safety at Oceana High-Pacifica. He graduated in 1985.

He played strong safety in 1986 and ’87 at City College of San Francisco.

After a redshirt year, he played strong safety for coach Jim Sweeney at Fresno State in 1989 and 1990. He graduated in 1990 with a degree in criminal justice.

He continued his career by playing for the Edmonton Eskimos of the Canadian Football League from 1990-1994. Edmonton won the CFL’s Grey Cup championship in 1993.

David Shelton is settling into his new coaching position at Arizona Christian.

“The adjustment has been really, really good,” he said. “The coaching staff is phenomenal. The demands are higher and so accountability is higher.”

Dominique Shelton transferred to Mississippi Valley State in 2017 after playing his freshman season at cornerback for Santa Barbara City. He was credited with 38 total tackles, including 26 unassisted stops, for Santa Barbara, which tied for second place in the American Pacific Division and lost to Moorpark 49-12 in the Beach Bowl.

Shelton was a finalist for Player of the Year on the 2015 Napa Valley Register All-Napa County team.

He was named second-team defense as a defensive back on the Prep2Prep.com All-North Coast Section team.

He was selected to the San Francisco Chronicle’s 2015 All-Metro Team as an honorable mention North Bay defensive back.

Shelton played in 11 games for Mississippi Valley State during the 2018 season and made 32 total tackles. He broke up 10 passes and forced a fumble.

He then transferred to Northwest Missouri State University, an NCAA Division II school. He missed all of last year’s season due to having surgery for a torn ACL.

Napa High junior Brock Bowers, a tight end, took to Twitter to announce that he has committed to the 2021 All-American Bowl.

Featuring the top 100 high school players in the country, the game is scheduled for Jan. 9, 2021 at the Alamodome in San Antonio. NBC will carry the game.

The announcement of Bowers’ commitment was also made at aab.nbcsports.com.

He played in nine games for Napa (7-4 overall) last year and caught 39 passes for 1,098 yards with 14 touchdown receptions. He also ran for 316 yards on 22 attempts and scored three touchdowns for the Grizzlies, who finished second in the Vine Valley Athletic League at 4-2.

Napa lost to Clayton Valley Charter-Concord, 35-9, in the first round of the CIF North Coast Section Division II playoffs.

Bowers was also chosen as the Vine Valley Athletic League’s Most Valuable Player. He was named as the Prep2Prep 2019 North Coast Section Junior of the Year, according to prep2prep.com, and was named to the SportStars’ All-NorCal Football Offense 2019 Roster, as announced by sportstarsmag.com.

Vintage High’s Jacob Aaron, a two-year starting quarterback, is on a list, put together by MaxPreps.com, that highlights “144 West regional prep players worthy of more college attention.” MaxPreps conducted a nationwide survey of high school coaches this past winter.

The report, “West high school coaches select most overlooked 2021 football recruits,” was announced on May 1.

“In less than a week, more than 500 surveys were returned, highlighting why these players, almost all with little or no college attention, would help any FBS, FCS, Division II or Division III program,” MaxPreps.com reported.

Aaron, a junior, is on the list with the Class of 2021 West players.

He was named as a finalist for Player of the Year on the Napa Valley Register’s 2019 All-Napa County team.

Stevie Johnson, who played in the NFL for eight years as a wide receiver, is returning to Rodriguez High, his alma mater, to take over as head coach.

Johnson takes over for Stephen Meyers, who resigned after three seasons.

“I’m looking to win league my first year,” Johnson told Fairfield’s Daily Republic newspaper. “I don’t think any coach steps in a position expecting to fail from the jump. So my timetable is as soon as possible.”

The top five most popular high school football teams in California are Mater Dei-Santa Ana at No. 1, St. John Bosco-Bellflower at No. 2, De La Salle-Concord at No. 3, Folsom at No. 4, and Centennial-Corona at No. 5, according to a report at MaxPreps.com on May 11.

“Our numbers show that interest and attention follow success in high school football,” MaxPreps.com reported. “We compiled the numbers on high school football teams with the most views on team pages combined with followers between April 2019 and April 2020. No surprise, the results correlate closely with high-level success.”

David Shelton poses with son Dominique Shelton after a Santa Barbara City College game in 2016, when they played and coached for the program.

David Shelton is shown when he played for Fresno State.

David Shelton is seen on his Edmonton Eskimos trading card.