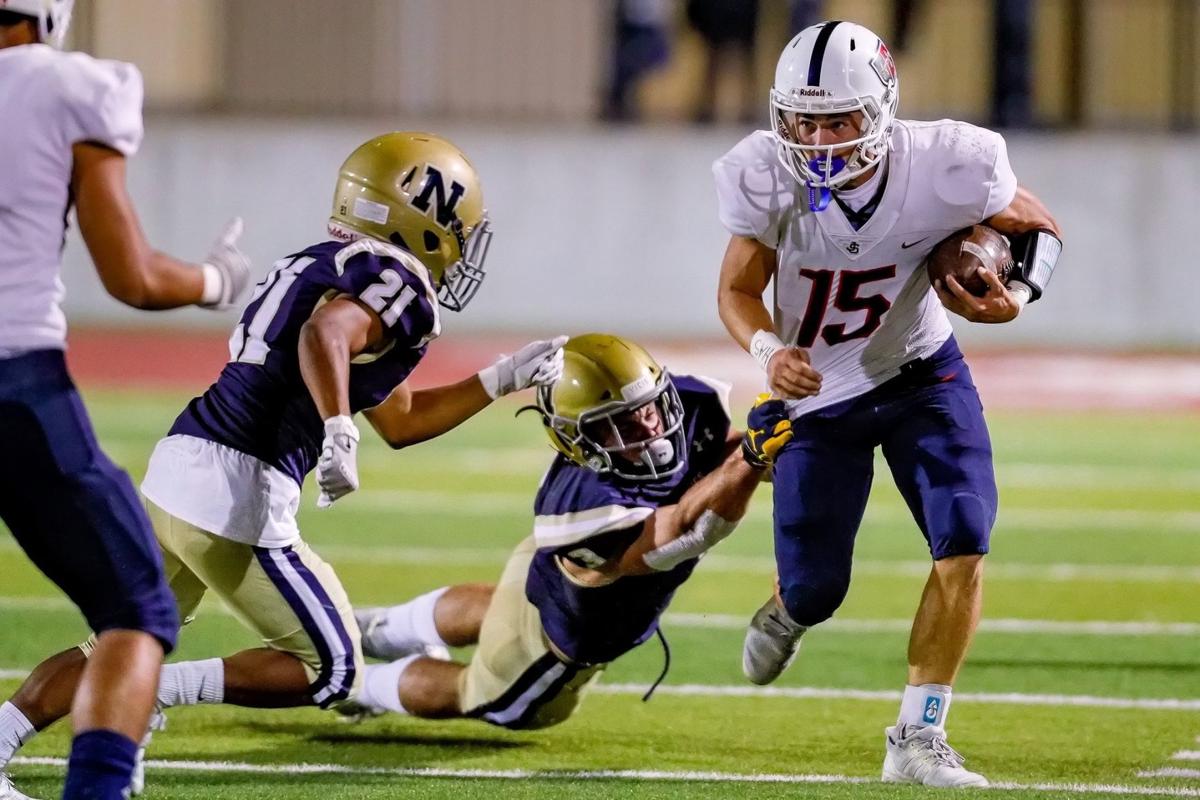 Blake Hoban breaks a tackle by Napa High's Brock Bowers after catching a pass during their Oct. 11 game at Memorial Stadium. 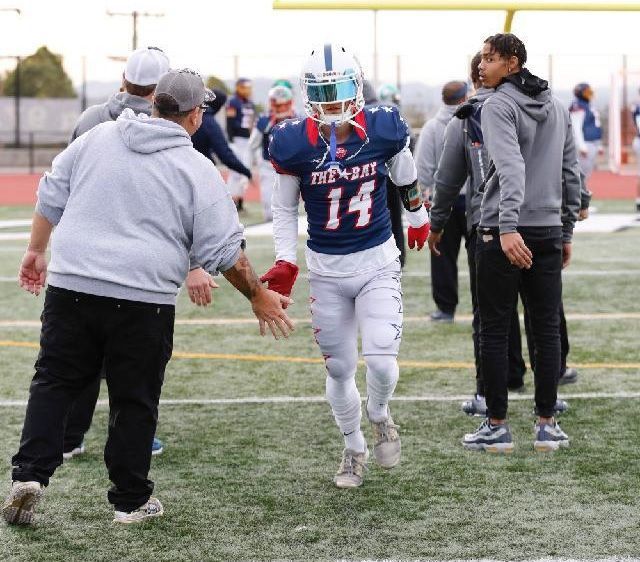 Justin-Siena senior Blake Hoban of The Bay Blue greets members of the Red team after the Battle of California All-Star Game at Laney College in Oakland on Jan. 18. 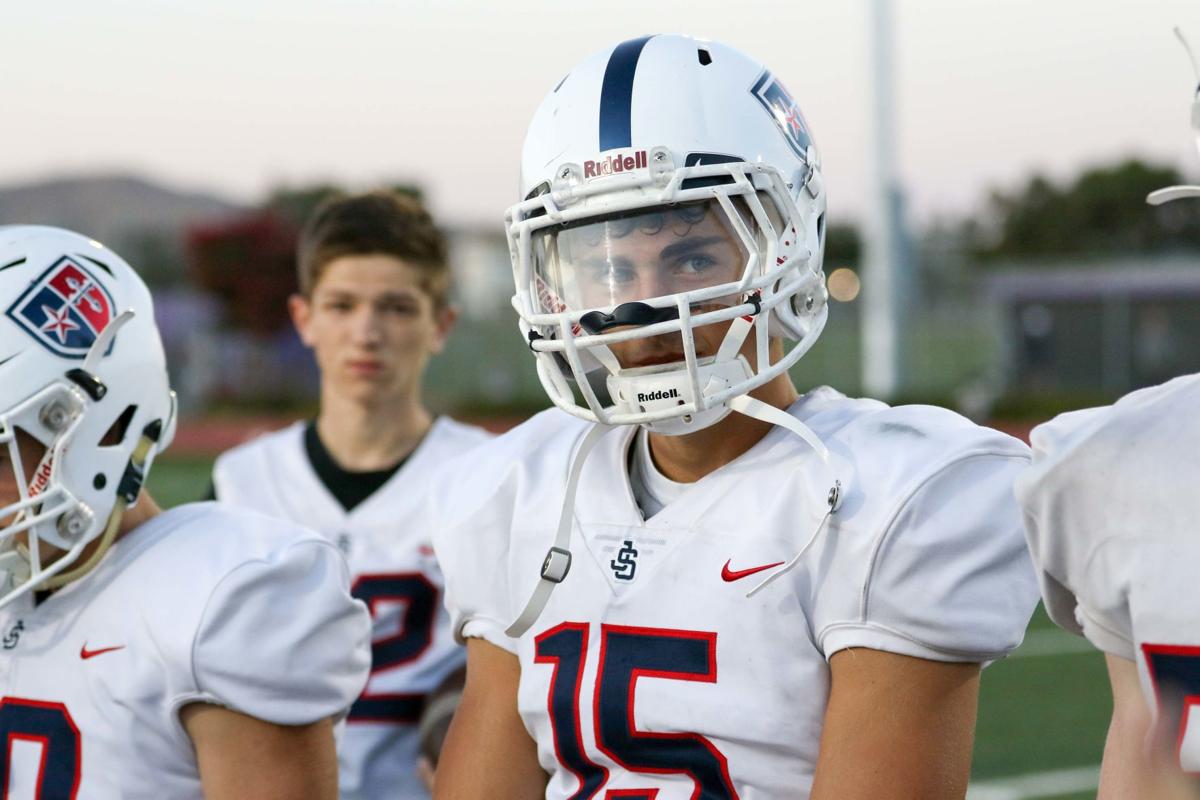 Blake Hoban waits with fellow Justin-Siena captains for their game against Armijo to begin on Sept. 6, 2019 in Fairfield.

Blake Hoban was the star of this year’s Justin-Siena track and field team, helping the 4x100-meter relay team take first place at the Santa Rosa Big Cat Invitational and placing second in the 100 meters in a personal-record 11.55 seconds.

But he didn’t want to run track at the next level. He wanted to play football in college, but he had to get his name out there to make it happen.

Despite having the third-most receiving yards in the Vine Valley Athletic League, he was named Second Team All-VVAL and – in a year that saw all six Napa County teams make the playoffs for the first time – didn’t make the 2019 All-County Football Team.

But offers started to come in after he was one of 16 Napa Valley seniors who were picked for and played in the seventh annual Tri-County All Star Football Game on Jan. 11 at Windsor High.

Interest in Hoban really picked up after he played with teammate Miles Williams in another all-star game a week later, for The Bay Blue Squad against San Diego in one of two “Battle of California” organized by Break The Hudl Sports at Laney College in Oakland on Jan. 18.

“That got us a lot of exposure,” he said, thanking head coach Brandon LaRocco for nominating them.

But when he visited Southern Oregon University, the Ashland program that won the NAIA Championship in 2014, he found his home. He committed to the Raiders on June 7.

“SOU gave off really good vibes and it’s located in a small town,” he said. “As soon as I showed up for my visit, I felt extremely welcomed by all the coaching staff and some players. The coaches all were amazing. As soon as I got to campus, they all were extremely welcoming and made me feel at home.”

It was a big relief for the 5-foot-11, 175-pound Hoban, who had to compete for coaches’ attention with the worldwide COVID-19 pandemic and the possibility there might not even be college football this year.

“It was pretty hard,” Hoban said. “I had a few more official visits planned out when COVID hit, which is another reason why SOU felt right. Throughout this whole pandemic, they stayed in touch and worked out a plan with me.”

Southern Oregon is scheduled to open its season on Aug. 29 with a Frontier Conference home game against Rocky Mountain College of Billings. Montana.

“I’m still waiting on the coaches’ word, but the earliest I’d head out is mid-August,” Hoban said.

The Braves had their best season in LaRocco’s five years as head coach, tying for fourth place in the VVAL with a 3-3 mark and finishing 8-4 overall, and Hoban was their game-breakers.

“We always put him on the other team’s best receiver,” LaRocco said last season. “We have transitioned him to safety this year because he can come down and support in the run game really well, too. Blake not only has top-level speed, he is also incredibly strong.”

Hoban played defensive back in the Jan. 18 all-star game, but believes the Raiders will play him on offense.

“Obviously some things need to still be worked out, but I’m thinking I’ll be playing the slot wide receiver position the most,” he said.

He said he’s undecided on a major, but is considering something related to digital media.

The son of Juliet and Richard Hoban – who also competed in high school football and track and field, along with basketball, at Foothill-Pleasanton – said he may also run track and Southern Oregon.

“I never really thought I would ever go for only track and not football, but running track is definitely something I would want to continue at SOU,” he said.

The Raiders beat Marian University of Indiana for the national title in 2014, and lost to Marian in the 2015 title game. They went 12-1 in 2017 under new head coach Charlie Hall, going 10-0 in Frontier Conference play and losing only to Reinhardt University of Georgia in the national semifinals.

They have had 2015 American Canyon graduate Michael Chisley Jr. on their roster since he redshirted in 2015. Chisley had eight tackles in 2016, 19 tackles, an interception and a fumble recovery in 2018, and a 96-yard kick return and six tackles as a redshirt junior in 2019.

“It’s amazing, honestly,” Hoban said of all the signings from the smallest school in the VVAL. “I love these guys and loved playing with them. Watching us all split up and go our separate ways is sad and all, but I’m really excited to see what we all do these next few years.”

The Justin-Siena football team has opened the 2019 season with an unblemished record against nonleague foes, and a lot of credit has to go to …

Blake Hoban breaks a tackle by Napa High's Brock Bowers after catching a pass during their Oct. 11 game at Memorial Stadium.

Justin-Siena senior Blake Hoban of The Bay Blue greets members of the Red team after the Battle of California All-Star Game at Laney College in Oakland on Jan. 18.

Blake Hoban waits with fellow Justin-Siena captains for their game against Armijo to begin on Sept. 6, 2019 in Fairfield.