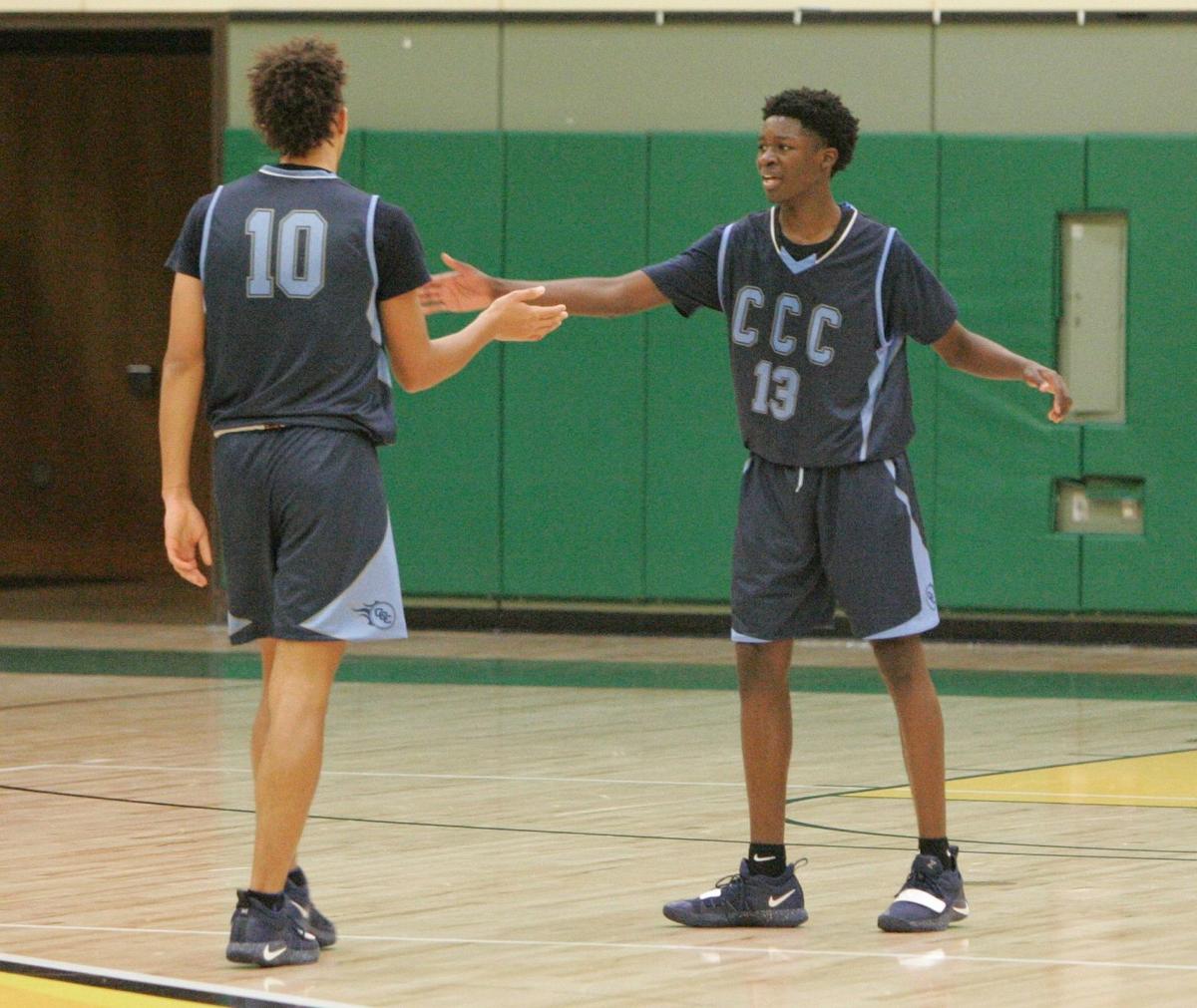 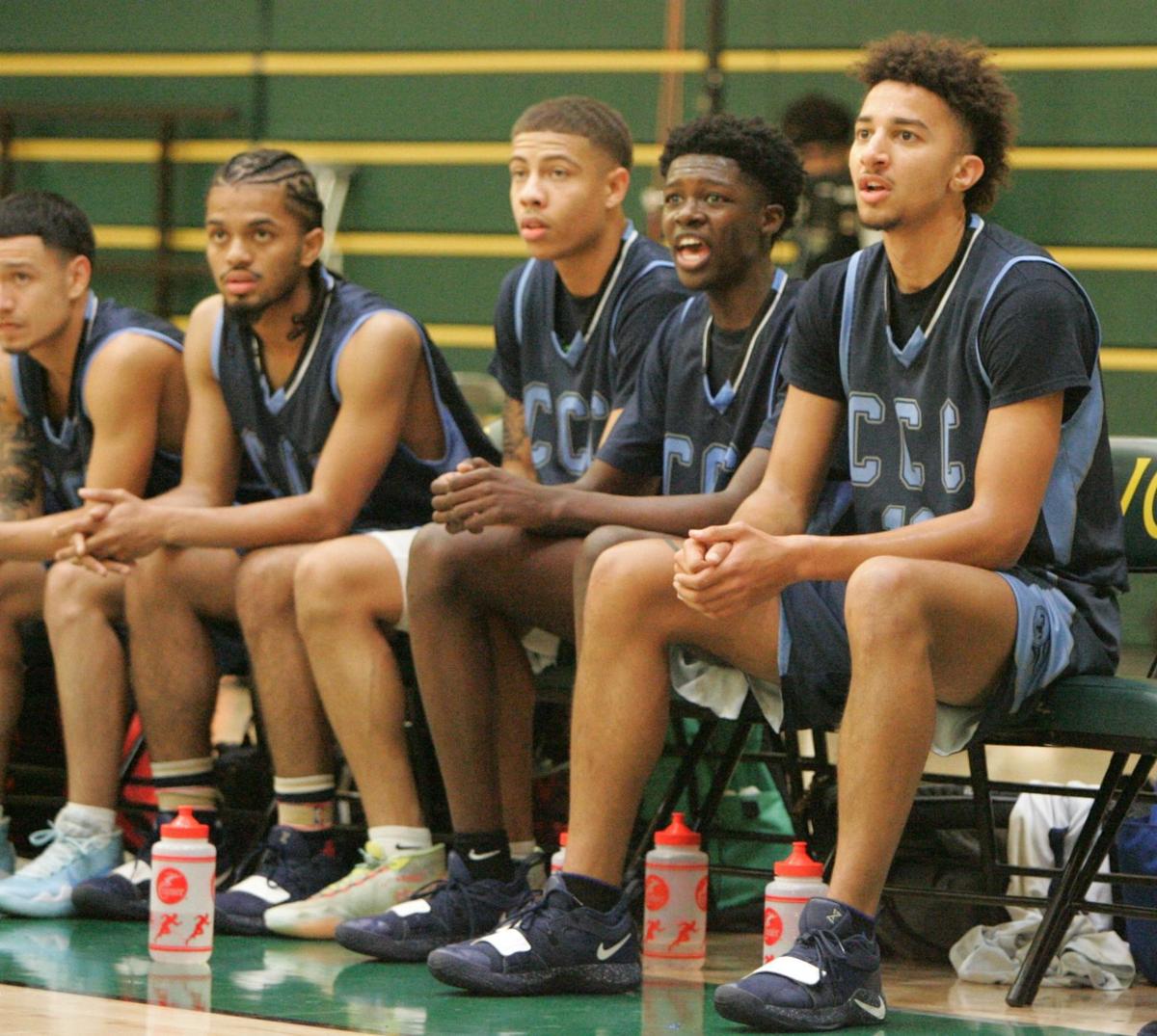 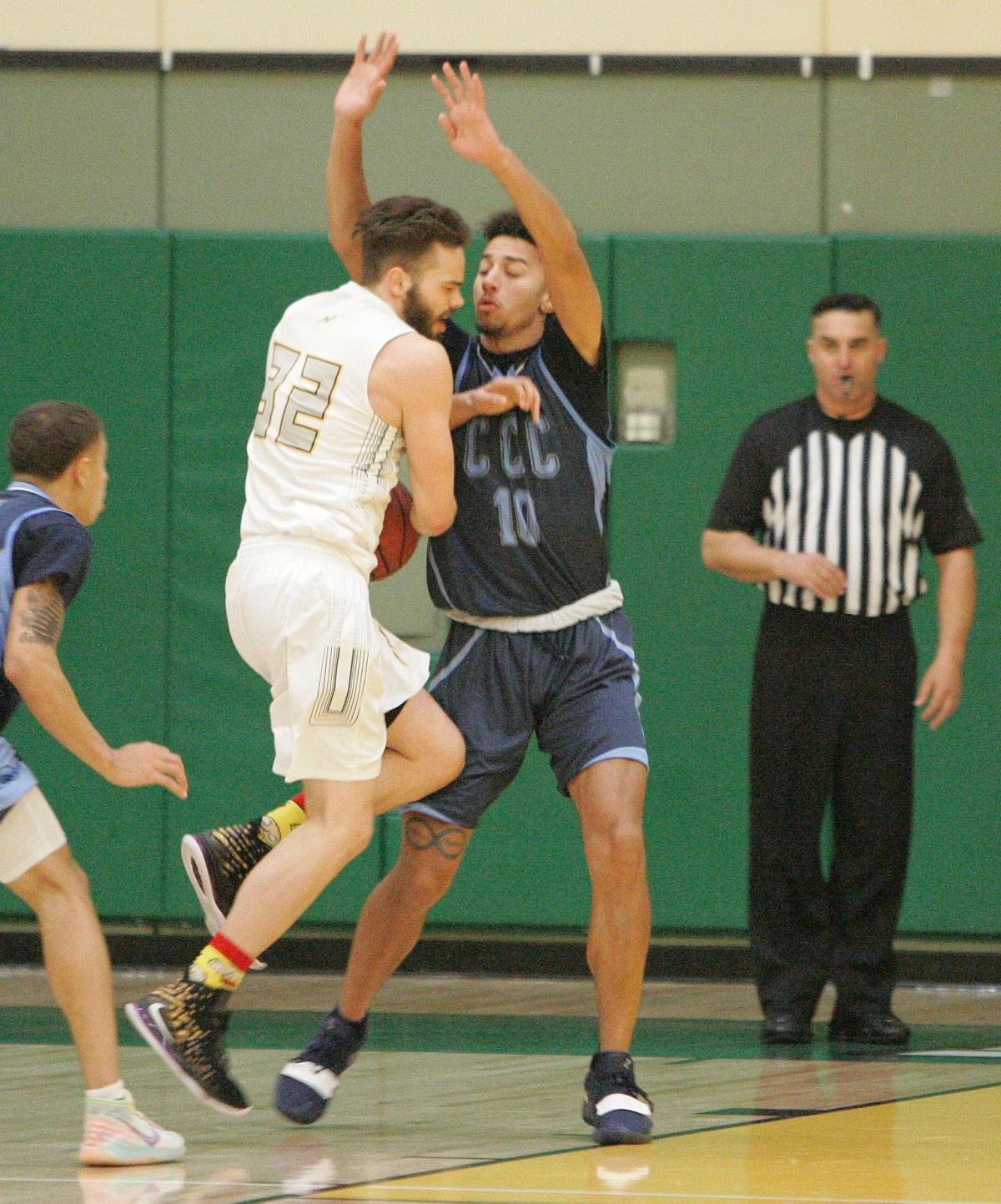 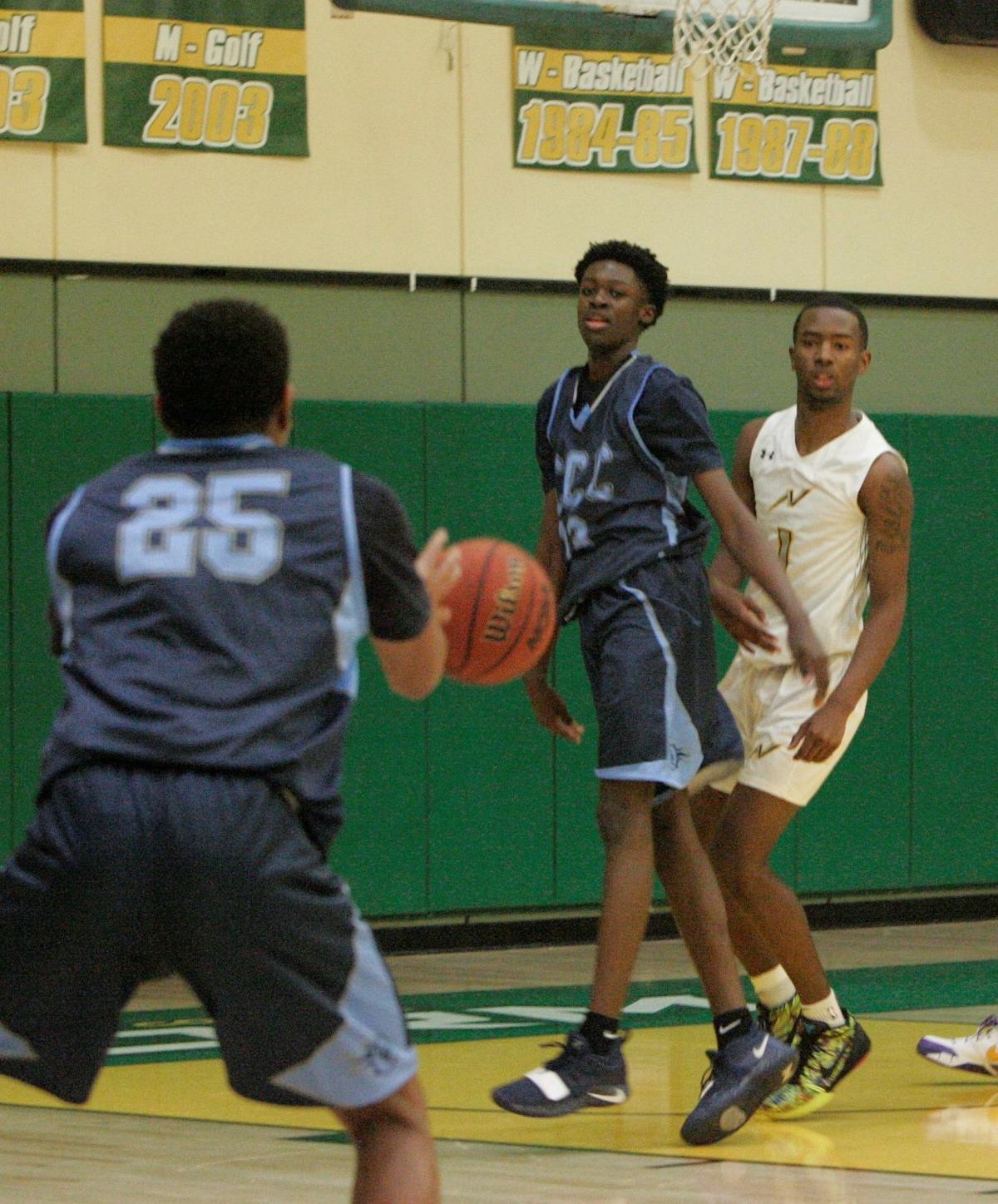 Most high school athletes play for community colleges in hopes of signing with universities after one or two seasons.

John Wade III, a 2018 American Canyon High graduate, was already at a four-year school, UC Davis, but not playing basketball for the Aggies’ NCAA Division I program.

Sam Johannessen, a 2019 American Canyon alumnus, was on the verge in February of signing with Rocklin NAIA school William Jessup University to play basketball, but had second thoughts.

Wade had already decided to transfer to Contra Costa College, the San Pablo school where his father, John Wade II, has been the athletic director since 2001.

“I missed playing basketball, and I had a growth spurt,” Wade III said after getting his second dunk of the season in a 69-63 win at Napa Valley College on Friday night. “I was like 6-foot-2 in high school. I’m 6-4 now.”

Wade didn’t think he and Johannessen would be teammates again until he helped persuade his friend to join him at Contra Costa and play for Miguel Johnson, the Comets’ head coach since 2006.

“I told him ‘You might as well go to a JC for a year or two and see what you could get’” in terms of an offer to a bigger school, Wade said.

“We had a lot of conversations,” Johannessen said of Wade after the win at NVC. “We wanted to play together again. I feel like we have a lot of chemistry on the court. I have high goals and expectations for myself, and I’m pushing myself in practice every day to get better. I had some problems with my knee, but it’s getting a lot better.”

It’s the first time they’ve played together since Wade was a junior and Johannessen a sophomore on the 2016-17 Wolves’ squad, which finished in a three-way tie for second place in the former Solano County Athletic Conference behind Vanden.

American Canyon finished second to Vanden again, alone, the next year. But Johannessen had to miss it all following knee surgery to repair a torn ACL. He came back last winter to help the Wolves finish second to Napa in the new Vine Valley Athletic League. But he felt he needed more than one season to get ready for four-year college ball, and Contra Costa was the answer.

“I felt Coach Johnson and Mr. Wade had our best interests,” Johannessen said. “I was very close to signing with William Jessup – I had a good relationship with Coach V (Lance Von Vogt) – but I just wasn’t ready yet. I still stay in contact with them, though. I wanted to go the junior college route and test the waters and really just get better and develop my body, too. I hope to transfer after this season or the next. I’ve still got stuff to work on.”

He and Wade live in American Canyon and commute about 40 minutes to school, usually together.

They also have similar stats. The 6-foot-6 Johannessen averages 4.4 points and 3.6 rebounds and Wade nets 4.5 points and 3.2 rebounds. But as the main point guard, Wade leads the team with 2.3 assists.

Wade said he’s still finding his rhythm after being sidelined for basically nine games in late November and early December. He sat out five games entirely and playing eight minutes or less in the other four during that stretch.

“I didn’t play at the beginning of the season because of hip and knee injuries, because I’m growing still,” he said.

The Comets are still in seventh place in the nine-team Bay Valley Conference at 2-4, 5-13 overall, after the win at NVC (4-13, 2-3 BVC), which is in a three-way tie for fourth place. Contra Costa has four sophomores and nine freshmen.

“We’ve lost a lot of close games where we let them slip away because we’re young,” Wade said. “It would come down to the end and we’d turn it over and have arguments. We’re just growing as a team. We should be really good next year, though.”

Wade said he and Johannessen enjoy playing at NVC and Solano. Fans on Friday yelled the pair’s names more than any others. During a recent 81-77 loss at Solano, Wade said, some of their former American Canyon teammates came to cheer for them.

“It was like a high school matchup, definitely, and we let it slip away,” Wade said.

“It gets real competitive,” Johannessen added. “We’ll get ‘em back, though.”

First-place Yuba (15-3, 6-0 BVC) visits Napa Valley on Wednesday before taking on Contra Costa at Diablo Valley College on Friday, both with 5:30 p.m. tipoffs.

“I don’t know if we’ll pull it out. Hopefully we will,” Wade said. “We’re definitely growing, getting more chemistry as we go,” Wade said. “We had a couple of guys that came in late and some people left the team, so we’re just trying to jell now.”

Added Johannessen, “Conference is really when we figured out who we were.”

Wade is also willing to play another season for the Comets.

“But if I get (an offer) this year, I’ll see what happens,” he said. “I’d like to stay in-state, stay closer to home so my family can watch me play – Pac-12, Big West, something like that.”

Wade, a mechanical engineering major, feels playing for Johnson will give him the best chance to play Division 1 ball.

“He’s pushed me to be a better defender,” Wade said.

Added Johannessen, who plans to major in sociology, “He pushes us a lot in practice every day and over the summer. He pushes us real hard. He’s a good motivator. Our assistant coaches have a lot of trust in us and they push us, too. Their No. 1 goal is to get us to where we want to be.”

Johnson, who played for Richmond High and Contra Costa, was the head coach at Merritt for two years before coming to Contra Costa, and before that was an assistant for the Comets.

“I knew John (Wade III) when he was growing up and went to Bishop O’Dowd, and then they moved to AC. I had seen Sam when he was a freshman and sophomore before his injuries, but I stayed in contact and recruited him. There’s potential in both of those guys. For John, being off a year, not playing a lot when he was in high school, he’s starting to come into his rhythm being able to play point guard and off the ball a little bit, help us out.

“Sam, moving him from a post position to more on the perimeter, he’s just got to develop his skill set a little bit – how to pass, handle the ball, move laterally. So the potential is there for those guys.”