Napa Valley College Athletics: No more golf, baseball for NVC this spring
Share this
1 of 5 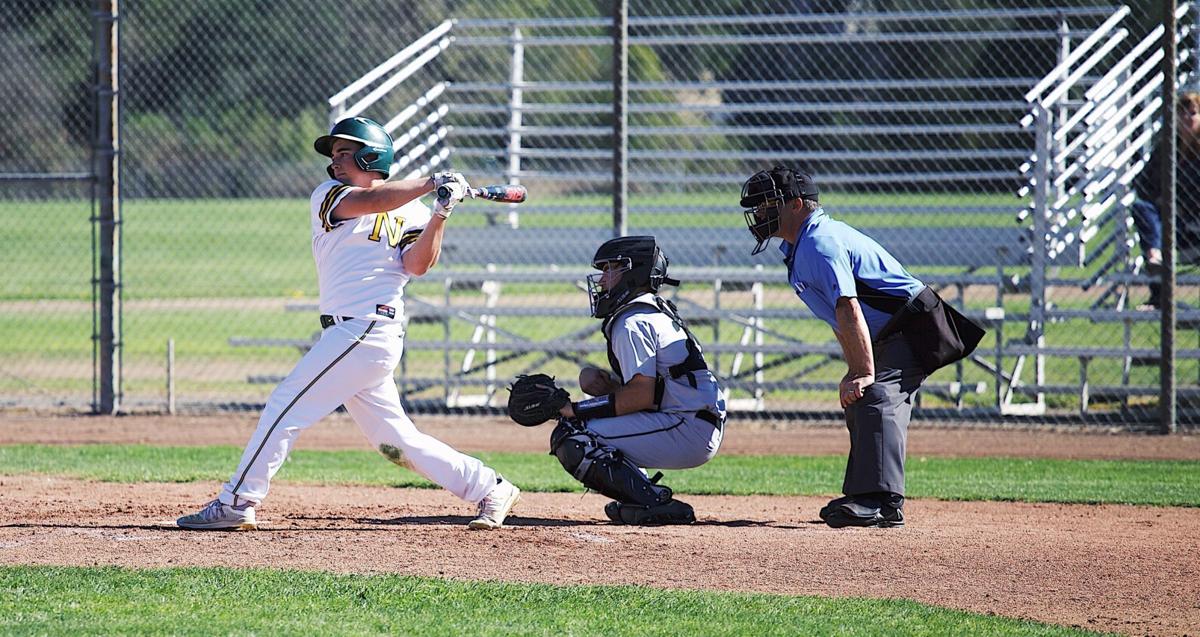 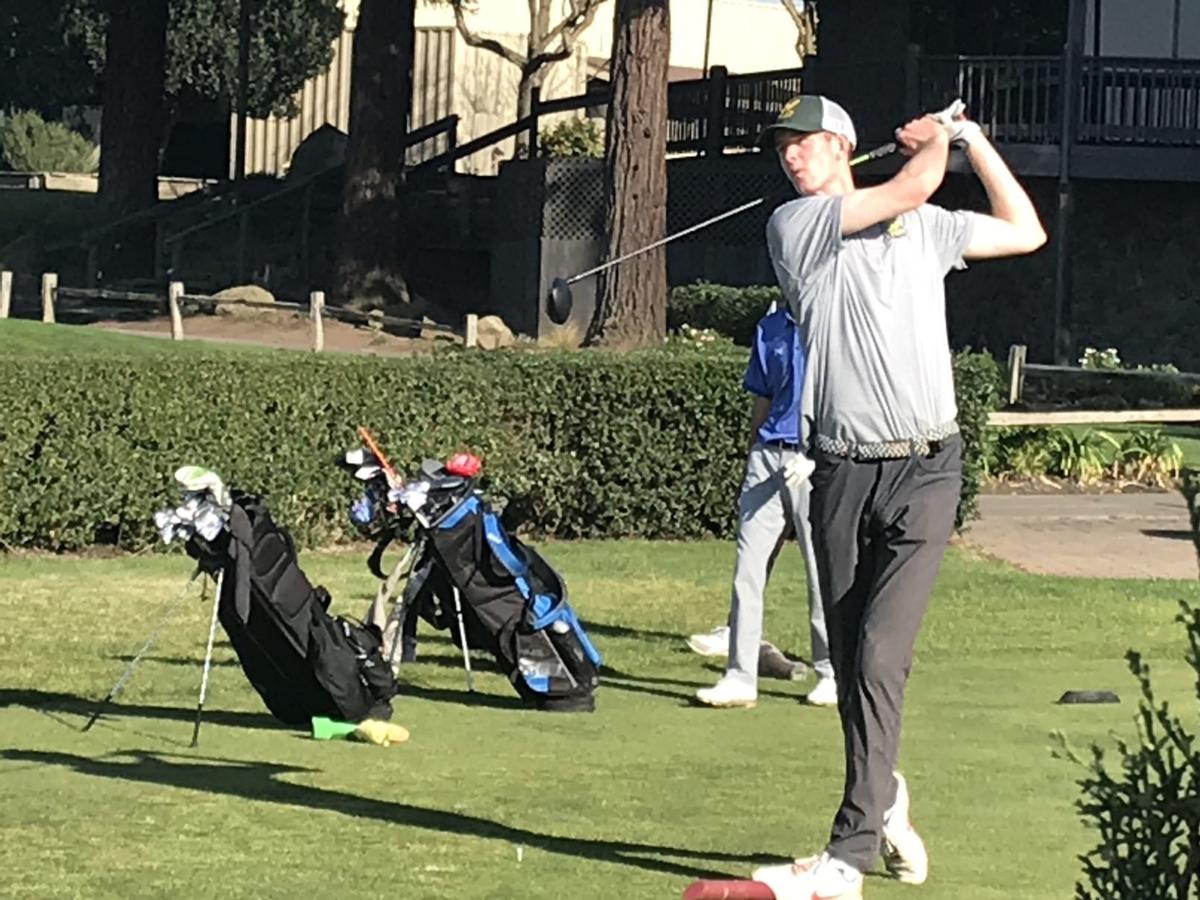 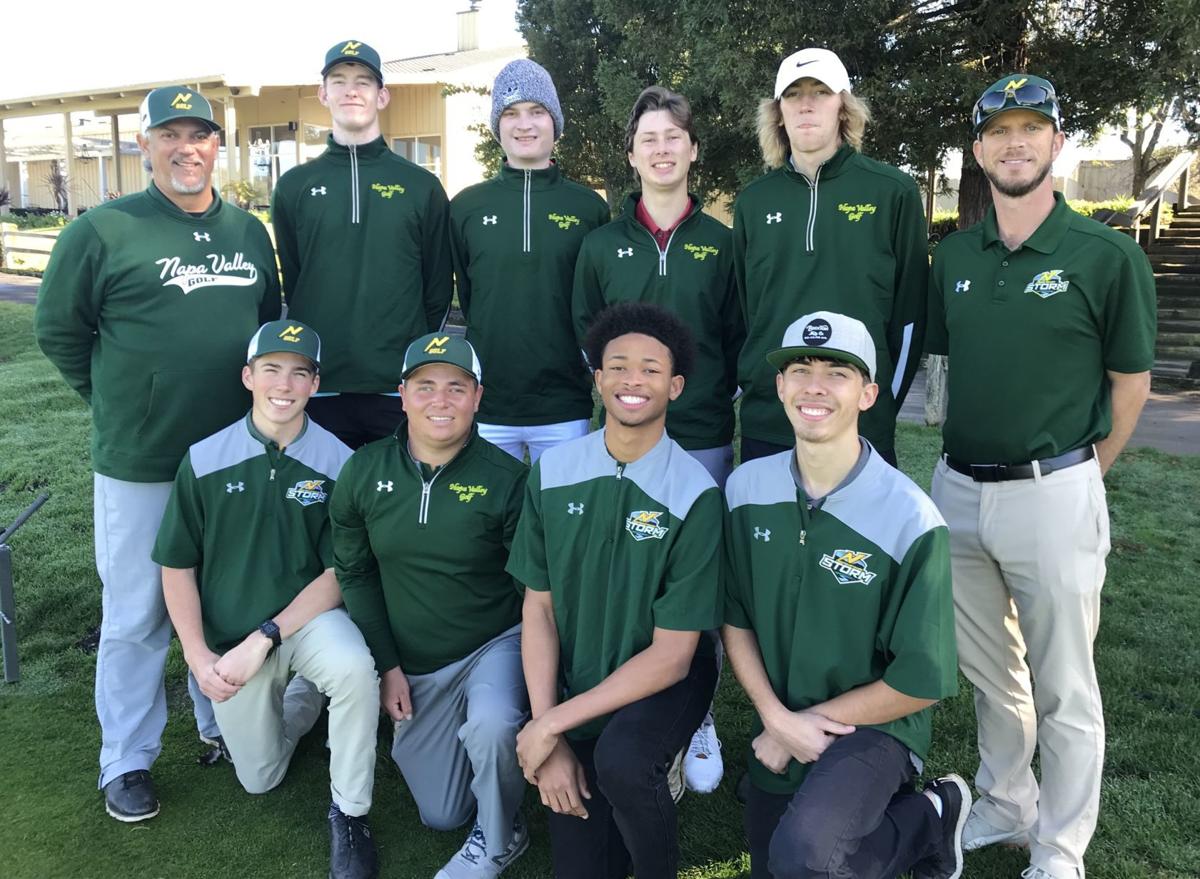 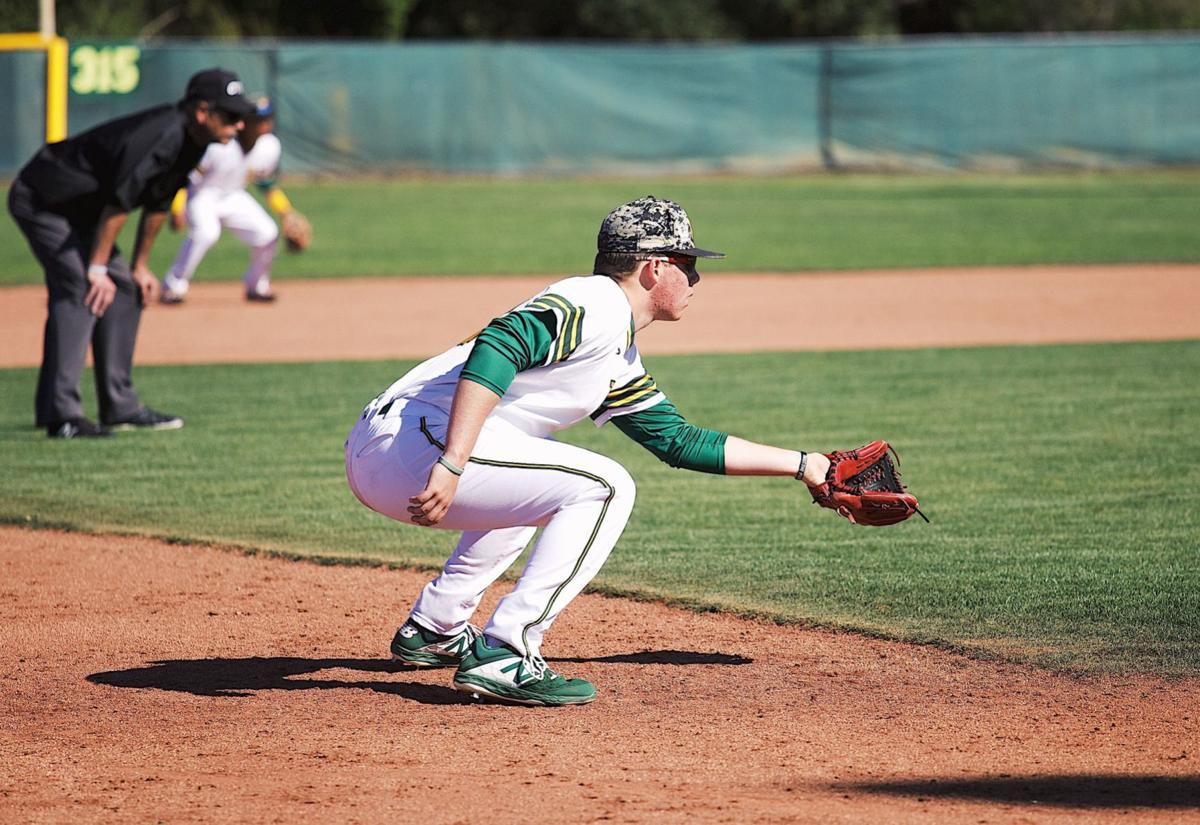 St. Helena High graduate Jack Adkins gets ready for a pitch while playing third base for Napa Valley College during a game this season. 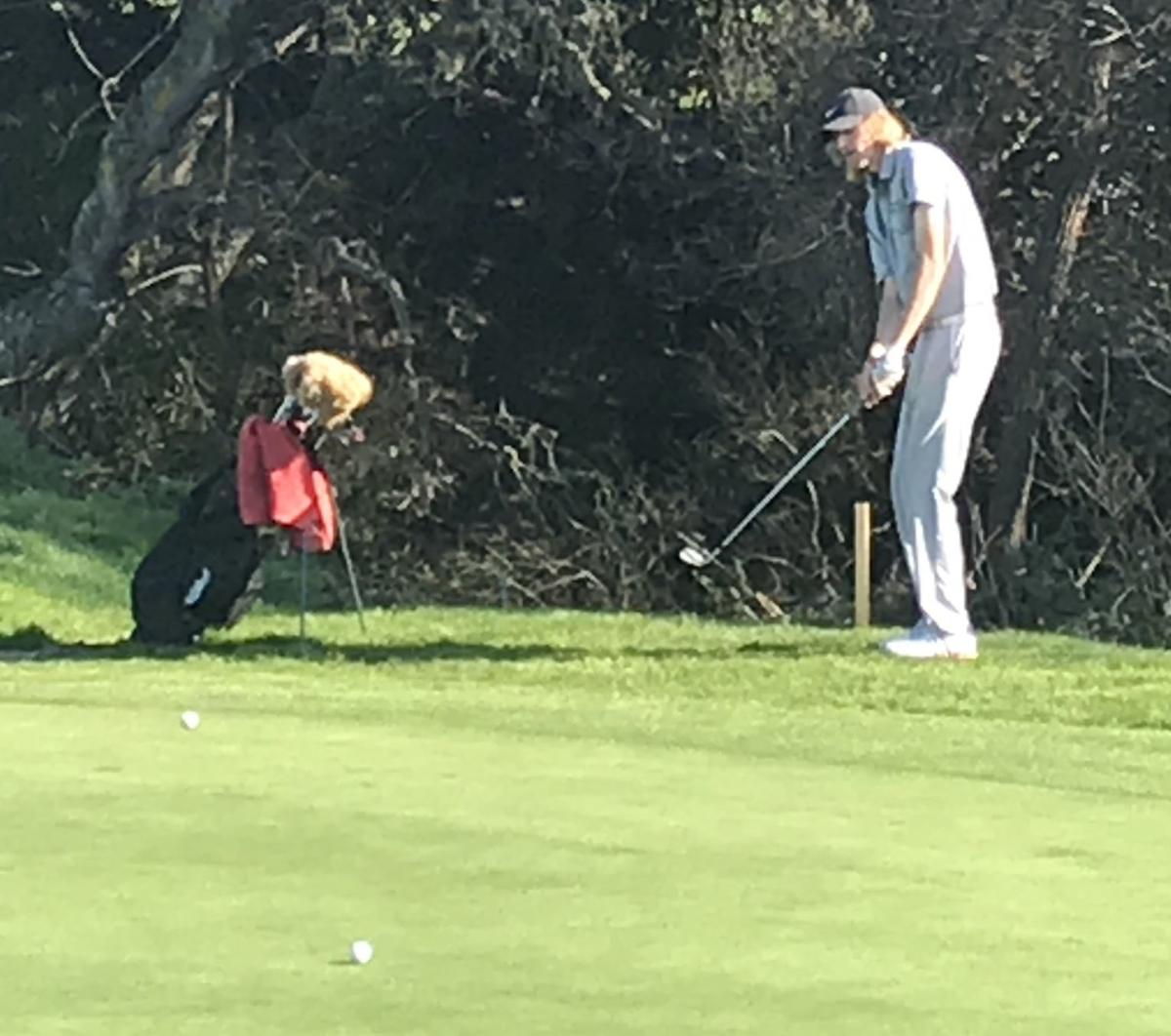 Napa Valley College's Keelan Cole gets in some chipping practice before a recent tournament at Chardonnay Golf Course.

Napa Valley College was in the midst of having one of its best seasons of men’s golf in many years, while its baseball team was looking to make another late-season push.

That was until the California Community College Athletic Association Board of Directors voted unanimously on March 19 to cancel the remainder of the 2020 spring sports season due to concerns over COVID-19.

“… With campuses throughout the state closed and most classes taking place online, and with the uncertainty about when conditions will improve, the Board of Directors voted to cancel the spring sports seasons,” the CCCAA reported on its website, cccaasports.org.

The golf team had won three Big 8 Conference tournaments as well as the Chardonnay Invitational and Rancho Murieta Shootout. The Storm were halfway through their conference tournament season when the CCCAA, the state’s governing body for intercollegiate athletics, voted to cancel spring sports seasons throughout the state.

The Storm were led by Charles Porter, a very talented freshman who won the men’s championship bracket of the San Francisco City Championship at TPC Harding Park on March 1,

“I’m deeply saddened that our season ended just like that,” NVC golf coach Bob Freschi said. “I feel for our players who believed they were going to be conference champions and take down Folsom Lake College. But we fully understand that our season being canceled is so minor in relation to what is happening in the world today.”

The NVC baseball team had just started its Bay Valley Conference season when the CCCAA, an organization that provides oversight of intercollegiate athletics for 109 member schools within the California Community College System, announced the cancelation. In what turned out to be its final game, the Storm dropped a 21-2 decision at home to College of Marin-Kentfield, which had 25 hits, including 11 for extra bases.

“Obviously, there’s a lot of disappointment in the season being canceled,” head coach Dan Parker said. “But along with disappointment comes the understanding of everyone’s safety and well-being. I’m confident that college baseball will figure out the best way to provide athletes with the opportunity to fulfill their college careers.”

In an announcement on its website, the CCCAA said “the spring season of competition for approximately 9,500 student-athletes will be restored and face-to-face recruiting and recruiting-related travel is being prohibited immediately but will be re-evaluated next month,” according to cccaasports.org.

“Additionally, nontraditional seasons and practices outside of regularly scheduled classes are canceled through June 30, 2020,” the CCCAA said.

“The restoration only applies to the student-athletes’ status within the CCCAA. The NCAA, NAIA and other collegiate governing bodies are currently addressing similar issues and the CCCAA will continue to work with them to help student-athletes who wish to eventually transfer,” the state organization reported.

The state men’s and women’s basketball championships, scheduled for West Hills College-Lemoore, were canceled by the CCCAA.

The CCCAA also canceled its 2020 convention, scheduled for Ontario.

“College athletics are facing unprecedented circumstances and we are doing our best to address the concerns that have come about as a result,” Jennifer Cardone, CCCAA Interim Executive Director, said in a report at cccaasports.org. “Undoubtedly, it’s a challenging time but student-athletes are at the center of our focus as well as what’s in the best interest of our institutions.”

Here is a closer look at the NVC teams:

Freschi put together one of the strongest lineups that the Storm has had. The players have been in the program since last fall.

“Recruiting these men was a year-long process and after having a successful fall program, we knew we’d be good to start the spring,” said Freschi, who is assisted by David Knox, the Director of Instruction at Napa Golf Course at Kennedy Park and a member of the PGA of America and a Class A golf professional. “Come spring, we had a team of 10 golfers qualifying to get into the top 6. The top 6 played in our first match in Lompoc and never looked back.”

Also in the starting lineup are two more freshmen: Ryan Chamblee, who is from Vanden High in Fairfield, and John Scott Senz, who went to Concord High.

The team also has Brett Kranz, a freshman from Benicia, and Myles Norris, a freshman out of American Canyon.

Nathan Maples, who is from Willits, used the year to redshirt.

“We played extremely well to start our season,” said Freschi.

Napa Valley began the season with an 11th-place finish at the Point Conception Open, a 36-hole tournament at Lompoc’s La Purisima Golf Course in Santa Barbara County. There were 20 teams in the field.

The Storm began the Big 8 season with a win in the first tournament at Whitney Oaks Golf Club in Rocklin, and then shot a season-low 384 in winning their second tournament of the Big 8 season at Chardonnay. The Storm’s third win of the conference season came at the Reserve at Spanos Park in Stockton.

Four of the team’s players placed in the top-10 in the conference. Porter led the conference for scoring, and was followed by Cole at No. 3, Wilkinson at No. 7 and Amoroso at No. 10.

“We have a very talented team with a passion for golf and they were just coming into their own,” said Freschi. “We worked extremely hard while having a great time playing the game of golf.”

Tyler Toland went 1 for 4, James Espanosa 1 for 1, Eric Thomas 1 for 4 with an RBI, D.J. Pautin 1 for 3 with an RBI, and Austin Mattos 1 for 4 for the Storm, who had six errors and left 12 runners on base. Toland and Espanosa each had a stolen base.

Injuries took a toll during the season, with just 18 available players and a pitching staff short on depth at the time the season was canceled. Napa Valley ended the season on a four-game losing streak.

Napa Valley’s wins came in nonconference games, on Feb. 6 over City College of San Francisco, 8-7 in 11 innings, and on March 3 over Laney of Oakland, 4-1.

Parker had a team of mostly college newcomers this year.

“I think coaching a young team is the most difficult because you recruit based off of their ability to become a great player,” said Parker. “So sometimes you see talent in a kid even though he might not even see it yet. This creates high expectations instantly and puts more pressure on the players to succeed quicker than they really should be. With that said, I expected us to play better than we did, but I also saw flashes of talent that I didn’t realize were there.”

“To be honest, all of our players played extremely well when given the opportunity. We are so young as a group, so naturally mistakes happen and our mistakes just seem to be happening in crucial times,” said Parker, who is assisted by Warren Brusstar and Donnie Gardener.

“Our pitching and our offense both showed their strengths and will continue to get better. I think our weakest link was defense this year. Getting positive reps in the future will definitely help us work through that.”

St. Helena High graduate Jack Adkins gets ready for a pitch while playing third base for Napa Valley College during a game this season.

Napa Valley College's Keelan Cole gets in some chipping practice before a recent tournament at Chardonnay Golf Course.