The Latest: One dead in Indianapolis shootings amid protests 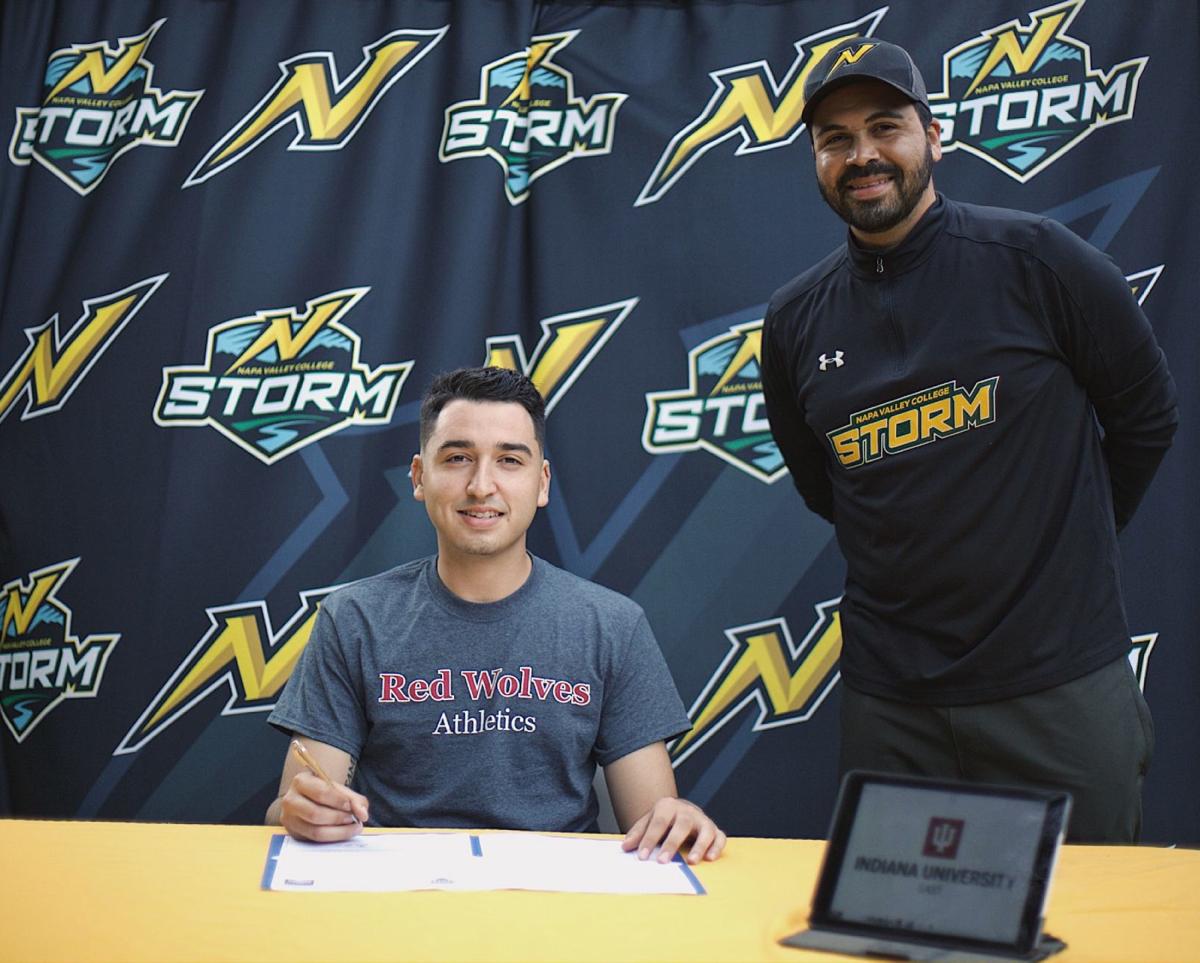 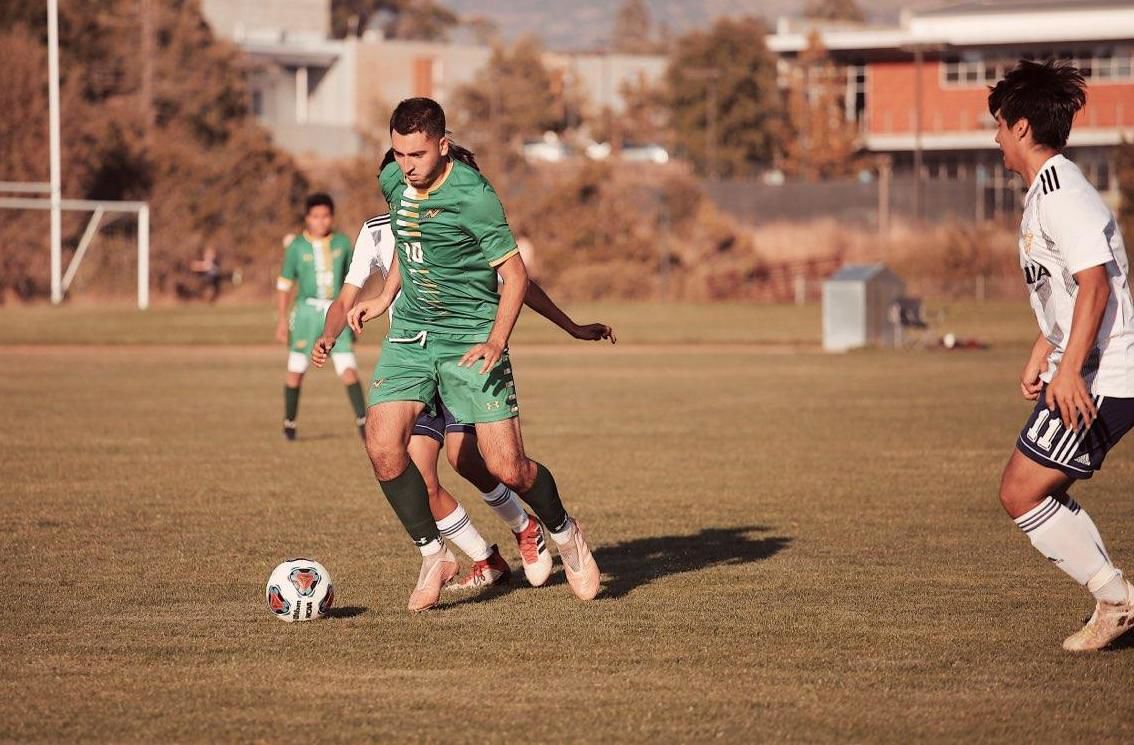 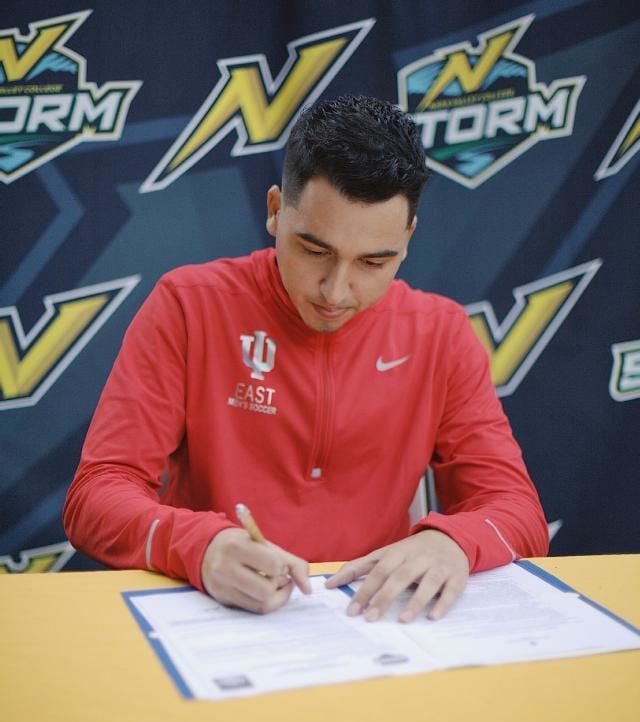 One of the most exciting high school boys soccer players to come out of the Napa Valley in recent years, Jesus “Chuy” Ochoa will finally get to show his skills for a four-year college.

The 22-year-old Napa Valley College sophomore, a 2015 Vintage High School graduate, signed a letter of intent on April 17 to continue his soccer career with NAIA power Indiana University East of Richmond, Ind., a small town in southeast corner of the state.

Ochoa – who won Monticello Empire League titles as a junior and senior at Vintage, and Bay Valley Conference titles at NVC in 2016 and 2019 – hopes to help the Red Wolves win a River States Conference title. It would be quite a jump for IU East, which under head coach Steve Moore finished sixth in 2017, fifth in 2018 and fourth last fall.

“The last three years, they’ve lost in the conference semi finals to the University of Rio Grande in Ohio, which is one of the top five programs in the country,” Ochoa said. “One of the goals is to reach the national tournament next year, but to get there we’ve got to win the conference tournament. So hopefully I can help us do that.”

Ochoa knew he wanted to play for a NAIA school because he would have two years of athletic eligibility left if he did, whereas he would have had one season left with a NCAA school. His offers included two from schools in the San Diego suburb of San Marcos, one from NCAA Division II school CSU San Marcos and another from NAIA member University of St. Katherine.

“Even if you have been a professional player, like in Mexico, you could play NAIA, and in talking to some friends on the East Coast who played NAIA, they’ve told me they’ve beaten every (NCAA) Division I school they’ve played.”

He tried to start his college soccer career in the fall of 2016 with Jefferson College, a Division I junior college outside St. Louis, Missouri, but a transcript issue kept him from ever playing for the school. He came back to Napa and, after getting injured again, learned at NVC how to become a serious student.

“I was extremely disappointed to not be able to play for Jefferson College, because at the time they were like a Top 25 program in the nation,” he recalled. “But at the same time, I couldn’t just think ‘What if I would have stayed there?’ I knew that I had to restart my life in Napa. It took me a couple of years.”

The 2014 Napa County Boys Soccer Player of the Year helped the 2019 NVC squad set a school record for conference wins and points as the Storm finished 9-8-2 overall and 8-1-1 in the BVC before losing 4-0 to Santa Rosa in the first round of the playoffs.

“That’s the funny part. I played as a defensive center mid and I still got offensive MVP,” he said. “Out of free kicks and penalty kicks, I was able to score. You can’t keep me out of the goal.

“I knew that this last fall was literally my last chance of getting recruited, so I put in some hard work and, thankfully, was rewarded. I was able to get myself a scholarship and head out to Indiana. I’m really grateful. I haven’t been to Indiana, but one of my roommates at Jefferson College in 2016 was getting ready to go there (IU East) and talked to me about the program, the school and the coaches, so that made my decision way easier. He really had a huge part in my decision. He just finished playing this last season and is gonna graduate in December. He lives like 50 miles from there.”

Ochoa, who also made the All-BVC First Team as a freshman, was the second-oldest player on the Storm last fall.

“With soccer, I don’t really have ambition to go pro. Since I was a little kid, my goal in life has been to represent a four-year school, and I finally got that opportunity,” he said. “What motivated me to never give up when I was injured is that we have so much talent in Napa for soccer.”

Ochoa said his role models are Vintage soccer alumni George Martinez and Adrian Maldonado. Martinez, from the Class of 2009, played two seasons for Jefferson College before finishing his soccer career at the University of San Francisco. Maldonado, a 2011 Vintage graduate, played four seasons for Cal State East Bay in Hayward.

“I’m happy that I’m able to do the same thing as my role models because I truly believe that young players who have injuries and see me get a scholarship can now say ‘Why can’t I do that?’ So one of the reasons why I’m doing this is to show future generation that it’s possible. It would be really awesome if I was to open the doors for other players in the Napa Valley.”

His mother is Celia and his father, Jesus Jr., is a cousin of both his high school head coach, Bernie Ochoa, and his NVC head coach, Rogelio Ochoa. The latter, who also was the Napa High head coach from 2012 to 2018, is also Jesus III’s uncle – because their mothers are sisters – and godfather.

“In high school, I beat him every time,” Jesus III said of Rogelio’s Grizzlies. “The year after I graduated, they went undefeated until their last playoff game.”

Ochoa hasn’t met his next head coach yet, but said he spoke with Moore in December.

“The way that he talked to me and about the program, it felt like I was wanted there,” he said. “My friend at Jefferson told me that while he was playing for IU East, the coach would ask him about me like every other day. That just made me want to go there even more. (Moore) wrote back after watching one game on film, saying he wanted to see me there for the next few years. I told him that I could play anywhere down the middle – center back, midfield, forward – I just want to go and help the team win. He plans on playing me somewhere in the middle.”

“We had players from the 2017 squad who won the overall championship and we had players from 2018 who were mad about being co-champs,” Ochoa said. “When you add all those together, you go 8-1-1 in conference.”

Ochoa said he’s close to finishing his Associate of Arts degree in viticulture and plans to major in business with an emphasis in entrepreneurship.

“I talked to the winemaker at the winery I’m working at and he told me he didn’t start studying wine until he was 26 and got a degree in horticulture,” Ochoa said. “He talked to me about the business side of it and said the business program in Indiana is one of the best programs over there. Hopefully I can come back to the Napa Valley and I run a winery.”

By the end of his soccer career, Ochoa will have played the sport for 17 years and doesn’t expect to have any regrets.

“With all my injuries, I knew that soccer was going to end one day, but a degree is going to stay under my name for life,” he said. “I slacked off after high school and didn’t know what my purpose in life was because I just thought about soccer. But this spring I got a 4.0 GPA and the semester before that I had a 4.0. I’ve really changed as a student and I’m starting to love school. I’m not just a soccer guy anymore.”

He said his cousin-uncle-godfather-coach helped put him on the right track.

“Rogelio believed in me, not just on the field but as a human being, and that really motivated me to become a better person on the field and off the field,” he said. “It’s awesome when you have a coach that believes in you and gives you the full confidence in the world, no matter who you’re playing against. He told me to enjoy the process. He was the first one in my in my family to receive a degree, and his sister graduated from UC Berkeley and his little brother just graduated from UC Davis.”

Ochoa had six goals in BVC play, scoring against all five conference opponents – most on free kicks and other long-range shots.

“After five or six games, I noticed he wasn’t scoring on free kicks like he always had,” Coach Ochoa said. “I asked him ‘Hey, when are you going to start scoring on those free kicks?’ and then he started scoring on them.

“He had a lot of success early on in his career, but at one point he lost sight of the academic side. But he turned it around. He had a lot of injuries and academic hardships, but he’s definitely matured. He’s a different person than he was two or three years ago. He was very resilient and now he takes care of himself a lot more.”

This will be Ochoa’s first taste of fall, winter and spring in the Midwest.

“My dad told me ‘when it gets the low 70s here, you’re wearing sweatpants. Now you’re gonna go to Indiana, where they have real winters?’ But I’m looking forward to it. It’s a regional campus of Indiana University, I get a chance to get a Big Ten (Conference) degree at a really, really affordable price.”

While sheltering in place during the COVID-19 pandemic, Ochoa said he’s been running around the property at his family’s Yountville home and doing drills suggested by the IU East staff.

“I’ve been doing basic soccer drills with my little brother (David) and just trying to deal with the situation we’re living in right now,” he said. “It’s pretty scary stuff.”

He thanks NVC athletic trainers Brandon Lucas and Traci Oyama and equipment manager Mike Ronald for their help during his rehabilitation.

“They were always willing to help me, just really nice people who always had my back,” he said. “I also thank all the coaches I’ve had here who taught me a lot of stuff that I’m that I’m gonna take to Indiana.”