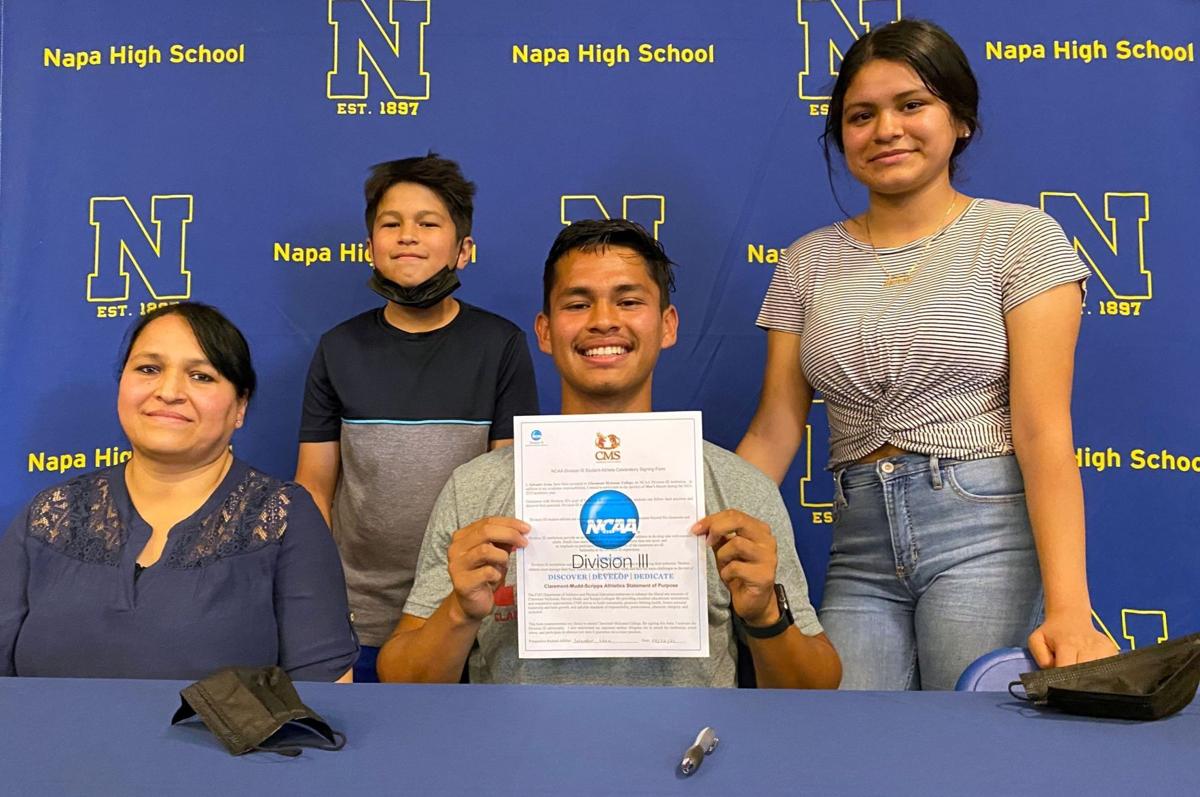 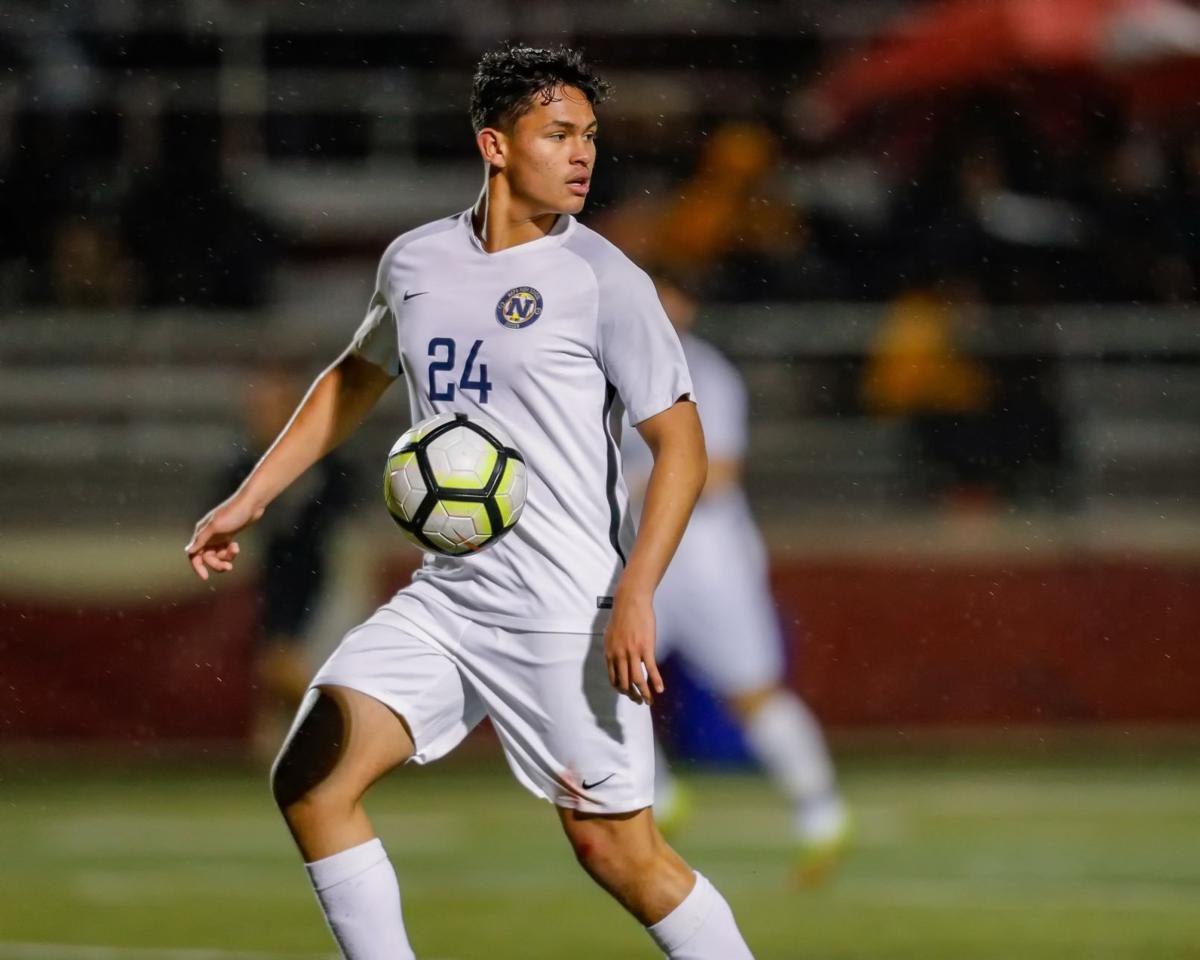 Napa High's Salvador Leon gets the ball and looks to pass during a Big Game against Vintage on Jan. 16, 2020 during his junior season, when the center back was named Vine Valley Athletic League Boys Soccer Player of the Year.

Napa High senior Salvador Leon, seated, poses with his teammates on June 11 after signing a letter of intent to continue his soccer career at Claremont McKenna College.

Two years after thinking he’d been cut from the Napa High junior varsity boys soccer team, Salvador “Chava” Leon was named Most Valuable Player of the Vine Valley Athletic League for the 2019-2020 season.

This season, because of COVID-19, started five months late and didn’t have a preseason or postseason. But Leon had set his sights on playing for a four-year college long before the pandemic. They didn’t waiver, even when the center back visited Claremont McKenna College in April about playing NCAA Division III soccer for Claremont-Mudd-Scripps — a team with athletes from three Claremont colleges — and hardly anybody was on campus.

But he liked what he saw and who he met during his visit to the school near Pasadena, which was ranked No. 6 liberal arts college in the country by U.S. News & World Report and the Wall Street Journal in 2021 and 2020, respectively.

On May 26 in the Napa High theater, Leon signed a letter of intent to play for CMC and its new head coach, Ryan Fahey.

“The coach is a very chill dude and we talked about the expectations he set for the team and myself and they were clear: you’ve just got to play well and you’ve got to grind through the process,” Leon said after the ceremony. “They mainly want us to focus on our work in the classroom and that’s what I really wanted, too, so that I can find a good career and play soccer.

"There’s going to be people from everywhere (in the country), so it’s going to really be something when I get there. I’m excited to see what we can do.”

Leon, who carries about a 4.3 GPA, thought he was done with soccer as recently as the seventh and eighth grade, when he took a break from the game.

“I was on a Napa United team (in the sixth grade), but I got injured and I wasn’t getting the playing time I wanted, so I didn’t continue. Then I stopping playing for two years — completely. Like, I didn’t touch the ball or anything,” he recalled. “I just studied.”

When he started his freshman year at Napa High, even as rusty as he was, he thought he’d have no problem making the Napa High junior varsity team.

“I tried out for the team here and, I think on the last day, I got cut,” he recalled. “I was like, ‘What?’ But then like two days later, they said there was an error and that I was on the team. My parents hadn’t liked that I stopped playing, but it didn’t matter once I started playing again. They were happy.”

Playing one of the most important defensive positions, Leon scored only about 8 goals during his Napa High career — most on set plays. But he once converted a penalty kick, something a forward or midfielder usually gets to attempt.

“I like not allowing the other team to score on us because it means we’re doing our jobs as defenders,” he said. “I faced a lot of fast guys during my four years here. That was a problem that I had to adjust to, and I’m still trying to adjust, trying to improve, get faster and read the game more.”

Leon said he studies up on opposing key players.

“I try to find film on the team we’re facing to see how they played — like if they like to stay back or if they like to attack — and once I get all that knowledge I try to spread it to my teammates so they know what we’re going to face. I played forward when I was smaller, so I know how they’re thinking.”

Though the vote of the VVAL’s other coaches last year to name him MVP was unanimous, according to Napa High head coach Rafael Ayala, Leon couldn’t believe it.

“I was so surprised when Rafa told me that I got MVP,” he recalled. “I was like, ‘Are you sure it was me?’ I thought it would be an offensive player. That’s who they mainly go for. When I heard my name I thought ‘That’s crazy.’ I wasn’t expecting that at all.”

Even though his GPA was well above 4.0 that year, Leon said it took some convincing from Ayala — who was a counselor at Napa High at the time and has since been transferred to Redwood Middle School — that he could hack college.

“I thought once I got MVP maybe I should shoot for a collegiate career, but I didn’t know anything about the process or anything, or about the schools down south or out of state," he said. "I was planning to go to the JC (Napa Valley College) and work. But Rafa would always talk to me about it and it just got me more interested and I think also the opportunity to play soccer made me want to go to a four-year college even more.

“My parents (Salvador Leon Sr. and Rosa Moreno) weren’t really sure about the idea of me going to college far away. Once I told my mom about Claremont McKenna, she was like ‘What? That’s a little too far.’ I just told her about the opportunity to play soccer and she got convinced by that.”

Ayala said he sat down assistant coaches Raul Gallegos, Isidro Nunes, Braulio Nunes, Israel Torres and Jason Martinez when he took the helm in 2018 and told them “That’s great if we win, but my main thing is to help these kids get seen by the Bay Area and transition to the next step — college.

“He’s too much of an intellectual to be a coach,” he said. “He’s just smart. He’s a processor, and he knows how to analyze the field. When we tied St. Ignatius here, their coach said of Chava, ‘Who’s that back? Can we steal him for the tournament we’re going to in Florida?’ He was just a presence. The American Canyon coach, Antonio Orozco, said Chava was the one factor why they couldn’t do anything against us. Every single coach acknowledges his talents.

“Life was really, really complicated for everyone this year, and for Chava to be recruited, get accepted to this awesome college and get to play soccer there is great. He’s a sweet kid. I could give him $100 and if I saw him in two years he’d say, 'Here’s that $100 back.’ He’s just a wonderful human being and wherever he goes, that college, that community, is getting a very good heart, a good soul.”

Napa's Olivia "Ollie" McDonald just graduated from Northfield Mount Herman School in Massachusetts, where she was part of one of the best high school rowing programs in the country, and signed with the NCAA Division I school Bucknell University.

Texas, Oklahoma officially notify Big 12 they will be leaving conference

Just call it Texit – with some Sooner separation for good measure.

John Clay: Can the SEC really afford to say no to Texas and Oklahoma?

Will the SEC hand over the pass key to the vault?

By the end of business Monday, Texas and Oklahoma could officially be headed out of the Big 12, putting the conference on life support.

Way back in the early 1990s, Desmond Howard dazzled with his playmaking as a receiver and return specialist at Michigan.

A clear explanation of NFTs and their potential impact on sports

When Evan Mobley declared for the NBA draft in April, he didn't go the traditional route.

Napa High's Salvador Leon gets the ball and looks to pass during a Big Game against Vintage on Jan. 16, 2020 during his junior season, when the center back was named Vine Valley Athletic League Boys Soccer Player of the Year.

Napa High senior Salvador Leon, seated, poses with his teammates on June 11 after signing a letter of intent to continue his soccer career at Claremont McKenna College.