Rowing: McDonald to be a Division I coxswain for Bucknell
Share this
{{featured_button_text}}
1 of 2 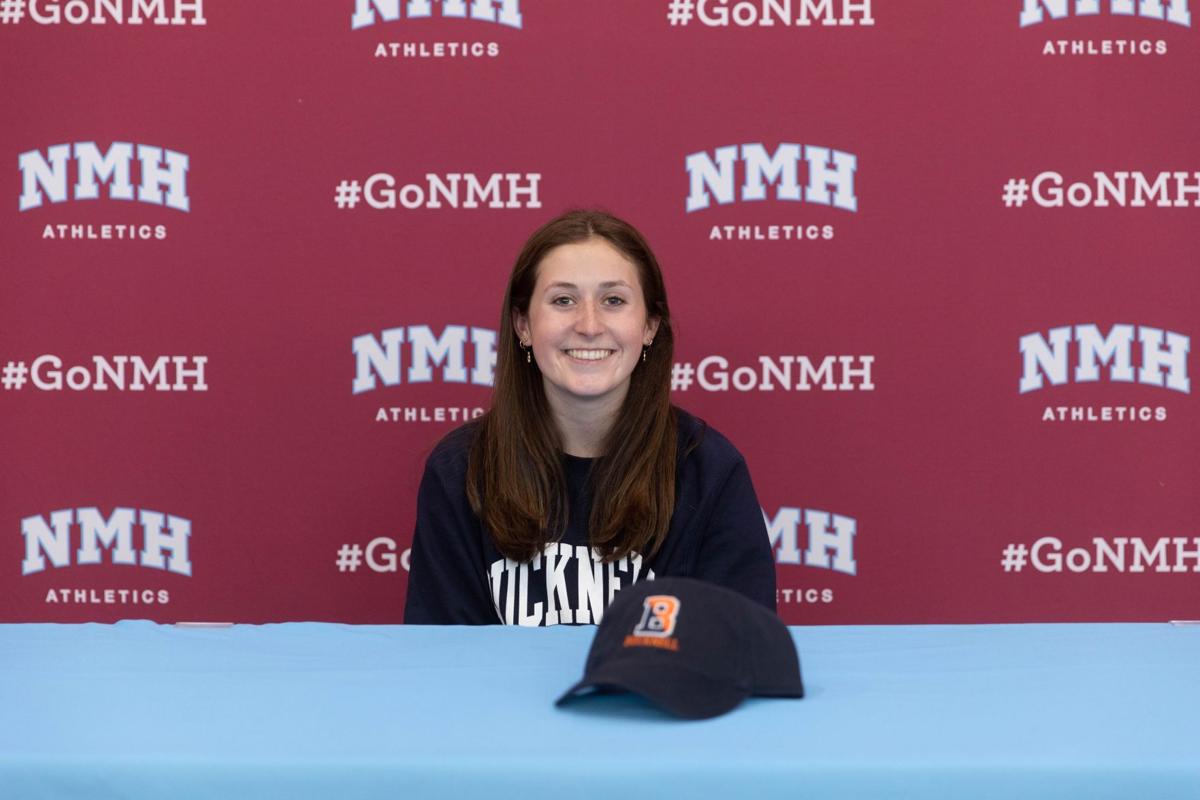 Former Blue Oak School student Olivia "Ollie" McDonald, a coxswain for the high school rowing team at Northfield Mount Herman School in Massachusetts the last four years, poses with a cap from the Division I program at Bucknell University after she signed with the Bison this spring.

Napa's Olivia McDonald is training this summer on Boathouse Row, along the Schuylkill River in Philadelphia.

One would think being a coxswain at one of the top high school rowing schools in the country, Olivia “Ollie” McDonald could have casually steered into the next port of her choice.

But because of the way the COVID-19 pandemic turned the recruiting process into a battle for survival, McDonald had to believe in herself more than ever and go get what she’d worked toward for four years.

The daughter of Napa’s Kat and Rob McDonald had to know what she really wanted in a college, and it wasn’t just a strong rowing program.

“It took a long time in the recruiting process for me to figure out exactly what I wanted,” she recalled-. I had early offers and felt bad telling coaches I am not ready to make a decision yet. I had to do that for months. I felt really bad for the next athlete on the list that would have appreciated that offer. It was challenging given the limitations of the pandemic.

“As hard as it is, you can’t let your sport be the main driver of your college choice — especially in a sport that does not have the option of going pro. Recruiting was challenging. We didn’t have the all-important spring season of my junior year to show off our skills. The fall season of our senior year was also a bit strange — no big regattas, lots of restrictions.”

There was no red-carpet treatment when she’d visit a school.

“It was hard doing the recruiting process with official visits on Zoom, or FaceTiming the coach while you walk around the campus and boathouse when no one is there. Some schools would not let us visit at all. It is hard to know if you are meant to be there if you can’t feel and smell the place. It is challenging to imagine yourself a member of a team without standing amongst the team.”

Then she discovered Bucknell University of Lewisburg, Pa., one of the least known Division I colleges in the country because of its mere 3,600-student enrollment — and a perfect fit for the former student of tiny K-8 Blue Oak School in Napa.

“Bucknell hit all the right notes,” McDonald said. “It was D-I, with all of the benefits and resources that designation entails, but it was the size of most D-III’s. Academically, the school is well regarded. I am interested in some cross-discipline approaches to environmental science (as a major), with a possible engineering emphasis, and Bucknell can make that happen.”

After competing on the longest river in New England, the Connecticut, she’ll call the longest stream on the East Coast, the Susquehanna, home for the next four years.

“It is a team of hardworking, smart women,” McDonald said of the Bison. “Many of the team are scholar-athletes and academic All-Americans.”

Bucknell finished second to Navy at the Patriot League Championships in May on the Cooper River in Camden, N.J. But McDonald doesn’t like finishing second to anybody, even to athletes who will probably make a career of being on the water.

“Second in the Patriot League is fine, but I think they have the talent to go much further,” she said. “It isn’t just having the right people, but putting them together in just the right way, that makes the difference between being good and being a great team. It is a team on the ascent that feels it has something to prove.

“That is my sweet spot. I love being the underdog. I am that cox that, if given the second (seeded) boat, I manage to find a way to beat the first boat. On paper the first boat should win, but time and time again I have managed to squeak out a win against ‘better boats.’ It could be something as small as getting us in just the right position so that when the first boat makes a minor mistake or someone catches a crab, I capitalize on it.”

She didn’t mean catching a crab literally. In rowing, it’s when the oar gets caught in the water and the handle flies back and threatens to catch the unaware rower in the chest and eject them.

Like a jockey in horse racing, the coxswain — which rhymes with “locks in” — needs to be as light as possible. McDonald doesn’t row, but she’s responsible for steering the boat and needs to be loud so she can shout instructions to the rowers in order to execute the race plan.

“When I started out in the sport, I was told that getting recruited as a coxswain is really hard,” she said. “Most teams only need a handful and there is only one cox on each boat, but four or eight rowers. Teams will also have one cox for several different boats and events, which is something a rower usually can’t do. The journey for coxswain recruiting is challenging, there are just not that many spots to be filled.”

To help earn that spot, she is spending her summer in Philadelphia coxing for the Vesper Boat Club’s under-23 team. The club competed this past weekend on the Schuylkill River in the 140-year-old Independence Day Regatta, and will compete in the U.S. Rowing Summer National Championships July 13-18 on the Cooper in Camden.

“Vesper has a long and celebrated history and is considered one of the best rowing clubs in the world,” McDonald explained. “It was founded in 1865 with the stated goal of producing Olympic champions, which they have done numerous times in the last 150-plus years. It is also the first men’s rowing club to organize a women’s rowing team, starting in 1970. I rather like that part.

“Vesper is a member of Schuylkill Navy, an association of amateur rowing clubs in Philadelphia that is the oldest sports-governing body in the U.S. I get up every morning and go down to our boathouse on Boathouse Row and appreciate the history of U.S. rowing that I get to experience.”

“The rowers also have to get in weight training, other exercise, and running besides those practices. Often the cox will lead the off-water workouts with input from coaches. I am coxing men’s boats and women’s boats. I have had limited experience coxing men, so this is a great opportunity. I am also living in an old monastery that is managed by Vesper, so everyone I am living with is a rower. We eat, sleep and dream crew. Despite the hard work, it is incredibly fun.”

Ollie isn’t the only McDonald child who has attended high school and college back East. Her brother, Max, is a competitive skier and was expected to graduate in May from St. Olaf College in Northfield, Minnesota after spending grades 9-12 at Brewster Academy in Wolfeboro, New Hampshire.

“He took the spring term off during the lockdown, when the weather was cold and got to him,” said Kat McDonald. “He was either in class or in his dorm room and they couldn’t leave campus. He felt like he was spiraling. He took the term off, ski raced for Australia, and ended up working at Squaw Valley. He made some good money, got some great skiing in, and got a job offer from (Squaw Valley owner) Alterra after graduation. It worked out great for him.

“He is still living in Tahoe through the summer and working for a guy installing fences. He had some other, easier job options, but he said he picked it because ‘I want my resume to show a tough, physically challenging job so future employers know I am willing to get my hands dirty and I am not afraid of hard work.’ I couldn’t argue with that.”

Former Blue Oak School student Olivia "Ollie" McDonald, a coxswain for the high school rowing team at Northfield Mount Herman School in Massachusetts the last four years, poses with a cap from the Division I program at Bucknell University after she signed with the Bison this spring.

Napa's Olivia McDonald is training this summer on Boathouse Row, along the Schuylkill River in Philadelphia.