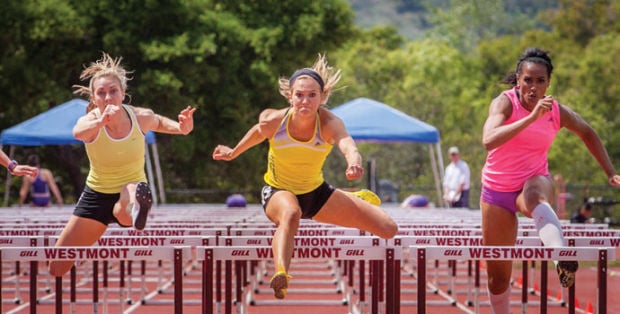 UCLA’s Tatum Souza, middle, here competing unattached against elite-level and Olympic athletes in the women’s heptathlon at the Sam Adams Invitational at Westmont College in Santa Barbara earlier this month, had a personal-record time of 13.85 in the 100-meter hurdles. Fritz Olenberger photo 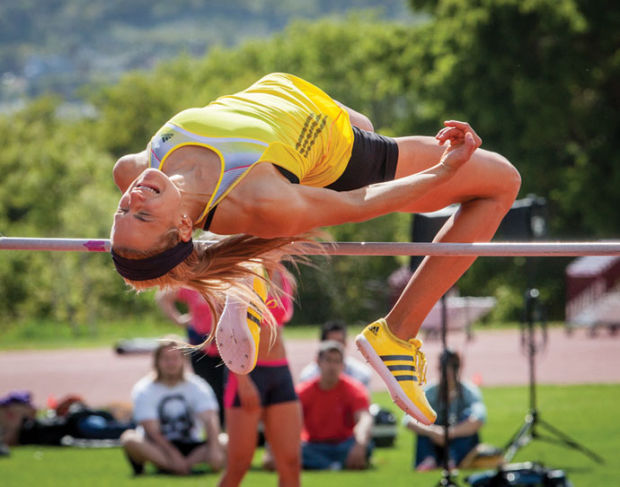 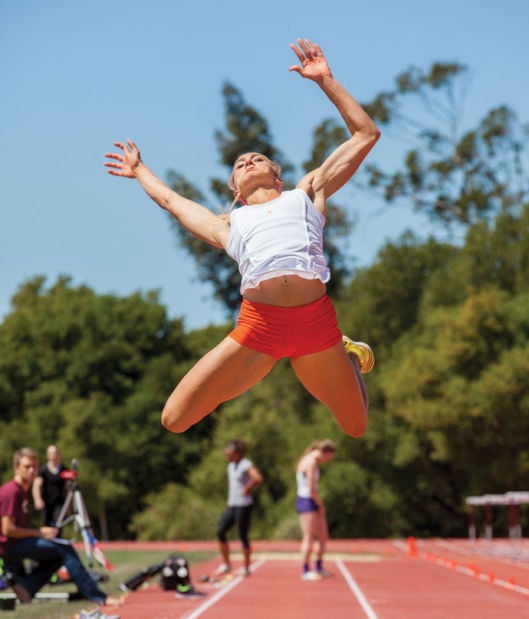 Tatum Souza is redshirting this year’s outdoor season for the UCLA women’s track and field team, which is ranked No. 14 in the country.

Souza, a 2010 Napa High School graduate and former multi-sport standout for the Indians, is a team captain, but cannot represent the Bruins in any dual meets or invitationals during the spring season.

She still trains each day with her teammates and is a member of the Bruin athletic council, a student-athlete government organization. She is also competing as an unattached athlete and already has qualified provisionally for the 2014 USA Outdoor Track & Field Championships, which will be held June 25-29 at Sacramento State’s Hornet Field.

Souza’s decision to redshirt gives her a full year to further develop and gain more experience in the heptathlon as a combined events athlete. She is No. 6 all-time with 5,691 points for UCLA in the heptathlon, which consists of seven running, jumping and throwing events over two days.

She earned second-team All-America honors in the heptathlon by finishing ninth at the NCAA Outdoor Championships last year at Hayward Field on the campus of the University of Oregon. She finished second at the Pac-12 Championships.

“It’s been harder than I thought it was going to be, because for the first time I’m not part of a team,” she said last week. “I’m running on my own. I think you have to trust the process.”

The 2013 season was her first year to train and work with Jack Hoyt, UCLA’s associate head coach, whose duties include all of the jumps and multi-events. She made significant improvements.

“I trust my coach enough, that I think ultimately, in the long run, it will be for the better,” she said from her family’s home in Napa. “I just have to keep reminding myself of that, because often times I forget and I just want to run for my team and I love being part of a team, and it’s hard watching everyone else compete for UCLA and not me.

“I’ve been training really hard. I think I needed this year to work out a lot of my kinks and try and figure some stuff out.”

Souza, who turned 22 years old on Sunday, had a very good indoor season this year for UCLA.

She won the indoor women’s pentathlon, beating out a field of 20 entrants, at the MPSF Championships at the Dempsey Indoor Facility on the University of Washington campus in Seattle.

Souza finished third in the pentathlon at the Texas A&M Aggie Invitational, which was held in the Gilliam Indoor Track Stadium in College Station. She also ran the second leg on UCLA’s seventh-place 4x400 relay team.

A senior, Souza said she is honored to be at UCLA, in a track and field program made up of elite-level athletes.

“It’s something that gives me a lot of pride and a lot to work hard for, to represent your school. You want to be participating and a strong factor in that community — that’s what I’ve been striving to do ever since I got there.”

She has had success in the outdoor season this year.

Competing against Olympic-level athletes in the women’s heptathlon at the Sam Adams Invitational at Westmont College in Santa Barbara, she had a personal-record time of 13.85 in taking fifth in the 100-meter hurdles. She was eighth in the high jump (5-6 1/2, personal record). She ran the 200 (25.04).

“There’s a lot of different aspects to the heptathlon and learning the different rhythms and technique for each individual event and not letting them overlap,” she said. “It’s definitely not easy. It’s really fun, though, because you never get bored. You definitely are always working on something.”

“I’ve had so many events where I’ve had a personal worst and then in the next event a personal best. It’s so hard to put it all together in one meet.”

In 2012, she received All-America honorable mention honors with the UCLA 4x400 relay team that placed 21st at NCAAs. She finished sixth in the heptathlon with 5,334 points at the Pac-12 meet.

At Napa High, she was a two-time Napa Valley Register Athlete of the Year, a Wendy’s High School Heisman California State finalist, and set school records in the long jump and hurdles. She qualified for the CIF State Track and Field Championships as a junior and senior.

She broke the Pacific Association heptathlon record with a total of 4,641 points and placed seventh in the heptathlon at the 2009 USATF Junior National Championships.

UCLA has honored Souza with two team awards: most inspirational her freshman year and most improved her sophomore year.

PULLMAN, Wash. — It took a little longer than expected, but Washington State seems to be rolling.

PULLMAN, Wash. — Max Borghi scored on a 2-yard run with 1:30 left in the game as Washington State came back to beat Stanford 34-31 on Saturday…

EUGENE, Ore. — Quarterback Anthony Brown shut out the noise to lead Oregon to a fourth-quarter comeback, then let the defense seal a victory o…

Ben Simmons was a media day no-show. But Joel Embiid and the Sixers still want him back: ‘I really hope he changes his mind’

UCLA’s Tatum Souza, middle, here competing unattached against elite-level and Olympic athletes in the women’s heptathlon at the Sam Adams Invitational at Westmont College in Santa Barbara earlier this month, had a personal-record time of 13.85 in the 100-meter hurdles. Fritz Olenberger photo