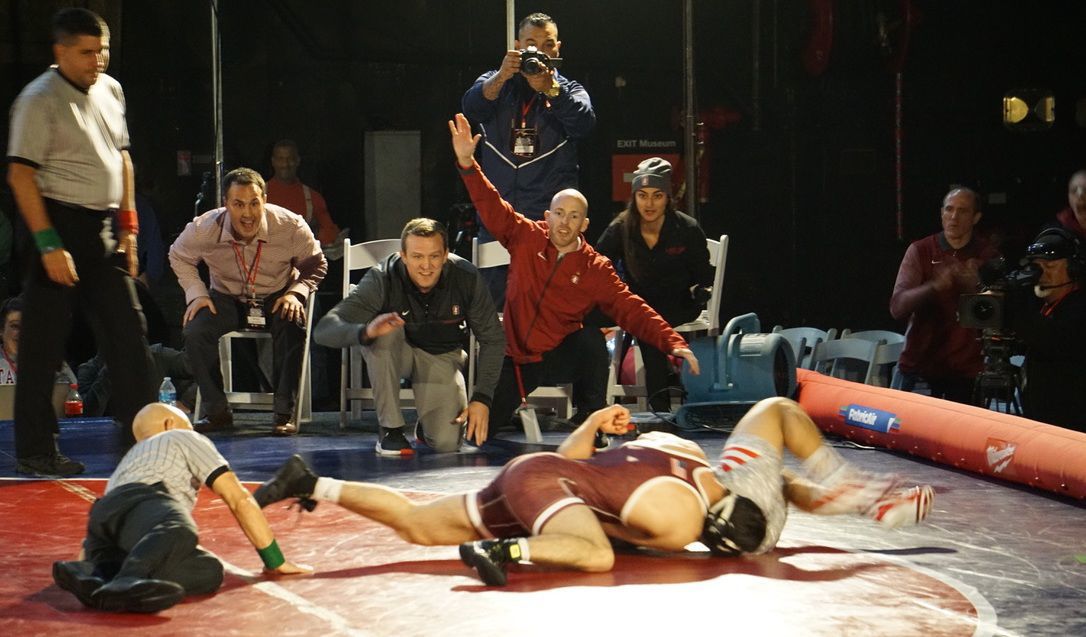 Stanford assistant coach Nate Engel gestures as his wrestler looks for a pin during the 2018 Battle on the Midway, an annual college tournament held on the aircraft carrier USS Midway in San Diego. 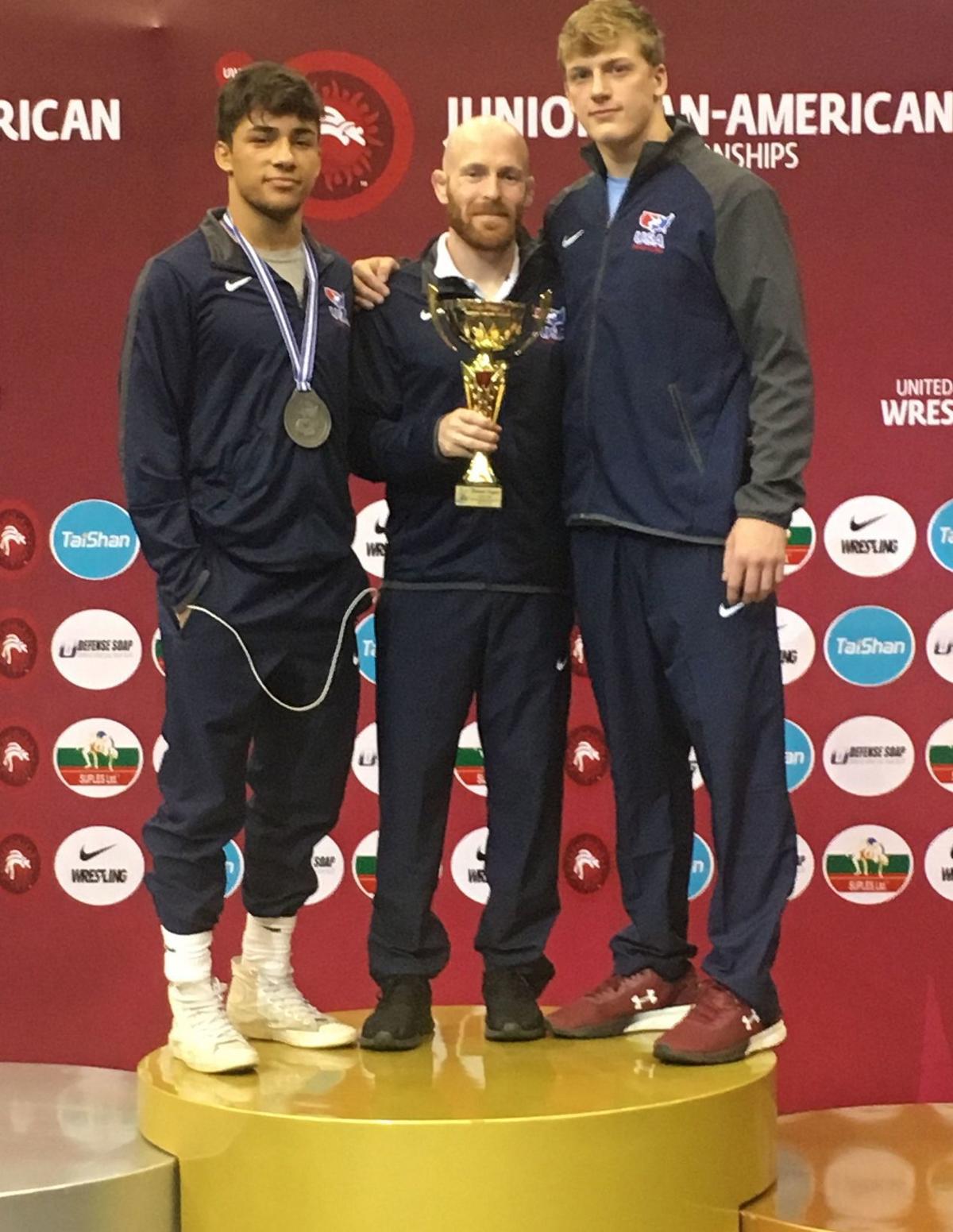 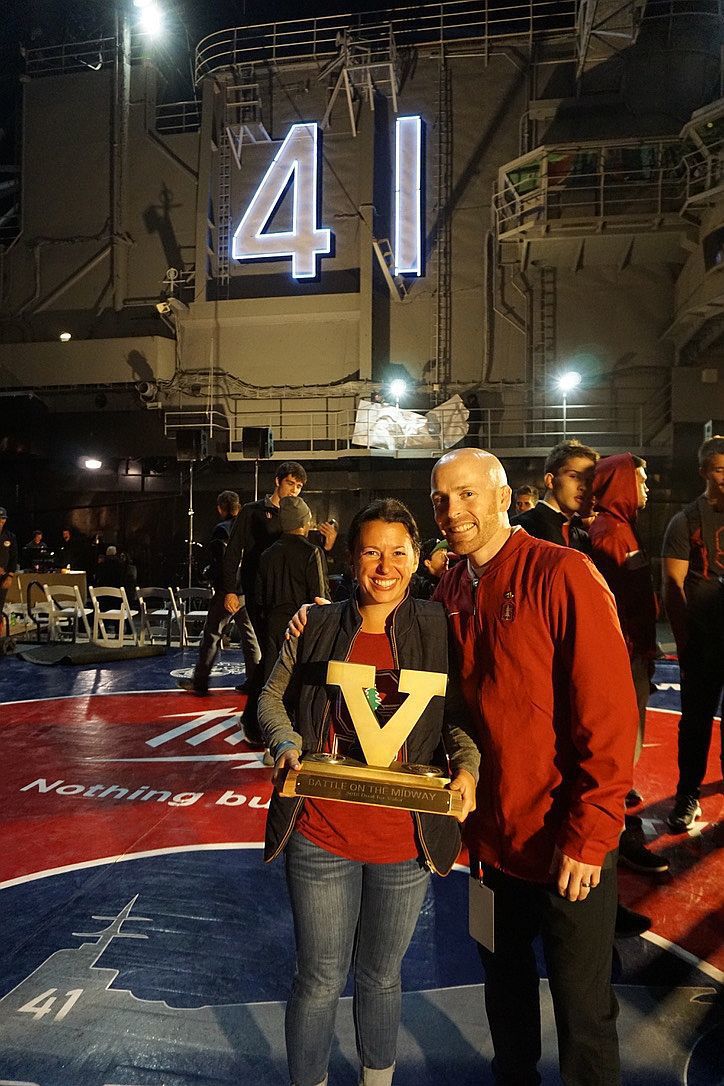 McKayla Engel holds the trophy while posing with her husband, Stanford assistant coach Nate Engel, after his team defeated Fresno State in the Battle on the Midway aboard the aircraft carrier in 2018. 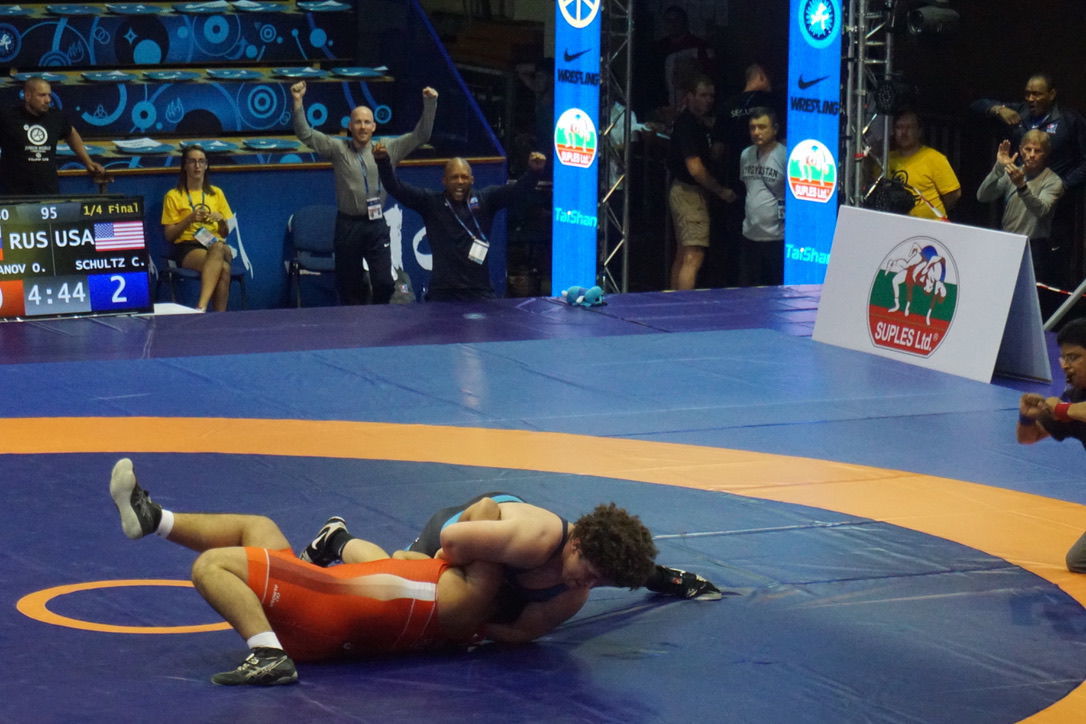 Engel qualified for a state meet all right, just not in California. Wanting to be with his mother, he moved 3,000 miles east, started over with a new program, coaching staff and practice partners at Pasco High in Dade City, Fla., and reached the Florida state meet.

“I transferred because when I was a freshman in high school, my parents got divorced and my mom moved to Florida,” Engel, who now lives in the San Jose area, recalled in late April. “I needed a change of scenery and I think it was really good because I got to re connect with my mom, since our relationship had gone bad my freshmen year. It also gave me a new coach to learn and train under and make the state finals.”

Engel moved around the country many more times during his college wrestling and coaching career before ending up back in the Bay Area in 2018. He helped Stanford University capture its first Pacific 12 Conference title in 2018-19 as a volunteer coach.

“I was coaching at the United States Naval Academy from 2014-2018 right after I got out of the Army, and Stanford had an opening to come join their staff,” he recalled. “Head coach Jason Borrelli had reached out and I brought my wife out to show her Stanford and the rest was history. It was really nice to move back to be around my dad and my little sister, Lindsay, to be able to see them more often than I had in the past.”

The 18 years in between had seen rise through the ranks as a wrestler and coach in Greco-Roman, a style in which grapplers can use only their arms and upper bodies to attack and hold only those parts of their opponents.

Engel’s ascension has culminated in him being named USA Wrestling’s 2019 Greco-Roman Coach of the Year. He is the first from California to achieve the honor, which has been presented annually since 1972.

“I am truly honored to win this award. It feels like a dream come true,” he said. “I am not sure what set me apart, but I think all the coaches I have had in my life helped mold me into the coach I am today.

“One big thing I value is my relationships and the trust the athlete puts in me, and vice versa. I make sure to show it’s a two-way street because, once they get on the mat, they know we have done things right to succeed. In general as a coach, I want to be able to work with young men and women and grow them into successful people when they graduate college or hang up their wrestling shoes. Medals and trophies are great to have, but at the end of the day a college degree is the most important thing.”

According to the USA Wrestling website, Engel was a nationally respected Greco-Roman wrestler. He started his international career training at Northern Michigan University under respected coach Ivan Ivanov, USA Wrestling’s 2009 Greco-Roman Coach of the Year.

“I learned a lot from Coach Ivan as a coach,” he said. “He was very, very technical and drilled it in our heads that you can be successful if you put the work in. Coach Ivan showed us how to become a family on and off the mat.”

Later in his career, he was a member of the U.S. Army World Class Athlete program and was a two-time National Team member in Greco-Roman.

He won the 2012 Haparanda Cup in Sweden and the 2009 Sunkist Kids International Open. He took home a silver medal from the 2013 Haavisto Tournament in Finland, and earned bronze medals at the New York AC International in 2011 and the S.A. Lavrikov Cup in Russia in 2013.

In 2013, Engel was the runner-up at the World Team Trials, was the champion at 55 kilograms in both freestyle and Greco-Roman at the Maccabiah Games – where he earned a bronze medal in 2017 – and was a University Nationals champion.

Engel held a coaching position with the U.S. Air Force Academy in 2013 and started coaching at the international level after he finished competing in 2014, guiding the 2015 Cadet World Team in Bosnia. He also served an assistant coach for the U.S. Naval Academy from 2014-18.

He regularly participates in U.S. Greco-Roman training camps for both Senior-level and age-group level athletes. He has coached a number of teams on international tours, serving on the staff of the 2015 U.S. Cadet World Greco-Roman team.

Engel also served as a coach with the 2018 U.S. Junior Greco World Team at the Junior World Championships in Trnava, Slovakia, where Andrew Berreyesa claimed silver at 82 kg and Cohlton Schultz grabbed the bronze at 130 kg.

He served as the volunteer coach for the 2019 U.S. Junior World Greco-Roman team, which made history at the Junior World Championships in Tallinn, Estonia by having three medalists in the same year – Schultz with a silver at 130 kg, and Alston Nutter and Peyton Omania with bronzes at 63 kg and 67 kg, respectively.

Engel also organized an international training camp in Finland with U.S. Junior Greco-Roman athletes in preparation for the World Championships.

He now serves as the director of the California Regional Training Center, which is affiliated with the Stanford program he helps coach, providing opportunities for both men and women in the international styles.

Visits to St. Helena take Engel back to his days under Sandler, with whom it all started.

“I learned a lot from Coach Sandler. I had known him since, I think, I was in the first or second grade,” he said. “Coach Sandler taught me to ‘dream as high as you can, and if you truly believe it and work hard enough, you can achieve it.’”

That message helped carry Engel all the way to the top of Greco-Roman wrestling as a coach.

So did his wife of five years, McKayla.

“The award truly means the world to me. A lot of hard work and passion went into it,” he said. “First and foremost, they say behind every successful man is a successful woman. If it was not for my wife and her belief in my dream, this would have never been possible.

“I learned from my father what hard work was. He instilled into me that to be successful you have to be able to put the time in, and sometimes there is no reward at the end. I just enjoy coaching more than anything, and I hope I can continue to touch lives for many years to come. Thanks to USA Wrestling for the honor as well.”

Because of the coronavirus pandemic, Engel has had no choice but to sit on those laurels by sheltering in place.

“We have been staying in contact with our athletes weekly by sending workouts that they can do at home,” he said. “Had COVID-19 not happened, we would have already had Olympic Trials, which was April 4-5, and right now we would be in Las Vegas for the Junior National Championships, taking our college athletes to try to make the world team in freestyle and Greco.”

The shutdown came right after Stanford finished second at this year’s Pac-12 Championships, and right before the NCAA Championships.

Not that Engel is complaining. It’s a chance for him to shoot for Husband of the Year, or Father of the Year.

“This is the most time my wife and I have spent together in our five years of marriage,” he said. “It has been nice to have this time together as we prepare for twin boys in September.”

Visit yhoo.it/2zSkhTS for a video about the Stanford wrestling team competing in the 2018 Battle on the Midway aboard the USS Midway aircraft carrier, which was decommissioned in 1992 and is now part of a museum in San Diego.

Stanford assistant coach Nate Engel gestures as his wrestler looks for a pin during the 2018 Battle on the Midway, an annual college tournament held on the aircraft carrier USS Midway in San Diego.

McKayla Engel holds the trophy while posing with her husband, Stanford assistant coach Nate Engel, after his team defeated Fresno State in the Battle on the Midway aboard the aircraft carrier in 2018.