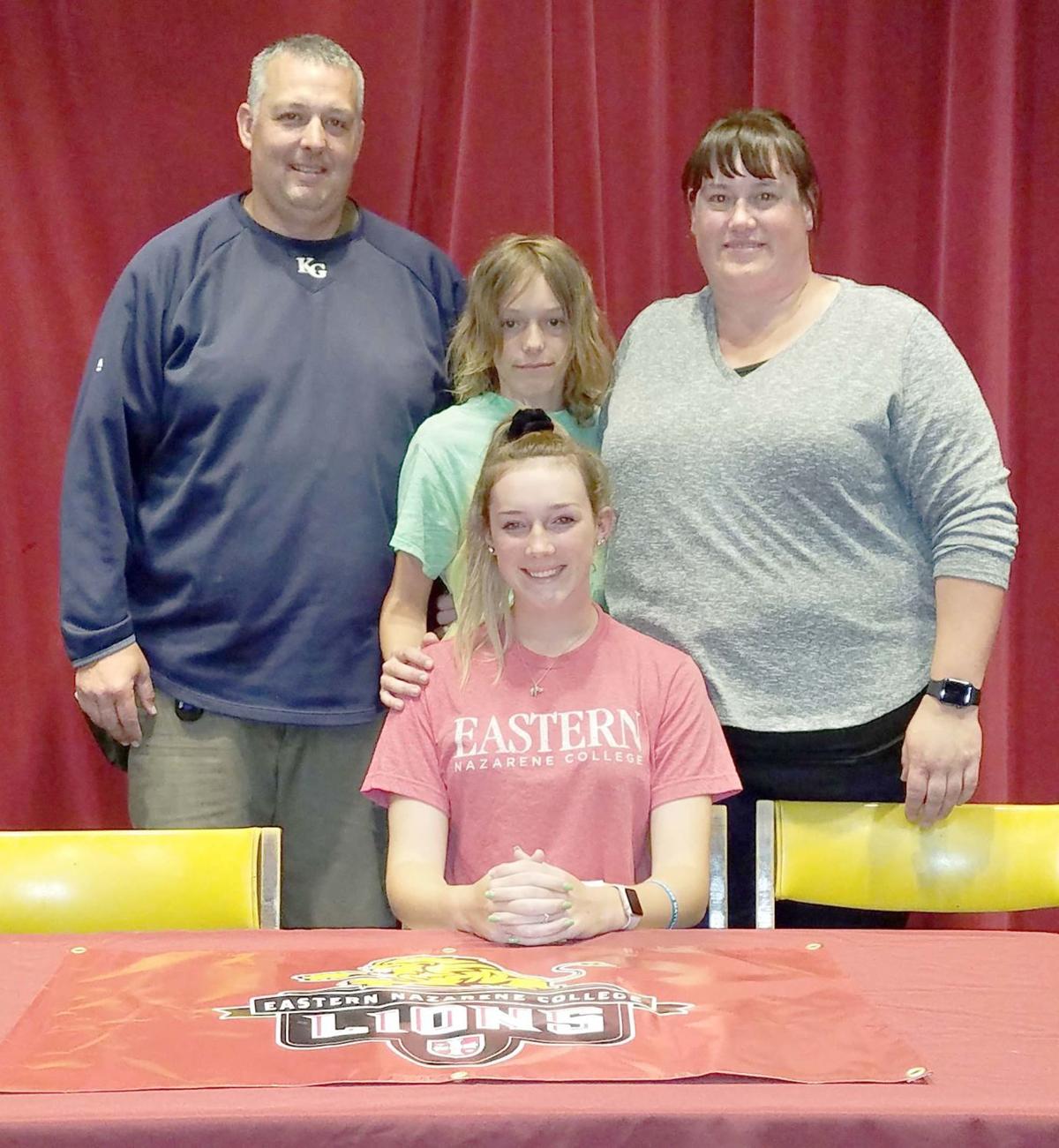 Vintage High senior Taylor Brandt poses in front of her parents and brother Boston during her signing party Wednesday in the school's theater. 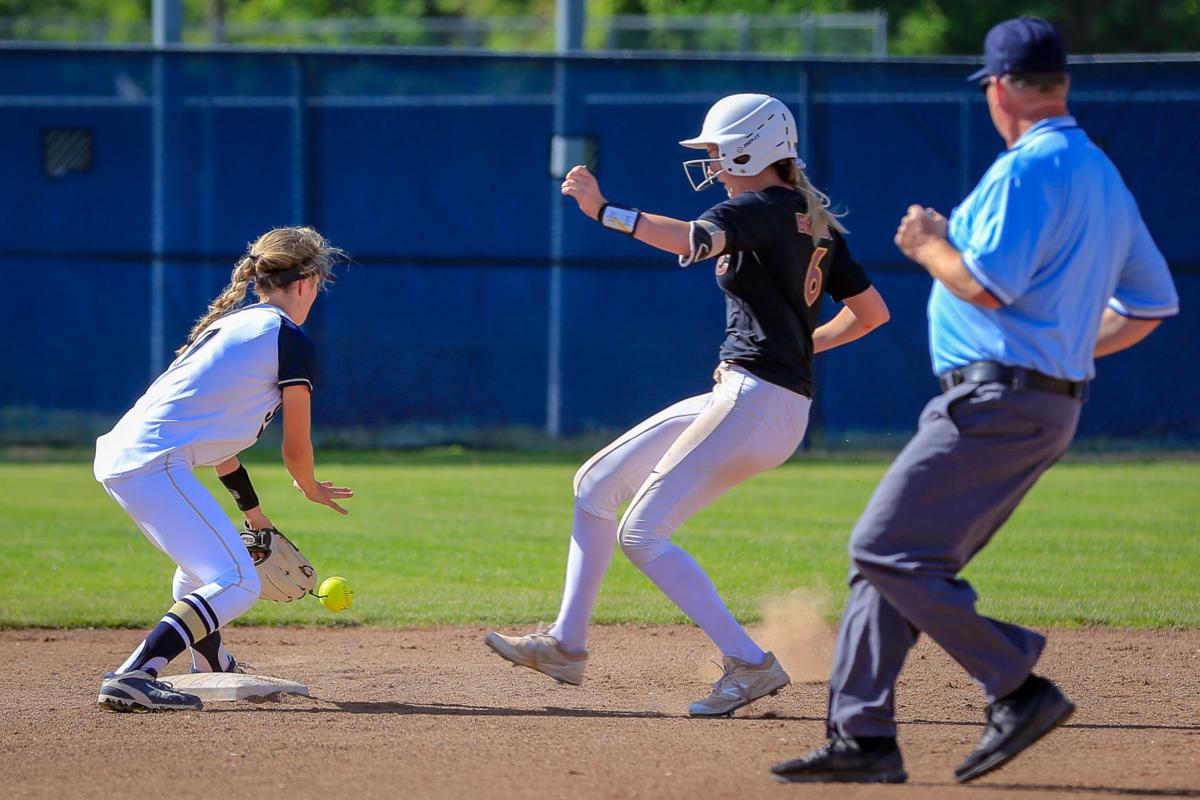 Vintage's Taylor Brandt is safe at second base as Napa High shortstop Haylee Giarritta fields the throw on April 25.

In between playing softball for her second varsity head coach at Napa High and what would be two more head coaches at Vintage, Taylor Brandt got out of Dodge.

It was to visit Eastern Nazarene College in Quincy, Massachusetts, in the Boston metropolitan area, and look into playing for the Lions’ NCAA Division III softball program.

“I thought I wasn’t going to live anywhere other than Los Angeles, and then we took our first trip to Boston and I didn’t want to leave,” Brandt recalled last Wednesday after a signing ceremony in the Vintage theater. “It was right before transferring here to Vintage that I took my first trip over there and I was like ‘Mom, just send me here for high school. I’ll finish here and stay here for college.’ I just fell in love with it.”

Finally knowing where she wanted to play in college, Brandt tore it up as a junior. She hit .619 with 12 RBIs and led the Crushers with 26 hits, six doubles, two triples, a .652 on-base percentage and a .928 slugging clip. Vintage went just 4-16 overall and 4-11 in the Monticello Empire League under first-year coach Cat Guidry, but seven of its nine underclassmen came back when Robert Poppe took the helm this season.

Poppe’s daughter Amanda was the only senior on Brandt’s first Napa High squad, so she knew of him and his ability to coach. Poppe has coached in both age groups of the Napa Valley Girls Fastpitch Association for more than a decade, and last summer became the first head coach of both champions in the same season at Kiwanis Park.

Under Poppe and his Vintage staff, the Crushers finished in a three-way tie for second place in the new Vine Valley Athletic League with an 8-4 record. They went 14-7 overall after dropping a 5-2 nailbiter at Carondelet-Concord in the first round of the North Coast Section Division 1 playoffs.

“She was also a shut-down left fielder, with numerous fly balls caught and three throw-outs at home plate from deep left field,” Poppe said in his All-County nomination form. “More importantly, she was a team leader, both vocally and by her performance on the field. I had three freshmen on the team this year, and Taylor took them under her wing and supported them, and helped build their confidence with her constant positive chatter and leadership skills.”

The 6-foot Brandt also played her third and fourth seasons of high school volleyball at Vintage, helping the Crushers finish second in the VVAL last fall.

‘Yes, she’s a California coach, which was really exciting and kind of what I was looking for,” she said. “You can’t play year-round on the East Coast, whereas in California you can. It was really important for me to have a California coach, because it’s just a different level of softball. I think you could see that in the way that they played. We have a large incoming class of freshmen and a few transfers from a JC that are coming and I know quite a few of them, so hopefully we’ll do even better next year.”

It’s only a coincidence that Chris and Crystal Brandt not only have a daughter who will be going to college in the Boston area, but also have a young son named Boston.

Boston Brandt’s name is the result of his father having been a Boston Red Sox fan since he was 12, not that he lived there.

“My best friend growing up was from Boston, so hanging out with him turned me into a huge Red Sox fan,” Chris Brandt explained. “(In 1984, Roger) Clemens was a rookie for them and so I just fell in love with Boston and it grew into naming my son that.”

Taylor began her speech at the ceremony by thanking her parents.

“I wanted to first of all say thank you to my dad for pushing me into softball because I was such a dancer-cheerleader person and he really pushed me into trying everything and taking what I wanted. I found something that I really wanted and I wouldn’t stop until I got it,” she said. “And thank you to my mom for paying for everything, because it’s not cheap traveling every weekend – airplanes once a month, at least – and going all over the place – hotels, food, rental cars, and then just to go back to Boston, because originally I did not want to leave home.

“But I’m getting to play in college with two of my really good friends (from her travel team) who are going with me and I’m actually dorming with one of them, so I’m really excited for that.”

Brandt told the audience that playing for the Cal Nuggets and Universal Fastpitch organizations made her the player she is, and that Poppe let her “be a loud and aggressive player” for the Crushers.

“I want to thank Poppe for embracing the way we are and coaching toward our strengths, and making this definitely my most memorable year of high school softball.”

Brandt plans to double-major in business administration and sports management, and to then attend law school.

“It’s kind of a sigh of relief just kind of knowing all of that work I put in for so many years wasn’t for nothing. I knew that it was going to work out, it was just kind of agonizing not knowing when.”

Brandt knows travel ball was her ticket to Eastern Nazarene College, but she’s glad she came back to high school softball at Vintage.

“You want to represent your school and do something to better your school and be proud to wear that name across your chest,” she said. “Travel ball is completely different, the level of competitiveness and just like the drive of the people that are around you. In high school everyone is different, everyone has a different motivation. Some people are just out there to have fun and that’s completely OK. That’s what high school (softball) is about, having fun and being in front of a bunch of people and them cheering for you.”

Brandt, who was Napa High’s ace as a freshman, said it was fun to help mentor Vintage freshmen such as pitchers Shelby Morse and Raimy Gamsby this season.

“I was in their position once, so it was good to be able to kind of like see it through a different lens,” she said. “Last year we had a really young, raw team. We did this year, also, but (this year) we had pitching, which is a game changer. If you have pitching, it helps everything because your defense can help you out. Our pitchers this year were outstanding this year and they’re only going to get better.”

Vintage High senior Taylor Brandt poses in front of her parents and brother Boston during her signing party Wednesday in the school's theater.

Vintage's Taylor Brandt is safe at second base as Napa High shortstop Haylee Giarritta fields the throw on April 25.