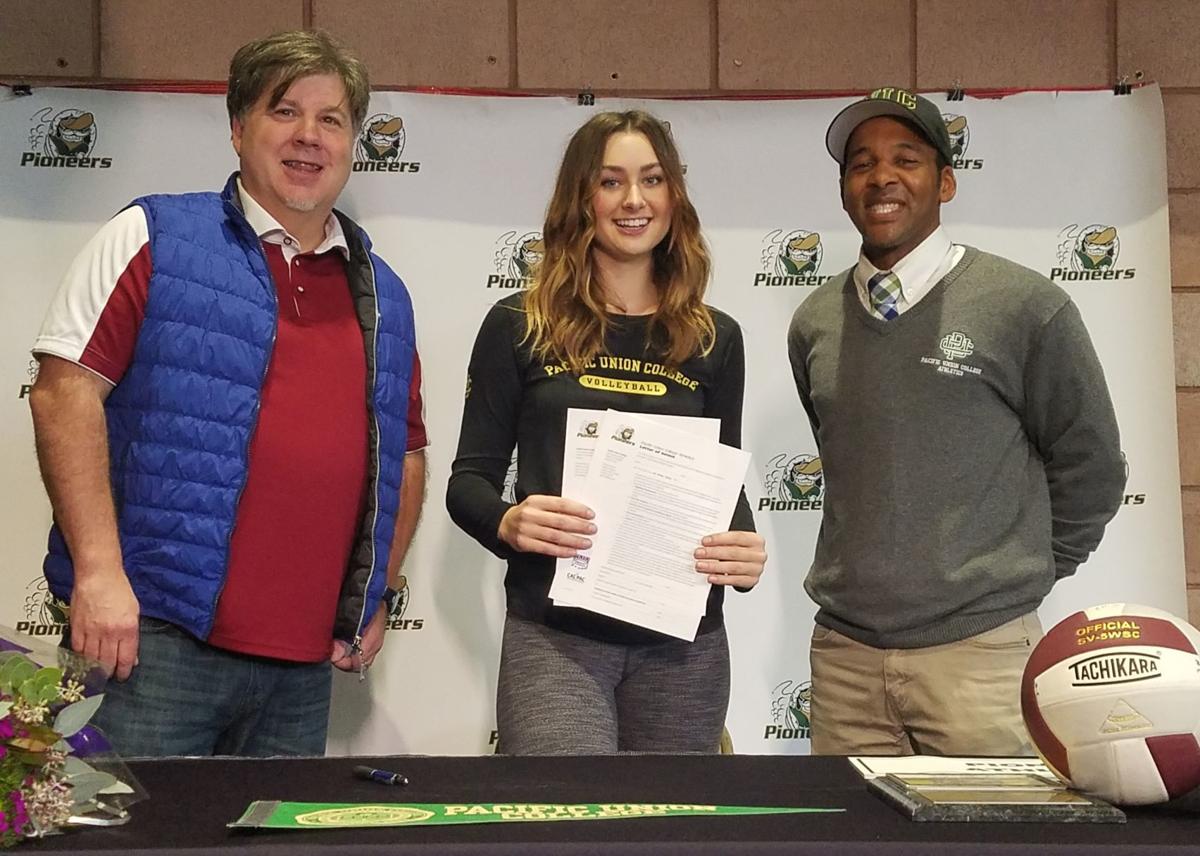 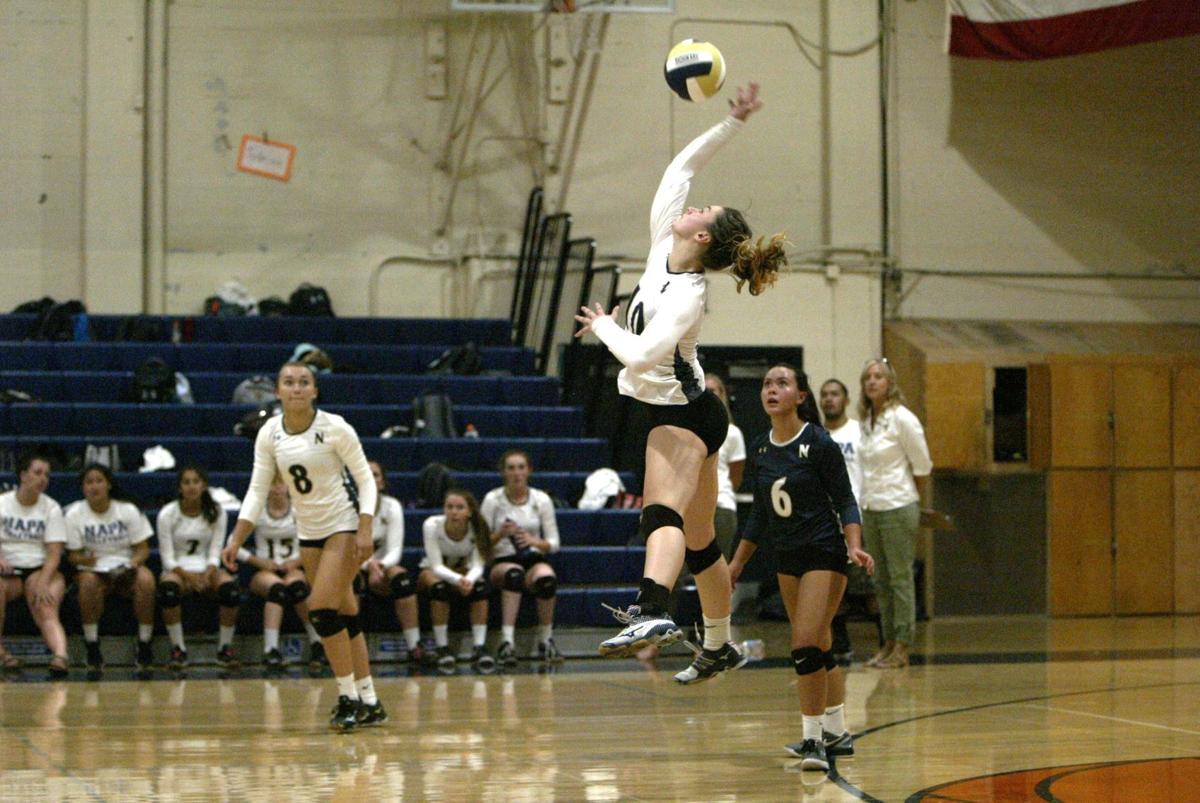 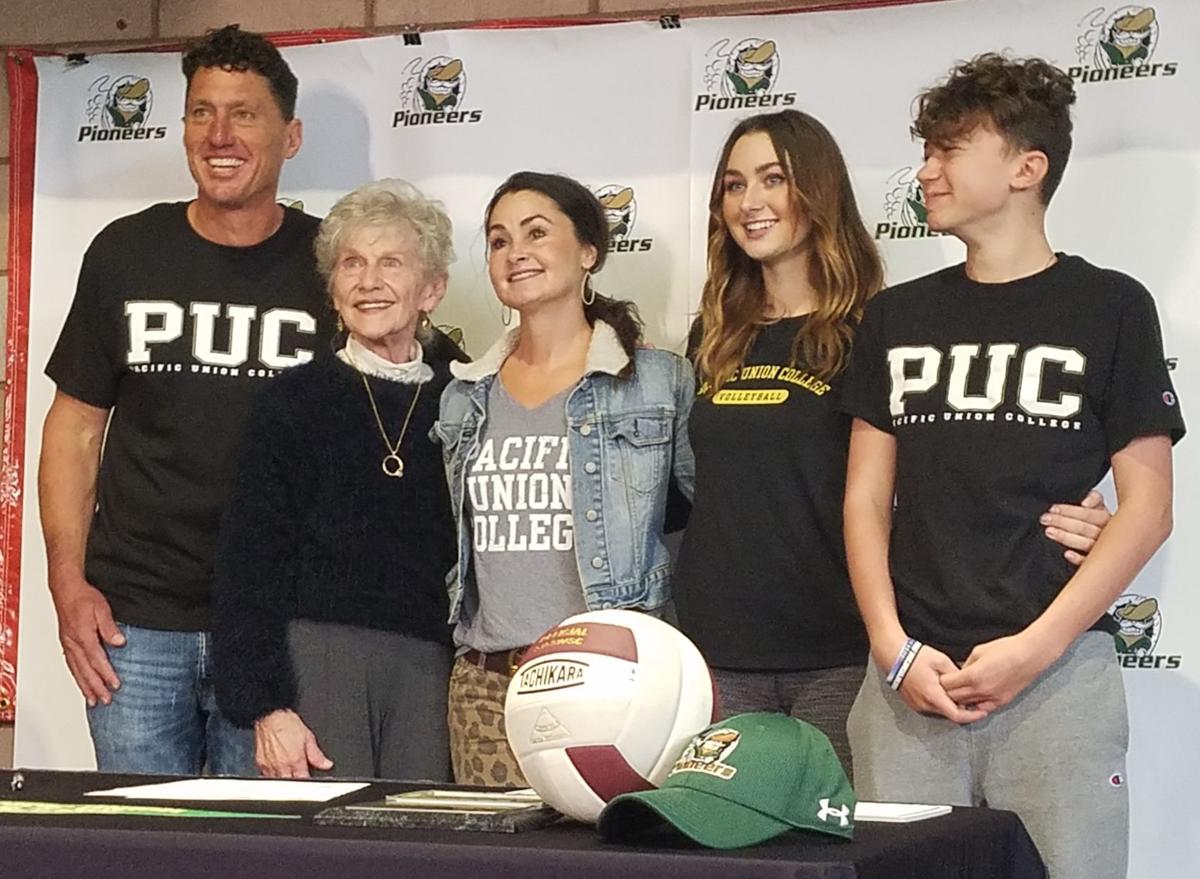 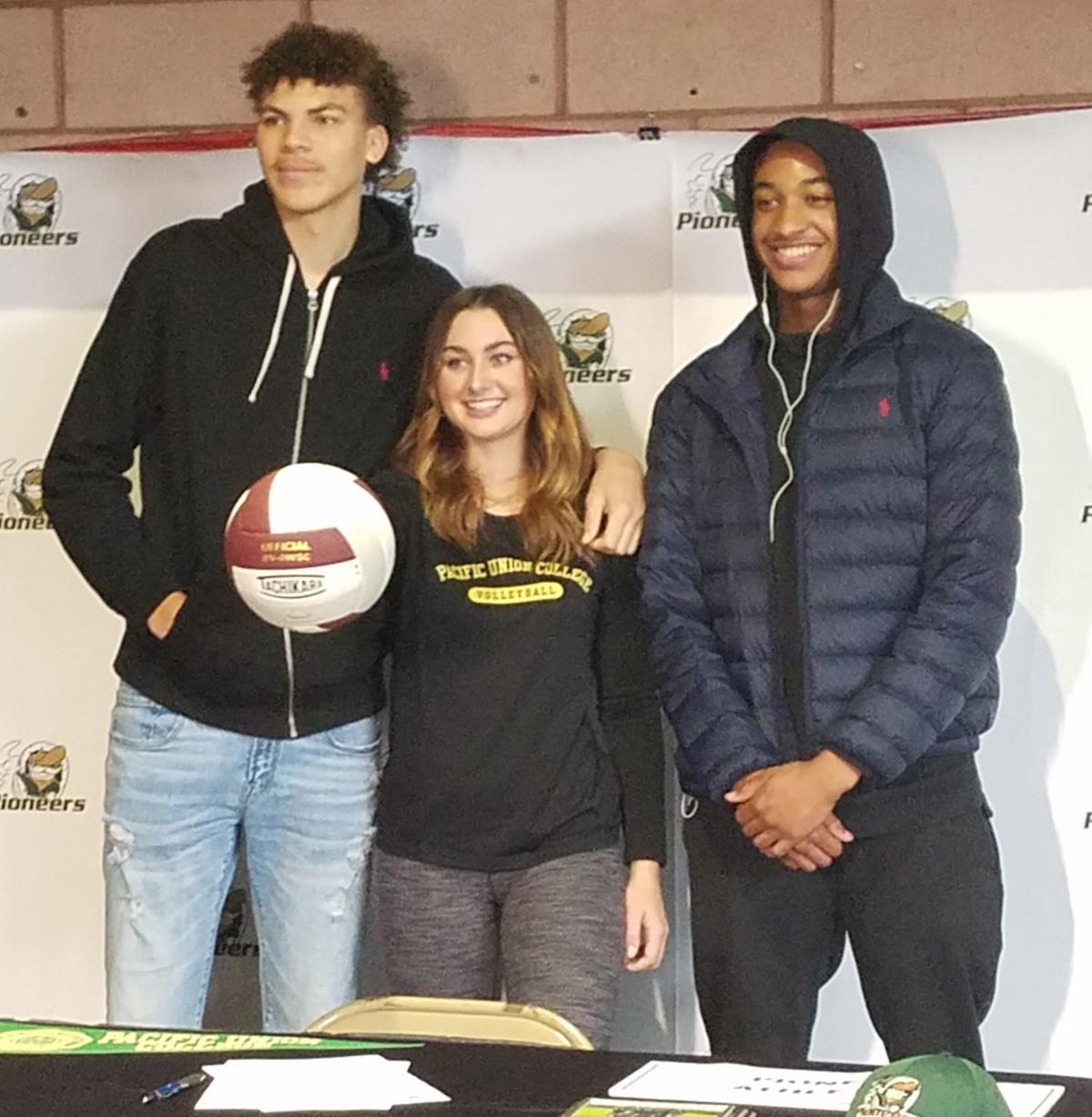 The chief of the college program an athlete is signing with doesn’t usually show up at the signing ceremony, but Richie Silie didn’t have to come far.

The new head coach of Pacific Union College volleyball had to drive only 45 minutes from the Angwin campus to see Napa Christian senior Breck Hearn sign with his Division II Pioneers on Wednesday.

Hearn has been the Knights’ top female athlete since she transferred from Napa High, a school with 15 times the enrollment, to their tiny campus on Pine Street midway through her sophomore year.

Hearn is a cousin of the athletic Bards of Napa High — Presley, who swam for the USC women’s team on a full-ride scholarship, Mackenzey, who earned a full-ride softball scholarship to San Jose State, and Cal, the 2015 Napa County Football Player of the Year who walked on as a quarterback at Cal Poly. Her parents, Todd and Julie Hearn, were sweethearts at Vintage High. Her mom, formerly Julie DeLaca, the sister of Shelley Bard and they both were softball standouts for Vintage and Napa Valley College.

“Athletics have always been in the family,” Breck Hearn said. “But my parents aren’t pushy about it. They are super positive and support anything I do.”

Breck was one of five finalists for Offensive Player of the Year on the Napa Valley Register’s All-Napa County Volleyball team in both 2017, when she started for the Napa High varsity as a sophomore, and in 2018, when Napa Christian was able to field its first volleyball team since 2014 due to the local soccer season switching from fall to winter.

Rather than let her play slip from that of the highest level of high school volleyball to the smallest, she kept doing her thing and helped the Knights win two matches in 2018 and six matches this fall.

One of the highlights’ of Napa Christian’s volleyball schedule each year is the PUC Invitational. It’s also where the college that hosts it can scout talented players such as Hearn, Lodi Academy’s Julia Fardsalehi and Monterey Bay Academy’s Ella Hoban. Silie said all three will be joining his Pioneers next fall.

“My first contact with Breck was when she made our all-tournament team and got the highest or second-highest amount of votes by the coaches,” Silie said. “Michelle Rai, our faculty athletic representative, connected well with her. Then we brought Breck out for recruitment events, where we do assessments, physical and skills, and then we work her out to see how she would fare the next level and she did well.

“One of the things that I like about Breck is she shows a lot of all-aroundness. If all you can be is a right-side hitter, and that’s all you want to do, you’re not as valuable to the program as somebody like Breck who could potentially be on the right side if need be, or a defensive specialist in the back, or an outside hitter. Her personality really helps, too. She’s a little live wire and I think she’s an influencer and a positive person and that’s a good combination.”

Pacific Union College wanted Hearn, and the feeling was mutual despite the grueling workouts Silie’s staff put her and the Pioneers through.

“I got a chance to play with them for two days,” she said. “Coach Richie had us do some conditioning and, boy, that was crazy, running up the cliffs at PUC. The practices were intense. I went to a few games and their (California Pacific Conference) is tough. But the Christian environment is very welcoming there. I was dropping my books and people were running over asking me if they could carry them for me. I was like, ‘These are these people are very cool.’”

Pacific Union went 0-17 this fall under Silie, who came from Florida only this summer is also the college’s director of athletics.

“The volleyball program is making a brand new start because we had zero returning players from the previous season and I’m a new coach here,” Silie said. “We did what we could, but our goal was not to win. It was to establish the core and the strength of the program and how we were going to run things before we could get the recruits that gave us the opportunity to win. You can’t try to put a roof on it until you have a foundation. I’m excited for that opportunity.”

For Hearn, who plans to major in health communications and become an occupational therapist, the path was the opposite of what most top high school athletes take to get exposure to colleges — going from a larger school to a smaller one.

Napa Christian volleyball coach and athletic director Darren Smith said Hearn would probably not be at his school had Prolific Prep’s elite boys basketball program not started having its players enroll there three years ago.

“She was coming to their social events — she’s outgoing, they’re outgoing,” he said. “I don’t think she would have even known our school was here if the Prolific Prep guys hadn’t because we’re real a small school tucked in the corner of Napa.

“When she came here two years ago, I had a really long talk with her about what to expect here because we were just restarting the volleyball program after two or three years where there just wasn’t the interest. I was the soccer coach and when that moved to winter, I was told to coach volleyball. It had been a while since I had done that. I told Breck ‘we’re rebuilding the program and we’re not going to be very good,’ and she said ‘That’s OK.’ Through that rebuilding process, she has been extremely positive. As captain, when the girls got discouraged she got them back up. We would talk sometimes and she’d be like ‘Do you think they’re ready for this yet?’ That first year we lost more than we won but it was a good building experience. This last year, even the games we lost we were competitive, against everybody. Breck kept focused and just played.”

Hearn said the Prolific Prep players like Texas Tech signee Nimari Burnett and Illinois signee Coleman Hawkins help her with basketball, even though she already averages about 30 points a game.

“Nimari comes in and he’s like ‘Breck, you need a left hand — if you had your left, you’d be scoring 50.’ He always has something to say, and so does Coleman, so they’re definitely motivating. I love having the Prolific Prep boys here. I know the little kids just love them. They’re my brothers and good friends.”

Though she stands just 5 feet, 7 inches, Hearn’s leaping ability allows her to make kills go down from the back row.

“If there was a hard server on the other team, I’d try to rotate her so she was in the back row because she’s the best at receiving, and she does have the ability to kill it from the back,” Smith said. “It doesn’t really put your offense at risk because then you can still have your two hitters and you’re getting kills from the back. It’s a good skill to have. People don’t expect it at first.”

“Coming in and working with the girls and them asking me for help made me feel better,” she said. “Volleyball is a big game of trust and being at this small a school, you don’t have a lot of options, so you’ve got to trust in your teammates and know they’re going to get better if you help them. You’ve got to be patient. I was able to play for fun and have small classes.

“It was always a dream to play college volleyball, but I definitely thought no colleges would notice me. When Coach Richie reached out, I thought maybe it was something I wanted to do.”

She also talked about it with Smith, a PUC alumnus.

“My coach said Adventist schools want players, too,” said Hearn, whose brother Brady is a freshman on the Napa Christian boys basketball team. “I’m happy to be with PUC because I’m really close to my family, so having them be able to come watch my games is something special, and I can come down to watch my brother play.

“I’m hoping we can get some really good players. I know Coach Richie just came in and he’s building up the program, and I can’t wait to build it with him and see where we are in four years. I think it’d be really good.”

Most Napa County athletes who sign with out-of-state colleges go to NCAA Division III schools because California has only 11 of them.

Vintage High water polo standout Sofia Leonardini signed with the University of the Pacific on Nov. 15.