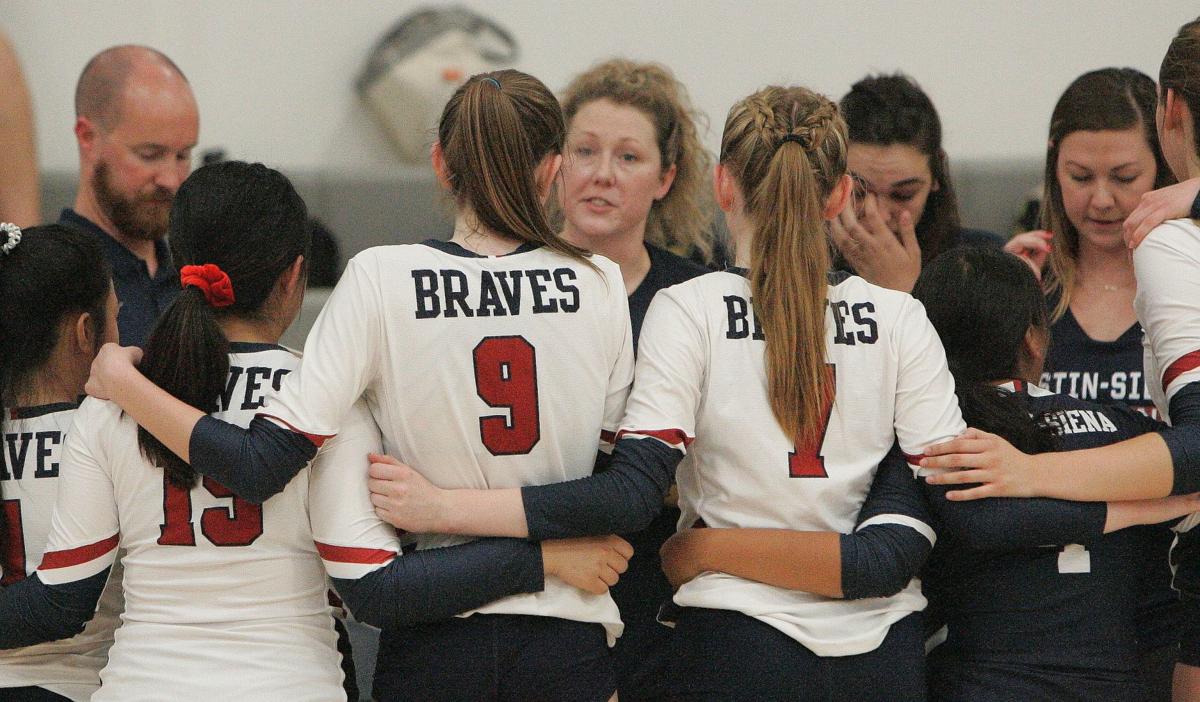 Chelsea Reilley, center, talks to her Justin-Siena volleyball team during a Sept. 24 home match against Vintage. At far left is her husband and then-assistant coach, Robert Stamps, the Director of Volleyball at Napa Valley College, where Reilley will take over as head coach this fall. At far right is her sister and then-assistant coach, Kate Reilley, who is now Justin-Siena's head coach. 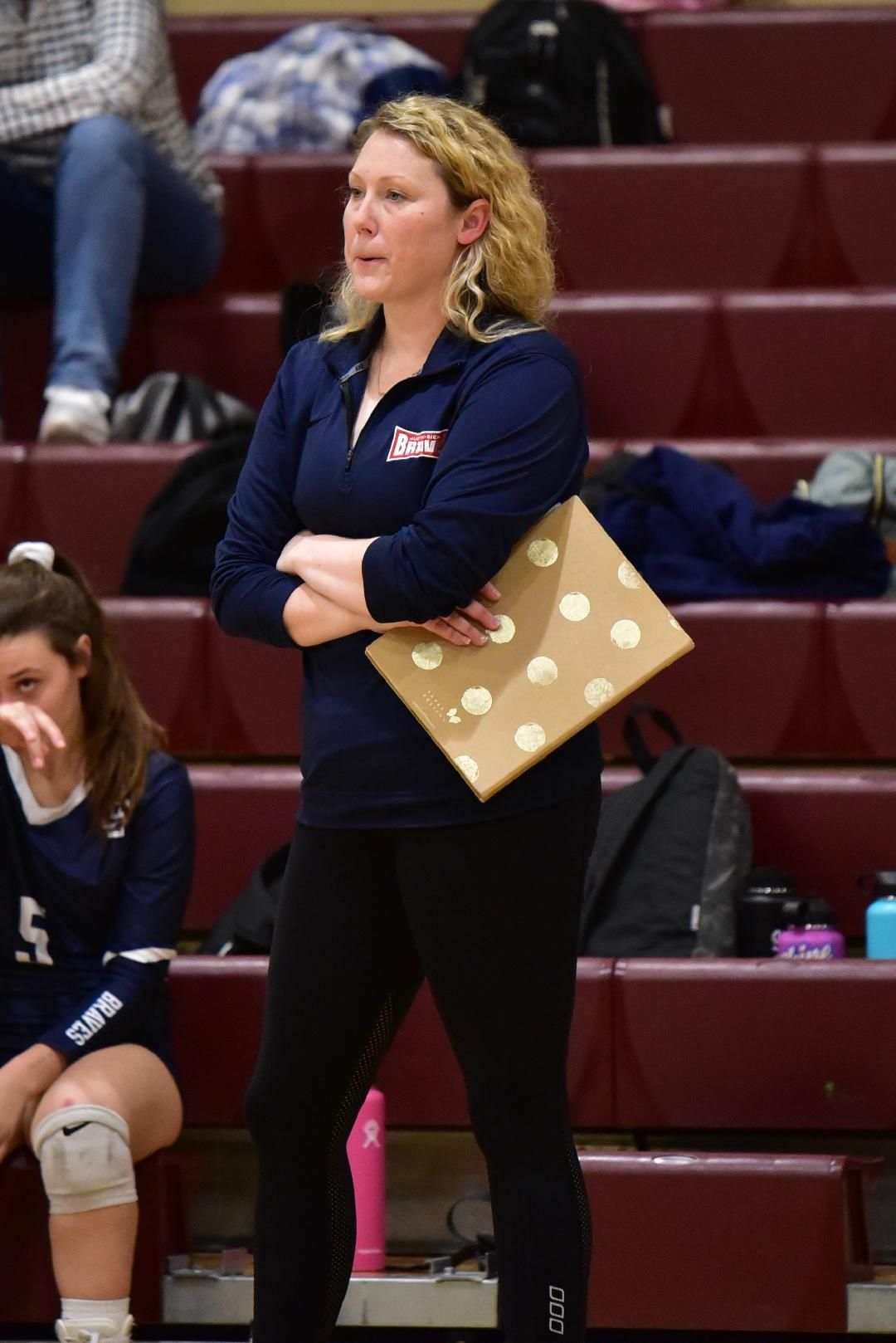 She guided the Justin-Siena volleyball program to its first league title in 18 years, saw her star player move on to her alma mater, and had plenty of talent coming back.

But after three seasons, it was time for Chelsea Reilley to move on – from a high school staff to a college one for the second time in her 17-year coaching career – to become head coach at Napa Valley College.

After seeing Julia Sangiacomo lead the Braves to the Vine Valley Athletic League title in 2018 and continue her career at Santa Clara University on a NCAA Division I scholarship, and seeing junior Megan Hanson become one of the county’s best outside hitters last fall, Reilley was ready for a new challenge. She made a similar move when she left the Los Altos High staff after serving as JV head coach in 2007 and varsity assistant in 2008, to become the assistant coach for the Santa Clara men’s club program in 2009 and 2010.

The 2004 Archbishop Mitty alumnus moved from there to the San Jose State women’s club program, serving as an assistant coach and head coach from 2011 to 2014.

She has been the assistant coach for the Sonoma State women’s club program since 2014 under head coach Robert Stamps, her husband, and they were looking to win their third straight Division II title at the National Collegiate Volleyball Federation National Championships this spring before the COVID-19 pandemic shut down the season.

“Coaching at the high school level is so fun because the players are like sponges. They absorb so much and improve greatly over the course of a season,” she said. “But at the higher level, like at Sonoma State, we are able to focus less on fundamentals and skill development and more on teaching strategy and smart volleyball, and honing the skills the players already have. It’s my favorite part of coaching at a higher level, and I’m really looking forward to it at NVC. With our Sonoma State season cut short, I am itching to get back to coaching.”

Her three Justin-Siena teams were a combined 39-33 overall. The Braves finished in a three-way tie for third place in the Marin County Athletic League with a 5-5 mark in 2017, when they had two league matches canceled due to the devastating North Bay fires. They came back to win the first VVAL crown outright with an 11-1 record in 2018, and then placed fourth at 6-6 in the VVAL last fall.

They were a combined 4-3 in the North Coast Section Division IV playoffs and 0-2 in the NorCal playoffs.

“While we are sad to see Chelsea move on, we are excited for her in her next opportunity and thank her for the leadership and success she has brought in her years as the volleyball coach,” said Justin-Siena Assistant Athletic Director Andrew Bettencourt.

Reilley takes over at NVC for Rachel Hadley, whom she said stepped down after two years to pursue a non-coaching job opportunity in Southern California. The 2013 Nevada Union graduate, who was the setter for Reilley’s and Stamps’ national champions at Sonoma State, saw her first NVC team finish 0-18 overall in 2018 and last year’s squad go 6-16 overall and 4-10 in the Bay Valley Conference.

“She did a great job in her first two seasons,” Reilley said of Hadley. “She built a solid foundation, and I’m excited to continue to build on it. We’ll look to our returners to set the example and provide some leadership, and Rachel definitely helped prepare them.”

It will be different at NVC for Stamps and his new head coach, who is not only his wife but nine years older than her predecessor.

“We’re shifting the responsibilities around a bit,” Reilley said. “I’ll be taking on a much bigger role in recruiting and some of the administrative tasks he’s been tackling. So far, it’s been extremely helpful having him around. We don’t have the brain drain you get when you take over a program and start from scratch, and I’m definitely excited we’ll be with the same team again. While he was able to help out at Justin and come to matches, there were some weeks where it felt as if I never saw him.”

“All the Napa teams have a fun rivalry and everyone is so competitive, so I think there’s already this built-in respect for one another,” she said. “We’re really excited about this year’s team. We are returning at least half of our freshmen, but spring has been so disjointed and we have yet to meet with the team.”

The Storm haven’t had a Justin-Siena player since Melissa Castellucci in 2014-15, but having a former Braves coach at the helm might change that.

“We don’t see many Justin players go to NVC, but I would be absolutely thrilled to coach any of my former players again,” she said. “I think it will be interesting to see if we get any additional students who forgo attending a four-year university due to the coronavirus, especially if they are forced to hold classes online in the fall.”

With so much in the news about sports coming back without fans, Reilley hopes they are permitted by the time college volleyball season rolls around.

“It’s an amazing thing to represent your school, and doing so in front of friends, family and fans is such an honor – and fun. So it will certainly be an adjustment if it comes to that,” she said of not being able to have spectators. “I’m cautiously optimistic we’ll return to some semblance of normal by the fall, but we’ll see. We’re taking things week to week. This situation is definitely forcing us to get creative and come up with some ideas for summer, in the event we have to socially distance for a while longer. We’ll just have to roll with the punches.”

Napa Valley College Athletic Director Jerry Dunlap said the school is excited to Reilley on board.

“To have somebody like Chelsea right there, wanting to do it, just made things a lot easier. She knows what she’s doing. We knew we were getting a quality person already. It’s kind of been seamless, just moving her in,” he said in a story at nvcstorm.com.

“We had the opportunity to watch her coach at Justin the past few years, and she did an outstanding job there. What’s really exciting, too, she has been in the (VVAL) the past few years at Justin-Siena and has a really nice rapport with local high school coaches, and has been doing an excellent job recruiting so far, this offseason, especially during these times. … That recruiting piece is a huge factor, and she’s hit the ground running.”

Kate Reilley, Justin-Siena’s assistant coach the last three years, will succeed her sister as head coach of the Braves.

NapaLearns announced a new online service offering courses that can lead to industry-recognized certifications from Adobe, Autodesk, Cisco and Google.

Chelsea Reilley, center, talks to her Justin-Siena volleyball team during a Sept. 24 home match against Vintage. At far left is her husband and then-assistant coach, Robert Stamps, the Director of Volleyball at Napa Valley College, where Reilley will take over as head coach this fall. At far right is her sister and then-assistant coach, Kate Reilley, who is now Justin-Siena's head coach.