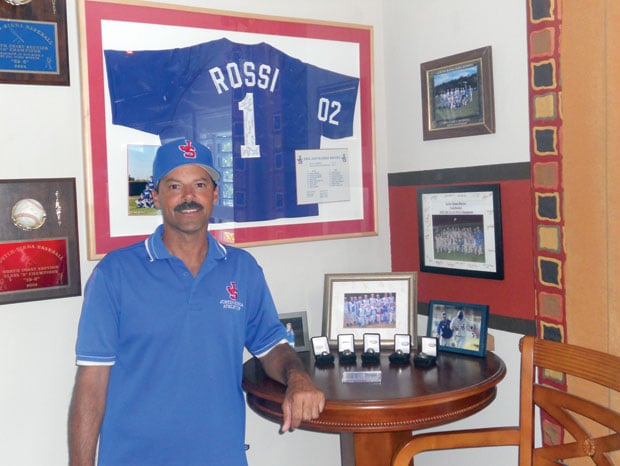 Returning Justin-Siena baseball coach Allen Rossi has compiled many memories with the Braves over the years.  Marty James/Register photos 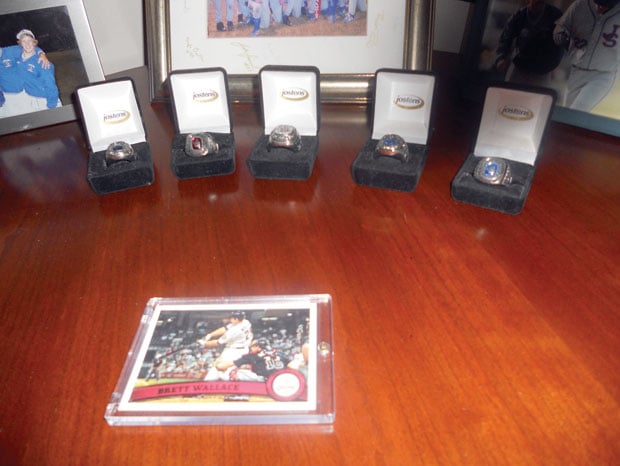 Rossi’s trophy room in his Napa home includes his championship rings with Justin-Siena, along with a baseball card of his most accomplished player — Houston Astros first baseman Brett Wallace, a 2005 Justin-Siena graduate.

There’s an upstairs room in Allen Rossi’s east Napa home that is all about baseball.

There are team photos, plaques, bats, signed baseballs and a collection of championship rings from his eight years as the head baseball coach at Justin-Siena High School.

There is even a framed uniform of Rossi’s No. 1 that was given to him as a gift by the 2002 Justin-Siena team, which won the Marin County Athletic League title and was the CIF North Coast Section runner-up. The players autographed the areas of the number and the lettering on the back of the uniform.

Rossi calls it a trophy/game room. Close by is a large TV so he can keep up with how Brett Wallace — one of the greatest players to come out of the Napa Valley — is doing as the starting first baseman for the Houston Astros.

“This reminds me of how special those years were,” he said. “I’m very proud of all of the accomplishments.”

Before accepting Justin-Siena’s job offer to return as the Braves’ coach after a five-year absence, Rossi made a call to Wallace. He wanted to get Wallace’s input and opinion on the idea of getting back in coaching.

“He thought it was a good opportunity for me to go back,” Rossi said. “He says that I have so much to offer, that if I get an opportunity, that I should go back and coach. He said he learned so much at Justin-Siena and under our coaching staff. Really, he took so much away from our program.”

Rossi has heard from a lot of people since taking over as the Braves’ new coach. They include former players, families, his golfing buddies at Napa Valley Country Club. They all want to congratulate Rossi, one of the most successful coaches in Northern California. He left Justin-Siena following the 2006 season, compiling a 172-38 overall record. He led the Braves to four CIF section titles, five league championships and a 42-game winning streak.

“I’m really overwhelmed by the support that I’ve had, now that I’m going back into coaching,” said Rossi, who takes over for Scott Wright. “The community feedback has been unbelievable the last few days. It seems like the community’s excited. I’m excited, family’s excited, so I can’t wait to get back out there and coach.”

He has heard from people who have phoned or e-mailed him. Others have expressed their best wishes to him on Facebook.

“It’s never left me, as far as my desire to coach. Really, my first love is coaching baseball,” Rossi said. “I’m just excited to go back into coaching.

“I would love to accomplish that stuff again, and that’s going to be our goal. Our goal is to win league championships and section championships — that will always be our goal. It’s never been a one-man show, it’s never been about me. It’s always been about the coaching staff, the players, the administration, the school. There’s no way I could do this by myself. It’s really a team effort. If I get the coaches in place, I feel very confident that we can accomplish big things.”

There was so much that Justin-Siena achieved under Rossi.

The Braves won two Superior California Athletic League titles and the 2000 CIF Sac-Joaquin Section Division III championship under Rossi, who was named the Small Schools State Coach of the Year by Cal-Hi Sports. He was the Coach of the Year on All-Napa County teams from 2000 to 2006.

They appeared in five straight section title games and six total under Rossi, a Napa native, who works as the assistant director of general services for the Napa County Office of Education.

He has also won at the Joe DiMaggio League level, compiling an outstanding record of 238-55 with six league titles and a state championship in 1993. The Napa Sheriff’s team that year, featuring Mike Neu, Scott Kohler, Tim Brockway, Tom Cullison and Aaron Rofkahr, was 36-1 and finished the summer season on a 28-game winning streak.

“I know the expectations are going to be very high for me coming back because of what we accomplished when I was there the first time around,” he pointed out. “I don’t think it’s fair to have those high expectations. Will I have them? Absolutely. But the group of kids that we had come through there was a special group.

“I don’t want the group that I’m going to be coaching to feel the pressure of having to win. Do we want to win? Yes. But it’s not going to be a high priority. What we will do as coaches is prepare them to be in situations during games and to be relaxed during those situations.”

Rossi remembers starting the program from scratch back in 1999. The Braves had not won a league title in 15 years and had not been to the playoffs in 12 years.

“We accomplished both of those things the first year,” he said. “If I can get the kids to buy into our program and what we’re trying to do, we will teach them the fundamentals of the game and prepare them for everything that’s going to happen in a baseball game.”

“My coaches are very good. I’ve proven that we can win and we can win section championships — we can have winning streaks,” he said. “I’m going back because I love baseball and I love coaching.

“I enjoy coaching high school baseball. I think there’s no bigger accomplishment than to watch a kid grow throughout the year and get better. I just love teaching the game of baseball — and I think I’m very good at it.”

Justin-Siena completed one of the best seasons in Napa Valley history by beating Head Royce-Oakland, 6-1, at Alberts Field in San Rafael in 2005. The victory capped a perfect 27-0 record and it was Justin-Siena’s third straight NCS title. Justin-Siena also extended its winning streak to 40 in a row. Justin-Siena finished the year ranked 18th in the state overall poll, No. 8 in Northern California and No. 1 in the state’s Division IV poll by CalHiSports.com. The San Francisco Chronicle ranked the Braves at No. 3 in the newspaper’s Bay Area poll.

He has played a lot of golf in the last few years. A member of Napa Valley Country Club, he plays 80 to 90 rounds a year and got down to a 7 index handicap last summer. But he’s fully aware that he may be playing once, maybe twice a week when the baseball season begins.

“I didn’t have baseball and it became my new obsession. It’s such a challenging sport. It’s very frustrating at times. It’s very rewarding when you do shoot a good round.”

Just three weeks ago he shot the round of his life — a 71 at NVCC. It was just one of those days, he said.

“Of course, I went out the next day and shot an 84. But that’s pretty much golf. Anybody that’s ever played it, they understand that.

“I really have met some incredible people at Napa Valley Country Club and have made new friends that have all been very supportive of me now going back into baseball.”

Rossi resigned after the 2006 season to care for his wife, Michele, who was injured July 7, 2005 in a traffic accident in Solano County as the family was heading out of town for a vacation. Michele was traveling with her daughter, Madilyn, when they were rear-ended by a big rig truck.

“It changed our lives forever,” said Rossi, adding that Michele has since had three surgeries. “We’re a strong family and we survived that. She’s had a tough road the last three, four years. Now she’s stabilized, she feels better.”

It was Michele who proposed the idea this past winter for Allen to look into coaching again.

He will check with school officials into getting No. 1, his old number, to wear for the 2012 season.

Returning Justin-Siena baseball coach Allen Rossi has compiled many memories with the Braves over the years.  Marty James/Register photos

Rossi’s trophy room in his Napa home includes his championship rings with Justin-Siena, along with a baseball card of his most accomplished player — Houston Astros first baseman Brett Wallace, a 2005 Justin-Siena graduate.