Marty James: Looking back on a day spent with Hall of Fame pitcher Tom Seaver
Share this
Return to homepage × 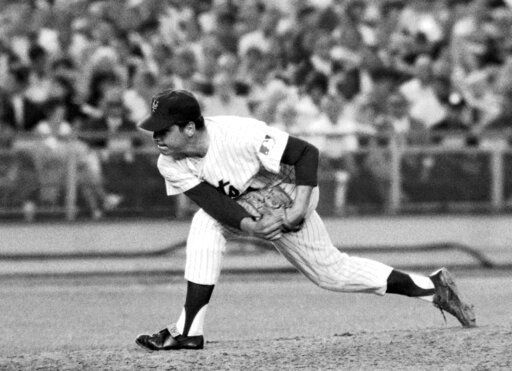 In this July 9, 1969 file photo, New York Mets right-handed pitcher Tom Seaver makes a second-inning delivery against the Chicago Cubs at New York's Shea Stadium where he hurled a one-hitter in a 4-0 victory. 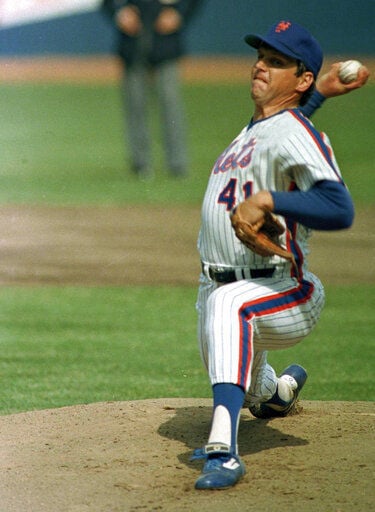 It was one of the greatest days I’ve ever had. A day spent with Tom Seaver, the Hall of Famer, at his home near Calistoga. Just the two of us, joined by his Labrador retrievers, Bandy and Major, talking about baseball and growing grapes and producing wine and his life in the Napa Valley.

I remember the day well, as Seaver, one of the greatest starting pitchers in the history of baseball, who had 311 career wins, a 2.86 earned run average and 3,640 strikeouts over 20 seasons, was so very gracious and kind and welcoming in allowing me to meet with him and do an interview back in the late summer of 2009.

It was a few years before that when I had first met Seaver, a dominating right-hander, as he was a special guest at a Napa Little League event at the Royce Hall Complex at Garfield Park.

I don’t know if Seaver remembered me or not when I later called him, asking if he was available to meet with me for a story that I had wanted to do – about his life as a vintner, his life in baseball, his life far away from the bright lights and noise and congestion of a big city like New York, where he won a World Series with the Mets in 1969.

“There’s always something to do,” Seaver, who is originally from Fresno, told me. “You’re a caretaker for the land. I’m a gardener. It’s a learning curve here and there is work to do virtually every day. I’m here seven days a week.”

The walking trail that he took me on from his home leads directly to his workplace – 3.2-acre hillside vineyards from high atop Diamond Mountain in northern Napa County, with scenery and views that are absolutely stunning and amazing.

“My vineyard is spotless,” he said.

The 116-acre property that he calls home has beautiful trees, a combination of madrone, redwood, Douglas fir and tanbark-oak.

The hours that I spent with Seaver that day – the time that he spent taking me around his home and answering my questions, talking about his work as a grape grower with Seaver Vineyards and his career from 1967 to 1986 on four different teams – are something I will always remember and cherish.

“I was proud of what I did for a living. It’s a great celebration to be in Cooperstown. But it was the journey, 20 years of doing what I loved to do,” he said.

“I did more than I could have ever dreamed of. I had good mechanics, whether you agree with them or not.”

He took me inside his office, which was filled with awards and memorabilia and all kinds of baseball history. There was no ego or gloating on Seaver’s part.

As I looked around at everything, I didn’t see a computer anywhere. He told me he didn’t need one. I asked him how he stays in touch with people, such as email. He said he didn’t need a computer, and he then took out a piece of paper and a pen from his desk. He said he does his correspondence through writing letters.

“My cherished moments are stuff like this,” he said, pointing to a picture of him and Carlton Fisk. “All the stuff is in here — my personal collection of stuff.”

As one of the greatest starting pitchers in the history of baseball, he won the National League Rookie of the Year Award in 1967, was a three-time NL Cy Young Award winner, and a 12-time All-Star selection. He threw 61 shutouts.

His No. 41 uniform for the Mets is retired.

Last week, the National Baseball Hall of Fame, located in Cooperstown, New York, issued a statement on its website:

“The Seaver family announced today that Hall of Fame pitcher Tom Seaver has recently been diagnosed with dementia. Tom will continue to work in his beloved vineyard at his California home, but has chosen to completely retire from public life. The family is deeply appreciative of those who have supported Tom throughout his career, on and off the field, and who do so now by honoring his request for privacy. We join Tom in sending warmest regards to everyone.”

I know something about dementia, as both my dad and grandfather both had it before they died. My dad got me into sports – helping me in baseball and basketball and doing all he could after work each day to further instill a love for the game. When I was cut during tryouts for high school basketball, he didn’t give up on me, and became my coach on a youth recreation team in Walnut Creek for two years.

I will keep Seaver in my thoughts and continue to keep in mind just how powerful and competitive and masterful he was when he took the mound as he challenged hitters up and down the lineup.

He is a legend, a hero, a class act all the way around.

It was in 1975 when Brusstar, a Napa High School graduate, saw Seaver pitch for the first time. Seaver beat the St. Louis Cardinals, throwing a two-hit shutout, at Shea Stadium in New York.

“They had absolutely no chance,” said Brusstar, who spent parts of nine seasons in the major leagues. “He was just dominating. He had pin-point control. He commanded the ball.”

Brusstar sat along the first-base side in the stands that night, looking on as Seaver worked into the night.

“Tom was a phenomenal athlete. He had the whole package,” said Brusstar.

In memory of Tom Seaver

Letters: He was a real grape grower.

The Tom Seaver I came to know

The illustrious career of Baseball Hall of Famer Tom Seaver has been lauded on the pages of the St. Helena Star, the New York Times and The Sa…

In this July 9, 1969 file photo, New York Mets right-handed pitcher Tom Seaver makes a second-inning delivery against the Chicago Cubs at New York's Shea Stadium where he hurled a one-hitter in a 4-0 victory.