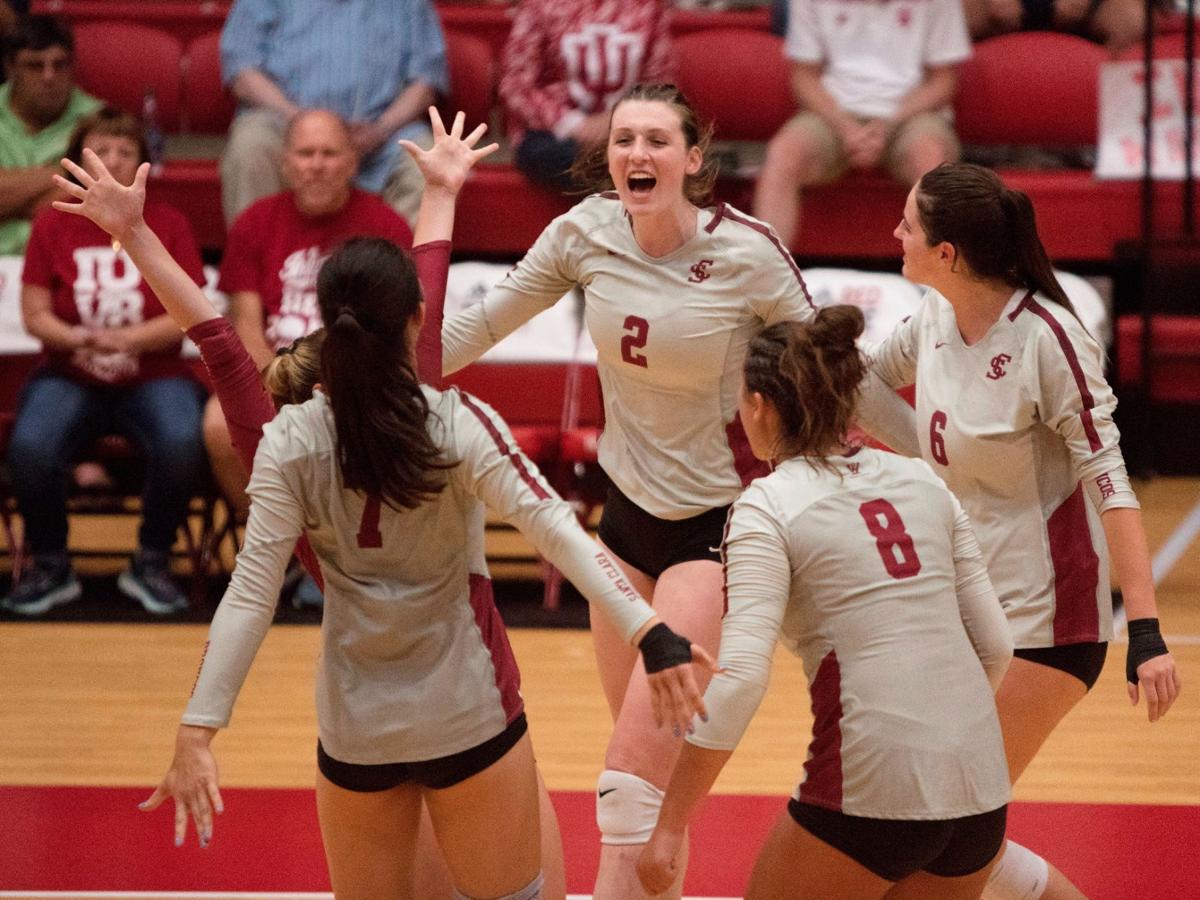 Justin-Siena graduate Julia Sangiacomo (2) celebrates a point with Santa Clara University teammates during a win over the University of Tennessee Martin at the Indiana Invitational in Bloomington, Ind. on Aug. 30.

Julia Sangiacomo, a 6-foot-5 freshman outside hitter for Santa Clara University and a three-time Napa County Player of the Year, was selected to the U.S. Women’s Collegiate National Team-Anaheim Roster, USA Volleyball announced on March 11.

The 2019 Justin-Siena graduate is one of 28 collegiate players scheduled to train June 21-27 at American Sports Center in Anaheim and compete side by side with the U.S. Women’s National Team as it prepares for the Tokyo Olympic Games, Santa Clara athletics reported.

Sangiacomo, who is from Sonoma and played her junior club volleyball for the Absolute Volleyball Club of Marin County, was named to the All-West Coast Conference Second Team and WCC All-Freshman Team last fall.

The announcement was made by the National Association of Collegiate Directors of Athletics, which will honor 28 individuals comprising seven collegiate divisions – NCAA, NAIA and community college levels – across the country, the California Community College Athletic Association and NACDA announced.

The NATYCAA is the organization of two-year college athletic administrators with membership open to all two-year institutions throughout the country, and its awards recognize and reward overall program excellence at the two-year college level, according to cccaasports.org.

Jennum, who played soccer and basketball for the Crushers, will receive the award on June 9, during the 55th annual NACDA Convention at the Mandalay Bay Resort in Las Vegas.

Jennum has been Mt. SAC’s Director of Athletics since 2010, overseeing 23 sports for the Mounties. He is also Mt. SAC’s Dean of Kinesiology, Athletics & Dance.

“This is a tremendous honor, one that cannot be achieved by one person,” Jennum said in a report at cccaasports.org. “The award would not be possible without my staff, coaches, student-athletes and the tremendous support of our administration and Board of Trustees. This is truly an honor that belongs to everyone here at Mt. SAC.”

The award “highlights the efforts of athletics directors at all levels for their commitment and positive contributions to student-athletes, campuses and their surrounding communities,” it was reported at nacda.com. Divisions include NCAA FBS, FCS, Division I-AAA, II, III, NAIA/other four-year institutions and junior college/community colleges, according to nacda.com.

“The future of our industry continues to look bright with athletics leaders like these at the helm of departments across the country,” NACDA Chief Executive Officer Bob Vecchione said at nacda.com. “Out of our 28 ADOY winners, 22 are receiving this honor for the first time in their careers. It is exciting and inspiring to see the new faces coming up through the ranks and earning well-deserved recognition for their efforts on their campuses.”

Jennum’s father, Joe Jennum, spent 29 years at Napa Valley College coaching and teaching, from 1975 to 2003. He served as athletic director, assistant AD, division chair for the P.E. department and was the head coach for men’s and women’s basketball, men’s and women’s golf, softball and track and field. He developed the school’s adaptive P.E. program, started the women’s golf program, was the first president of the Bay Valley Conference, and taught health education, basketball, racquetball and golf classes.

He coached the 2003 men’s golf team to the state title and was inducted into the NVC Athletic Hall of Fame in 2015.

Prolific Prep of Napa Christian, which went 31-3 and won the Grind Session national title, is No. 7 in the final 2019-20 MaxPreps Top 25 high school boys basketball rankings, it was announced on March 20 at MaxPreps.com.

Napa High graduate Addie Dearden, a senior defender on the UC Davis women’s lacrosse team, was credited with three ground balls in an 18-12 loss to George Mason at UCD Health Stadium on March 11.

The Atlantic League of Professional Baseball announced at atlanticleague.com on March 17 that shortstop William Salas has signed with Pennsylvania’s York Revolution as a free agent. The independent league is in its 23rd season.

Salas played in 61 games and batted .339 with 77 hits last year for the Napa Silverados, a member of the Pacific Association of Professional Baseball Clubs. He had 14 doubles, 2 triples, 5 home runs, 37 RBIs and 40 stolen bases, and was charged with 6 errors.

Micah Elan, a senior guard for Pomona-Pitzer and a former member of Prolific Prep of Napa Christian, was named to the 2020 National Association of Basketball Coaches’ All-America team.

Elan made the Division III Second Team after averaging 21.6 points on 48.6% shooting from the field, 4.4 rebounds and 4.4 assists per game.

Kathleen Schafle, a senior attacker from Napa, was named to the 2019 Big West Conference Commissioner’s Honor Roll for the UC Davis women’s water polo team, it was announced at ucdavisaggies.com on March 24.

Schafle is a Vintage High graduate and is majoring in managerial economics.

Three Napa County players are listed among the many nominees for the 40th annual Cal-Hi Sports All-State Team for girls basketball, CalHiSports.com announced on March 24.

Calistoga High seniors Lizbeth Escobedo and Vanesa Queipo are joined by Alexis Woodson, a sophomore at Monte Vista High in Danville who played for American Canyon High as a freshman, as nominees from the CIF North Coast Section.

Christin Locke and Kyla Martin of American Canyon, Tessa Salvestrin of Justin-Siena, and Ava Dominguez of Napa are also on the team, as announced by prep2prep.com.

Notes and Quotes: All-academic honors for Dearden at UCD

Marty James covers Napa Valley athletes and sports topics as well as regional ones that may be of interest.

Justin-Siena graduate Julia Sangiacomo (2) celebrates a point with Santa Clara University teammates during a win over the University of Tennessee Martin at the Indiana Invitational in Bloomington, Ind. on Aug. 30. 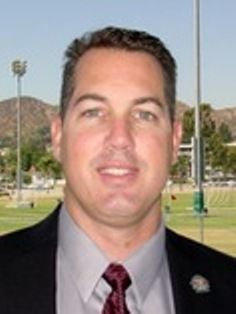