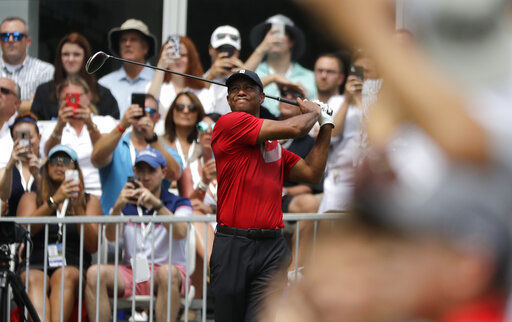 Tiger Woods watches his tee shot on the 14th hole during the final round of the BMW Championship golf tournament at Medinah Country Club, Sunday in Medinah, Ill. 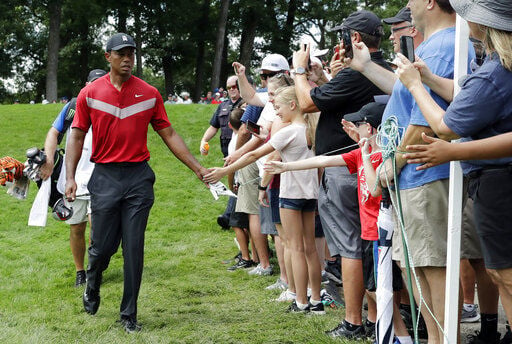 Tiger Woods, left, greets fans as he walks to the 14th fairway after hitting his tee shot during the final round of the BMW Championship golf tournament at Medinah Country Club, Sunday in Medinah, Ill.

MEDINAH, Ill. — For the fifth time in the last six years, August on the PGA Tour means no more Tiger Woods for the rest of the season. Only now he’s healthy.

He also is the Masters champion. And that makes it a season he wouldn’t trade.

“Very special to win my 15th major and get my fifth jacket,” Woods said Sunday. “Those are special moments to be able to have an opportunity like that. And the rest of the tournaments I didn’t really play as well as I wanted. But at the end of the day, I’m the one with the green jacket.”

Rarely has Woods smiled so wide after not meeting a goal.

His season ended at Medinah, where he won two PGA Championship titles at the peak of his game and his health. He closed with an even-par 72 in the BMW Championship and tied for 37th, nowhere near what he needed to move into the top 30 in the FedEx Cup and advance to the season-ending Tour Championship next week at East Lake.

“It’s disappointing,” Woods said about not returning to Atlanta. “I wish I could have. Last year culminated in a pretty special moment for me, and it would have been nice to go back there. But I’ll be watching the guys on TV.”

It will be the 15th time in his career that Woods did not show up to defend a title on the PGA Tour, remarkable considering that Fred Couples only won 15 times in his career. The other occasions of not defending a title usually involved a change in the schedule, a tournament ending or health reasons.

This is the first time because he wasn’t eligible.

He started the PGA Tour postseason at No. 28 but withdrew after a 75 in the first round at Liberty National with what he called a mild oblique strain. That dropped him to No. 38 in the FedEx Cup, and he finished at No. 42.

It was mildly surprising that Woods even made it to Medinah to give it a try, and he looked fairly normal, except for some rust. He gave it his best shot at returning to the scene of perhaps the biggest moment in golf last year — a victory at East Lake, with thousands of fans spilling inside the ropes to watch Woods cap off his comeback from four back surgeries by beating the best players.

And then he did it again where it really matters — a major.

Woods needed some help from Francesco Molinari’s tee shot into Rae’s Creek on the 12th hole in the final round at Augusta National , and similar blunders by Brooks Koepka and Tony Finau, but he looked like the Woods of old instead of an old Woods with his mistake-free finish for a 15th major, his first in 11 years.

Just like that, the count to Jack Nicklaus and his 18 majors was on again.

Instead, that was as good as it got.

Woods spoke vaguely of his back not being right in the cold of Bethpage Black for the PGA Championship in May, his first tournament since the Masters. He never got on track at Pebble Beach for the U.S. Open. After another long break, he missed the cut at the British Open and then simply wanted to get home.

But he won the Masters, and that makes up for a lot.

“It’s like I told him coming off 18, he’s got the jacket. That’s all that matters,” caddie Joe LaCava said. “I’d be lying if I told you I wasn’t disappointed with the second half of the season. If I was happy and satisfied, I shouldn’t be in the industry.”

LaCava also has a sense of how Woods is feeling at age 43 with eight surgeries — four on his knee through 2008, four on his back since 2014.

“By the time we get around to next year, he’ll be refocused and be ready and get after it,” La Cava said.

The season is over. The year is not.

Woods heads home for a nine-week break before returning for the first PGA Tour event in Japan at the end of October. He has his Hero World Challenge in the Bahamas the first week of December, followed by his role as U.S. captain in the Presidents Cup at Australia’s Royal Melbourne.

He did not make the team. It would be surprising if he picked himself, especially playing only one tournament in Japan, for one of his four captain’s choices.

Woods finished the season with 12 tournaments, his shortest PGA Tour season when healthy without any outside distractions. He wasn’t always tournament sharp, and now he has two months of no competition.

“I think right now the most important thing is fitness, for sure,” Woods said. “Keep going the way I’m going right now because I need to get a little bit stronger in certain body parts, activate different areas. I need to get those parts stronger and then starting building up my game for Japan.”

He won’t be in Georgia next week for the Tour Championship.

Instead, Woods will be at home in South Florida, where he has a green jacket to remind him that yes, it was a year worth celebrating.

Trump plays golf for 1st time since the coronavirus pandemic

President Donald Trump played golf Saturday for the first time since he declared the coronavirus pandemic a national emergency more than two months ago, leading to the shutdown of much of American society.

Tiger Woods watches his tee shot on the 14th hole during the final round of the BMW Championship golf tournament at Medinah Country Club, Sunday in Medinah, Ill.

Tiger Woods, left, greets fans as he walks to the 14th fairway after hitting his tee shot during the final round of the BMW Championship golf tournament at Medinah Country Club, Sunday in Medinah, Ill.