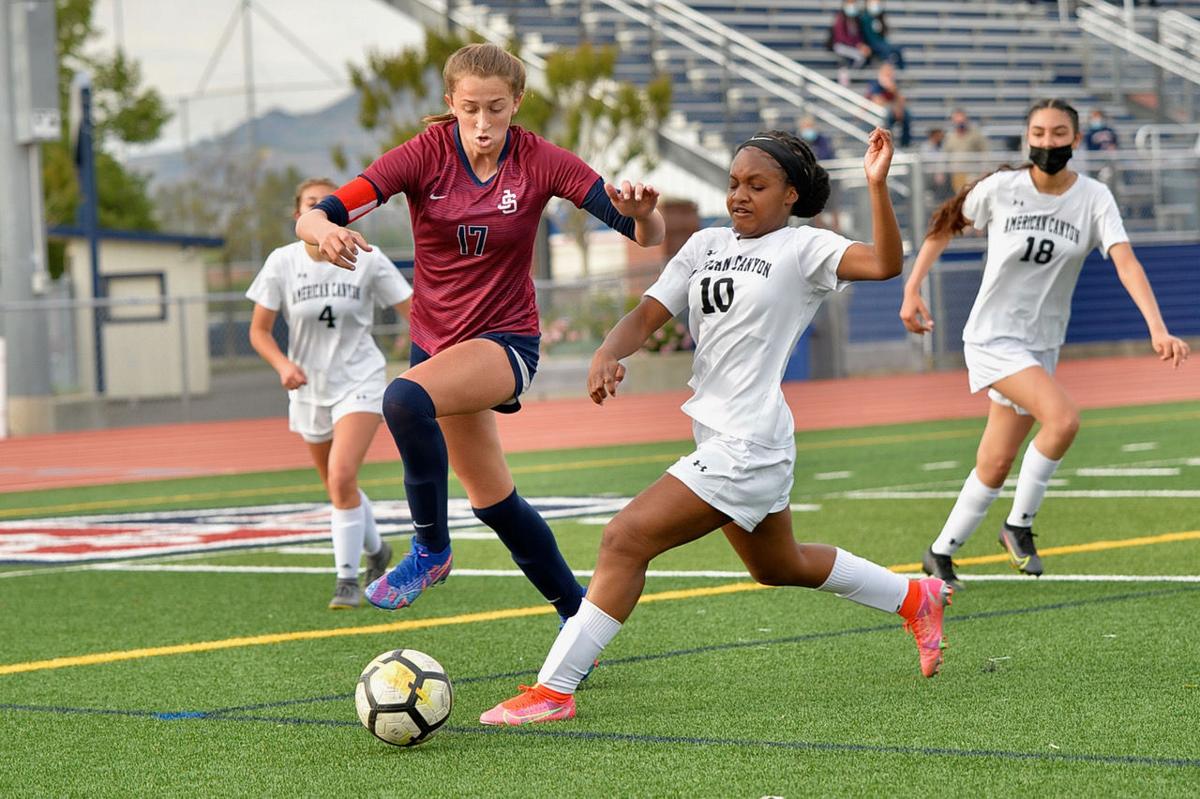 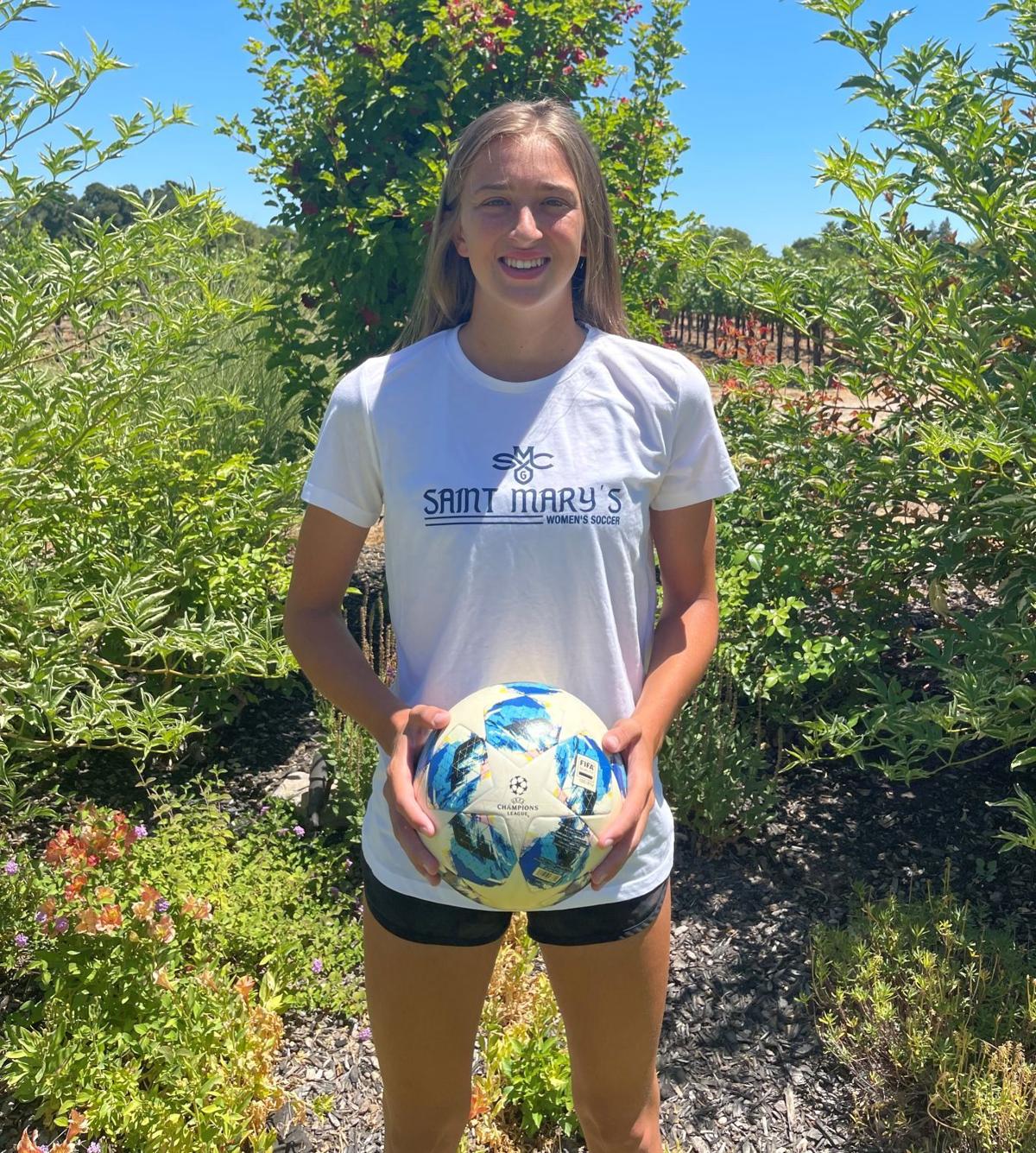 Justin-Siena's Tessa Salvestrin is the 2020-21 Napa County Girls Soccer Player of the Year.

Tessa Salvestrin thought of going other high schools other than Justin-Siena.

She lives next door to St. Helena High, which would have been a 30- to 40-second walk instead of the 30- to 40-minute drive she takes to Napa.

She’s a soccer star at Justin-Siena, having led the Braves with 49 goals in three varsity seasons so far. But the Braves have won only seven games during her three seasons there. St. Helena, which plays in the fall, has had at least seven wins a year since 2013.

But Salvestrin’s father, Richard, went to Justin-Siena and has always been close to the youngest and most athletic of his three daughters, even helping coach her Little League baseball teams. Her mom, Shannon, grew up playing soccer in Calistoga before graduating from the high school there.

“I thought about it,” she said of attending St. Helena High. “Obviously I have a lot of friends who went there. But my dad went to Justin and both my sisters (Emma, 24, and Hannah, 23) went to Justin, so I just felt like I should go to Justin, too — and I also really wanted to play for Coach Eric Branagan-Franco.”

When she aged out of Little League and got heavily involved in club soccer, it wasn’t long before she started thinking about where she’d like to play in college. One way to all but ensure one will get offers from NCAA Division I women’s soccer programs is to attend Shattuck-Saint Mary's, a boarding school in Faribault, Minnesota.

The prestigious school contacted Salvestrin after her 19-goal sophomore season, hoping she could visit and consider transferring there.

“It’s an athlete’s dream. It’s basically like college,” she said. “You train in the morning, go to class in the afternoon and train at night. You play all across the country against top-level teams, and all the players on the team are committed to D-I schools.”

But Salvestrin decided to stick with Justin-Siena.

“I really considered it for a few months, but in the end I decided I wanted to stay home and stay at Justin,” she recalled. “We had planned to go visit the school, and then after our last game of my sophomore season I just kinda looked back and saw what I would miss if I went out there. I decided it was the right choice to stay home.”

This past spring, despite being forced by the pandemic to start the soccer season five months later than usual, Salvestrin matched the 15 goals she’d scored as a freshman and added a career-high 3 assists.

“She excelled for us not only offensively but also as a leader,” Branagan-Franco said. “She even played in goal at times to help close out games. She helped turn games in our favor multiple times in our comebacks against our local rivals.”

Salvestrin said she has too much fun playing soccer for the Braves to want to leave. It’s a nice change of pace from her club team, the Pleasanton Rage 2004 Elite Clubs National League team, which went to a national tournament in July.

Having led the county’s winter soccer teams in scoring for the third straight year, Salvestrin has been named the Napa Valley Register’s 2020-21 Napa County Girls Soccer Player of the Year.

“I definitely feel like a role model on the team, that players do look up to me, so I always try to lead by example and do the best that I can,” she said. “Sometimes I’ll have bad games and you’ll be able to see my frustration and everything. But I’ll always try to make sure I’m helping all my teammates improve and hope that they’re having fun.”

The Braves and fellow Vine Valley Athletic League soccer teams will go back to playing in the winter this school year. Her senior season starts in two months, and Salvestrin can’t wait.

“We definitely have a good team this year and I’m excited to see what we do,” she said. “We should have a good season.”

In November, just before the season starts, Salvestrin plans to sign a letter of intent to play for the Division I soccer program at Saint Mary’s College of Moraga while majoring in kinesiology. She made a verbal commitment in July.

“They just got a new coach (Theresa Romagnolo) and it’s her first season that she can actually recruit players since she got the job, so she’s really trying to build a competitive team that can win the West Coast Conference and make it far in the NCAA playoffs.”

She said she’s been injured enough to know what her major is all about.

“I’ve had many experiences in ER’s and physical therapists from playing soccer,” she said, “though I’ve only had to miss a few games in high school due to injuries.”

She said her favorite game this past spring was a crazy 5-5 tie against Vintage at Memorial Stadium. After Salvestrin scored the game’s first goal in the third minute on a through ball from Olivia Janerico, the Braves faced a seemingly hopeless 4-1 halftime deficit. But Salvestrin scored three goals to tie it up, two on assists from Thais Thomson-Rangel and Lexi Barlas. After the Crushers regained the lead, Gabriela Ryan and Janerico teamed on the tying goal in the final minutes.

“We had played a pretty bad half, starting off strong and then falling apart,” Salvestrin recalled. “In the second half, we just came together as a team. We were playing really well. We were fighting for the ball. I think everyone had a lot of fun working so hard to get back from the deficit that it was so rewarding, even though we didn’t win, to just prove to ourselves that were able to do that. It was a great game.”

She said Branagan-Franco has helped her set her bar high.

“He’s definitely really passionate about soccer and he shows it during practice and games, but it’s just because he loves the sport so much and he wants everyone to be the best that they can be,” she said.

Branagan-Franco isn’t the only coach who’s nominated Salvestrin for County Player of the Year. Vintage head coach Miguel Ayala has also recommended her for the top award the last two years.

“Miguel coached me with Napa United (club soccer) for a few years and he’s been such a big part of my soccer career,” she said. “He really changed me into the player that I am, playing higher-level soccer. I’ll be trying to help us make the playoffs this year and prove that Justin can compete with all these other teams.”

She likes male coaches, undoubtedly, because she grew up with one.

“Me and my dad are always challenging each other, saying ‘I can do better than you,’ so I kinda got my competitive spirit from him,” she said. “But my coaches have also driven me a lot to do better.”

It’s easy to spot Salvestrin in a game. At 5-foot-11, she’s the one who looks like a basketball player.

“I was pretty average height going into high school, 5-4, 5-5, and then freshman and sophomore years I had a huge growth spurt,” she said. “I’ve learned how to use my height to my advantage. I can take longer strides, becoming faster at sprinting, and be able to win balls that are in the air.”

Having played baseball, she felt as a sophomore she would try playing softball for Justin-Siena.

She ended up leading the team with a blistering .722 batting average (13 for 18), 8 doubles, 12 RBIs and 12 runs scored. That was all in just seven games, too, as the pandemic stopped the season after the Braves got off to a 6-1 start.

“I’ll probably play softball again this year,” she said. “When I played baseball, so I was always working with my dad in the back and the front yard, trying to get better and perfect my swing, so it was kinda natural for me when I started playing softball.”

Salvestrin has been playing soccer for about 14 years now.

“I always just think there’s room for improvement in my personal play,” she said. “There are new skills to learn that you can try and gain. There are new ways to shoot the ball, new ways to pass the ball and there’s always things that you have to do on and off the ball, so it’s constantly changing and I just think it’s really fun.”

The Federated Women of Upper Napa Valley are collecting new or gently used purses and/or personal items for women in need on Nov. 3 in St. Helena.

Justin-Siena's Tessa Salvestrin is the 2020-21 Napa County Girls Soccer Player of the Year.