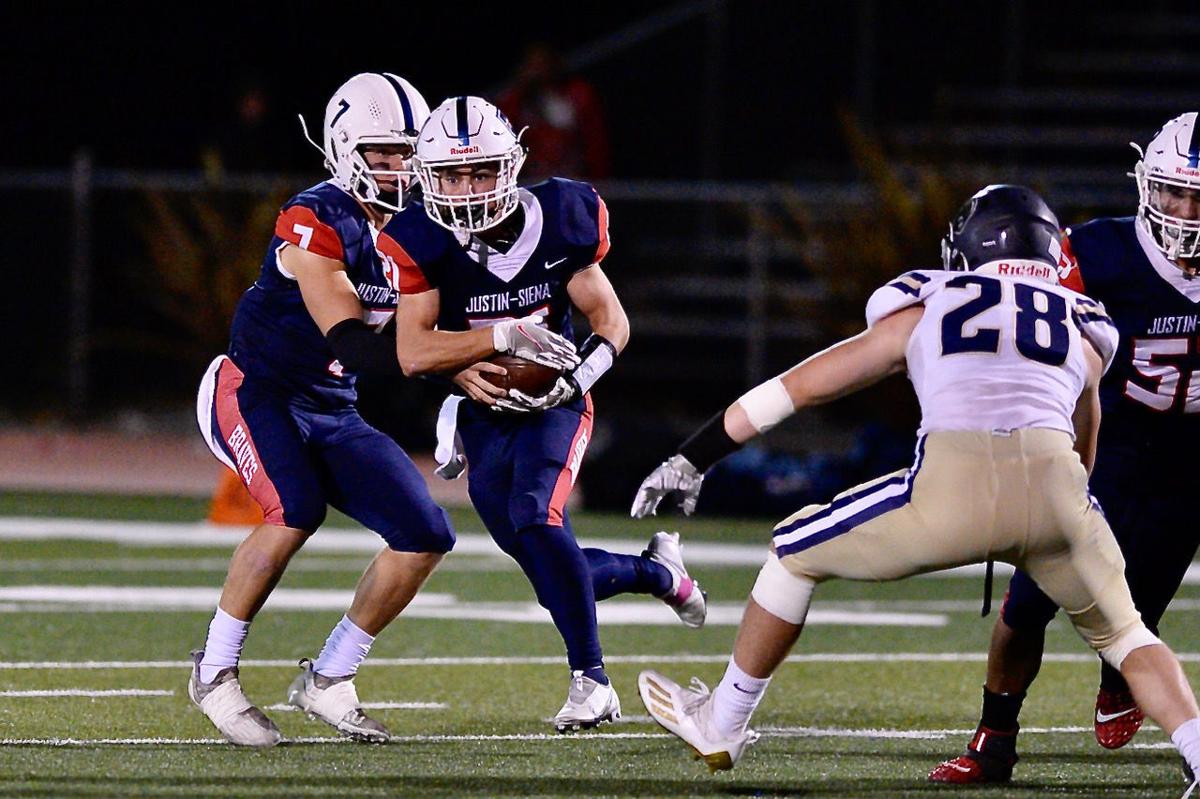 -Justin-Siena quarterback Zach Zurowski (7) looks like he's really handing it off to Caden Parlett, but ends up keeping it for a big gain Friday night. 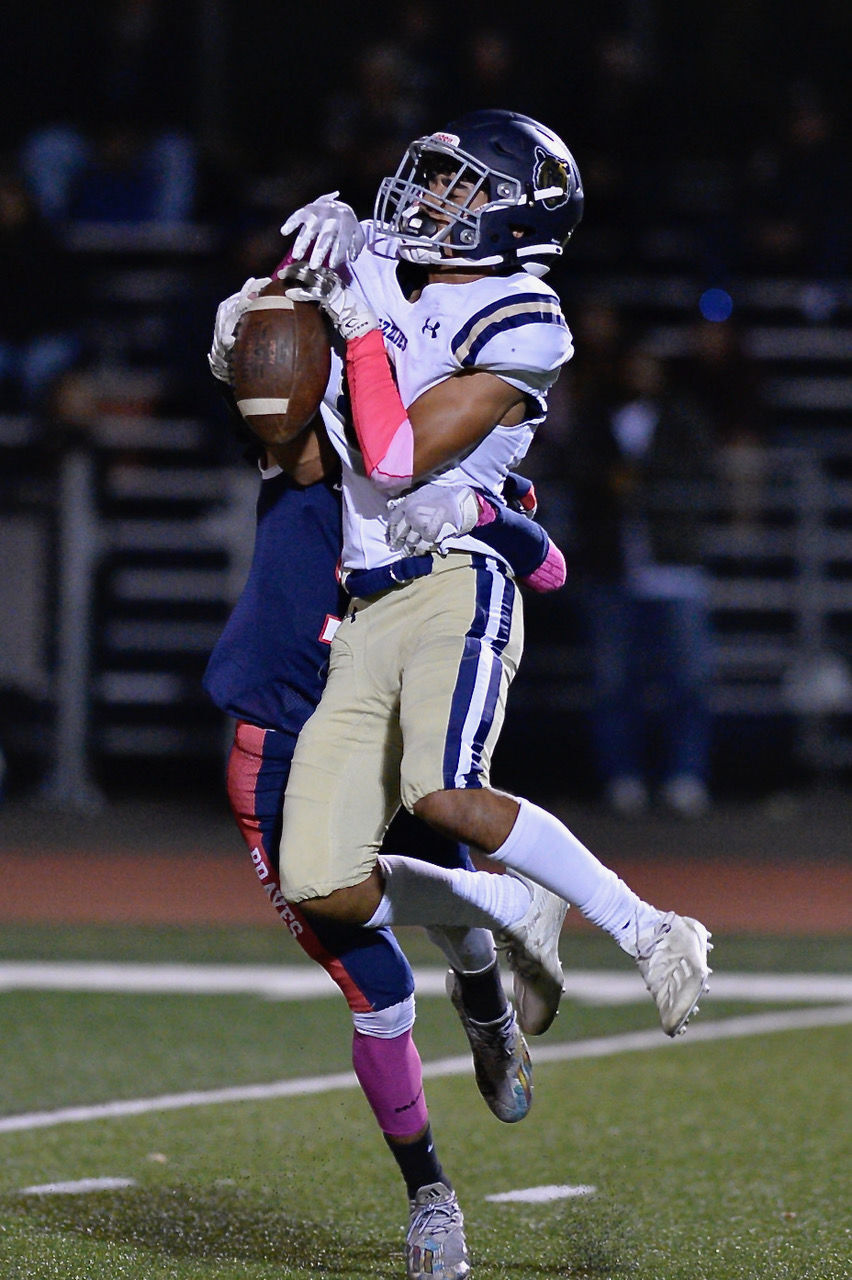 Napa High's Raul Castellanos, showing, has a pass to him broken up by Justin-Siena's Josiyah Maddalone on Friday night. 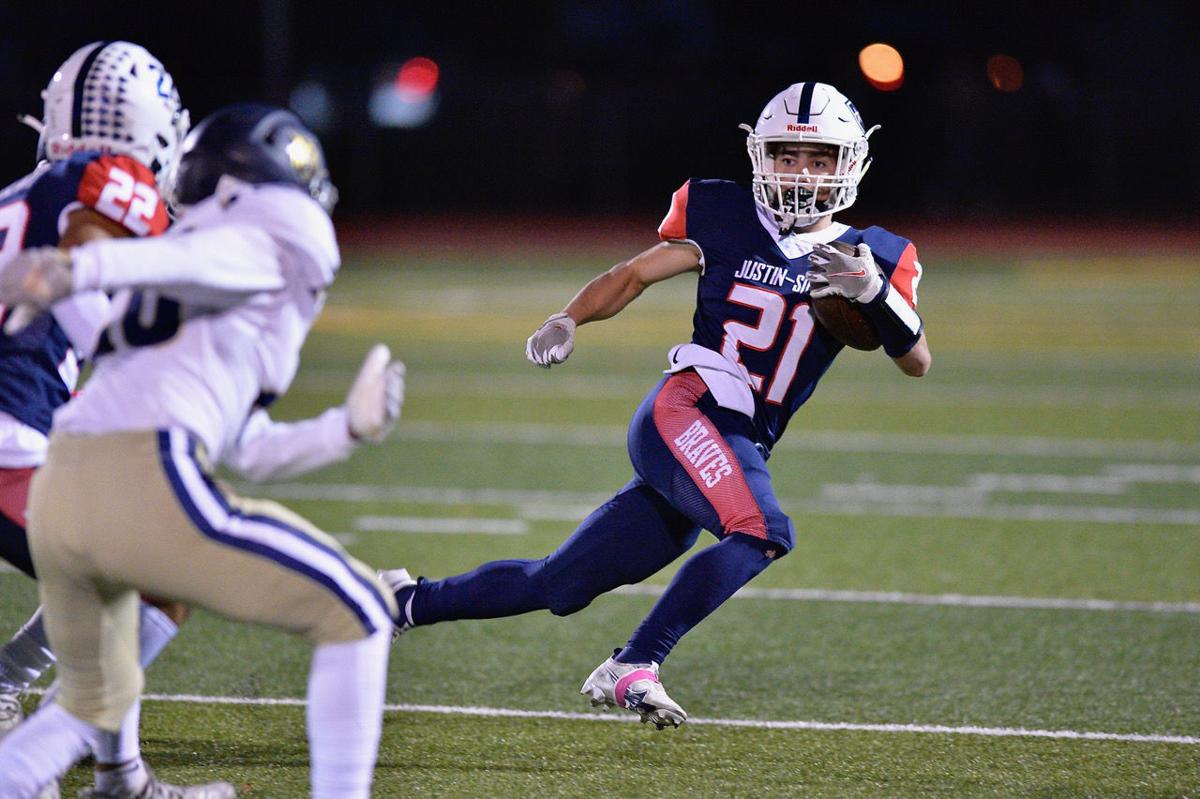 Justin-Siena's Caden Parlett (21) jukes to the outside against Napa High on Friday night. 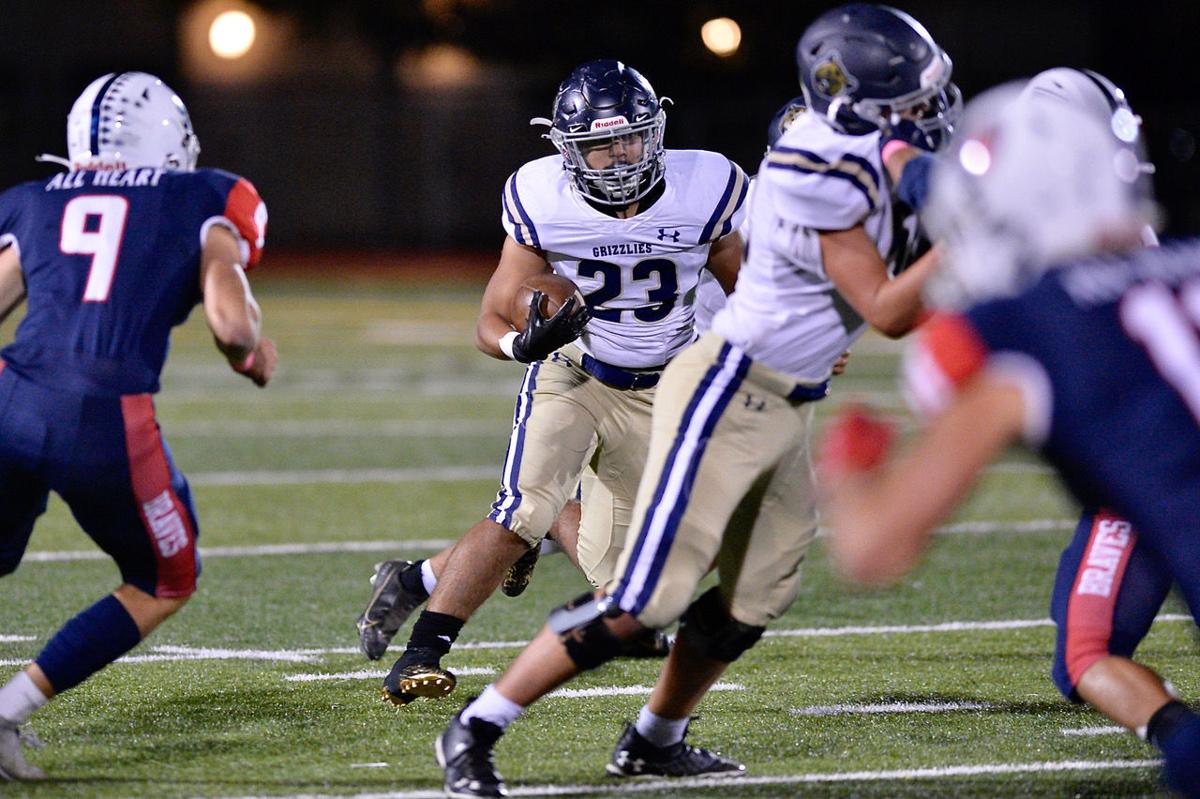 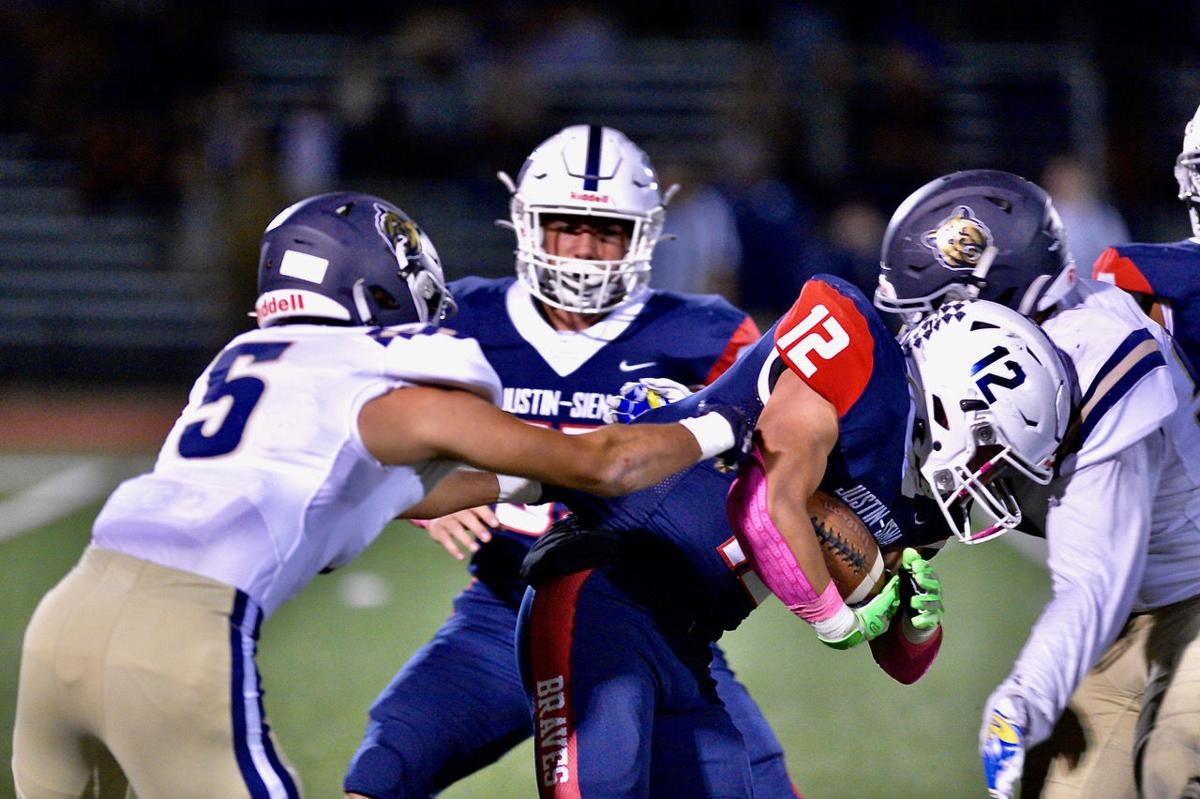 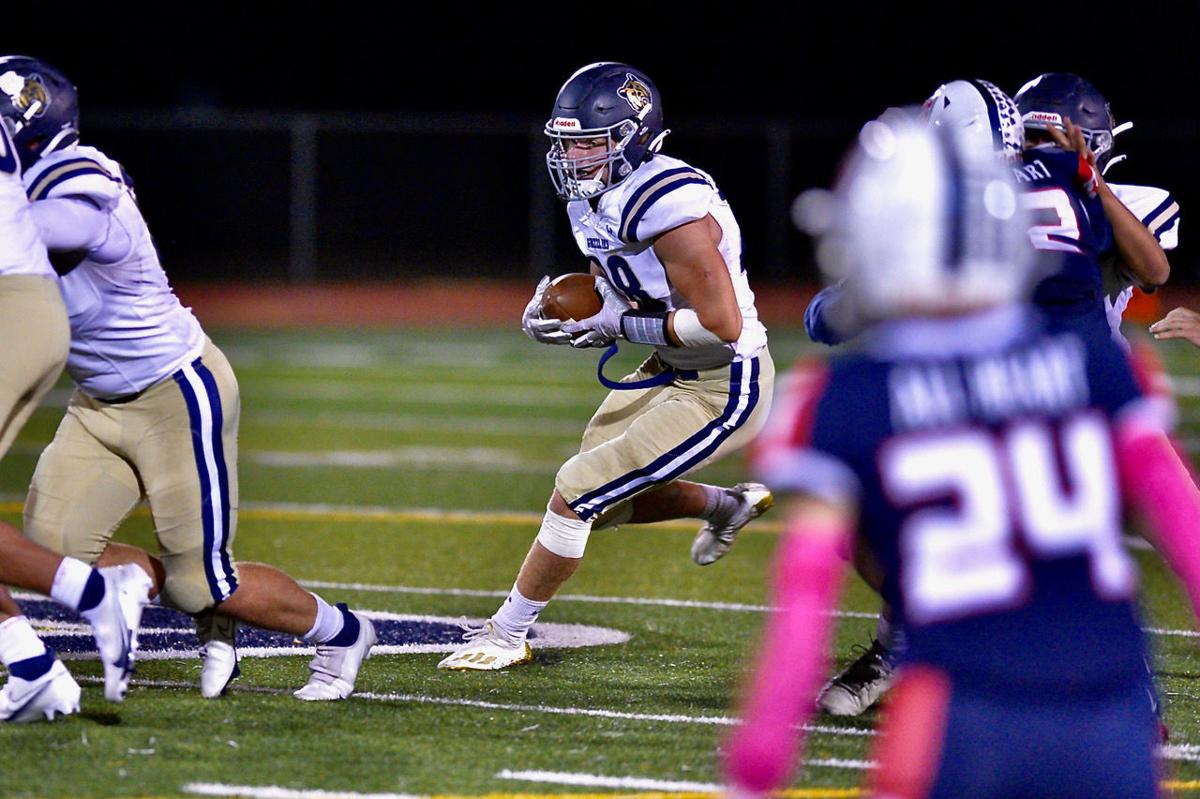 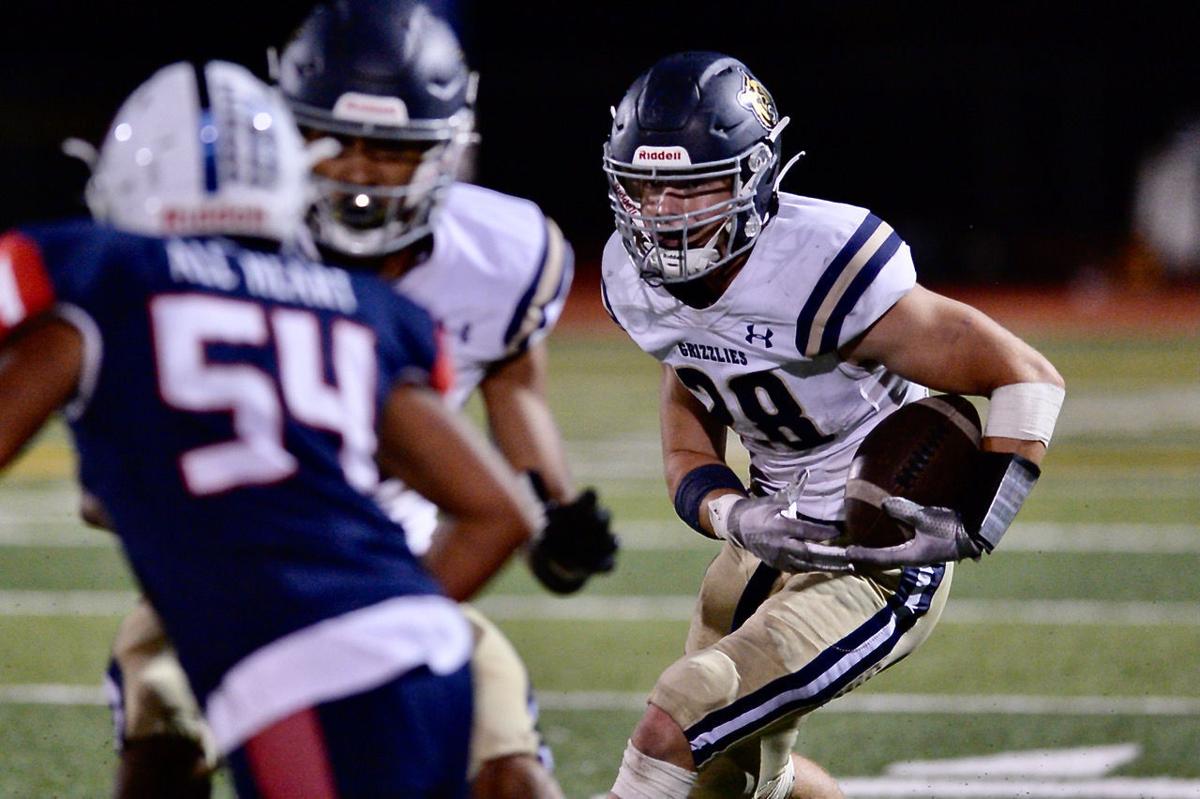 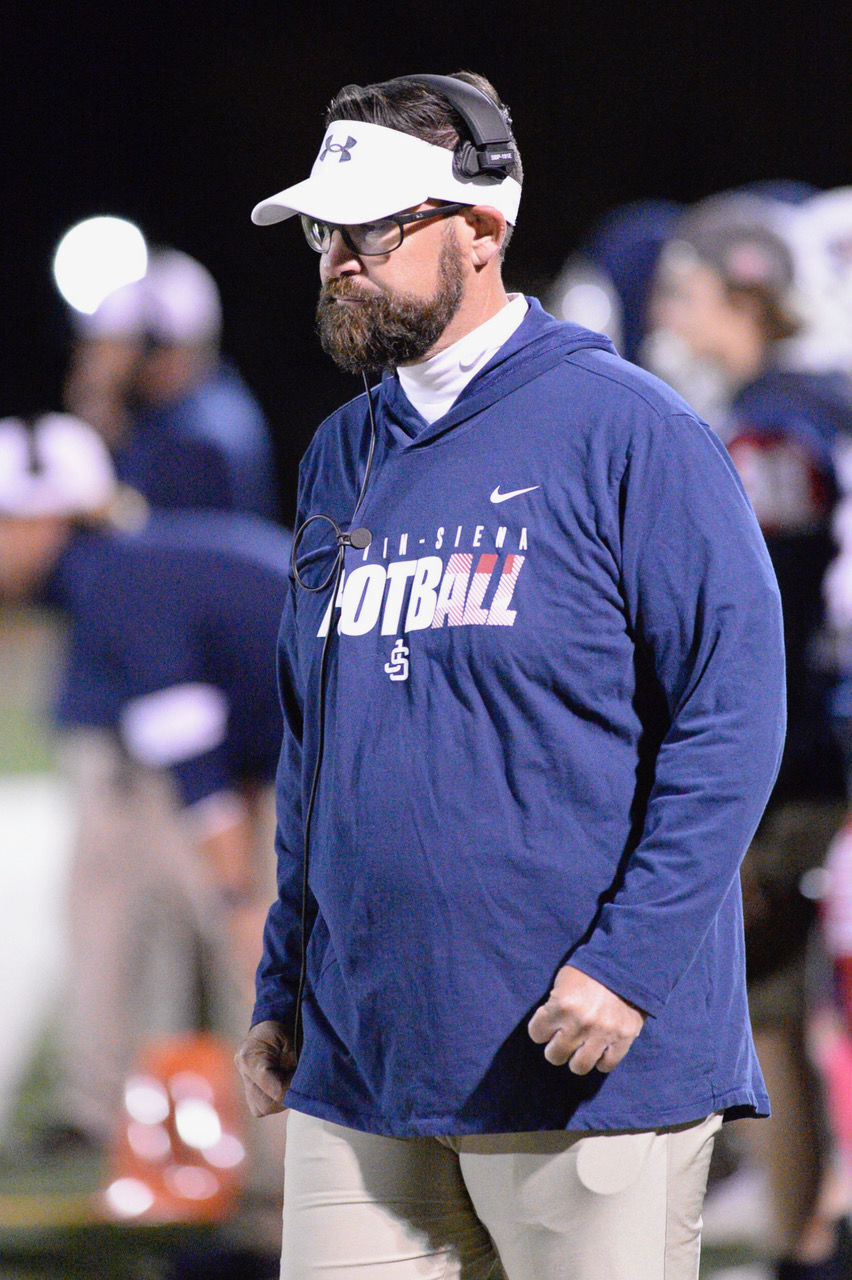 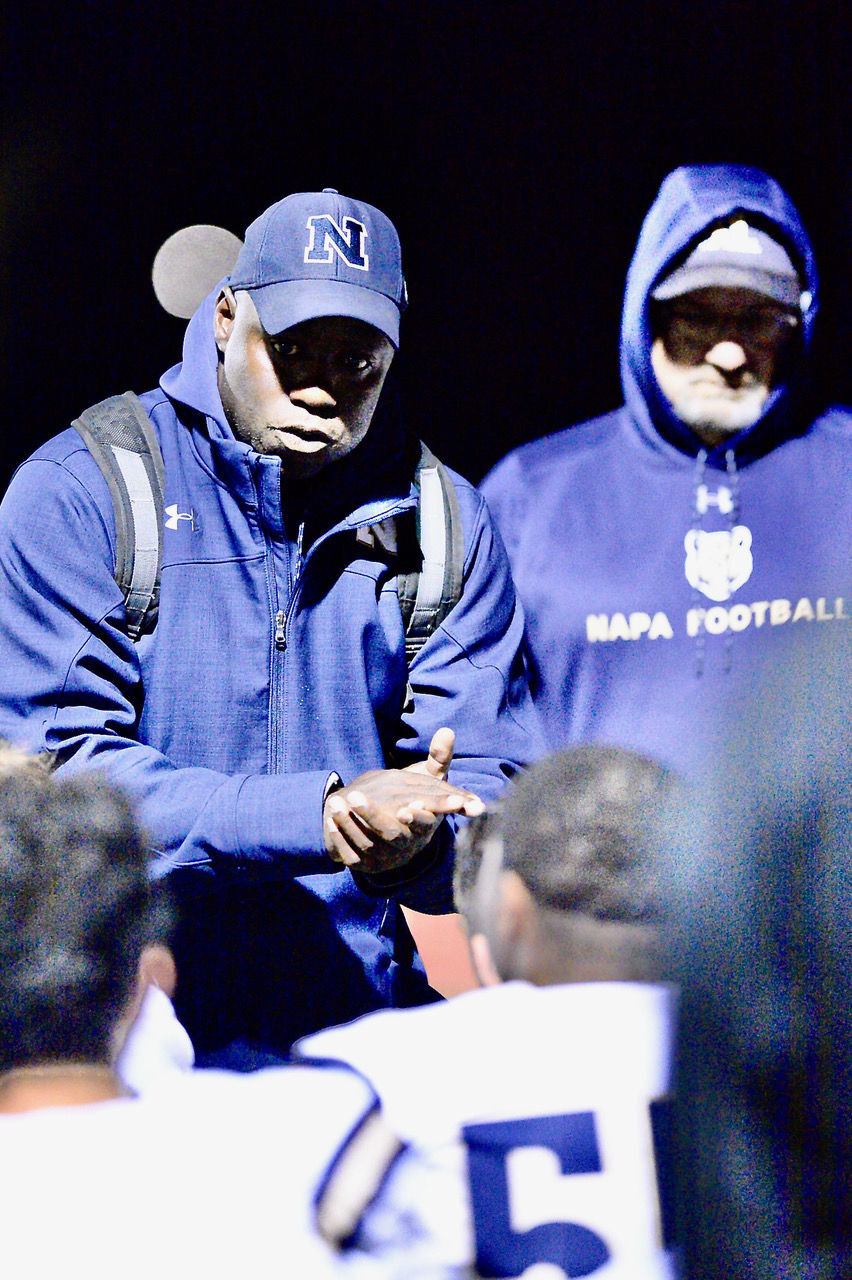 Napa High head coach Askari Adams talks to his team during halftime of its game at Justin-Siena on Friday night.

When a game is this close, grabbing the momentum can be key to winning.

On Friday night, host Justin-Siena got things going its way out of the break and beat crosstown rival Napa High, 14-7, in a defensive slugfest at Dodd Stadium.

The Vine Valley Athletic League win goes a long way for the Braves (4-3, 2-1 VVAL) even though they didn’t exactly achieve it in glorious fashion.

“I think the one thing this team has done a really good job of all year is fighting, no matter the circumstances,” Justin-Siena head coach Brandon LaRocco said. “I thought that showed again tonight. We’ve got to clean it up if we expect to win any more games this year, that’s for sure.”

A plethora of penalties in the game hurt both teams. The main thing that hurt Napa was a lack of execution.

“We went back to what we’ve been doing every week — missed tackles, not executing on offense,” Grizzlies head coach Askari Adams said. “We never did a good job in the first half defensively. In the second half, they came out with those two drives and we just couldn’t tackle, couldn’t execute, wasn’t lining up right.”

Out of the half, Justin-Siena got its first score of the game when quarterback Zach Zurowski found Robby Sangiacomo for a 42-yard scoring pass with 8:42 remaining in the third quarter.

“Robby, he’s so vital to this team because, sure, we can pound the ball down, but eventually you’ve got to loosen up the defense a little bit,” Justin-Siena senior Caden Parlett explained. “Robby is such a deep threat.”

After getting on the board, the Braves recovered a pooch kick that bounced away from Napa and set them up with great field position. That drive was capped off with a Parlett 6-yard touchdown run with 2:32 left in the third quarter. It would also be the game-winning score, thanks to a victory-sealing interception by Trevor L’Esperance.

The score was big for Parlett, who had had some struggles in the first half.

“I was pretty stoked because I didn't practice much this week,” he said. “I had a pretty bad quad contusion last Friday, so I didn't get much practicing, and that kind of contributed to the messed-up handoffs and stuff where the timing was a little off.”

Parlett ended the night with 159 yards on the ground on an eye-popping 30 carries.

“Caden’s a warrior,” LaRocco said of the senior running back. “For a guy his size, he moved the pile pretty well. He’s tough. He’s not going to go down easy. He’s gonna fight for everything he can get. He’s a high-emotion guy, so sometimes that helps him and sometimes it hurts him a bit.”

Napa (0-6, 0-2 VVAL) gained its only lead on the lone score of the first half, when quarterback Dylan Newman found Christoph Horton over the center of the field for a 49-yard scoring strike with 5:09 left in the second quarter.

Highlighting the Grizzlies’ offensive effort on the evening was junior running back Carlos Mata, who ran 15 times for 52 yards. In the first half, he was chunking Justin-Siena. Change-of-pace back Dylan Snider added four carries for 11 yards.

“They both run hard,” Adams said. “It’s a good change-up with Snider back there, too. He’s getting more comfortable every week. They had a pretty good game this week.”

Both teams will continue league play at home next Friday night. Napa will face league-leading Casa Grande of Petaluma. It will be Senior Night for Justin-Siena, as it plays its final regular-season home game against Trower Avenue rival Vintage.

“The key tonight was our line play,” said Justin-Siena head coach Spencer Joske. “We won at the line of scrimmage tonight. When we win up front, it gives us a great chance to win the game.”

It was the second shutout of the season for the Braves.

“Our execution on defense tonight was a team effort,” Joske said. “There were fewer solo tackles; most of our stops were gang tackles with multiple defenders participating in the stop.

“I was especially proud of how some of our less-experienced freshmen stepped up tonight to make a difference,” the coach added.

Gino Wood returned a kickoff for a touchdown and immediately recovered a fumble on the ensuing kickoff. Austin Dragoo recorded his first solo sack of the season and Riley Love, starting at free safety, helped shut down Napa’s passing offense.

-Justin-Siena quarterback Zach Zurowski (7) looks like he's really handing it off to Caden Parlett, but ends up keeping it for a big gain Friday night.

Napa High's Raul Castellanos, showing, has a pass to him broken up by Justin-Siena's Josiyah Maddalone on Friday night.

Justin-Siena's Caden Parlett (21) jukes to the outside against Napa High on Friday night.

Napa High head coach Askari Adams talks to his team during halftime of its game at Justin-Siena on Friday night.