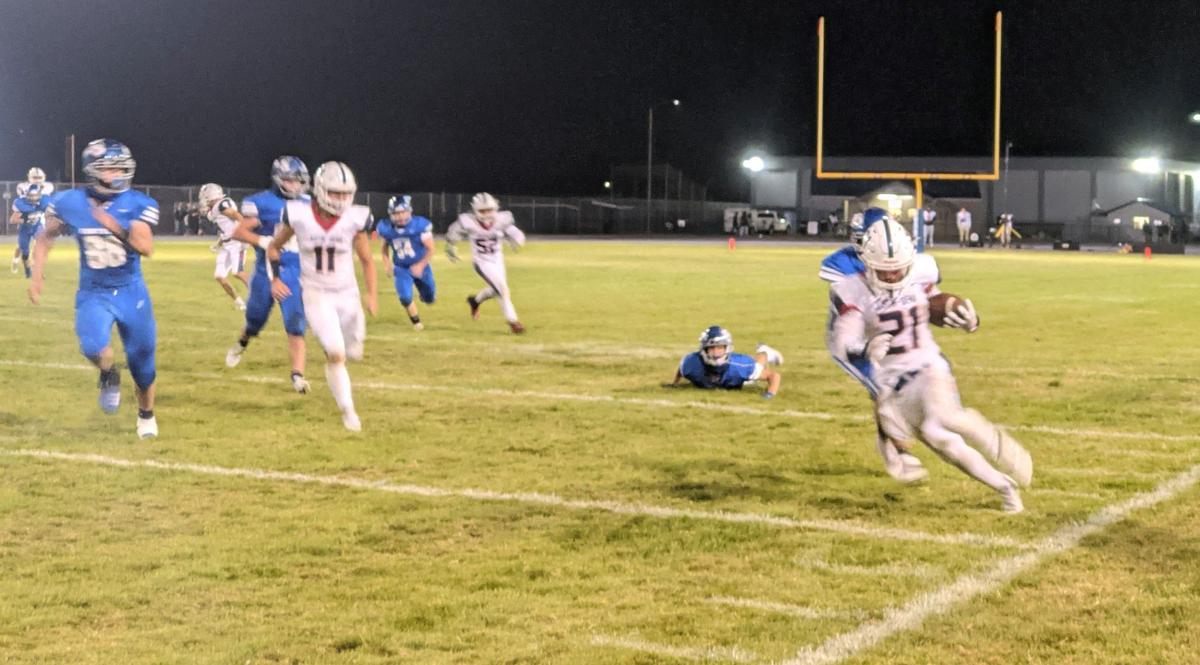 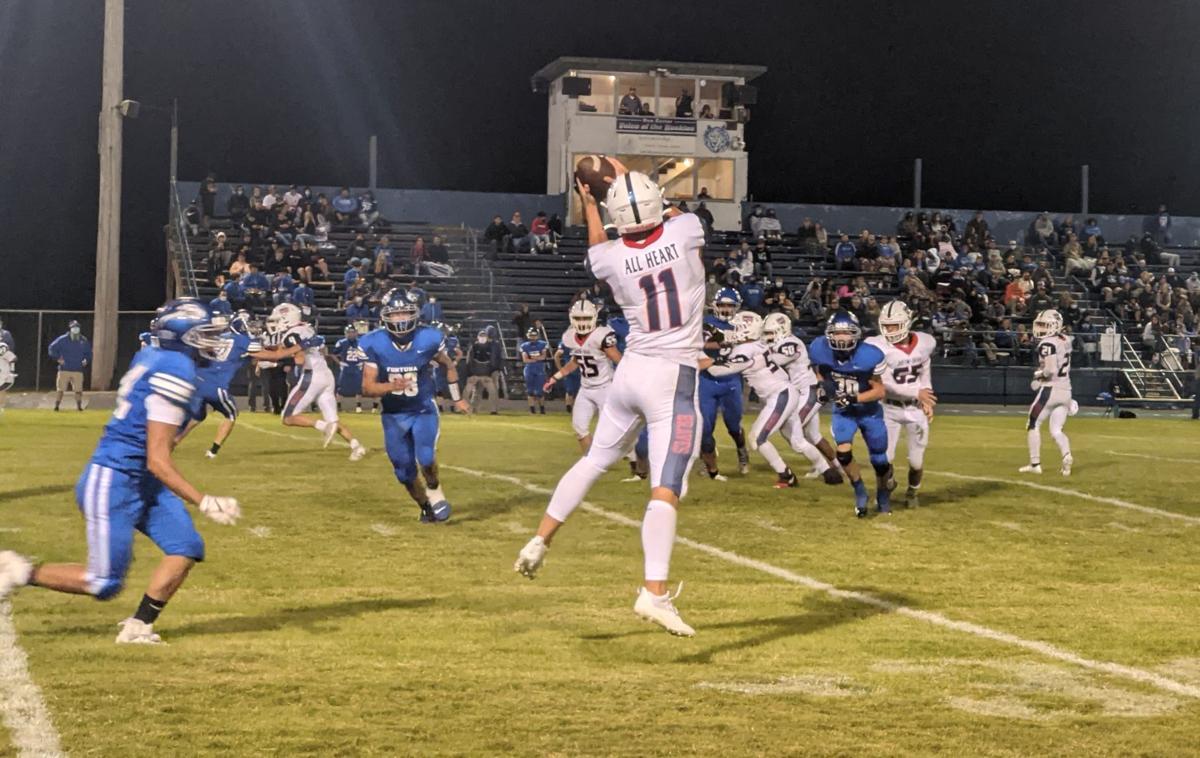 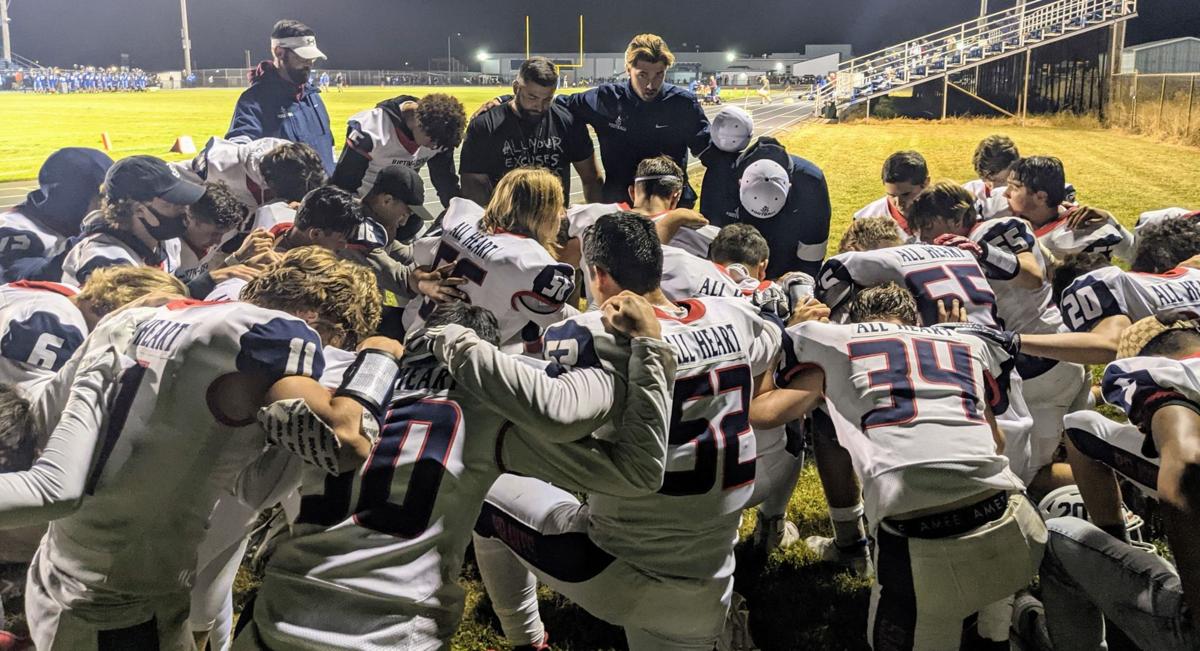 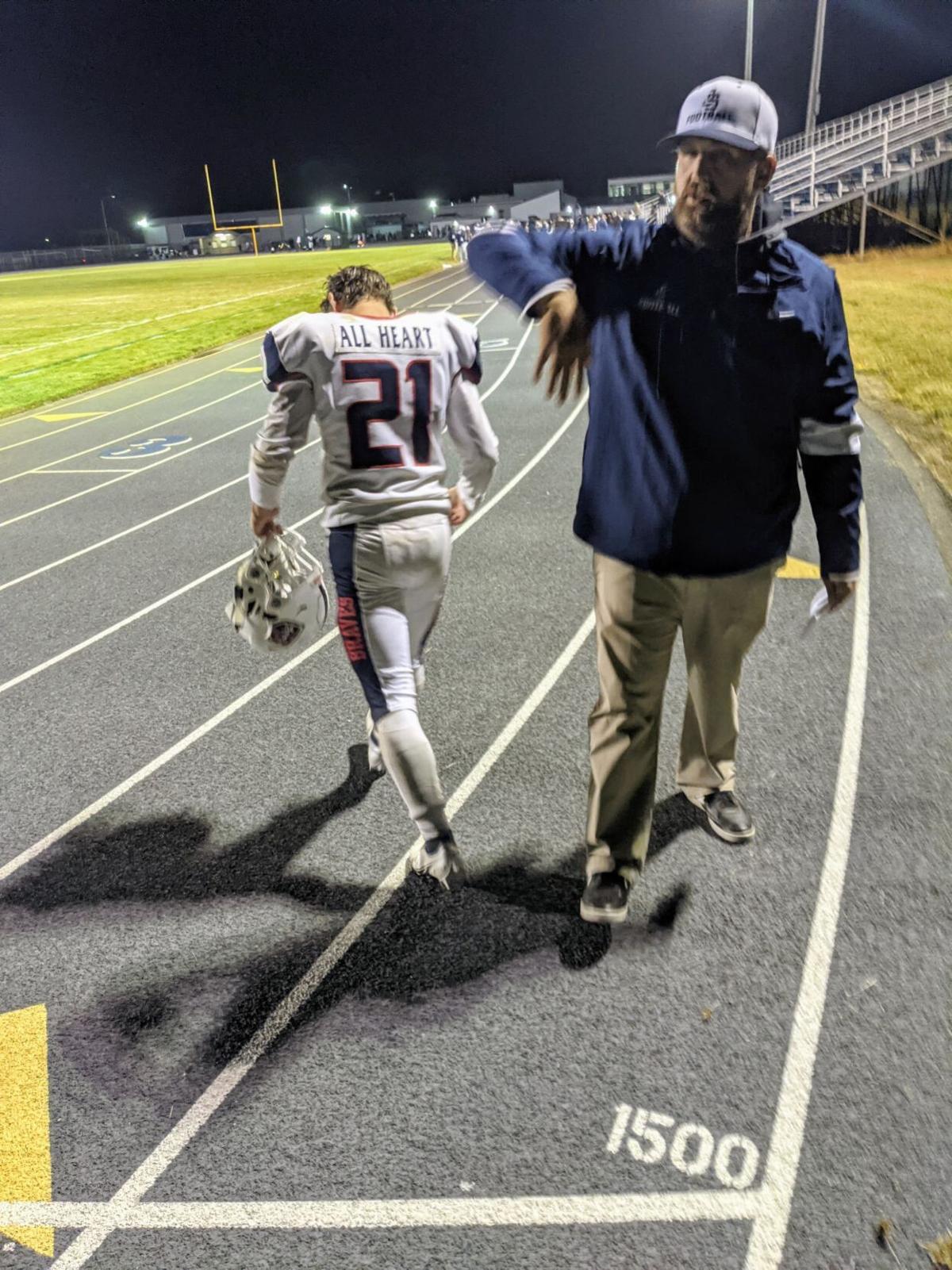 FORTUNA — While most Northern California teams saw their games cancelled Friday night because of poor air quality from ongoing wildfires, Justin-Siena visited Fortuna under blues skies in Humboldt County as Caden Parlett turned in one of the Braves’ best all-time performances in a season-opening, 27-20 loss to the Huskies.

The 5-foot-7 Parlett left everything on the field and could barely stand at the conclusion of the game. One by one, each Fortuna player and coach stopped Parlett and gave him full recognition during the postgame handshake line for his Herculean effort.

The eye-catching performance all started halfway through the second quarter, after the Justin-Siena offense had struggled to put together any consistency. The first play of the quarter had seen Parlett, normally a slot receiver, find a small hole in the Fortuna defense for a 17-yard gain. Three quick misfires later, the Braves punted.

Parlett raced over to one of the main offensive assistant coaches, former Braves star running back Diano Pachote, and said with absolute confidence, ‘I’m seeing the field really well right now. Give me the ball.’ The first play of the Braves’ next drive was a handoff to Parlett and the senior burst through the offensive line for a 65-yard touchdown. Parlett would finish with 279 rushing yards and three scores on just 16 carries, adding a fumble recovery and a blocked extra point.

“He’s a great example of what a Justin-Siena football player is all about, right? It doesn't matter what you did on the play before. You go and you do your job on the next play, whether that be special teams, defense or offense,” Justin-Siena head coach Brandon LaRocco said. “He has bought into what we are all about.”

Parlett did most of his damage in the second half. The slippery athlete racked up 193 yards after the halftime break, against a defense that tried to follow his every move. Justin-Siena managed to pull within seven points with just 3:39 remaining in the contest, after Parlett pounced on a fumble caused by Robert Sangiacomo. Parlett then rushed around the left side of the offensive line for a 50-yard score.

“Caden has been an absolute stud since he walked on campus,” LaRocco said. “I met him in sixth grade and you could just tell that he has that ‘it’ factor. When we brought him up as a sophomore, he was undersized and tiny and he had it back then and that hasn’t changed.

“It was great to see him get some carries out of the backfield. I think we’ve tried to use him in different ways over the course of the year, but I think he’s forced our hand at this point at tailback. Just an inspiring performance in the second half. It was something else. There are some of those plays, like that’s just effort and the drive to just not be willing to go down. Some of those runs, there wasn’t much there, but he is so shifty. He is in terms of quickness as good as a kid that we've had in a long time. He is just so hard to tackle.”

Down the stretch, the defense stopped Fortuna’s power rushing game and gave Justin-Siena four shots to send the game into overtime. The drive was over in the blink of an eye, however. After an incomplete pass, a short run by Parlett, a negative-yardage reception by tight end Sangiacomo, and a fourth-down pass over the middle that missed its target, the Huskies knelt with the ball to close out the victory.

The Braves aren’t strangers to the next-man-up philosophy, and it was in action once again Friday evening.

Justin-Siena was without 10 athletes because of a number of ailments, including starting quarterback Zachary Zurowski. Holden Beers — brother of Hudson Beers, the Braves’ prolific starter the last two seasons — was thrust into the spotlight. The junior made some errors in his first varsity start but performed admirably under pressure, throwing for 92 yards on 7-of-21 passing with two interceptions.

Fortuna took advantage of one of those mistakes in the first quarter, as defensive end Titus Young intercepted a screen pass and returned it 60 yards for the opening score.

“Anytime you start a junior in their first varsity game, it’s always going to be a little like that. Even Hudson’s first game when he was a junior wasn’t spectacular,” LaRocco said. “I am proud of the way Holden played. That is a tough spot to be put into, and he handled it well. While there were certainly missed plays, he kept sticking in there and kept going after it. So I am really proud of the way he played and the effort he showed tonight.”

Justin-Siena never led in the contest, but kept within 14 points throughout and battled until the end. The Huskies have been a rushing power in the past and used a balance attack against the Braves. Four Fortuna rushers combined for 231 yards on 51 carries, Matt Letter leading the way with 82 yards on 20 attempts.

“I thought the first half — we were not very good in the first half. I think that is the best way to say it,” LaRocco said. “I try to warn these guys every time we come up here and say ‘You don't understand what you’re getting yourself into when you come and play these northern schools. These are tough kids and they’re gonna hit you in the mouth. They’re gonna keep doing it over and over again.

“I think it caught us by surprise early and we dug ourselves a hole. We dug ourselves into an unnecessary hole with the pick-six and the bad snap. We don’t need to do that. Those are things that are totally avoidable.”

Justin-Siena moves on to another strong challenge at 2 p.m. next Saturday when it travels to San Francisco to square off against Archbishop Riordan in the Crusaders’ season opener. Riordan resides in one of the top sports leagues in Northern California, the always-talent-laden West Catholic Athletic League.

“We’ve just got to clean up all the mental mistakes,” Parlett added. “We lost this game for ourselves and we made a lot of errors and all the errors we made were mental. That’s what we need to fix heading into next week. “Everyone here saw how close we are and I think once we clean up the errors, we’re going to see a massive improvement. Our coaches were telling us the biggest improvements you see are between Week 1 and Week 2. We should have everything ironed out and get a win next week.”

When a team gets all of its running backs involved, it can be trouble for the opponent. That was the case Friday night when visiting Vintage r…

Grizzlies score 5 TDs but get routed by Casa Grande, 70-34

The Napa High girls golf team shot a 308 on Silverado Resort and Spa’s South Course, but needed only to have a full team to win as visiting So…