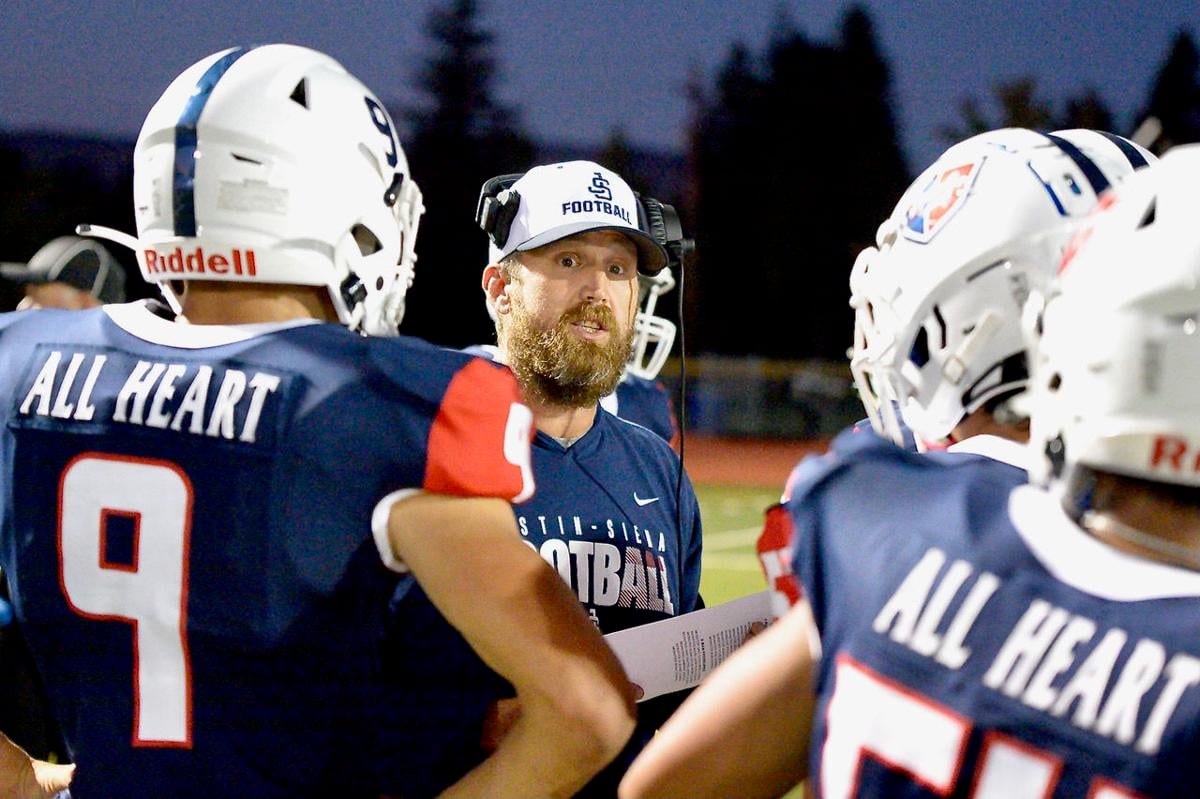 Justin-Siena head coach Brandon LaRocco talks to his team as it hosts Saint Mary's on Sept. 10 at Dodd Stadium. 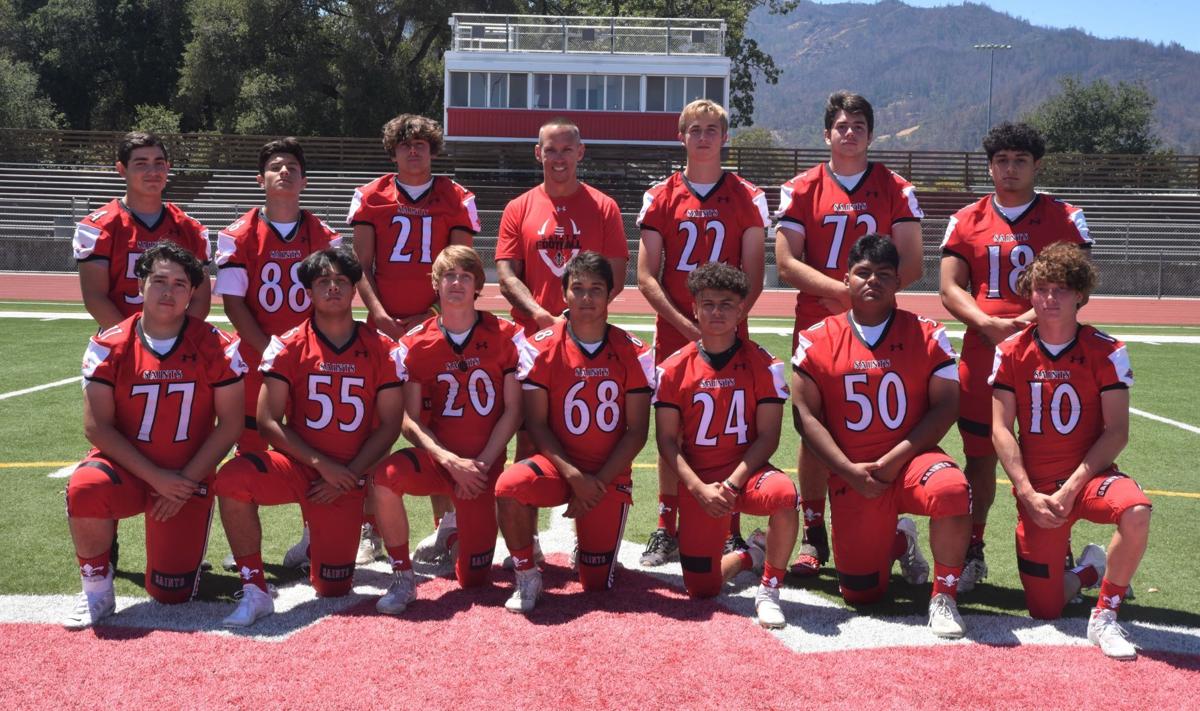 Thanksgiving is a day when most people’s digestive systems work overtime, with multiple trips to the buffet table and leftovers in the ensuing days.

The Justin-Siena and St. Helena High football teams will have worked up appetites by practicing earlier in the day, as they are looking to satisfy their hunger even more on Saturday. If they had their way, they’d be eating turkey wings on the 50-yard line to celebrate North Coast Section titles.

Justin-Siena (7-5), the No. 3 seed in the NCS Division 6 bracket, visits long-time powerhouse Salesian (8-2) at 1 p.m. in Richmond. The Braves outlasted Saint Mary’s of Albany, 31-13, in the opening round before winning by forfeit over No. 2 Arcata in the semifinals. The Tigers could not play because of a COVID-19 outbreak, saving Justin-Siena a five-hour bus ride to Humboldt County. Salesian, the No. 1 seed, had a first-round bye and doubled up Middletown 42-21 in the semifinals.

Here are a couple subplots heading into Saturday to whet your palates:

In 1977, some of the popular TV shows included Laverne & Shirley, Happy Days, Three’s Company, Charlie’s Angels, All in the Family, and Little House on the Prairie and Alice.

That season, the Saints defeated Ferndale 22-14 in overtime for the NCS Class A title. If you are looking for even more history, the Saints defeated St. Vincent de Paul 41-20 to reach the championship game. Having covered the Upvalley beat for 11 years, I know first-hand how much a title would mean to the St. Helena community. The Saints were on the doorstep of the title in 2014. That team went 12-2, falling to Salesian 14-7 in the championship game on a drizzly night at Alhambra High in Martinez.

I received an e-mail on Sunday from a member of the 1977 team. In the interest of that person’s privacy and not knowing if he wants his identity revealed, I won’t mention him by name. However, that person strongly suggested to me that he was in the process of getting a group of former teammates together to be present at the game to pass the torch if the Saints defeat the Mustangs.

I guess you can say it would be channeling the 1972 Miami Dolphins, but I don’t think this group of Saints alums would play Grumpy Old Men. After all, they still love their school. They have friends, family and acquaintances who have kids playing on the team. That love affair makes small-community high school athletics unique. Small towns often are not on outsiders’ radars. But when they win a title, chests puff out more, people walk taller, and they speak with glowing pride of their community — even if they are miles away from their old stomping grounds.

The entire St. Helena staff has Justin-Siena ties. St. Helena head coach Ian MacMillan is a 1997 Justin-Siena graduate and assistant coaches Rich Cotruvo, Steve Shifflett, Steve Vargus and Brendan Shanks all coached the Braves. Cotruvo was Justin-Siena’s head coach from 1997-2015, parting ways in April 2016 after 19 seasons. It was not amicable, but going into particulars would not benefit anyone.

Cotruvo was the longest tenured head coach in Napa Valley high school football history, leading the Braves to six section titles and eight section title game appearances. Most of all, Cotruvo changed a losing culture when he took over in 1997. Shifflett, Vargus, Shanks and MacMillan contributed to those titles on some level for different periods of time. Leading the Saints to a title would add another notch in their belts.

Shifflett and Vargus joined the Saints’ staff when current athletic director Brandon Farrell was still the head coach. MacMillan persuaded them to stay and lured in Cotruvo and Shanks to join him.

No more than 48 hours after Cotruvo was ushered off stage left, Brandon LaRocco was named the Braves’ next head coach. LaRocco graduated in 1998 from Justin and played on Cotruvo’s 1997 team, which went 4-6 but showed signs that better days were ahead. LaRocco was a JV assistant for three years and varsity assistant for eight more while also being the Braves track and field coach from 2009-2013.

The Braves’ most recent section title came in 2014, when they beat Saint Mary’s 18-10 in the Division 4 title game, so what would a section title mean for LaRocco? Would it lift him out of Cotruvo’s shadow? Personally, I don’t play that game. Knocking down one guy to pump up another benefits no one. Cotruvo’s legacy stands on its own and will be tough to beat. LaRocco, however, has proven himself and has the respect of his VVAL coaching peers. A section title would only boost his impressive resume.

Justin-Siena head coach Brandon LaRocco talks to his team as it hosts Saint Mary's on Sept. 10 at Dodd Stadium.