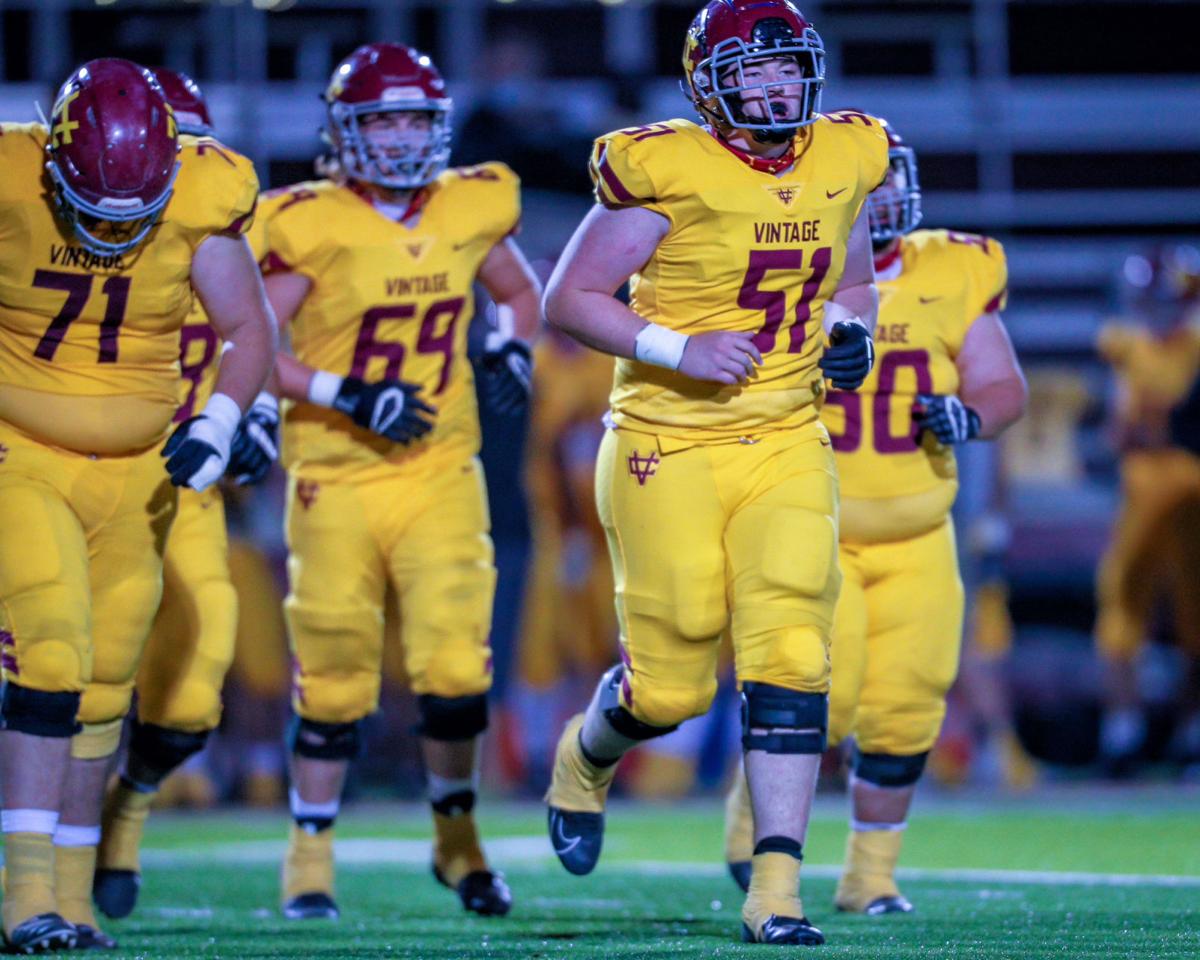 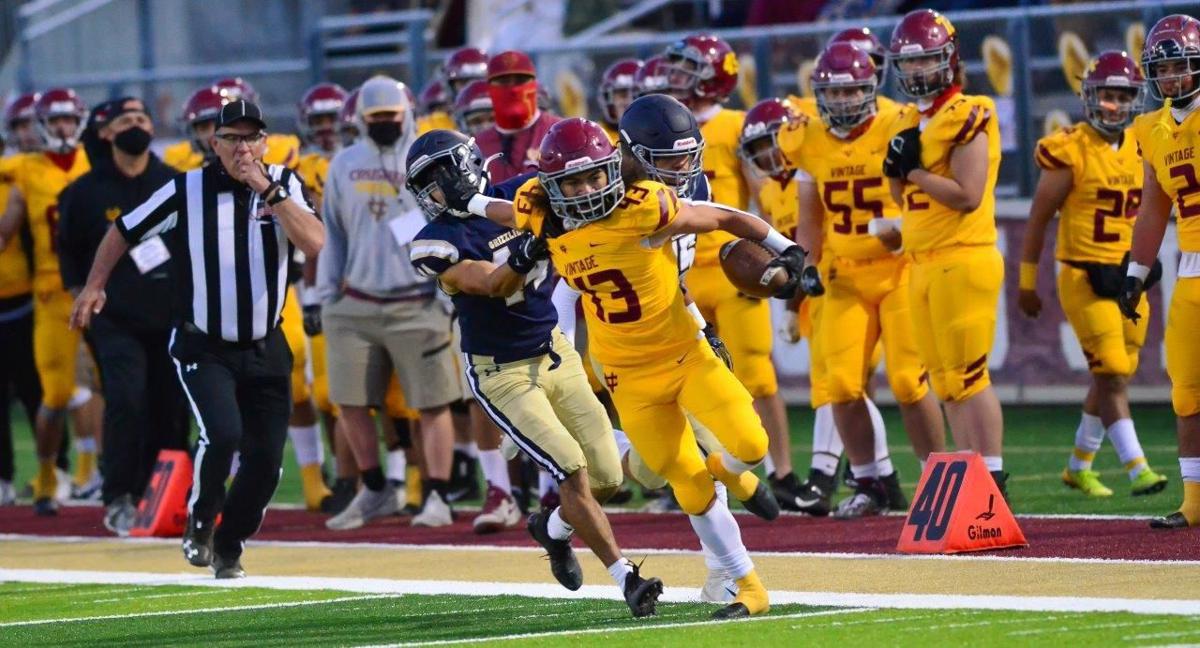 Have you ever watched a movie or documentary that left you wanting more? Maybe it’s the good guy humbling the bad guy and you want to see where life takes both of them thereafter.

Maybe you’ve been to an all-you-can-eat buffet that has American, Italian and Mexican food, but you wish they had Asian food as another option.

The Vintage High football team’s 2020-21 football season, moved to the spring because of the COVID-19 pandemic, epitomized that notion after the Crushers completed their truncated, unbeaten, Vine Valley Athletic League-only campaign with a 35-7 win over the crosstown rival Napa High in Big Game XLIX on Friday night at Memorial Stadium.

The last time the Crushers lost a league game, they were in a different section -- and league. That was on Oct. 27, 2017, when Vintage lost 24-21 to Wood at Vacaville High while a member of the Monticello Empire League and Sac-Joaquin Section.

Vintage, Napa and American Canyon joined the North Coast Section and VVAL in 2018. The Crushers have gone 18-0 against VVAL foes, outscoring them 321-27 this season on the way to a 6-0 record — with the first five going to a running clock by halftime. Napa knocked the Crushers on their heels early to take a 7-0 lead. But the Grizzlies also had two trips inside the Vintage 20-yard line come up empty. Those two instances changed the complexion of the game but not necessarily the outcome, as Vintage scored 35 unanswered points. The Crushers were simply that good. The Grizzlies, however, were the only team to make Vintage play 48 minutes without a running clock.

Since joining the VVAL, Napa is the only team to push the Crushers to the brink. In the 2019 Big Game, Vintage needed a last-minute touchdown to pull out a 26-20 win. The only other VVAL team to even remotely challenge Vintage in that span has been American Canyon. Vintage outlasted the Wolves 27-13 in 2017, 27-14 in 2018, and 28-14 in 2019. Remember when the Wolves boat-raced Vintage 42-13 in 2016, head coach Dylan Leach’s second game as Crushers head coach? That seems like prehistoric times.

Cynics will ask: Does the Crushers’ dominance reflect their greatness or the league’s weakness? You can make an argument for the latter, but this corner leans toward the former. Oh, I haven’t even addressed a pandemic that has taken lives, altered lives, etc. I’m no COVID expert and I won’t pass myself off as one, but things appear to be trickling back to normal as more people get vaccinated. Hopefully, the fall brings us a 10-game season with nonleague opponents and large crowds.

The pandemic has affected every high school sports program for a litany of reasons. The Crushers’ coaching staff deserves ample due for how they kept their players engaged with offseason conditioning as much as protocols allowed, which is not easy with the start of the season ranging from late August to early January to mid-March. Now the fall of 2021 seems like a 9-iron away.

While one had to appreciate the Crushers’ dominance, it left you longing for more. How would this team have done in a playoff format against a high-caliber foe?

“I would drive myself crazy if I thought about all of that,” Leach said after the game. “We thought on April 2 we were going to have an opportunity to play Cardinal Newman (5-0, 4-0 North Bay League). That was in the works but for whatever reason, neither Sonoma nor our own district would not allow us to do that. I would love to take this team and go forward.

“Normally, in this game, we would be gearing up for the next week. I feel bad for these kids that they don’t get that opportunity, but they weathered the storm and handled it well.”

Vintage won three playoff games over the course of 2018 and 2019, including an upset of No. 1 seed Antioch on the road. I’m not suggesting the Crushers win a section title. But knowing what I have seen before, I think Leach’s team makes postseason noise if given the chance.

Throughout the season, the Crushers dominated the line of scrimmage. They won in the margins with special teams. Their defense didn’t give an inch to opposing offenses. And their offense reminded me of a high school version of Joe Gibbs’ Washington Redskins. The offensive line has maulers that get running backs and quarterbacks into the second level, beyond linebackers. Those runners also did not go down after the first contact. Just to throw a changeup, Vintage’s offense had the multiplicity to spread teams out and beat them through the air or play power football within those formations.

The Crushers lapped the field in the VVAL as we presently sit. I don’t say that to disparage the other six teams because it reflects Vintage’s greatness more than it exposes the competitions’ shortcomings. I also make that statement knowing that all it takes is one screwy set of circumstances for things to change. Two things are equally true: a) VVAL foes have some work to do to catch the Crushers, and b) to use a hunting analogy, the prudent approach for the Crushers as far as nonleague scheduling is to hunt bigger game, which they are taking.

Crushers athletic director Cam Neal, a 1993 Vintage graduate who has Burgundy and Gold coursing through his veins as much as anyone I know, confirmed that Vintage is hunting bigger game. Those are my words, not his, but Neal echoed Leach’s sentiments about the aforementioned matchup.

“We were definitely interested in playing Cardinal Newman,” Neal said. “They are the defending state champions (in Div. III AA) and they are in an adjacent county. It would've been possible, but all six weeks of our schedule had a VVAL opponent.

For this matchup — or any other against a high-end foe — to work, Vintage would have had to cancel a VVAL game, Neal also confirmed. Translation, chasing another opponent and canceling a league game meant the integrity of the VVAL takes a jab that Neal and others were not willing to absorb.

“Even during COVID times, we have to honor our league opponents,” Neal said. “So, while we toyed with the idea for a day or two, it just wasn't going to work.”

The regularly scheduled fall 2021 season for the Crushers includes a road game Aug. 27 at San Ramon Valley, which ended Vintage’s 2018 season in the NCS playoffs, and a Sept. 3 home game against El Cerrito. Vintage defeated El Cerrito 29-9 in a 2019 nonleague road game.

“We'd love to play some North Bay teams like Rancho Cotate or Cardinal Newman. Maybe a Marin County team like Redwood or Marin Catholic,” Neal said. “When looking for nonleague opponents, we want to face programs that not only play good football and help sharpen us for the league and post-season, but also are good partners for pulling off an event. ‘Friday Night Lights’ have a lot of moving parts and we need opponents that have their stuff together behind the scenes.”

Since the VVAL is currently a seven-team league, I would advocate adding Rancho Cotate to the league, making it eight teams. But that’s a conversation for another day.

In the meantime, the spring season leaves you longing for more. But if you’re a football fan, you’ll get your wish before too long.