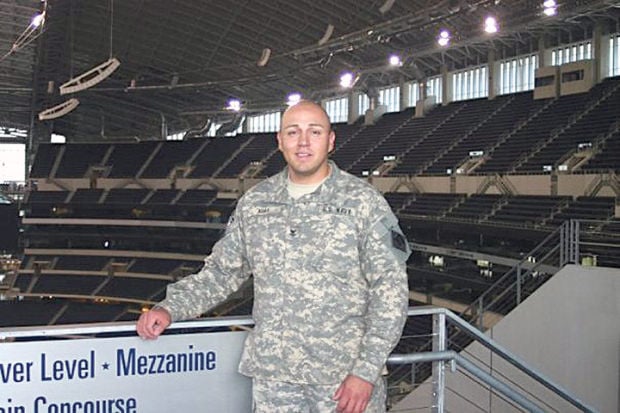 Mora poses in his U.S. Navy uniform at Cowboys Stadium in Arlington, Texas, where he now lives. Submitted photo 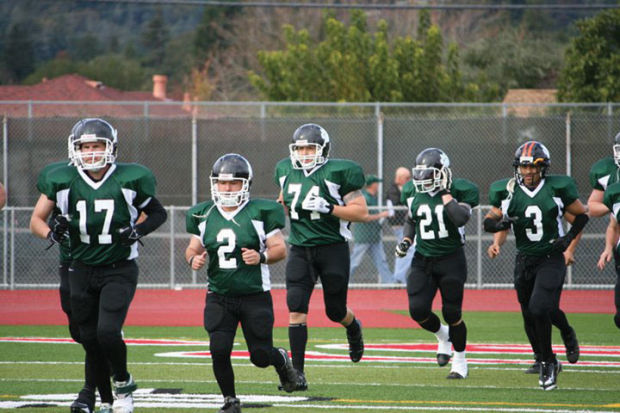 He was the heartbeat of a Calistoga High football team whose legacy will long be remembered.

Juan Mora is 14 years removed from being a starting center of a Wildcats team that reached the summit of the CIF North Coast Section Class B playoffs, capped by a 22-18 come-from-behind win over St. Bernard (Eureka) in 1999.

That victory marked the Wildcats’ first section title since 1978 and is actually the last time they won a postseason football game. The Wildcats have reached the playoffs four times since that season.

Mora’s life has seen many twists and turns since that time, of which he speaks with great reverence.

“I was part of a tradition that Calistoga kept up when I was in high school and as I left,” Mora said. “It was the tradition of what we knew as the ‘Gang Green.’ We were the small-town team. When I get together with old friends, that is one thing that I admire.”

Mora’s contributions went beyond being the linchpin of the line for an offense that averaged 259.9 yards rushing per game. The All-North Central League II and All-Napa County center’s leadership epitomized the iron will of that team. Back then, Mora exuded a strong voice of leadership.

Besides winning, Mora still speaks of the bonds the players and coaches had.

“I keep in contact with a lot of them,” Mora said. “I still talk to Ernesto (Marron), Leo (Leon), Ben Alfaro and Tony Campos. We reminisce about the good times we had. I also communicate with (former Calistoga assistant) coach Travis Bounsall. It’s been a good experience and I’m happy that I kept that friendship with them, as I got older.”

Time and distance removed from high school can change most anyone’s life. Mora’s life changed when he joined the United States Marines and later the Navy.

He has since received a Bachelor of Arts degree in criminal justice and later became a corrections officer for the state of Arizona.

Mora, who now lives in Arlington, Texas with his wife and two children, has recently gone back to school to pursue an Associate of Arts degree in sports science. In between all of that time, Mora served two tours of duty in the Iraq War.

“I don’t take things for granted like I used to when I was younger,” Mora said. “I’ve been in a Third World country. I’ve seen that a bathroom is a privilege. Over here in the United States, you can pull over to a gas station wherever you want. Also, I learned that not everyone in Iraq is a mean person. They live and try to survive just like we do over here in the United States.”

With exposure to most any combat situation comes the greater risk of being afflicted by PTSD (Post Traumatic Stress Disorder). Though seeing numerous forms of “Support the Troops” communications from civilians have an uplifting tone, Mora, by his own admission, still experiences PTSD.

The symptoms hit Mora particularly hard when he returned home, especially when thinking of his good friend dying in a Humvee explosion.

“PTSD is not something you can see, but within time it hits you hard,” Mora said. “You drink alcohol real fast and the next thing you know it hits you and you are on the floor. I’ve been going through counseling and classes to learn how to control things and learning how to fit back into society again. Going back to school, working out and being with my family have helped out a lot. PTSD is no joke. I’m happy that the military has taken a step forward and is helping out those coming back.”

In addition to the military being more proactive of addressing the problem as more information continues to be gathered, Mora himself has become more forthright and constructive about addressing his PTSD.

Mora is not seeking sympathetic thoughts from others, but hopes that his newly found constructive ways of handling PTSD can help others that have the same condition.

“At first, I was one of those macho men that believed you were trained not to show any kind of weakness,” Mora said. “I attacked it by drinking alcohol, and pushing my family away was the best way to do it. Instead it was the wrong way to do it. Now that I’m tackling it, I’m able to talk to people about my experience. It helps me to talk about it by taking pounds off my chest.”

Mora admitted that initially humbling himself was difficult, as well as realizing that the same macho that might benefit a soldier or a football player does not work when addressing PTSD.

“I really don’t know how to explain it,” Mora said. “I tried many ways in my own way to accept it. Even now, I sometimes get nightmares, cold sweats and flashbacks. It’s weird because I see war movies and I can relate to what’s going on. Sometimes I feel like I can take a breath and I’m OK, and other times I have to go for a jog. Now I know I can communicate with family members in Calistoga as well as my wife and two kids.”

Mora considers his wife, mother and children to be his security blanket.

“From the beginning, it’s always been my mother,” he said. “I was raised by a single parent. She raised three boys. She was there from the beginning. My mother was my big influence. She’s my hero. She’s everything I always admired, because to have that much power to raise three boys and put up with all of that boy stuff is a big thing.

“There’s also my wife. She’s been a huge support. We got married in 2006 after my first tour. She accepted everything I did and continues to do so. She understands me.”

Mora hopes his story will help others understand how to address PTSD.

Nick Andrews, a full-time varsity player since he was a freshman, is a 2020-21 Napa County Baseball Co-Player of the Year.

Mora poses in his U.S. Navy uniform at Cowboys Stadium in Arlington, Texas, where he now lives. Submitted photo