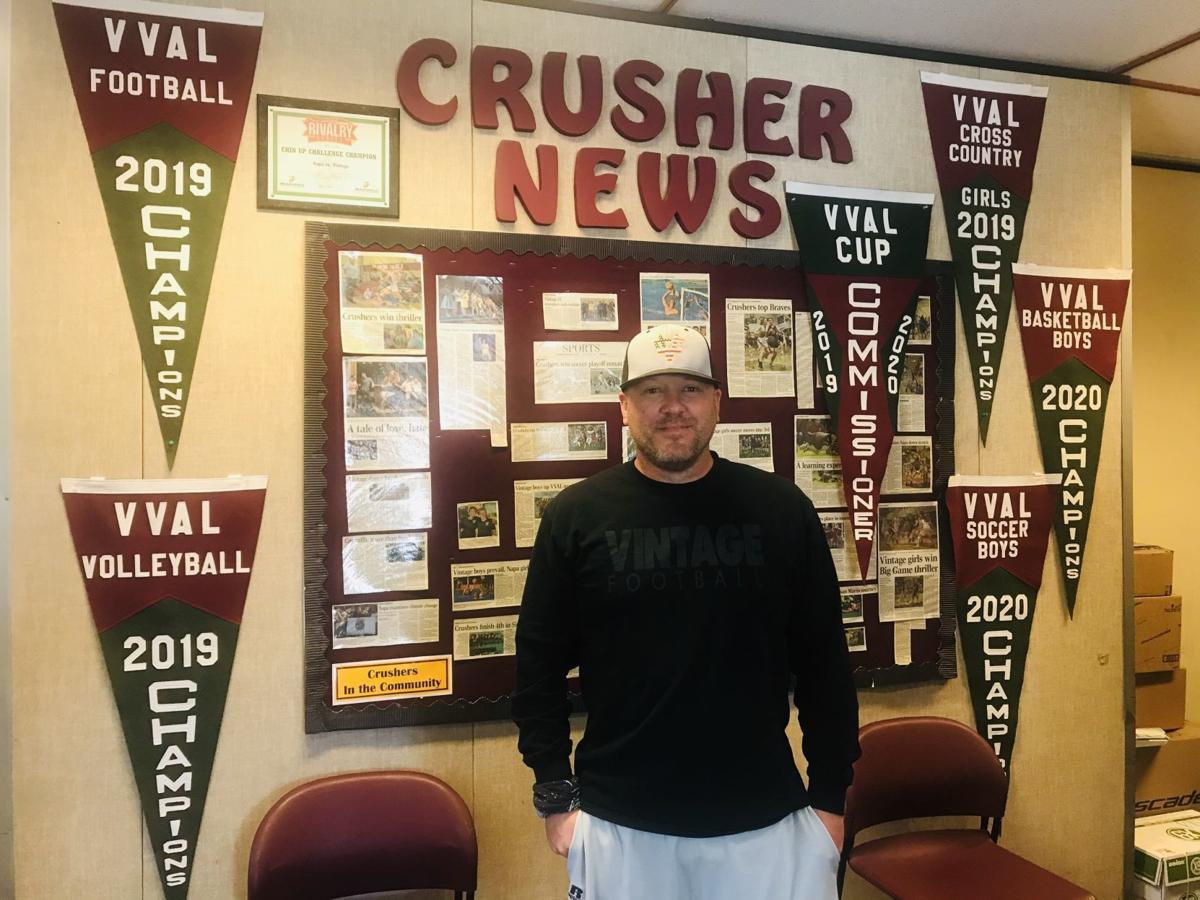 Vintage High School Athletic Director Cam Neal poses in his office, with the five Vine Valley Athletic League pennants the school won in 2019-20 surrounding the bulletin board behind him. 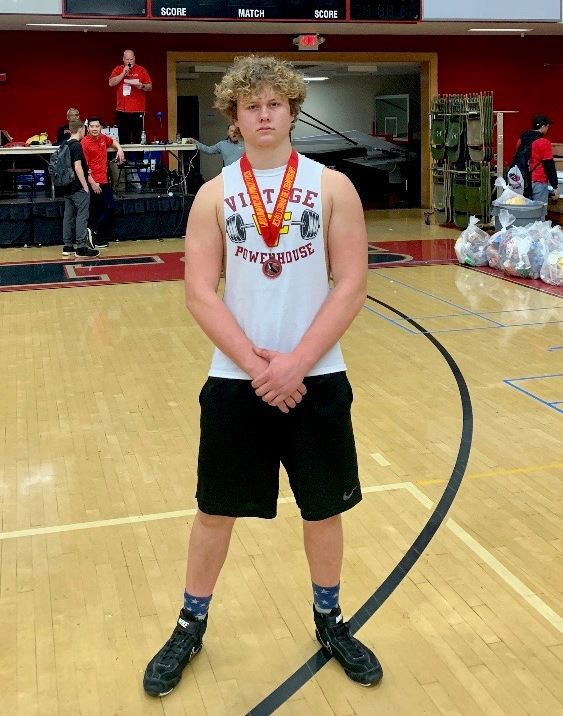 Vintage High senior Dominic Smith dons his medal after placing second in the North Coast Section Championships on Feb. 22 at James Logan High in Union City, qualifying for the state meet with the top-three finish. 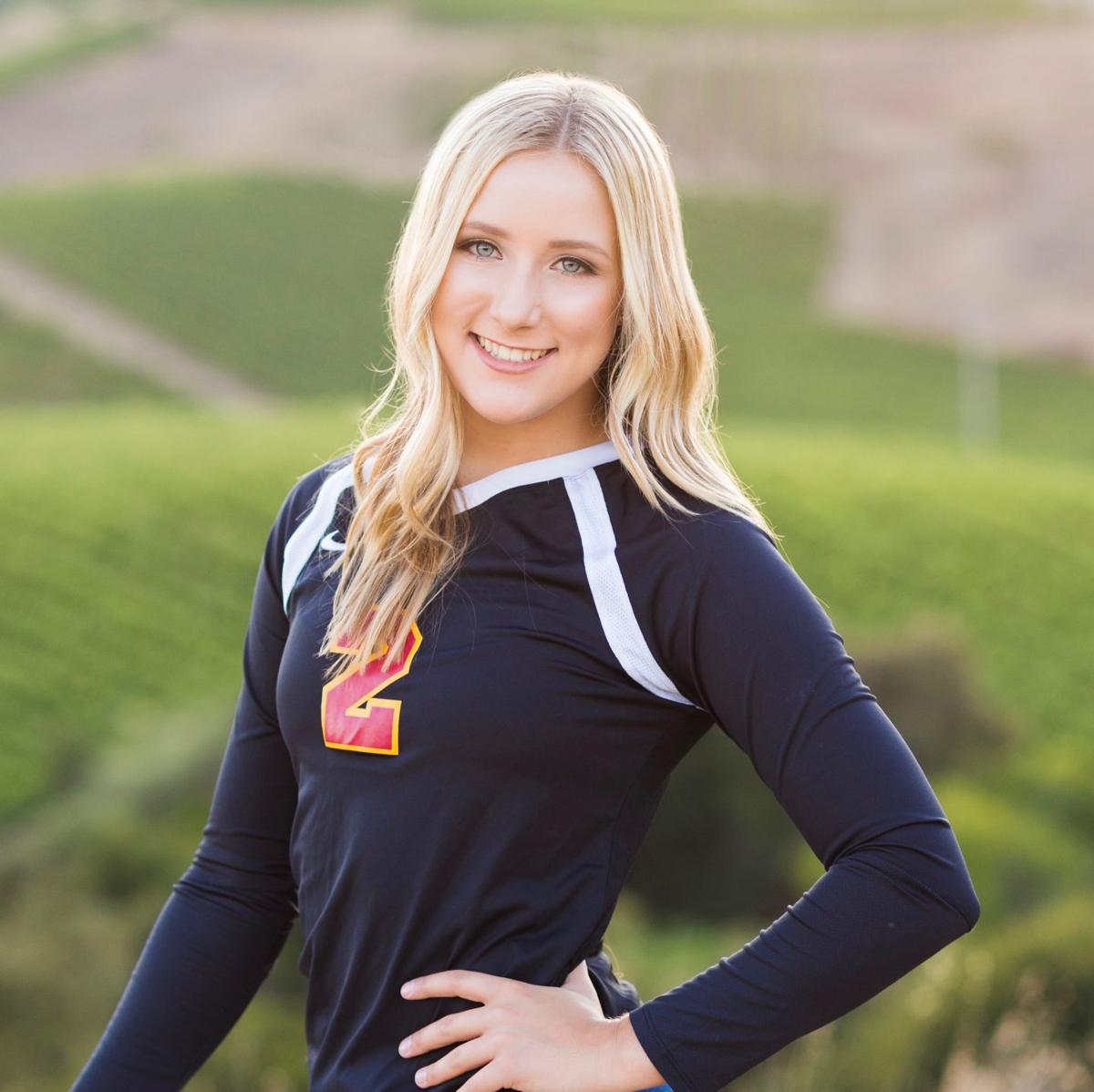 Having clinched it earlier than it wanted to, Vintage High School was recent presented with the Vine Valley Athletic League’s Commissioner’s Cup pennant for the second year in a row.

The award goes to the league member that accumulates the most points during the school year based on how its varsity teams place. Each first-place team earns 7 points, second place 6 points, third place 5 points, and so on.

Vintage saw several of its other sports also place in the top three in league play, teams and individuals advance to North Coast Section and state playoff competition, and a multitude of its athletes earn all-league if not Most Valuable Player honors.

“I continue to be very proud of the Vintage athletic program,” said Cam Neal, who just finished his 10th year as the school’s athletic director. “We have stellar student athletes, gifted coaches, supportive administration, and tremendous backing from our families and alumni. It’s very humbling to be in my position and I don’t take it lightly.

They may have had more had the spring season not been cut short due to the COVID-19 pandemic. “Having the spring season taken away was a gut punch,” Neal said. “We felt like we had some very talented teams and individuals that were looking to finish the year strong. I’d be lying if I said we were anything short of anxious to get back to work this upcoming school year.

“That said, there are still many questions about what everything’s going to look like in 2020-21, and not many answers as of yet. All we can do is stay ready and be prepared to hit the ground running when given the green light. I know a lot of people are working hard to make sure the athletes in our county (and beyond) have an opportunity to compete in some capacity.”

The California Interscholastic Federation issued the following press release on Friday regarding 2020 fall sports and return to physical activity and training:

“The CIF believes education-based athletics and all co-curricular activities are essential to the physical, mental, and social well-being of students and realizes the impact and challenges that COVID-19 has caused for our member schools and education-based athletics. We continue to monitor the directives and guidelines released from the governor’s office, the California Department of Education, and state and county health departments and agencies as these directives and guidelines are followed by our member schools and school districts when they are planning when and how to reopen school this fall.

“As our member schools begin planning for the reopening of school, the CIF, in collaboration with our 10 sections, will be determining by July 20 if fall sports will continue as currently scheduled. The CIF is prepared to offer alternative calendars if it is determined by July 20 that fall sports may not start as scheduled due to ongoing public health and safety concerns. In anticipation of our student-athletes’ return to physical activity, the CIF is providing several resources to assist our member schools and student-athletes while recognizing our obligation to the health and safety of all involved.”

Regarding expected delays in obtaining appointments for students to get pre-participation physical examinations, the CIF said, governing boards of school districts and private schools may elect to provide a one-time, temporary waiver of Bylaw 503.G.

“This waiver will allow the student-athlete to participate in athletics for a maximum of 30 calendar days from their school’s first day of practice in that sport,” the release said. “Due to the impact of the COVID-19 virus, and the resulting financial impact on many families, a waiver of Bylaw 207 may be granted for a student who transfers to a new school during the first semester of the 2020-2021 school year when there is a demonstrated and verifiable hardship condition due to financial difficulties.

“As we look to the upcoming 2020-2021 school year and sports seasons, our main priority remains everyone’s ongoing health and safety during this challenging time.”

Vintage named multiple-sport standouts Dominic Smith and Maddie Klungel as its Male and Female Athletes of the Year.

Smith starred in three sports as a senior. In the fall, he was named All-VVAL as a lineman for a football team that won its second straight VVAL title and returned to the NCS semifinals.

Moving right into the grueling winter sport of wrestling, he compiled a 34-12 record while winning the VVAL title at 220 pounds and qualifying for the state meet with a second-place finish at the NCS Championships. That made him and his father, 1995 Vintage graduate Josh Smith, the only Crusher son-father duo to get to state in wrestling.

In track and field this spring, he won the discus at the only league meet the Crushers were able to have before getting shut down.

Smith plans to attend Santa Rosa Junior College this coming school year and wrestle and/or play football while beginning his studies toward becoming a firefighter.

Klungel will begin her NCAA Division I volleyball career at Cal State Northridge on a full-ride scholarship this fall after four varsity seasons as the starting setter for the Crushers. She was named All-VVAL every season, also receiving league MVP honors as a senior while leading Vintage to the league title. All four of her teams also qualified for section playoff competition.

She also returned to the Vintage track and field program after a year away and won the triple jump, discus and shot put and anchored the winning 4x400 relay team during the only league meet the Crushers were able to compete in this year.

Prep Volleyball: Hanson committed to UC Irvine as walk on

Napa Valley Up & Comers: Keep an eye on Mendoza, Jackson, Larson next season

Calistoga's Ignacio Mendoza, Justin-Siena's Vincent Jackson and Napa's Mia Larson are featured in our 23rd edition of our Up & Comers series.

The American Canyon High School football team ceased offseason workouts due to a possible COVID-19 exposure that came back as a false alarm.

Vintage High School Athletic Director Cam Neal poses in his office, with the five Vine Valley Athletic League pennants the school won in 2019-20 surrounding the bulletin board behind him.

Vintage High senior Dominic Smith dons his medal after placing second in the North Coast Section Championships on Feb. 22 at James Logan High in Union City, qualifying for the state meet with the top-three finish.