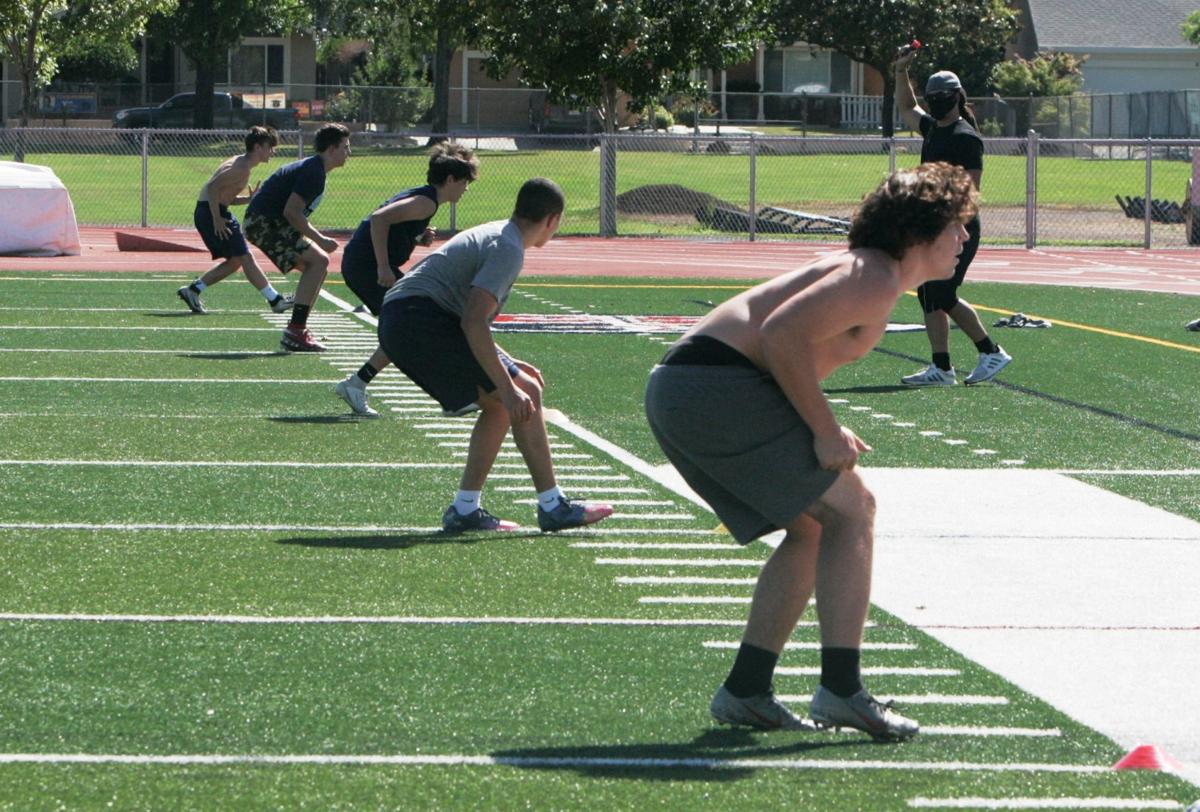 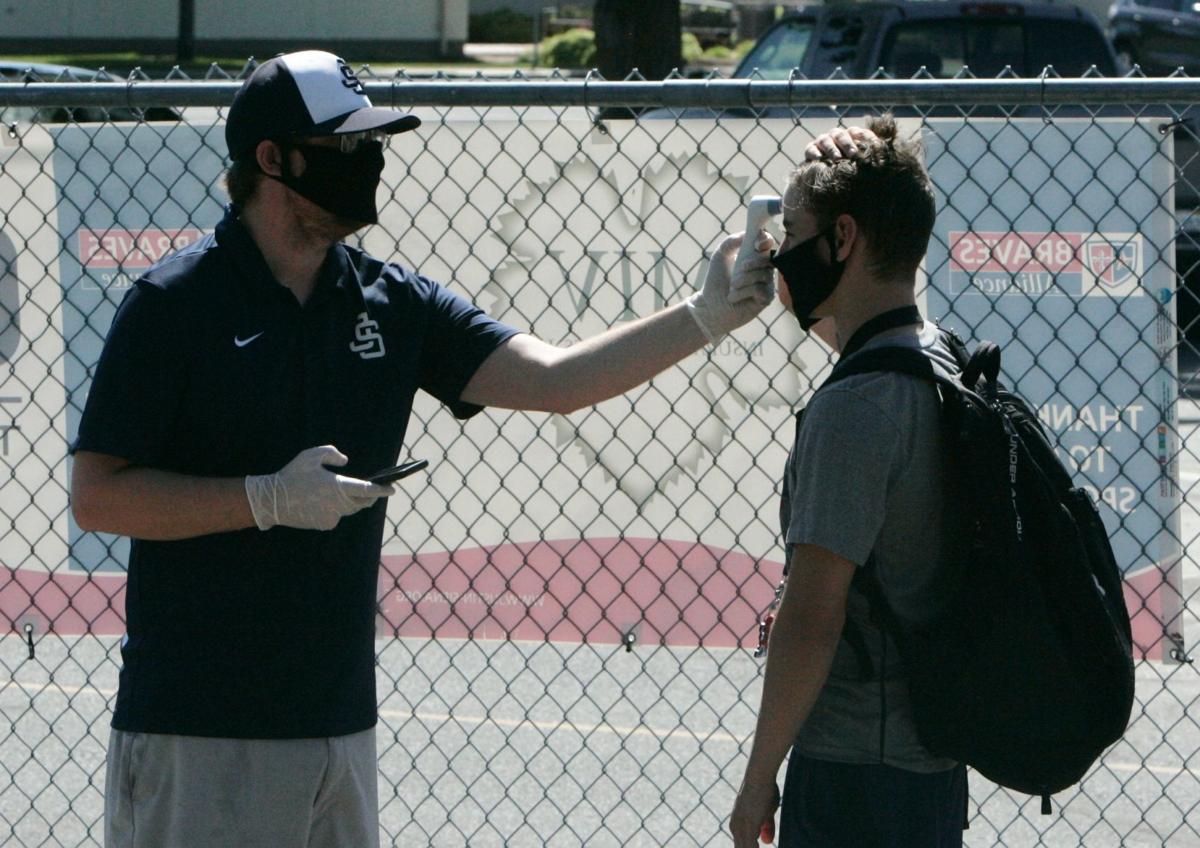 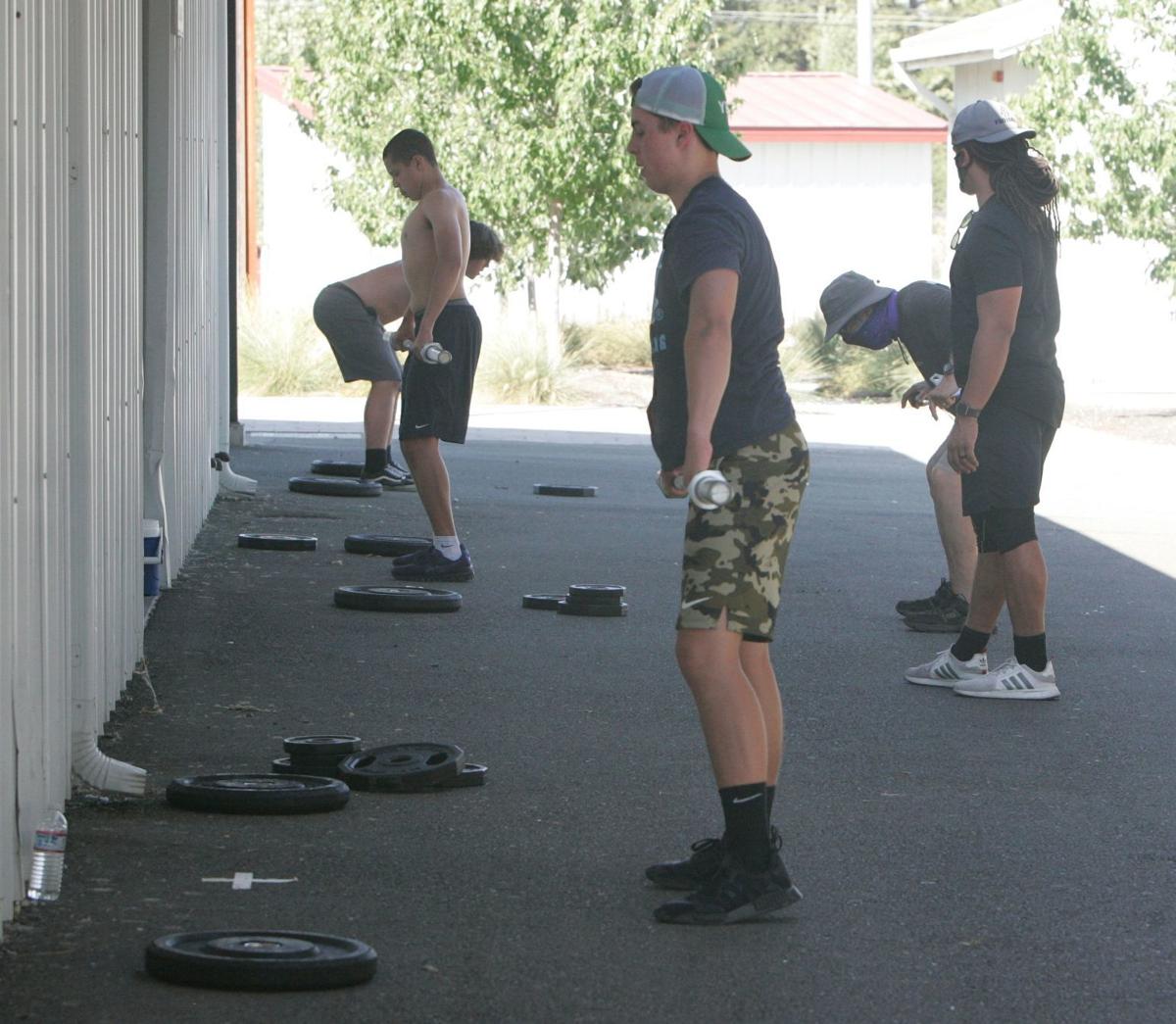 Cole Chatagnier, foreground, and Justin-Siena football teammates warm up for a lifting session outside the weight room while supervised by assistant coach Thomas Coakley, right, on Thursday

High school football teams all over the North Bay began holding summer workouts at the usual time of year last week, but they were hardly the usual practices at Justin-Siena.

Because of the ongoing COVID-19 pandemic, each 90-minute session was limited to six to eight players. There were no footballs, no water bottles that could be confused as somebody else’s, no contact of any kind such as high-fives, and weight training done outside the weight room.

Each player received a temperature check and a symptom check as they arrived.

Coaches have to wear masks the entire time. To keep them from being there for six hours, only two sessions were held each day, with two groups practicing Monday and Wednesday and another two practicing Tuesday and Thursday. Those groups were not to change for the first two-week period, which ends this Friday.

After each two-week period, players can be in a new group. If they are multiple-sport athletes for the Braves, they can spend the next two weeks training with their baseball or basketball team, whatever the case may be.

“It’s not normal football, but we’re still together, we’re on the field, getting back in shape, seeing each other, we’re talking, we’re having fun, we’re cracking jokes. So I appreciate that we’re able to do that kind of stuff,” said Justin-Siena head coach Brandon LaRocco. “We’ve been trying to do some basic feel work, getting used to doing the movements again.

“I think three months of being home, everyone works out differently. Some kids are really motivated on their own and some kids need to have that motivation and need us there pressing them. Everyone’s come back in a different level of shape, so it’s trying to find a way to get everyone a workout without working out the kids that did a lot of good work but working out the kids that maybe didn’t have as much time to do the stuff they wanted to do.”

The workouts look more like an exercise class than a football practice.

“We have a station circuit out on the field where each kid is 10 yards apart and has two cones and is doing basic agility- and plyometric-type stuff,” LaRocco explained. “We also work on backpedaling and stances, stuff that’s football-related but doesn’t require them to touch somebody else.

“We’ll do a modified circuit lift (outside the weight room) to really hammer those body mechanics and movements down so when we can get back in the weight room we don’t have to spend as much time on that stuff.”

It’s also unusual for football players to not know exactly when they will play next. Justin-Siena’s first scheduled game is Sept. 12 at Archbishop Riordan in San Francisco. But no football team will know if it will have a season in the fall, later or at all until the California Interscholastic Federation makes a statement on July 20.

“The most challenging part has been not knowing what the next step is,” said LaRocco, who has been assisted during the summer by offensive coordinator Tyler Streblow, strength and conditioning coach Edd Ghiringhelli and assistants Thomas “TC” Coakley, Diano Pachote and Jake Cremen.

“Tyler and I started planning for a comeback six weeks ago, building the structure and the protocol and then communicating that with parents and everyone that’s involved. That’s really important because you want people to feel like they’re sending their kids somewhere safe. They know we’re taking this seriously and putting steps in place to protect our kids as much as we can under the current circumstances.

“Building that has been the hardest part because we were the first one in the area to get there and we’re doing it from scratch. I think the kids for the most part are happy to be out here. When you haven’t run or lifted in three months, you get a little tired, but outside of that they’ve responded really well.”

Ghiringhelli has been coaching strength and training at Justin-Siena for 45 years.

“Right now all I’m working on is movement patterns and body mechanics – making sure people are doing stuff right, not worrying about how much load’s on the bar. Once you get the mechanics down, then loads come easy,” he said.

The spring program so crucial for a small program like Justin-Siena’s has been limited to video conferencing to prevent the spread of coronavirus.

“Coach Streblow and I ran a six-episode ‘Football 101 School,’ an hour and a half per session, because a lot of kids don’t come here with a massive amount of football background. They’re learning the game, so it was to engage them, get information to them. We took the time to really go over install and scheme, and teaching the structure of offense and defense. It’s hard doing it electronically for the kids, doing Zoom for classes and then for football after school, but they’ve done a good job.

“My approach is ‘Let’s move forward like we expect to start when we’re (scheduled) to and if we hear otherwise, we can adjust. You can always adjust for a push but never adjust for an earlier start.”

They Braves won’t be doing any 7 on 7 passing camps this year, like the De La Salle one they’ve done in the past.

“Losing the reps hurts, but everybody’s in the same spot as we are,” LaRocco said. “It’s who can get the most out of it that’s going to be in a position to have a good season. So we’re just trying to do what we can do as much as possible.”

After graduating a talented group that included five college football commits, the Braves will be rebuilding around prolific senior quarterback Hudson Beers.

“We lost three college wide receivers,” LaRocco said of Solomone Anitoni, Blake Hoban and Miles Williams. “But if I look back at this time last year, the only guy that was proven out of those three was Solomone. Miles and Blake hadn’t played a ton of offense at that point, so we didn’t really know what we had, so I expect the same thing this year. We have a group of talented kids that work hard, so we’ll see who those next guys are who step up. One thing we’re going to keeping doing around here is throw the ball around, so there are opportunities for guys to step into those roles, and I think we have guys ready to try to fill those shoes.”

LaRocco said he enjoys making it work when the usual routine is not an option.

“I like problem solving – figuring out how to build this within the context of what we’re allowed to do, capture what we can in that time period,” he said. “I think that’s characteristic of all football coaches: How do I maximize a situation where I don’t necessarily have the advantage over something; how do I get it back?”

“We have temperature checks and symptom checks every day and it’s all done through Google Docs so we fill it out and Sarah gets it in real time,” he said. “A lot of kudos goes to our athletic department. They really worked hard to put this together for us. I appreciate that our athletic department, our administration and our president pushed to get us back in a safe manner. I have a lot of pride in working for a school that recognizes not just the sports side of it but the mental and emotional heath of these kids, to be out here doing physical fitness with their friends, and leading the charge with that.”

Caden Parlett, a junior running back-cornerback, said Thursday that he missed out on his track and field season but has stayed in shape.

“I have a gym at my house, luckily, so I’ve been doing my own lifting and running up hills,” he said. “I was always hoping this (summer football) would happen. It’s nice to be back on the field for the first time in a few months. My brother Austin, who plays lacrosse, is home from college and I’ve been throwing the ball with him a little bit.

“The coaches are not making us run a bunch at the start. They’re just easing us into it, getting our muscles moving again. I don’t know if we’re going to have a full 10-game season or do less games. I’m just hoping to play at least a few games. We’re just doing what we can for now.”

Senior running back-linebacker Noah Young said he’s been working out with a personal trainer with agility and strength work.

Also a baseball player, Young has been working out with his brother Mark Young Jr., who pitched for the Napa Silverados independent pro baseball team last year.

“A lot of us went down to Silverado (Middle School) and tossed around the ball a little bit, so we’ve been waiting for things to officially start,” Noah Young added. “It’s going to be interesting season, especially if there’s no fans. You’ll be able to hear (each other) a lot more instead of just yelling. We’ll be a lot more focused, I’d say. But I definitely like seeing people out there.

“We had as good a team as we could have had last year. The goal is always to win. It’s never fun losing. Even if the season doesn’t happen, you want to be ready for the next thing anyway, so it’s good to be in shape.”

The CIF, the governing body for prep sports, will announce an outline of a sports schedule for the 2020-2021 academic year on Monday but it seems likely that sports such as football will be pushed to the winter or spring.

Cole Chatagnier, foreground, and Justin-Siena football teammates warm up for a lifting session outside the weight room while supervised by assistant coach Thomas Coakley, right, on Thursday