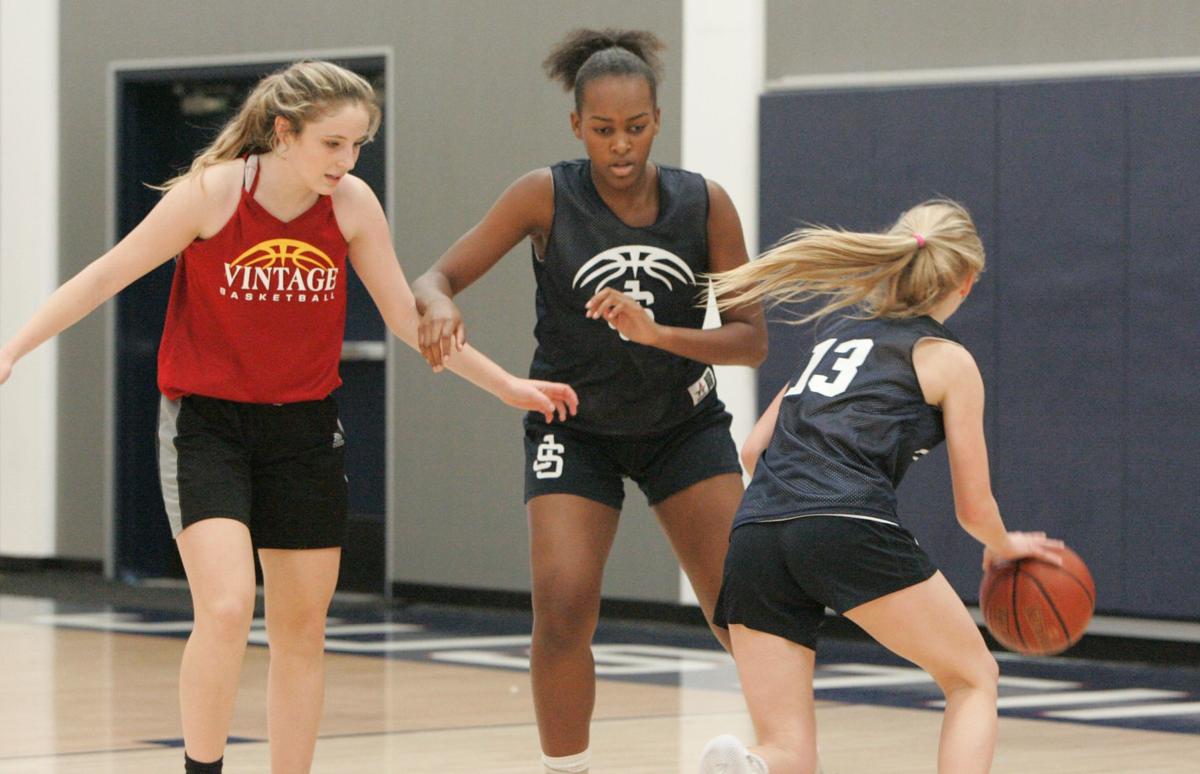 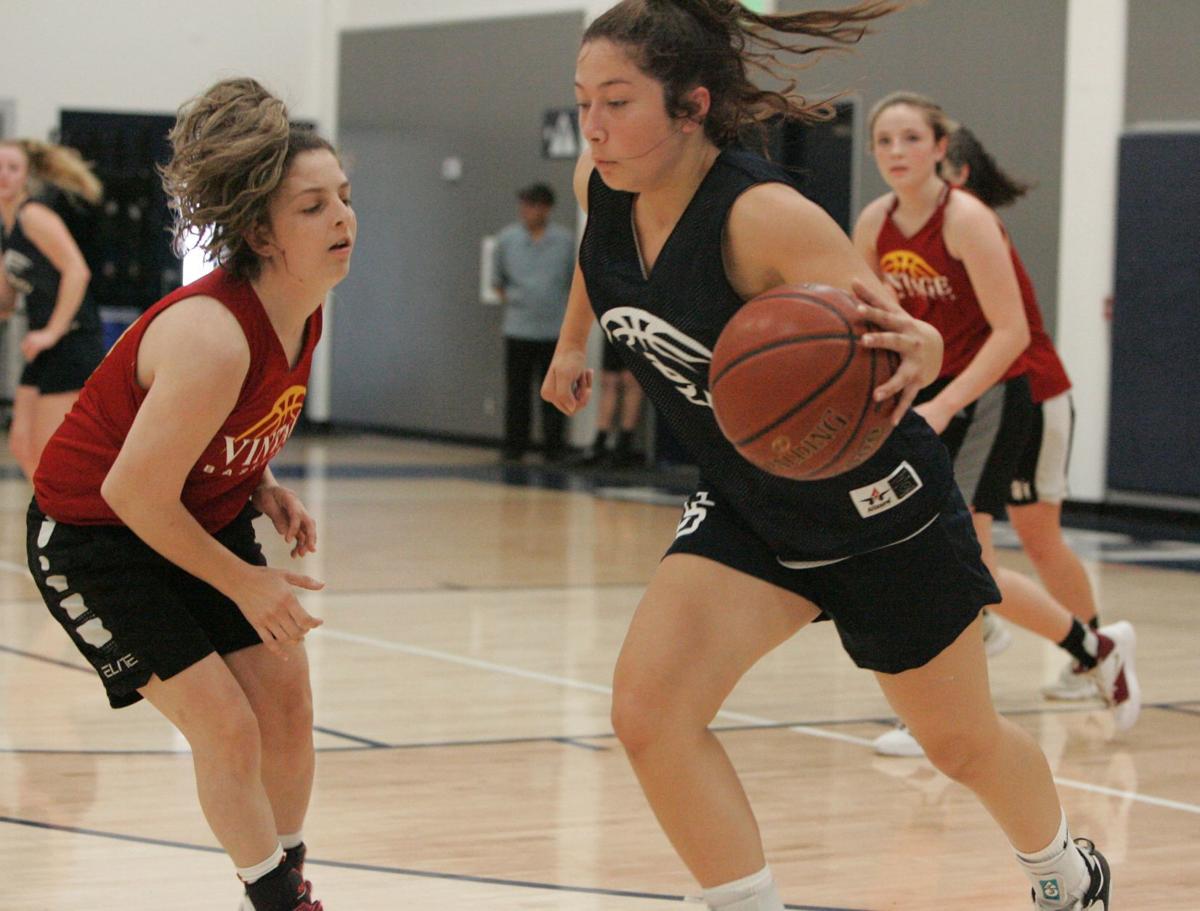 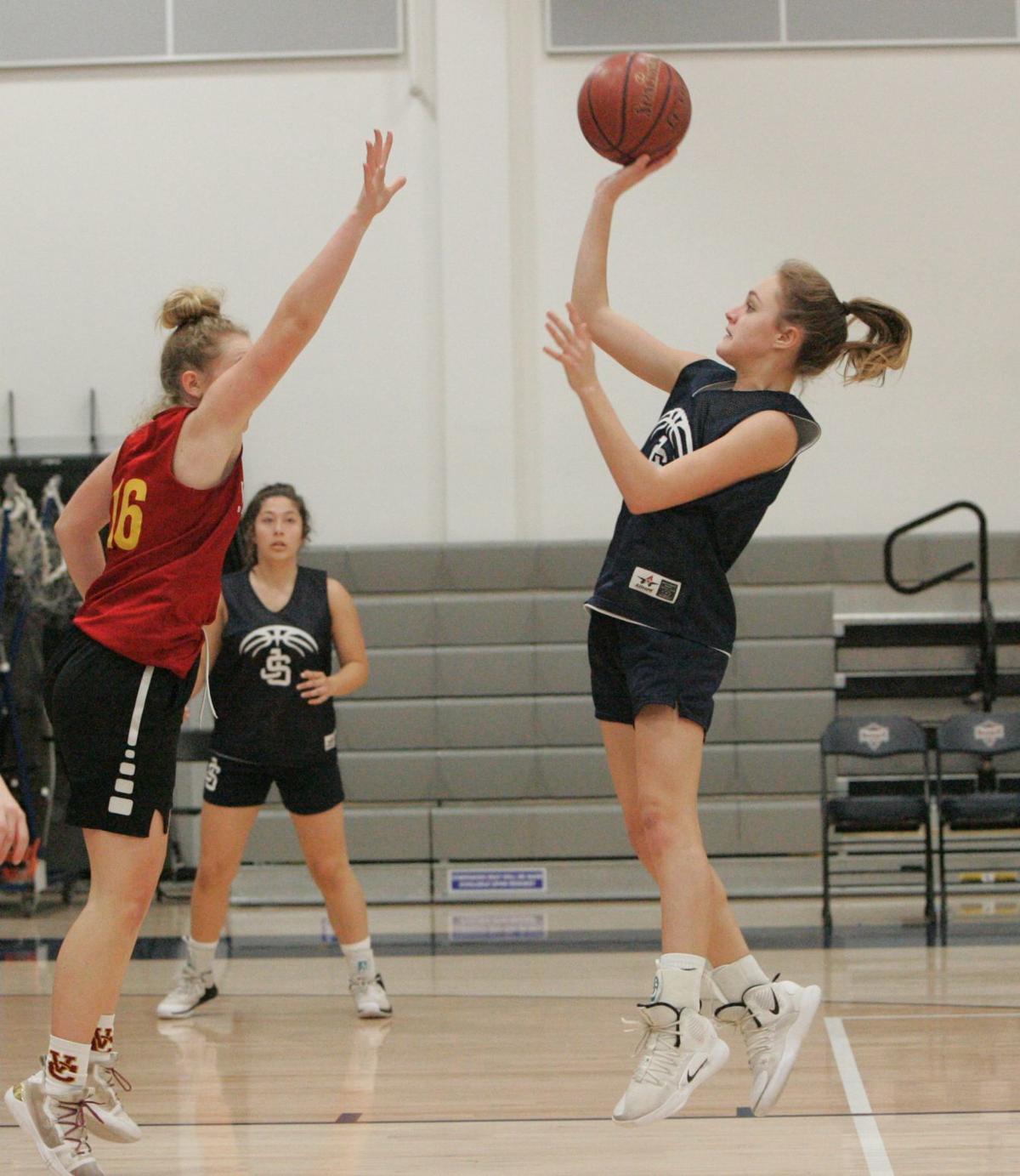 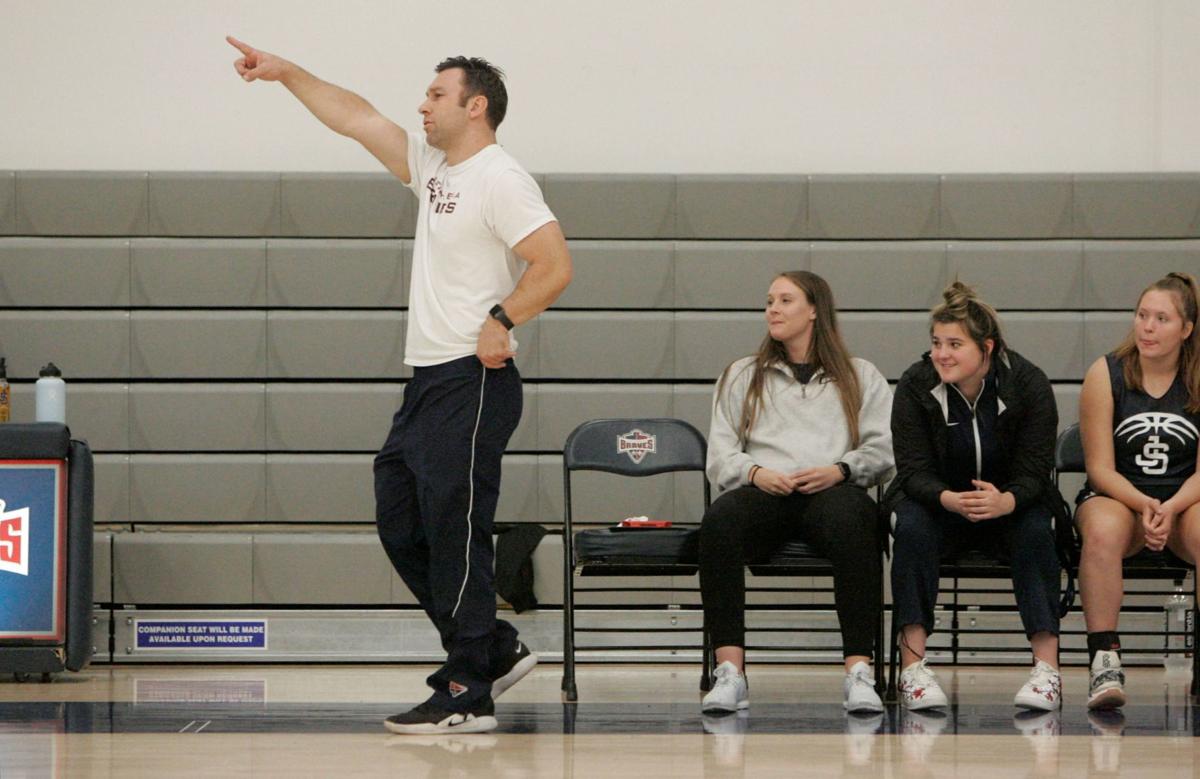 Justin-Siena girls basketball head coach Andy Bettencourt gestures to his players during a Justin-Siena Jamboree scrimmage against Vintage on Nov. 16. At far left on the bench is assistant coach Haley Cremen.

Now in his sixth season as the varsity head coach for Justin-Siena girls basketball, Andy Bettencourt has seen a lot of seniors move on and leave big gaps in the lineup.

But life goes on, and so have the Braves.

They are now captained by a junior and their only returning senior – both in their third years of varsity – and are tall, with two 6-footers and two 5-foot-10 players.

“This is definitely a young team in terms of varsity experience and, for sure, age,” Bettencourt said. “However, they bring a commitment and work ethic that have been refreshing and fun to be a part of. They want to be successful and are willing to put in the work to get that done.

“While we know there will be growing pains this year, we absolutely love where this team is headed – and they are so much fun to coach. We love their attitudes and the energy they bring to the gym on a daily basis. We are looking forward to a fun season.”

“We are so lucky to have Coach Haley on our coaching staff,” Bettencourt said. “Not only is she beloved by the team, but she is one heck of a coach. Our players improve continuously because of Haley’s expertise and ability to teach the game.”

Here are the Braves, listed by grade and alphabetically, with comments from Bettencourt:

Gabi Richardson: 6-foot senior center: A transfer from down the street at defending VVAL champion Vintage, she is one of two tallest players on the team. “We are so happy to have Gabi as a part of our program. She brings a leadership quality with the way she carries herself and goes about practice every day. She will provide some rebounding and an inside presence for us.”

Karlie Wells, 5-10 senior center, captain: The returning starter is in her third varsity season. “Karlie is a vital piece of what we do on offense and defense. She is a tough competitor and brings value as a player on the court as well as off the court. We are looking for strong rebounding and defense from her, as well as some scoring as well.”

Lili Galambos, 5-5 junior guard: Bettencourt said the varsity rookie is one of the hardest working players in the program. “She is committed to her game and has worked hard to get better. She continually makes the right play and is one of the smartest players on our team.”

Isabelle Wells, 5-5 junior guard: She’ll look to give the offense a boost in her first varsity season. “Belle has a great shooting stroke and we will definitely be relying on her to provide some shooting and ball handling off the bench. She brings a positive attitude and has continued to work hard to get better.”

Lexi Rosenbrand, 5-8 junior forward, captain: She is another returning starter in her third year of varsity. “Lexi has continually worked on her game and gets better and better. She has moved into more of a guard role for us this year and has really become a good outside shooter. We are definitely going to be relying on her for scoring and rebounding this year.”

Samai Wilson, 6-foot junior center: Bettencourt calls the varsity rookie is the most improved player in our program over the past three years. “She has gone from a freshman who had never played before to a junior who will be a varsity contributor. She plays as hard as anyone we have and is consistently getting better around the rim.”

Alyssa Curtola, 5-6 sophomore guard: In her second varsity season, she has taken over at point guard. “She is doing an incredible job. Her growth from her freshman year until now has been really good, and she has become a playmaker on offense. Defensively, she is tenacious and has a nose for the ball. She will be a major contributor for us.”

Charmaine Griffin, 5-7 sophomore guard: The varsity rookie joined the Braves this summer and immediately was an impact player. “She is our starting 2-guard and brings it on both ends of the floor. We are excited not only for the player she is now, but for the player she is becoming as she continues to work extremely hard on her game.”

Cassie Richardson, 5-9 sophomore forward: In her first varsity season, she is a “really hard worker who brings good skill and physicality to our team. She has a nice shot and is not afraid to mix it up under the basket. We are looking forward to a strong contribution from her this year.”

Isabella Wright, 5-10 sophomore forward: A returning varsity starter, she was the Register’s Napa County Newcomer of the Year and Second Team All-VVAL in 2018-19. “Isabella really burst on the scene for us late last season and became a scorer for us. As we go into this season, she continues to bring a great intensity and tenacity, and has improved her offensive game. She will be incredibly important to our success this season with her scoring, rebounding, and defense.”

Mary Heun, 5-7 freshman point guard: The team’s youngest player is way ahead of the curve. “Mary is incredibly coachable and is one of the fastest players in our program. She competes every single day and just gets better and better. She will be a contributor right away as a freshman and her ability to handle the ball and attack the basket will be a plus for our team.”

The Napa Christian girls basketball team is led by Breck Hearn, who recently signed with Pacific Union College for volleyball.

Justin-Siena girls basketball head coach Andy Bettencourt gestures to his players during a Justin-Siena Jamboree scrimmage against Vintage on Nov. 16. At far left on the bench is assistant coach Haley Cremen.