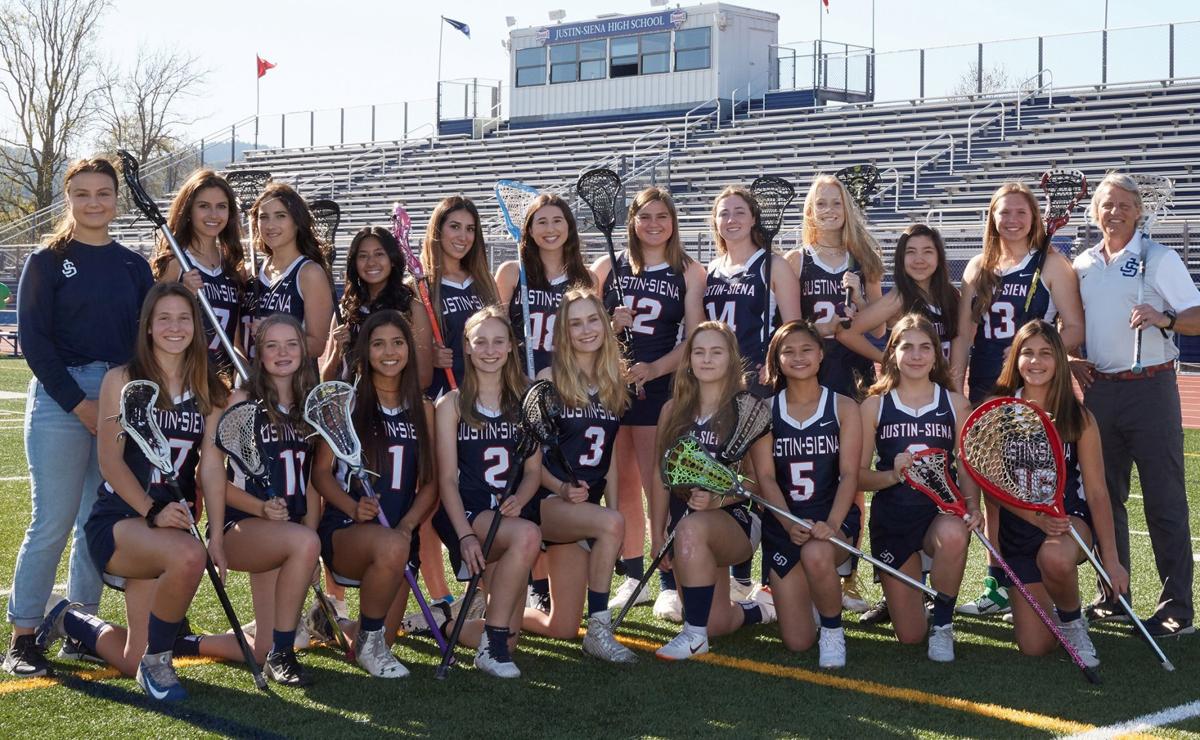 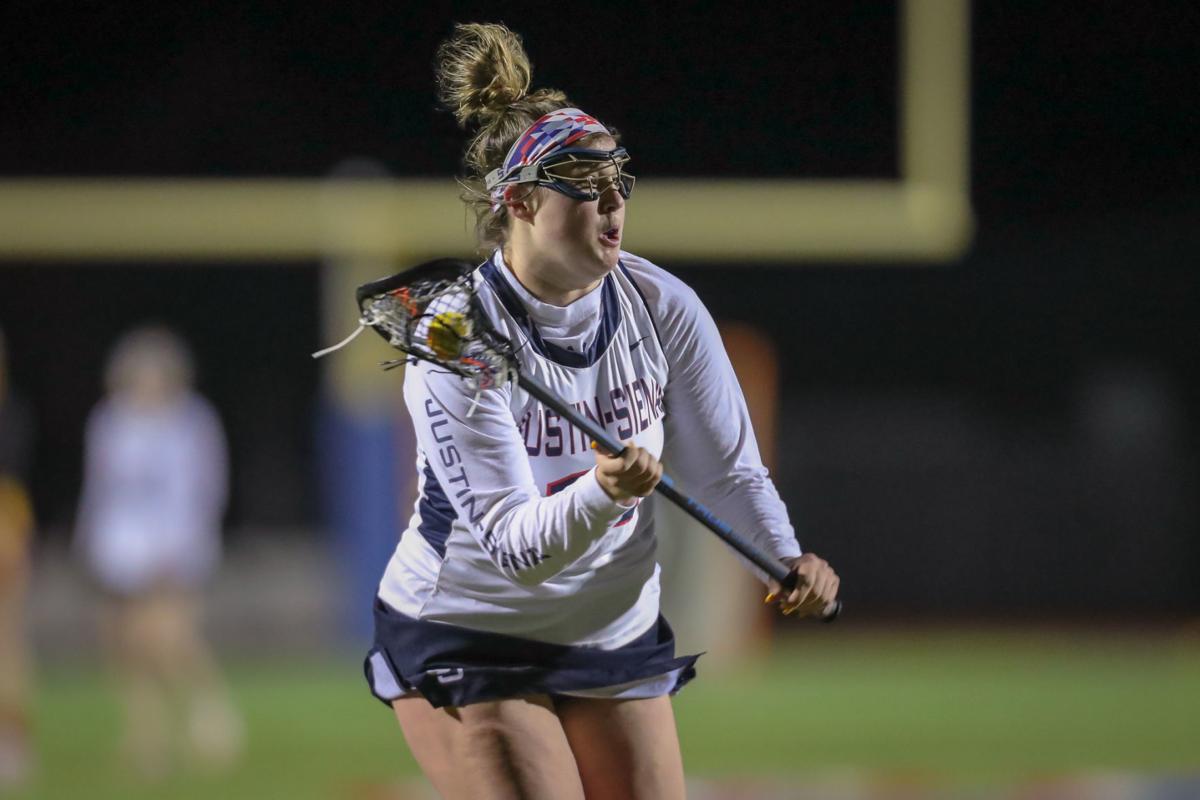 Justin-Siena's Karolina Wells gets ready to shoot against visiting Las Lomas on Feb. 28, 2019.

Last year was the best season in eight years of Justin-Siena girls lacrosse, the Braves finishing second out of eight teams in the new Vine Valley Athletic League.

They may have been even better than their 2014 squad, which finished fifth in the 12-team Marin County Athletic League.

Ten Braves graduated, however, including five of their top seven scorers, and head coach Noelle MacDougall left after four years at the helm.

Justin-Siena came back with a young team this year, with only four seniors. Of those, only Karolina “Karlie” Wells had more than two years of varsity experience, having been on the varsity since she was a freshman.

The Braves were fortunate to have Jon Edie as their new head coach, however. He was new to Justin-Siena but not the sport, having coached Napa Junior Lacrosse Club’s Force girls teams in the under-9 through high school age divisions since 2012. He is the girls director for the club, and has also coached boys in the past.

Edie started playing lacrosse in the eighth grade at The Haverford School outside Philadelphia and went on to play at Williams College in Williamstown, Mass., where he was team’s Most Valuable Player. He also played club lacrosse after college in Philadelphia and Boston.

His first Justin-Siena team was 1-3 before the COVID-19 pandemic forced all spring sports to be postponed and then canceled. The Braves had opened with an impressive 7-5 win at Northgate in Walnut Creek, before falling 12-9 to visiting University and 13-8 at home to Davis, and getting routed 18-3 by St. Francis at Sacramento’s Mather Sports Complex on March 7.

The Braves were supposed to visit former MCAL rival Marin Catholic on March 12, host Christian Brothers on March 13, and play road games against Campolindo on March 17, College Park on March 19 and San Marin on March 24 before opening VVAL play against Rancho Cotate.

“I know our best lacrosse was ahead of us,” Edie said. “We played four tough games before the shutdown, and had four more games against quality opponents before VVAL league games started. These contests would have no doubt readied us to be successful in league play.

“The girls were fired up to battle with the VVAL teams, and were especially looking forward to beginning local rivalries with both Napa and Vintage, and of course getting a rematch with (defending VVAL champion) Casa Grande. We all were confident about contending for the league championship, and the girls were super motivated to bring home the trophy.”

Edie was assisted by Vintage graduate Cailey Eade, and standout for the Force’s high school girls team a few years ago.

“She jumped in and was a big part of getting this team ready to compete,” Edie said.

Sixteen of the 20 Braves will be able to come back next spring.

“This year’s squad did not have very many players with substantial varsity experience compared to previous years, probably seven or eight,” Edie noted. “We also had five girls who had never played before, or hadn’t played for a few years. We will have five returning players who will be seniors next year.”

Wells finished third in goals (38) and fourth in assists (27) last year, when Justin-Siena went 9-3 in the VVAL and 12-8 overall, and was third in scoring (7) and first in assists (4) this season. Despite having far more experience than her teammates, she apparently tried to get them involved rather than be a ball hog.

“As the team captain, Karlie excelled both on the field and as a team leader. She not only has the most high school playing experience, but has been a mainstay of the offense the past few years,” said Edie. “Her strength, speed and stick skills made her a potent threat to dodge and score, and her tenacity and aggressiveness were imposing to our opponents.

“Karlie is a great mentor and motivator to her teammates and leads by example. She has one of the hardest shots I’ve seen at the high school level. The fact that she led the team in assists is a testament to how she has grown as a player. When she was covered tightly by a defender, or double teamed, she would often pass off to an open player instead of trying to power through and take a low-percentage shot. I think this shows maturity as a player; it definitely buys into the team concept.”

Edie said Wells will attend Purdue University and believes she is interested in pursuing club lacrosse.

He said Gahub was a “great surprise” this season.

“She worked hard in the offseason and was a starter on defense,” he said. “Her aggressiveness and tenacity were perfect for the position and, despite her smaller size, she measured up to all of the larger opposing attackers she faced – a true example of how hard work and effort can lead to success.

“Cielo was a pleasure to have on the field, always putting in the effort, and her lacrosse skills greatly improved from preseason until we were shut down. She was mostly an offensive player, but was both capable and willing to play any position asked of her.

Smith also played soccer this winter with Fischer, Guerrero, Janerico and Monteverdi. She started on offense but, like Guerrero, was a very well-rounded player who could fill any position.

“Her stick skills have really developed and we were seeing great things from her before the season was cut short. She is a multi-sport athlete and her physical skills were apparent on the lacrosse field. She was also a team leader and someone that I as a coach could rely on the help guide drills and lead warm-ups.

“These four seniors were a pleasure to coach and I feel so bad for them that their final season at Justin-Siena was cut short. I hope all of them continue to be involved in lacrosse at some level.”

Janerico led the Braves with 7 goals and 9 points during their four-game season – hardly surprising for someone who also led the girls cross country team in the fall and was a soccer standout this winter.

“It is easy to look at scoring as the metric to evaluate a player, but Olivia brings so much more to the table than just goals scored,” Edie said. “She led the team in ground balls, took the majority of draws, played solid defense, and rarely subbed out of games. She works as hard, if not harder than anyone else that I have coached, and puts out 100% effort, 100% of the time.

“Olivia puts in the work on and off the field, in season and in the offseason, and it is obvious why she excels in her other sports. She truly loves athletics and competing. We are fortunate that she is only a freshman and has three more years of Justin-Siena lacrosse. Her potential is unlimited, and she definitely is a player that will be attracting lots of interest from coaches at the next level.”

Another key freshman on this year’s squad was goalkeeper Ramsey, who came in with a couple of years of experience at the position with her Force team and the travel club LaxUhr. She came up huge in the season-opening win at Northgate by amassing 14 saves, 4 of them on free position shots.

“We were fortunate to have such a talented goalie come in as a freshman to coincide with Emily Heathcote’s graduation,” Edie said. “Alyssa is one of the few girls on the squad who plays lacrosse year-round and she has developed into a solid goalie. She is incredibly dependable, works hard to constantly improve her game, is very teachable and, most important for a goalie, has a short memory. If the opposing team scores, she lets it go and focuses on stopping the next shot.”

Although 20 varsity players was comparable to what most of the Braves’ opponents had, Edie said he didn’t have enough girls to field a junior varsity squad – meaning many of his varsity players would have been on the JV.

“We are trying to rebuild our numbers, and hope that the incoming freshman class brings forth good numbers of both experienced lacrosse players and girls interested in trying out for lacrosse,” Edie said. “A positive is that many returning players are multi-sport athletes – something we promote. While it is a challenge in that the winter sports athletes often miss the first week or so of the season, they arrive in good physical condition – albeit, often a little banged up.”

Napa High and Vintage had lacrosse teams for the first time this season, and their coaches were just starting to get to know their players. Despite coaching a nine-year-old program, Edie was in the same boat.

“As a new coach, I was finally getting comfortable knowing all the girls well and we were developing a good team chemistry,” he said. “I really hope the girls are able to get some lacrosse in this summer and I know they are all looking forward to the 2021 season.”

Justin-Siena's Karolina Wells gets ready to shoot against visiting Las Lomas on Feb. 28, 2019.