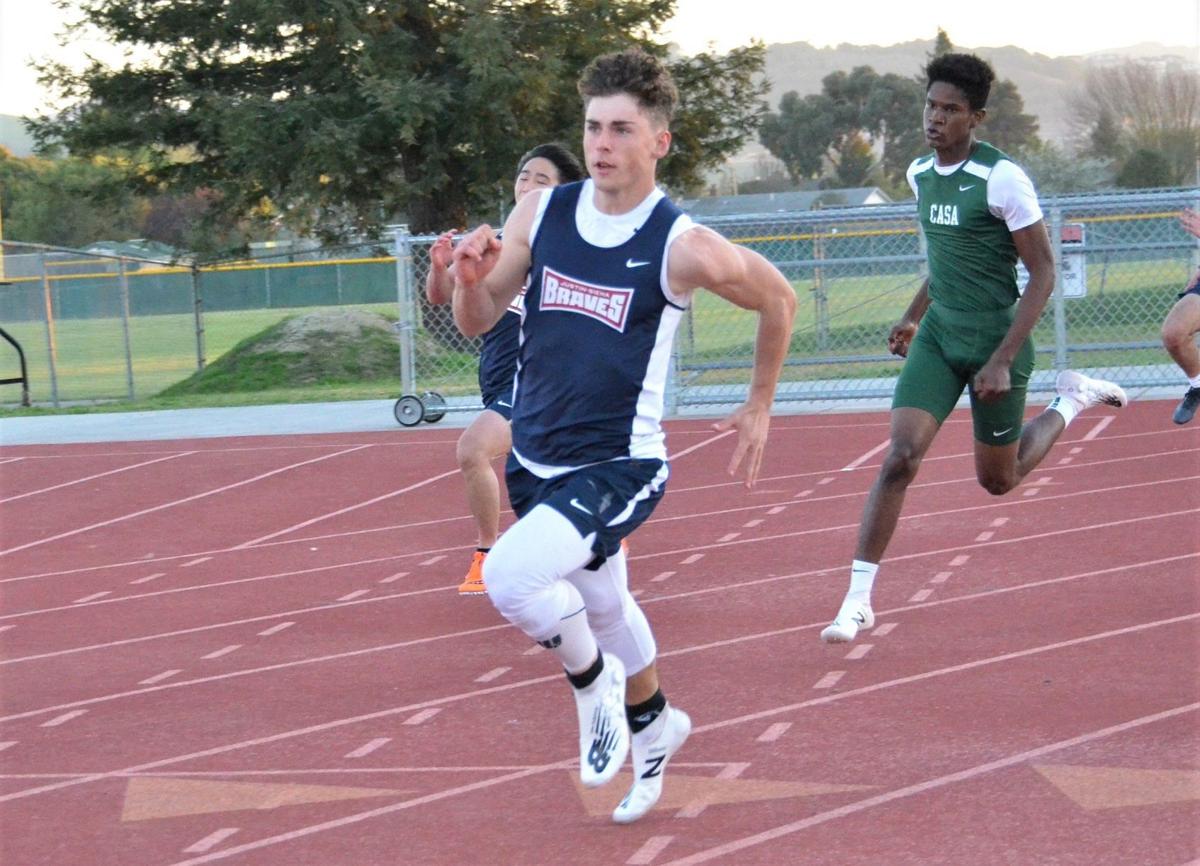 Justin-Siena's Blake Hoban rounds a turn in the varsity boys 200 meters against visiting American Canyon and Casa Grande on March 11. 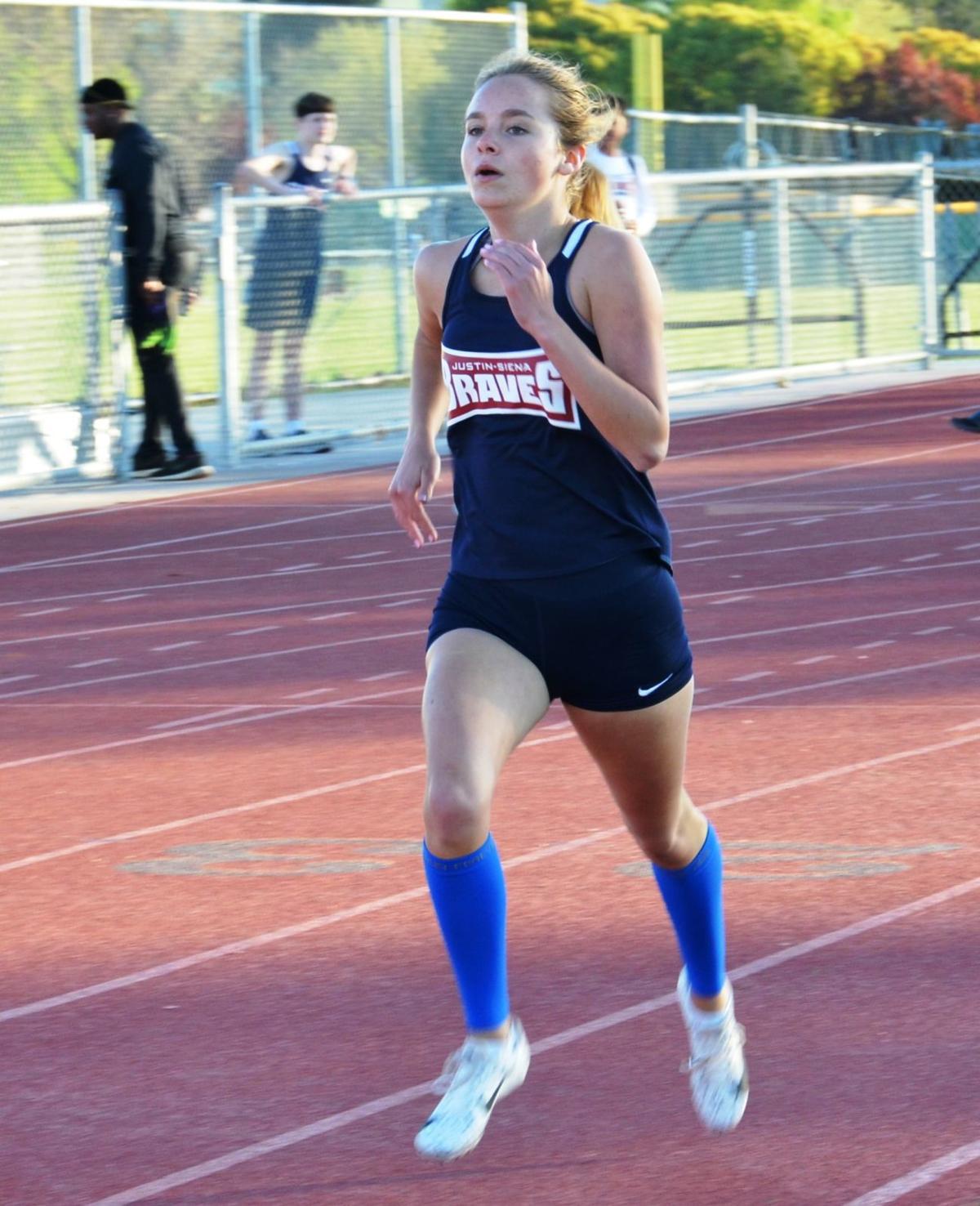 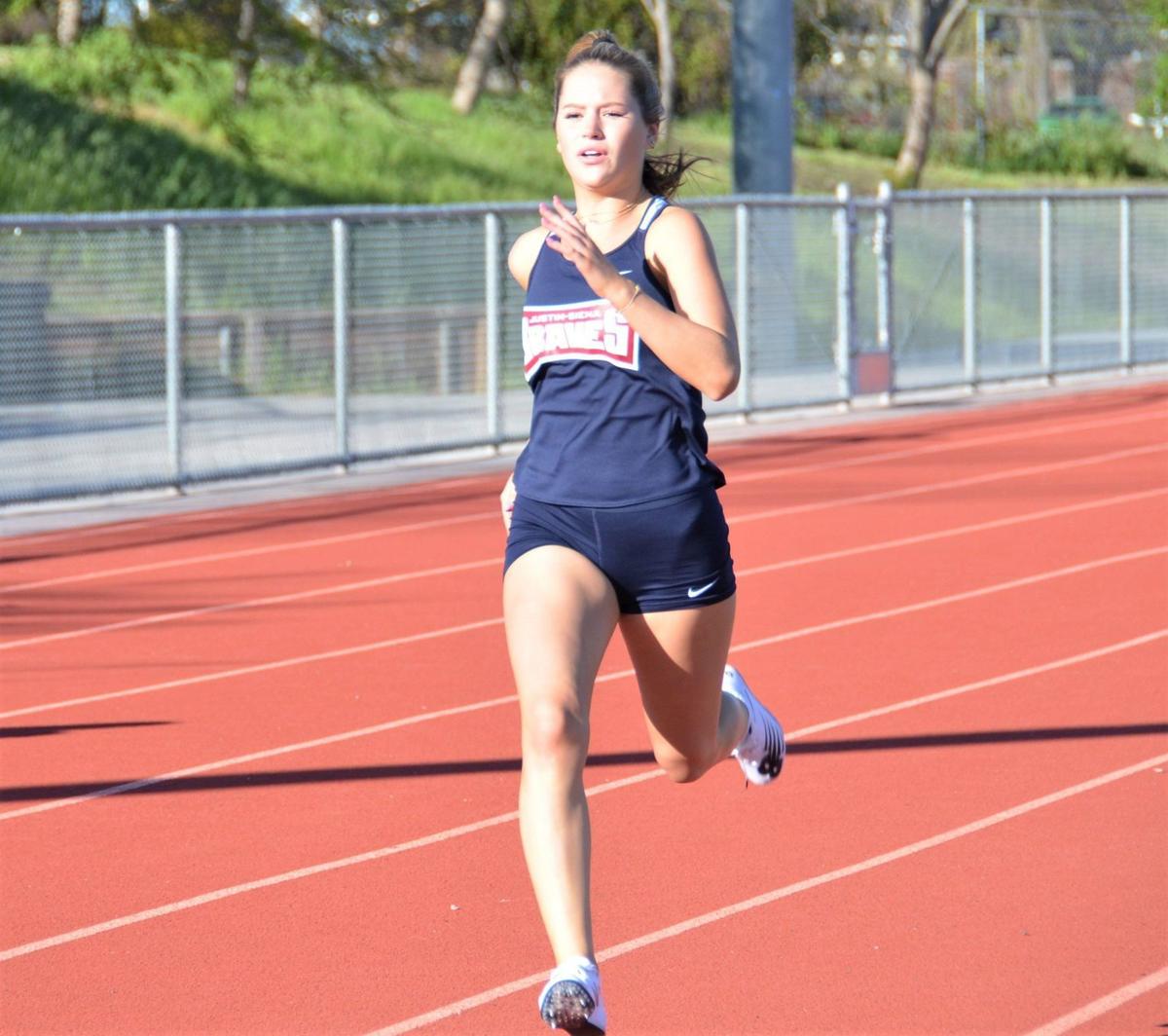 Justin-Siena's Roses Newell runs the varsity girls 400 meters in a home meet against American Canyon and Casa Grande on March 11. 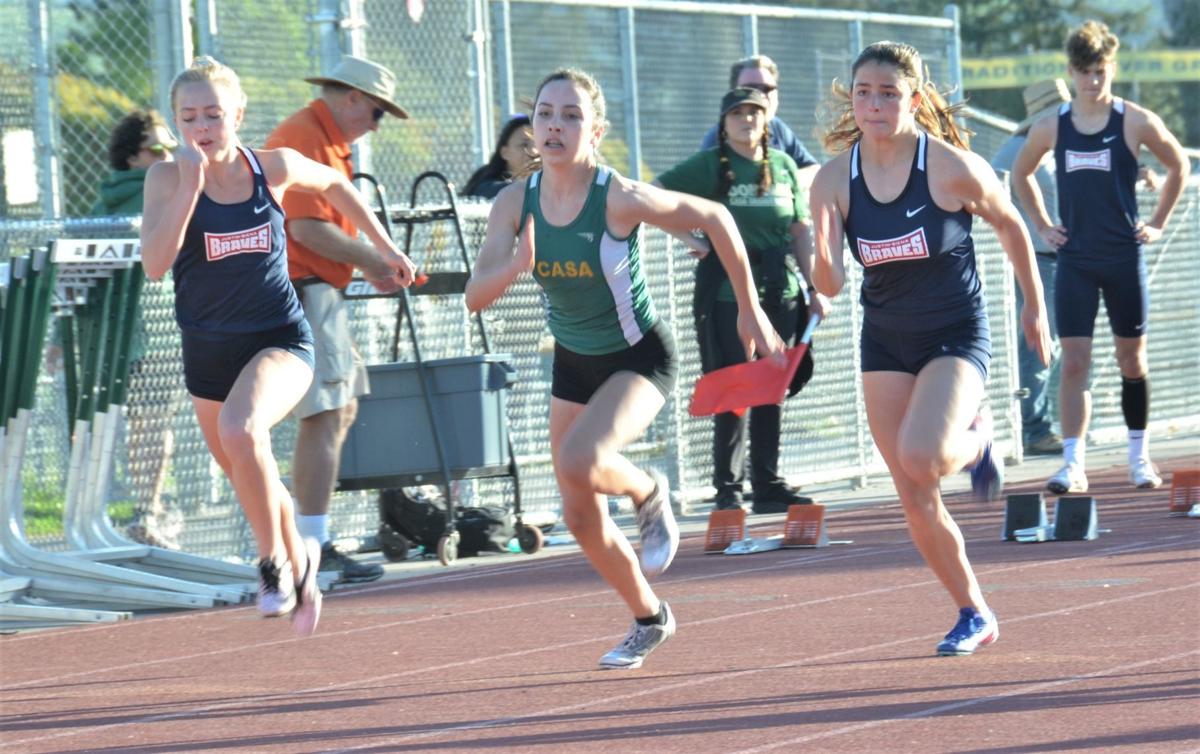 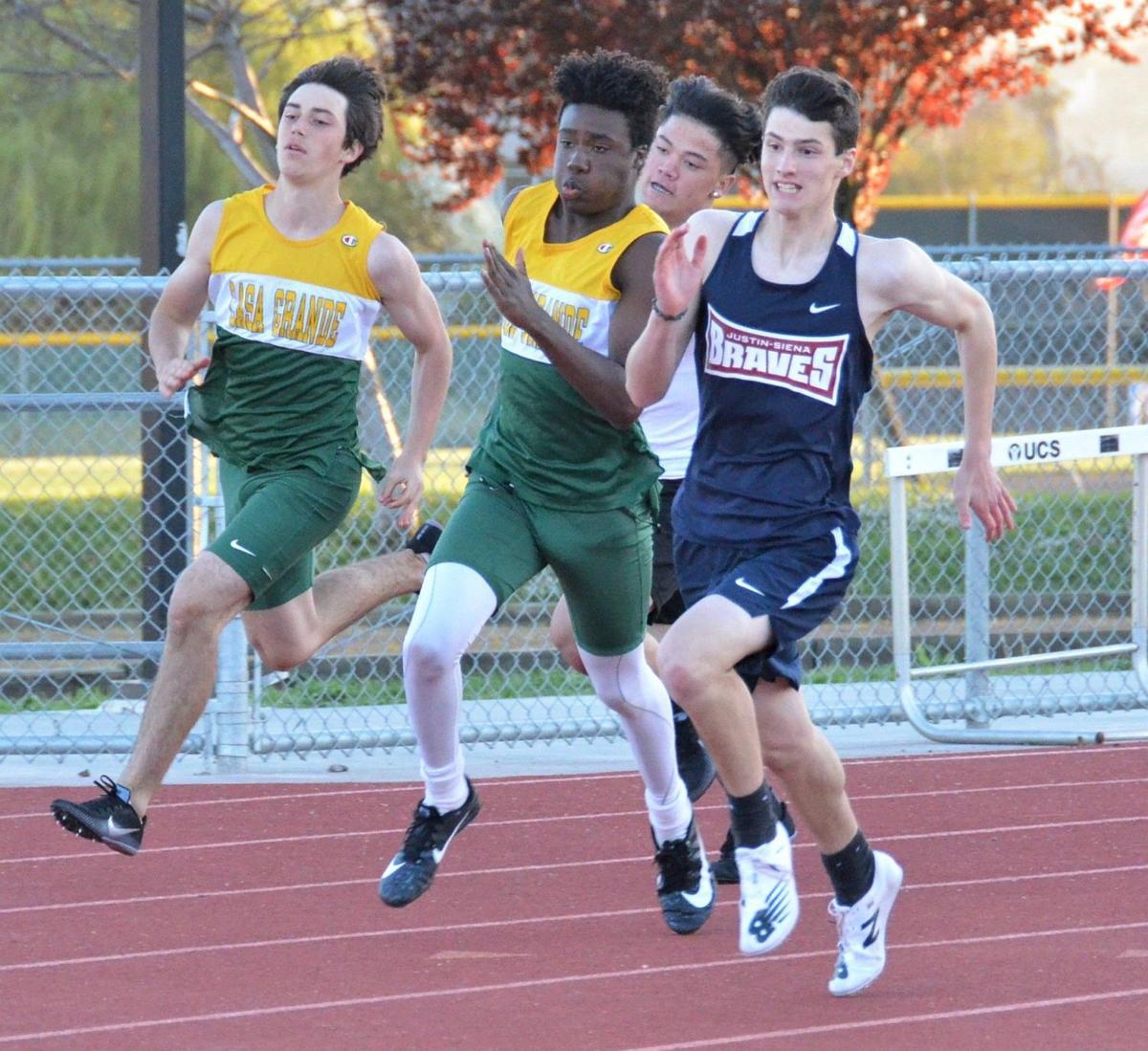 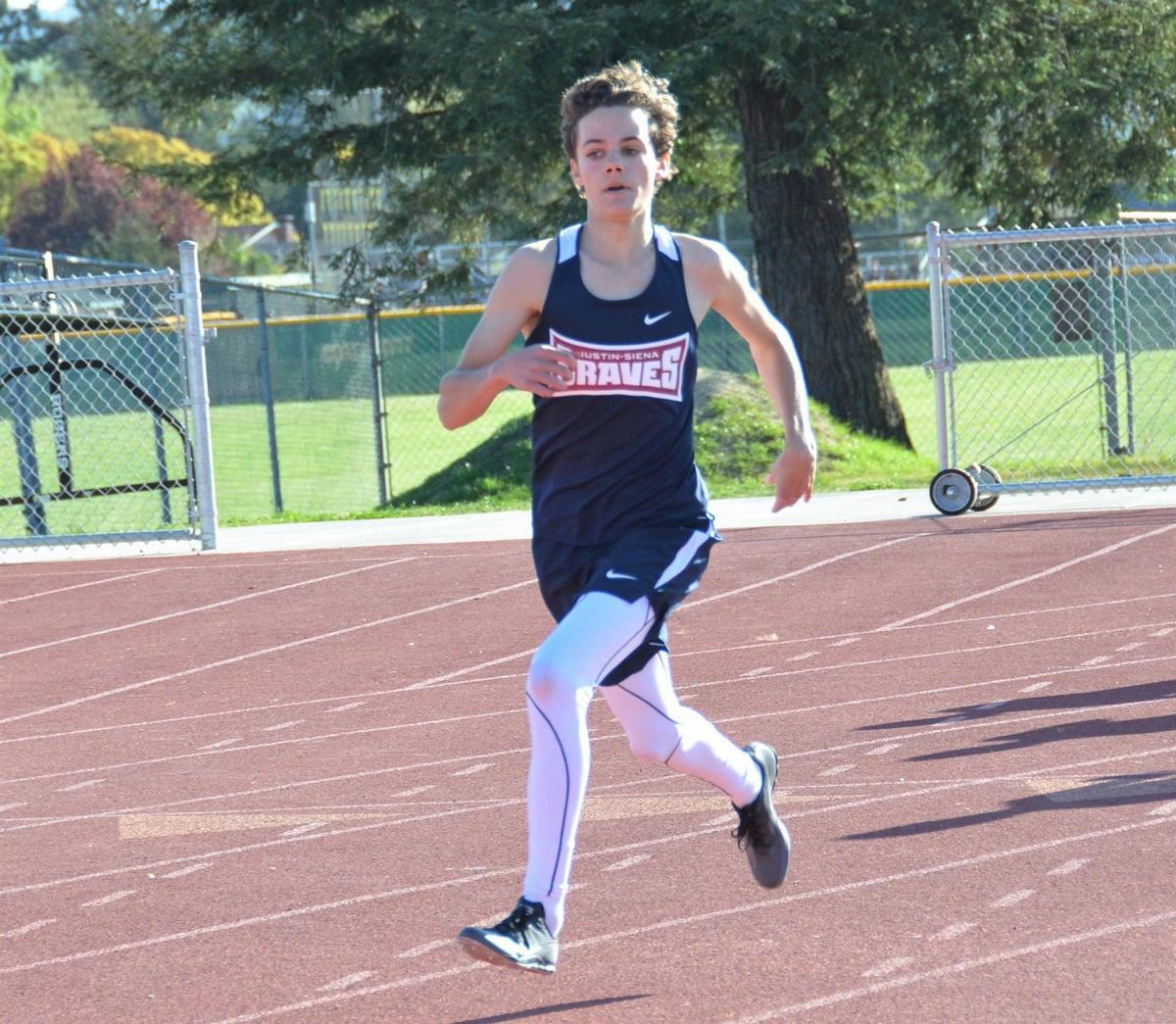 Justin-Siena's Henry Boeschen rounds a turn in the JV boys 400 meters against visiting American Canyon and Casa Grande on March 11.

The Justin Siena track and field team did not know its season would be suspended when it hosted American Canyon and Casa Grande in a Vine Valley Athletic League opener on March 11.

“We received official word that the season would be suspended to April 1 while at practice the day after the meet,” Braves head coach Tracy Martin.

That would have been next Wednesday. However, as of last Sunday, neither the California Interscholastic Federation nor North Coast Section had decided whether or not to cancel spring sports playoffs. The Napa Valley Unified School District said it expects classes to resume April 13 but will “continually assess the conditions to determine the best time for reopening schools.”

For now, Justin-Siena track and field is in the same holding pattern.

“We had great team energy at the (March 11) meet, so changing gears like that was hard for everyone. Our whole team was really disappointed,” Martin said, “as it canceled our regular-season practices and competitions in that time frame, and also our travel meet to Santa Barbara.”

For the second year in a row, Justin-Siena had planned to take 55 of its 90 athletes to Santa Barbara City College for the Easter Relays invitational. Two former Braves track standouts now competing for UC Santa Barbara, 2018 graduate Kendall Martin – Coach Martin’s daughter – and 2019 grad Landon Mispagel, who won the 100 hurdles at the meet last year, were to visit with the Braves.

That was sure to be exciting for all involved. Now the Braves can’t even get together in Napa.

“We did immediately encourage them to stay fit on their own at home, reminding them that track and field is like a big fitness class in many ways,” Coach Martin said. “Through practice, they have been shown the value of various types of interval training, body weight strength work, and core exercises. A pair of running shoes is all that’s really needed to maintain things. We have since posted a number of things to support their at-home routines.”

She noted that the Braves’ larger-than-usual team features several new and younger athletes this year, with standout talent in many events across the varsity and junior varsity divisions.

“Thankfully, many confirmed their goals by solid marks in our first meets, and they remain eager to get back to things in one form or another,” she said.

“Blake has great speed in both the 100 and 200 meters and is our 4x100 relay anchor,” Martin said. “Solomone’s very powerful start in the sprints and relays is already winning races and setting him up for a fantastic season. Matthew is a force as our third relay leg and is a sprint specialist, and Claire continues to be an athlete we could use in six different events, with talents in the sprints and in the field.”

Other standouts include sophomore Sydney Thweatt, the school record holder in the girls 400 meters and reigning VVAL champion in the 200 meters who has added the 300 hurdles to her event list, and Casey Potrebic, who had a strong start to his junior season with a league-leading height in the pole vault of 13 feet, ½ inch, notching personal records in that as well as the 200 and 400 meters.

At the March 11 meet, the Braves’ varsity boys finished behind Casa Grande and American Canyon in team scoring, but dominated in several events.

Their 4x100 relay team of Caden Parlett, Miles Martin, Eric Gutierrez and Cole Chatagnier beat both opponents in a season-best 46.4 seconds. With a time of 12.0 seconds in the 100 meters, Miles Martin edged runner-up Parlett (12.0) and Chatagnier (12.2) at the finish line. Martin also won the 200 meters overall (25.2), with Jacob Wood taking second (25.8) against American Canyon and fourth against the Gauchos. Chatagnier won the 300 hurdles with a very fast PR (43.8) that leads the league.

Priyanka Shanker placed first and Grace Grimshaw took second in the long jump, and Sophia Granko won both the shot put and discus.

Shanker, a sophomore who won the VVAL girls tennis singles title last fall, had her freshman tennis season cut short during the NCS playoffs due to unhealthy air from wildfire smoke in 2018. Thanks to COVID-19, it could happen much earlier this track season.

“While our athletes understood the bigger picture of protecting themselves, their families and the community, they were worried about what may happen with the remainder of the season,” Coach Martin said. “We told them we would do whatever we possibly could within the school and health-related guidelines to return to the track when allowed.

“I really appreciate these athletes, their high effort and their determination. I already miss watching them progress at practice and meets.”

Karolina "Karlie" Wells, today's Senior Spotlight subject, has been a staple of the Justin-Siena girls lacrosse program since she was a freshman. The three-sport athlete was voted the Braves' team captain this spring.

Justin-Siena's Blake Hoban rounds a turn in the varsity boys 200 meters against visiting American Canyon and Casa Grande on March 11.

Justin-Siena's Roses Newell runs the varsity girls 400 meters in a home meet against American Canyon and Casa Grande on March 11.

Justin-Siena's Henry Boeschen rounds a turn in the JV boys 400 meters against visiting American Canyon and Casa Grande on March 11.