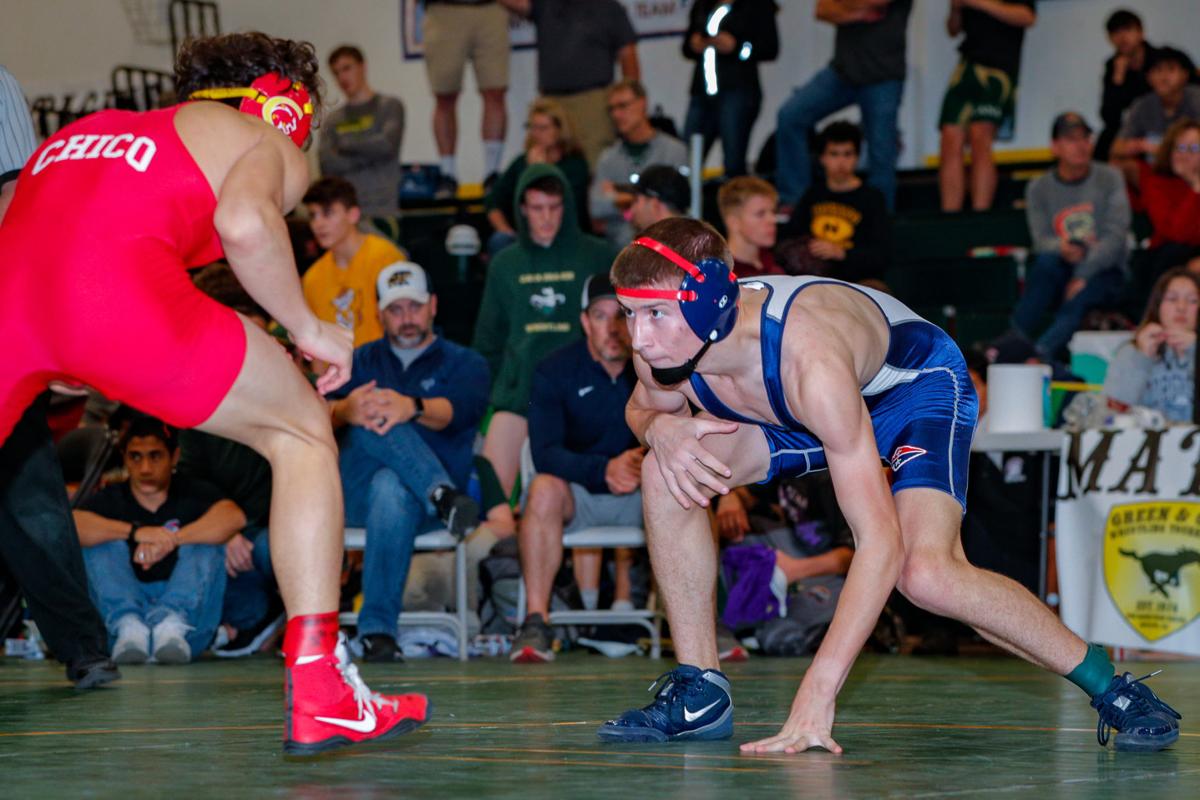 Justin-Siena's Jacob Guiducci, right, gets ready for the start of his 132-pound final against Chico's Rieker Pineda on Saturday at San Marin's Green & Gold Invitational in Novato. 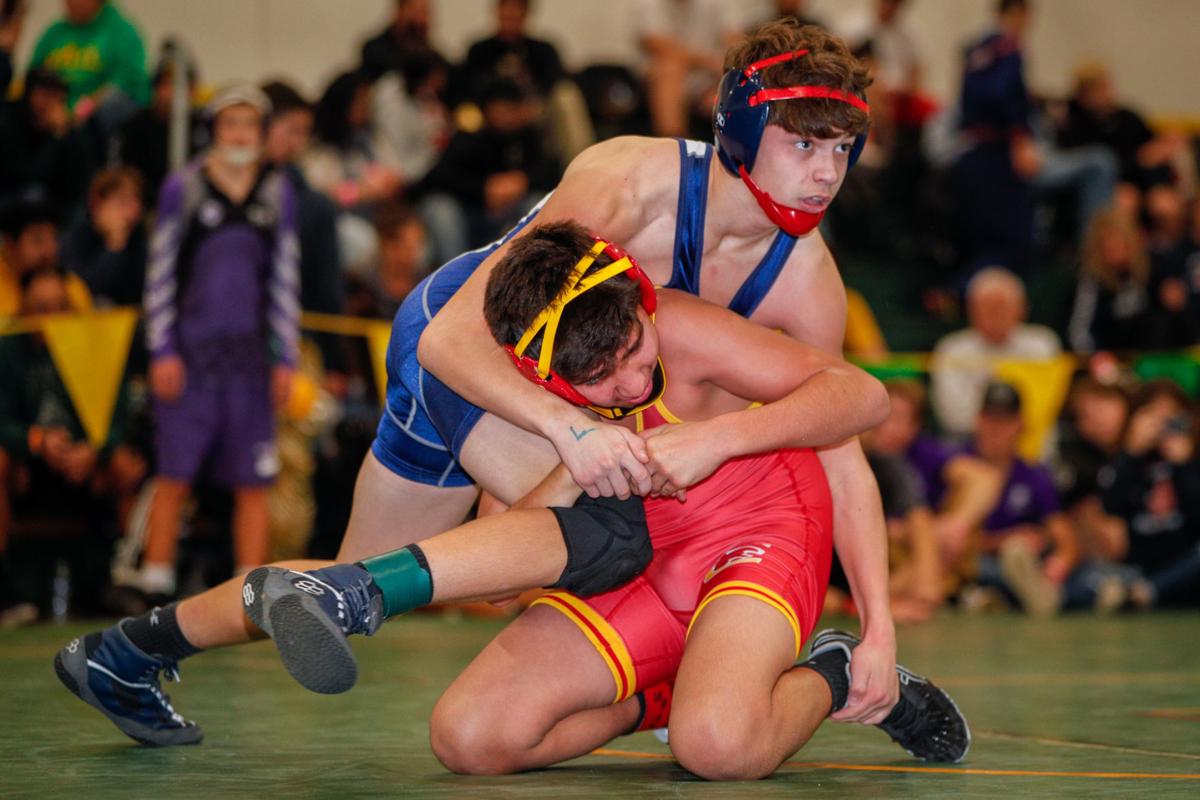 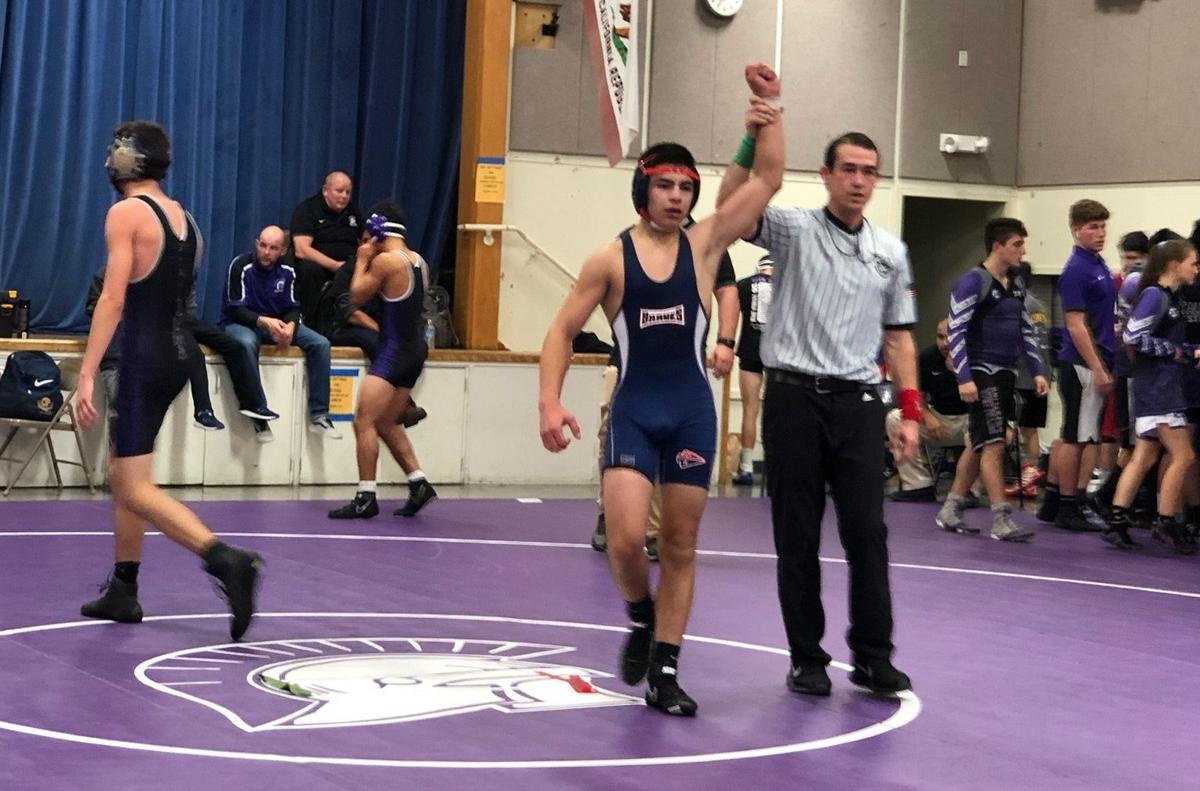 Justin-Siena's Sebastian Medina is declared the winner of his match by the official during Tuesday's match at Petaluma. 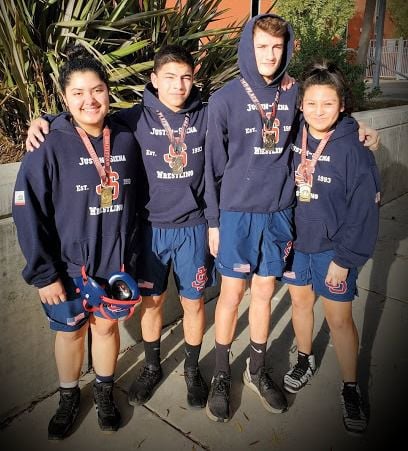 When Jason Guiducci took over the Justin-Siena wrestling program in 2014, sons Jacob and Brandon were fourth- and sixth-graders who tagged along as the sport’s version of bat boys.

They spent eight years competing together for the Napa Sheriff’s Activities League Wrestling Club coached by Guiducci’s longtime friend from the Napa High Class of 1992, Deputy Jesse Ward, his assistant coach at Justin-Siena.

They are finally reunited on their father’s team, with Brandon complementing his brother and three other returning North Coast Section Championship qualifiers on a solid roster.

“It is great having them on the same team once again, for many reasons,” said Coach Guiducci, who has coached Vallejo’s Springstowne Academy youth wrestling team for more than two decades. “As coaches it makes our jobs easier, as their experience is something their teammates can rally around. On a personal level, it is fulfilling to finally be able to coach them, to spend time with them. Many years have been spent coaching hundreds and hundreds of kids. It is a gift to be able to share this time with my sons.”

Guiducci and Ward are joined on the coaching staff by Rob Cohee for a second straight year.

“Both these boys will be missed,” Coach Guiducci said. “We’ve battled a lot of attrition, so when a kid matches your commitment and finishes their career, that kind of loyalty leaves an imprint on your soul for good.”

Along with two-time section qualifier Jacob Guiducci, returning are sophomores Cooper Cohee and Caden Parlett, each of whom reached sections last year, and senior JP Negueloua, a NCS qualifier in 2018.

“We have a pretty strong foundation with these four kids returning,” said Coach Guiducci. “There is a quote we often reiterate, ‘80% of success is showing up,’ and, my, do these boys ever show up. They show up whether it is to practice, to compete at tournaments, or by putting in time in the offseason at camps, weight-training or running. Their success is directly linked to showing up and it is becoming infectious.”

Along with Brandon Guiducci, the team’s key newcomers are fellow freshmen Kai Hoffman, from Napa’s Avengers Wrestling Club, and Evan Smith, who wrestled for Adele Harrison Middle School of Sonoma.

Coach Guiducci is hoping they will give Justin-Siena chance at its first-ever Vine Valley Athletic League dual meet win.

“Having three incoming wrestlers with competitive experience is a first, and a much-needed boost, as a number of programs in the VVAL have middle school feeder programs,” the coach said. “Sonoma has two middle school feeders, the Petaluma schools each have one, and the Napa SAL sees almost all their kids go to Napa Unified schools. This trio has also been instrumental in helping bring our other freshman along with many of the basic skills they have yet to learn.”

“Last season had its ups and downs,” he said. “We picked up a few nonleague wins that showed we are headed the right direction – including a win over Bethel, which was the Tri-County Athletic League champion – and we were pleased to rise to the top of the NCS as the Division III Scholastic Champions (top team GPA).”

Not every underclassman on last year’s team came back, however,

“Sadly, we still have too many individuals who are hanging up their shoes too soon,” Coach Guiducci said, “but the ones who survived our first VVAL season are primed for some big things this year.”

Negueloua, who transferred to Justin-Siena after wrestling his freshman year at Malden Catholic High in Malden, Massachusetts, looks to return to the section meet.

“JP is a dedicated young man with an unmatched passion for wrestling,” the coach said. “He immediately stepped up to lead this team this year and we are better because of him.”

The Braves’ staff is exuberant about the return of two female wrestlers, sophomores Star Gil and Ya-Ya Martinez. But they are left scratching their collective heads as to why the girls wrestling boom has yet to infiltrate the campus at 4026 Maher St.

“Our entire staff are huge advocates of girls wrestling,” Jason Guiducci said. “Both Coach Ward and I have developed two of the top girls youth programs around (Springstowne and Napa SAL) and Coach Cohee’s own daughter is an up-and-coming wrestler. The support is there. We have all seen the impact the sport offers females and our program is an inclusive community for girls, yet we’ve only had four step on the mat for us since taking the program over in 2014-2015.”

For the second summer in a row, a handful of Braves have traveled the country to various wrestling camps to hone their skills. Nico Minardos and Negueloua attended the Oklahoma State Cowboy Wrestling Camp, Cole Chatagnier went to University of North Carolina’s Tarheel Camp, and Cooper Cohee, Brandon Guiducci, Jacob Guiducci and Parlett traveled to West Point for the Army Ranger Camp.

“We as a staff couldn’t be more pleased with the level of commitment it takes to attend camps such as these,” said Coach Guiducci. “The wrestlers who have gone to camps have made incredible strides and brought back a treasure trove of knowledge to share with their teammates.”

A look at one of the Napa Valley's high school wrestling programs, Vintage.

The American Canyon wrestling team is so young, its two returning North Coast Section Championship qualifiers are only juniors.

Justin-Siena's Jacob Guiducci, right, gets ready for the start of his 132-pound final against Chico's Rieker Pineda on Saturday at San Marin's Green & Gold Invitational in Novato.

Justin-Siena's Sebastian Medina is declared the winner of his match by the official during Tuesday's match at Petaluma.