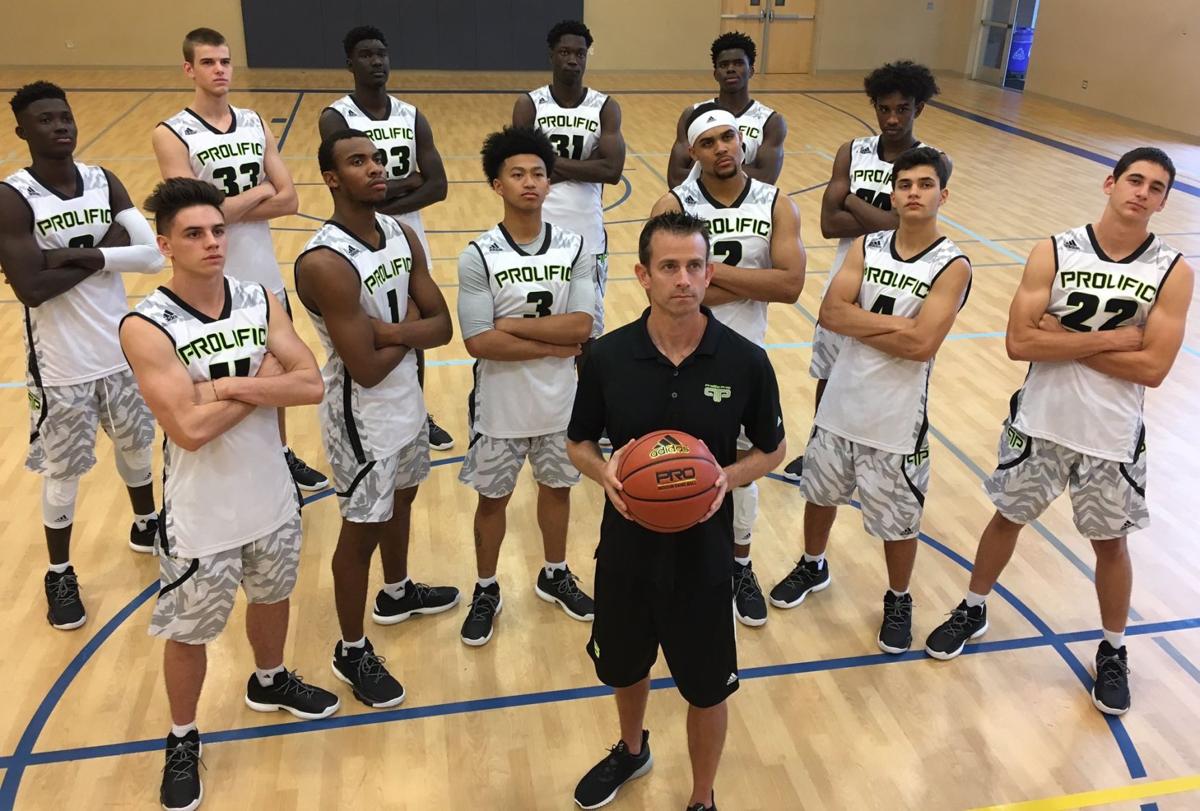 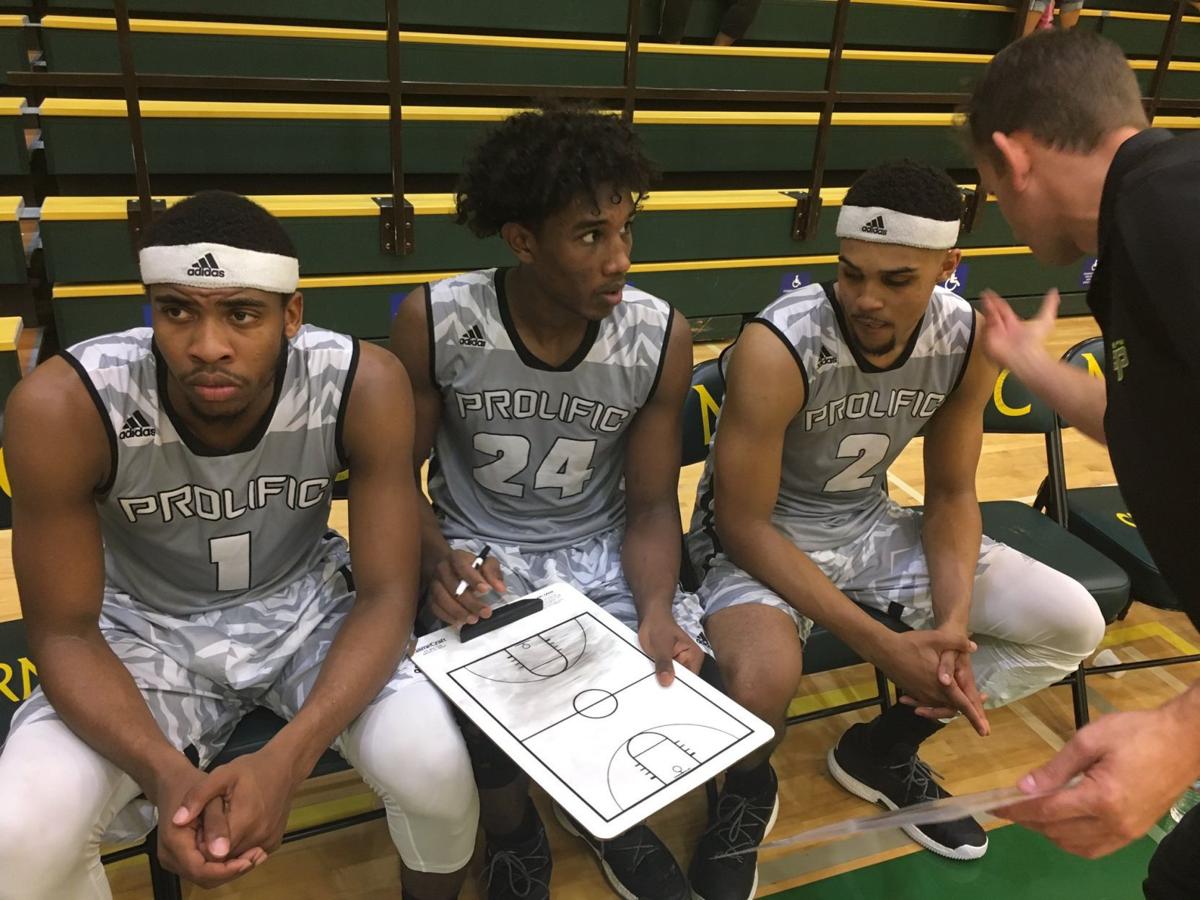 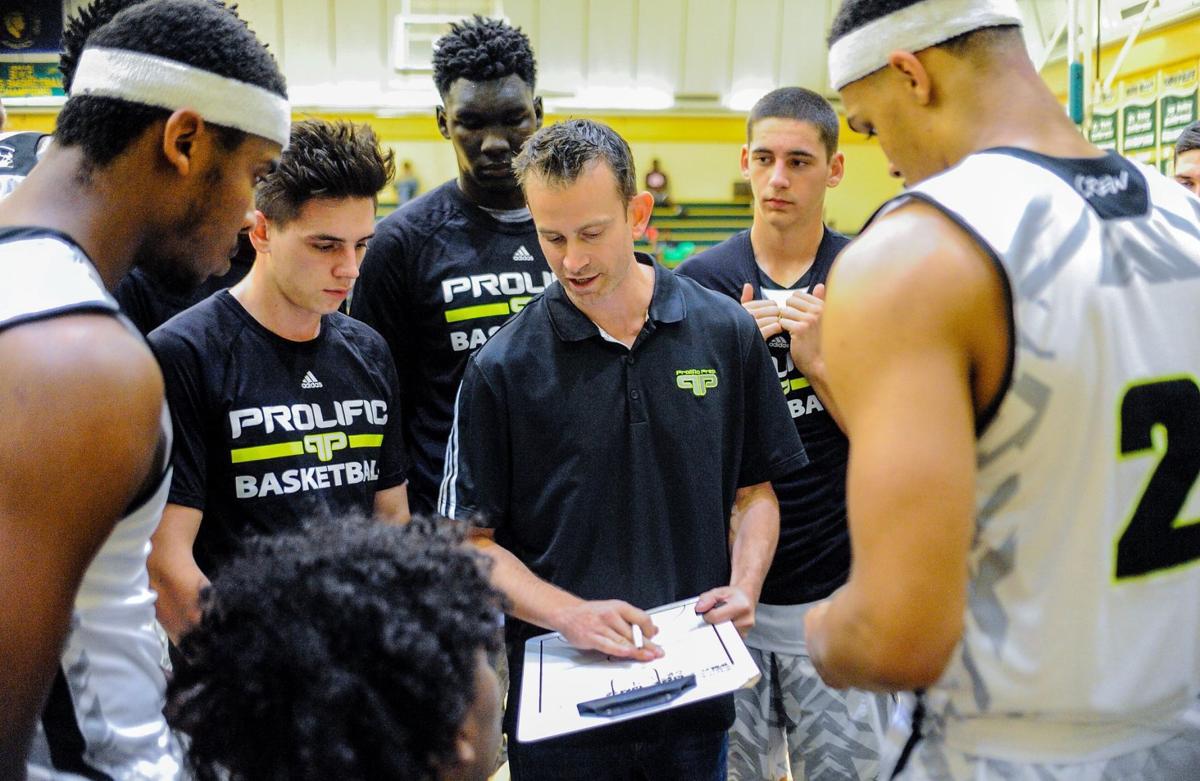 Prolific Prep head coach Billy McKnight talks to his players during one of their recent home games at Napa Valley College.

Prolific Prep is once again loaded with talent and the Crew look to be on the edge of something special this season.

The MaxPreps preseason top 10 independent rankings have the Napa-based high school boys basketball academy No. 4 in the nation to start the season.

For the second consecutive year, the Crew will be a part of the Grind Session, a weekly showcase of the top teams in North America. Prolific Prep will travel non-stop this year, with showcases as far away as the Bahamas, Toronto, New York and Arizona.

After losing Josh Jackson, the No. 1 high school basketball recruit in the country, to Bill Self and Kansas, one might expect the Crew to take a step backward. Instead, with the development of young post players and the addition of an explosive backcourt, Prolific Prep has the potential to top last year’s squad, which made it to the Grind Session national semifinals.

“I think this year we have a good chemistry team,” power forward Nathan Mensah noted, “I think we can win the whole thing (and) I want us to win the Grind Session National Championship.”

If the Crew are to achieve a deep postseason run, Trent Jr. will be one of the main reasons. The recent Duke University commit is currently ranked by ESPN as the No. 8 player in the class of 2017. The 6-foot-6 five-star recruit averaged 26.7 points per game last season at Apple Valley High School in Minnesota.

“Everyone has the same goal here,” Trent Jr. said. “Everyone came here for a purpose. Everyone just wants to get better.”

Another newcomer for Prolific Prep this year is Indianapolis native Paul Scruggs, a senior four-star Xavier commit ranked 28th overall in the 2017 class by ESPN. The 6-foot-3 point guard also has an advantage over most of his opponents in that he not only is quicker than most guards but, with a wingspan of 6 feet, 10 inches, also has the length to outrebound some post players. Scruggs will man the backcourt with Trent Jr. and returning sophomore point guard Pierre Crockrell Jr.

Crockrell Jr., from Tacoma, Wash., holds offers from University of Pacific and Montana and has serious interest from multiple Pac-12 schools.

“As a freshman last year, I got to play with the No. 1 player in the country and that had my confidence up high,” the three-star recruit said. “Now this year with Gary, Paul and Abu (Kigab), we have three more guys that I get to play with that are really good.”

A key returner for the Crew is Kigab, a senior Oregon commit who rapidly expanded his game over the summer. Last season, the small forward was an energy guy who caught the eye of many college coaches and scouts with his potential. The four-star prospect has added a jumper and 3-point shot to his evolving set of skills, and is now considered the fourth-best prospect coming out of Canada in the 2017 class. Kigab gives Prolific Prep one of the best and deepest backcourts in the country, with his ability to play point guard through power forward.

“I think this is really going to be a good season,” Kigab said. “I made a lot of strides over the summer. This is definitely a different team than last season.”

Last season, with the Crew’s entire frontcourt being sophomores, the young post players were thrown into the fire of the Grind Session while dealing with injuries. With a year under their belts, three juniors will look to turn last season’s weakness into one of Prolific Prep’s biggest strengths.

“If we can perform at our peak level, I will be very happy,” Prolific Prep head coach Billy McKnight said. “A lot of people think that peak is really high, but I just want to see us improve and get these guys ready for college.”

Mensah was injured most of last season, but the 6-foot-11, four-star prospect emerged this summer as one of the best center prospects on the West Coast.

The junior finished among the top 60 players at the Pangos All American camp in Southern California, an event that boasted more than 350 of the best players in the country. Mensah currently has offers from Oregon, San Diego State and Santa Clara, and interest from Pac-12 and West Coast Conference schools. A major talking point at the camp, and one that caught the eyes of scouts was Mensah’s wingspan, with the post player measuring in at an impressive 7 feet, 5 inches.

“I feel I will be able to use my height and wingspan to block shots,” Mensah said. “Staying at Prolific Prep has really helped me play against the best players and develop.”

Brown Eyisi of Nigeria is looking to bounce back from his first year with the Crew. The 6-foot-9 power forward showed flashes of brilliance last season, though played sparingly due to injury. The four-star junior has received interest from LSU, UC Berkeley and many Ivy League schools. Like Mensah, Eyisi has an advantage in the length department, with a wingspan of 7 feet, 3 inches.

“We have a lot of chemistry right now on this team. We all bonded quickly,” Crockrell Jr. said. “This year we are like brothers and hit it off right away.”

Finishing out the trio of big men is Amadou Sow. Originally from Mali, the 6-foot-8 four-star recruit is starting his third year at Prolific Prep. If Sow continues with the Crew next season, he will be the first four-year member of the academy. Sow has received interest so far from Oregon, Gonzaga and other West Coast schools.

“I think our young big guys Nathan, Amadou and Brown have improved way beyond where they were at last year,” McKnight said. “Bringing in Paul and Gary, to go along with Pierre, we are going to be able to pass the ball and move the ball.”

There are two more players on the roster that could grow into regular contributors for the Crew. Oton Jankovic of Croatia is an athletic small forward who just moved to Napa a month ago and is adjusting to the playing styles of American basketball.

“I was shocked when I came over here. They play the game so much faster over here,” he said. “In Europe they slow the game down on offense, but in America it is go, go, go.”

Jankovic was a part of the Cibona Zagreb youth system in Europe, and turned down a pro contract in Europe to come to Prolific Prep. It is not common for young European talent to come to America for high school and college, but the ability to play against top American talents was a big factor in Jankovic coming to the Crew.

“Being here for just a month has made me so much better already,” he said. “It is so inspiring to hear that Gary is one of the top players in his age group and I get to play against him on a daily basis at practice.”

Sekou Toure missed most of last season with a major knee injury, though it is hard to tell with the athletic 6-foot-4 combo guard always sporting a wide smile. The junior has the potential to fit Kigab’s role from last season, an energetic glue player with major upside.

“I have been working so hard for this time. This is my life. I am so happy,” Toure said with a smile. “Two years ago, I was back in Africa dreaming to come to over here. It is a blessing to be able to travel around the country playing basketball.”

After opening its season with games the last two weekends at Napa Valley College, Prolific Prep isn’t scheduled to play at home again until the end of January when, for the second straight year, the Crew will host a Grind Session event.

Last year, Thon Maker was a part of the showcase. The 7-foot-1 center skipped college and was drafted 10th overall by the Milwaukee Bucks. Other notable prospects from last year were DeAndre Ayton of Hillcrest Prep, who is ranked as the No. 1 overall prospect in the 2017 class and is committed to Arizona.

“The Grind Session is the best league. You can’t hide from it. Every week, you are playing a top player in the country,” Crockrell Jr. said. “I wasn’t used to playing against that level of competition, but it made me into a much better basketball player.”

Prolific Prep head coach Billy McKnight talks to his players during one of their recent home games at Napa Valley College.